Product: The Sims 4
Platform:PC
Which language are you playing the game in? English
How often does the bug occur? Every time (100%)
What is your current game version number? 1.68.154.1020
What expansions, game packs, and stuff packs do you have installed? All of them, except the Star Wars: Journey to Batuu Game Pack.
Steps: How can we find the bug ourselves? Use the Re-Traiting Potion to change a sim's traits.
What happens when the bug occurs? Old traits are removed from the Trait sub-menu of the Simology panel, but still show up in other household members Relationship and Conversation panels.
What do you expect to see? For traits not to show up on the aforementioned panels after being removed.
Have you installed any customization with the game, e.g. Custom Content or Mods? Never used.
Did this issue appear after a specific patch or change you made to your system? Neutral/Not Sure 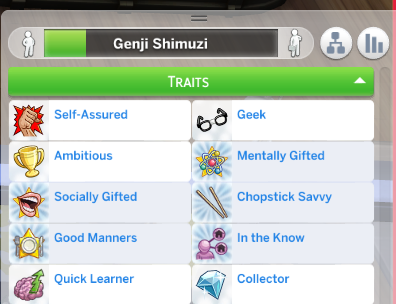 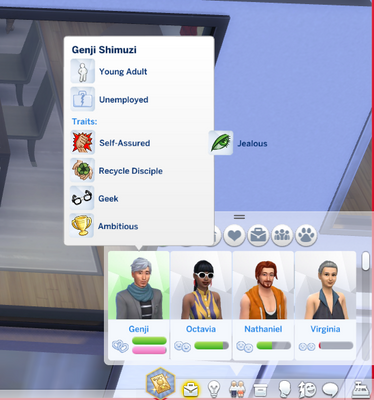 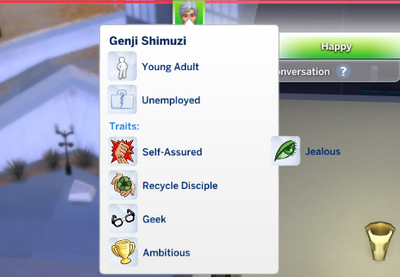 The sim currently has the Feeling Insecure moodlet, from the removed jealous trait, so this might be related to or the same issue/bug as this: LINK where removed traits still caused moodlets.

i've found that when Sims get new traits, others will need to find out what they are again, to replace the older ones. using 'get to know', 'discuss interests' or 'deep conversation' will make the new traits register on their panels.

@unseenlarks I've tried that; the new traits are registered, but it seems like other sims still "remember" the old traits as well.
Message 4 of 19 (2,159 Views)
Reply
1

@berrybutch--hm. i remember i had this issue with a stuck one for a few of my Sims, but quite a while ago. the old ones did go away eventually.

i do think this (or something similar) was reported before, not just the moodlets one you linked to... unfortunately i can't find it (i'm likely using the wrong terms to search) but @crinrict probably remembers what the thread was.

edit: tested again with more Sims, with traits that had been changed in CAS, and i can see this as well. before the patch, a Sim whose traits had been replaced with different ones would show only the updated ones in other Sims' panels. now, they have four traits. the previously used one is back.

hey, we did ask for more trait slots.

this issue seems to persist with the new profiles too. I removed 2 traits off my sims I think dance machine and family-oriented but then my sim showed with 5 traits instead of 3 as the prior 2 did not go away when removed. This was done with commands. I have found if you use the re-trait potion it seems to remove them properly.

@Abradley745 Using the re-traiting potion didn't work for me, maybe because I used it to remove the traits initially? And yeah, I've noticed it happens on the profiles now too.
Message 7 of 19 (2,112 Views)
Reply
1

Keeping this separate on purpose as this is new and the other was specific for toddlers.

Haven't had a chance to test this but I guess there's enough votes now to tag it.

hi @crinrict, no, i swear there was one for adults... eh, maybe i dreamt it.

but i guess it doesn't matter, because this one is totally different for me. i've checked a bunch of pre-existing Sims (with traits changed way before this patch, so everyone who knew them knew their three current ones) and they have four traits now. the removed one, which other Sims had 'forgotten' when they got to know the new one, is back.

@unseenlarks I think this was always only for toddlers but ..

Moodlets have been issues forever.