“If you define yourself by the power to take life, the desire to dominate, to possess…then you have nothing.”
- Obi-Wan Kenobi

With Obi-Wan Kenobi being present throughout the Star Wars saga, we’ve had no shortage of inspiration to draw from. But it was his skills with a lightsaber and his combat prowess, especially in defence, that we decided to focus upon.
It was important for us that when playing as Obi-Wan, not only would players feel like they are playing as the legendary Jedi Master, but it was also imperative that we capture the person that was often the leader on the battlefront and inspiration to the clones he commanded.

We wanted to capture the essence of Obi-Wan running head first towards a battalion of Droids, using his lightsaber to deflect blaster fire with perfect accuracy , which we see him doing in The Clone Wars™ animated series.

We also wanted to ensure that we captured his expertise as a Force user and we worked to ensure this was reflected within his ability set. We took inspiration from numerous sources, one of which was a battle against Anakin Skywalker. With both Jedi locked in a stalemate, one hand raised against the others. The use of the singular hand would play a key part in the animation on display with one of his abilities.

Another battle we took inspiration from was one such battle against General Grievous in which he finds himself backed up against a wall. With Grievous approaching, Obi-Wan unleashes a powerful Force Push, sending the General of the Droid army tumbling backwards.

It’s hard to talk about Obi-Wan without at least mentioning his penchant for using the Force to play mind tricks on his opponents so it was important that this aspect of his character was also present. His now iconic wave of the hand which has been seen throughout the Star Wars saga will be present in the form of his ability, Restrictive Mind Trick. 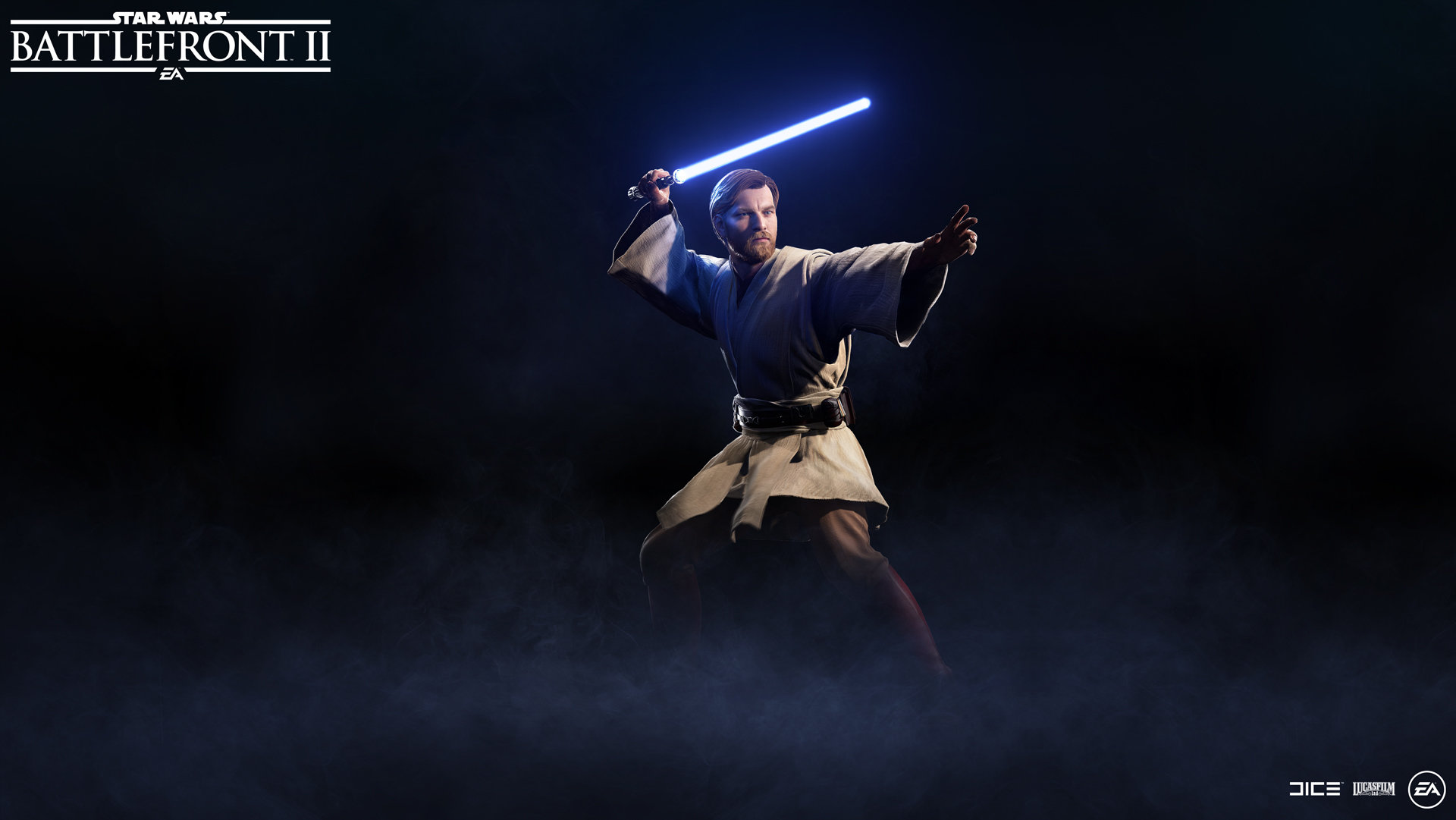 The traditional weapon of a Jedi Knight. It provides strong attacks and Obi-Wan will have the ability to deflect both lightsabers and blasters more effectively than other Jedi due to his increased stamina pool.

Obi-Wan will unleash a powerful Force blast in an area directly in front of him, damaging and sending his opponents tumbling backwards. This ability can be adapted based on the situation you find yourself in. Hold down the button to increase both the range and width of this Ability.

Obi-wan will rush forward swinging his lightsaber, deflecting any attacks and damaging enemies in front of him.

When used, all opponent abilities in front of Obi-Wan will be disrupted. During this time, no abilities will be available. This also includes dodges.

Name: Give it All
Effects: Increased range, decreased damage
Description: All-out Push has a longer range, but its damage is reduced.

Name: Think it Over
Effects: Increased effect
Description: Enemies are affected by Restrictive Mind Trick for a longer time.

Obi-Wan Kenobi will have two appearances when he launches. His default will be based on his appearance from Star Wars™: Episode III – Revenge of the Sith™

An additional Epic appearance will be available for either 40,000 credits or 1,000 crystals and will be based on his iconic Jedi Robes. 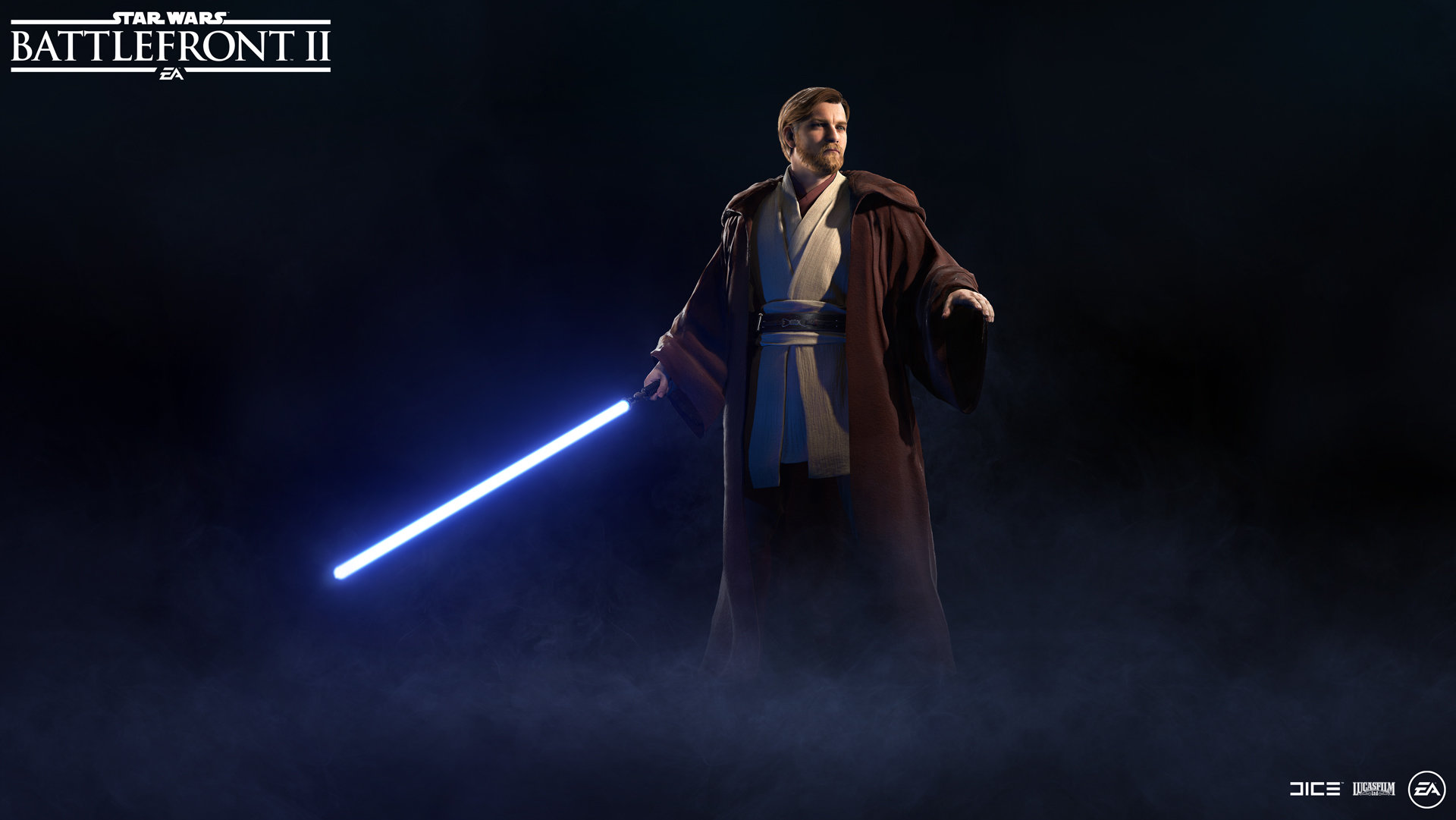 Where General Kenobi led, his loyal 212th followed. Led by Clone Marshal Commander CC-2224, also known as “Cody,” the 212th Attack Battalion was a formidable force that was assigned to Jedi General Obi-Wan during the Clone Wars. They were tasked with some of the most important missions needed by the Republic.

From the battles of Ryloth and Umbara to the invasion of Utapau, the 212th fought in some of the most difficult assaults of the Clone Wars. Their sacrifices were great and their losses were many, but in doing so they secured some of the most crucial victories against the CIS that led to the Republic’s superiority in the theatre of war.

When the tide turned and Order 66 was executed by the self-proclaimed Emperor, the 212th was also the cause of great damage to the Jedi and their allies. Turning on Obi-Wan Kenobi and joining the Imperial army, they were eventually deployed to Kashyyyk to help combat the fierce wookiee resistance as well.

However, before falling to Order 66, they were one of the most loyal legions in the Grand Army of the Republic, proving their valour time and time again. The strategic prowess and battle-hardened troopers of the 212th were some of the bravest and finest soldiers in the Republic.

We’ll be back next week with an overview of everything that’s coming in the Battle for Geonosis Update. The team is incredibly excited about Obi-Wan joining the roster of heroes in Battlefront II and as always, we can’t wait to hear your feedback below.