Incoming Transmission
Many of the Galactic Assault maps we have in the game conclude with final fights that takes place within relatively confined spaces.

The goal behind this is to create as much intensity as we can. We wanted the final stages of a map to feel like all out warfare. This has been achieved by us creating scenarios that caused both attackers and defenders to funnel into one final fight location.

We have seen feedback that our community would like us to try and do less of this and instead end with something more open. We have experimented with this already and the final part of Kessel (Extraction) is a good example.

For Geonosis, we are looking to take it a step further. The final two phases are very open, which makes it ideal for vehicular-based combat, and gives it its own identity and gameplay experience that is different from what is currently available within Galactic Assault.

The centerpiece of Geonosis is the AT-TE. This six-legged armored walker is fully controllable and plays a vital role on the battlefront.

One of the key differences between the AT-TE and any other vehicle in the game is that they are dynamically dropped in real-time into the playable space as the battle goes on. This creates a lot of interesting scenarios and we are excited to see how this plays out once Geonosis arrives later this month.

What this also means is that you will not be able to pick the AT-TE from the spawn screen. You will encounter them within the environment itself. One might be dropped in just ahead of you, or you might turn a corner to see one, ready and waiting for you to jump in.

RE-ACTIVATE A DAMAGED AT-TE
The first phase is very much focused on infantry combat with the Clones needing to call in reinforcements and re-activate a damaged AT-TE. During this phase, the objective of the Droids is to stop them.

This phase will take place in typical Geonosian canyons with plenty of pathways and cover available.

HARDCELL TROOP TRANSPORT
The second phase marks the shift from infantry to vehicular combat. With vehicles now coming into play, the tight canyons will give way to a vast battlefront, meaning a change in tactics and gameplay will be required.

However, they need to be weakened before serious damage can be dealt to them (similarly to walkers). This can be achieved by using the special ability of the AT-TEs. This ties into the overarching theme of Geonosis of the AT-TE’s being the cornerstone of the battle.

SECURE TURBOLASERS
The third phase is an all-out attack by the Clones. Their goal is to recapture some abandoned Turbolasers to take down the Droid Core Ship. During this phase, the Droids must do everything they can to defend the Turbolasers or loss will be imminent.
Gameplay-wise, this is a capture point, but with a twist.

As noted earlier, we didn’t want to create a narrow funnel towards the end of this battle, so this capture point is actually around 200 meters wide. You may be inclined to think that this could turn into an infinitely contested objective. To prevent this from occurring, the capture point can only be captured by the AT-TEs. In addition to this, the capture can’t be contested.

This creates a scenario where the Clones know that they need to escort their AT-TEs into the area, so they can capture it. At the same time the Droids can see these slow-moving giants’ approach from a distance and plan accordingly.

The intent here is to create the feeling of a battle where the game is not won or lost by a single person sneaking in and taking an objective. Rather, it’s an entire army moving forward and playing the objective together.

With the difference in objectives coming into play, we had to change up the way reinforcements work. 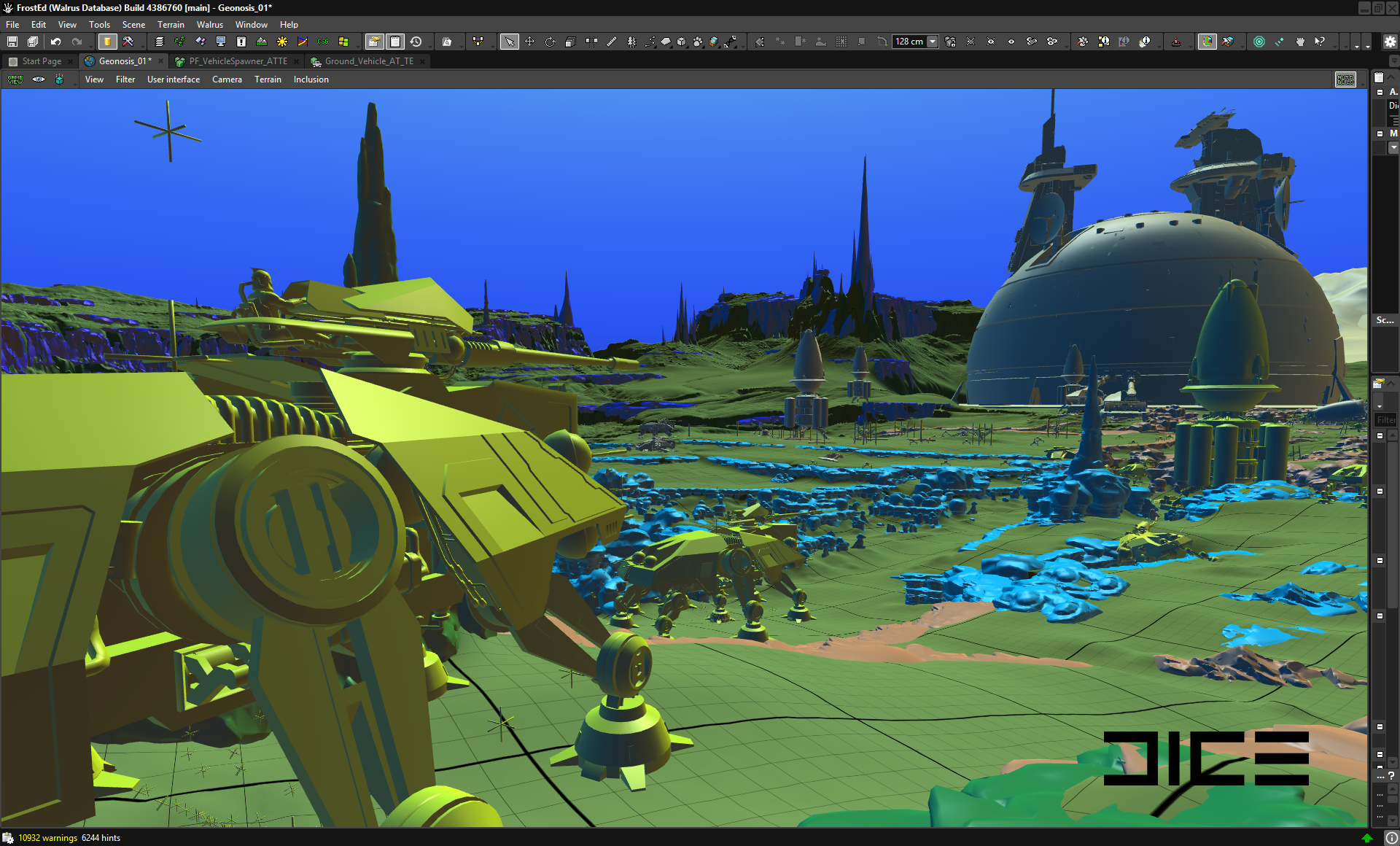 To give all Droids a chance to help, we use Missile Launchers (as seen in all other walker phases) in a slightly different way. There will be more of these available, the range much longer than normal, and the lock-on time very short. In addition to this, Droids won’t be marked while holding the launcher by the other team. However, they won’t make the AT-TE weakened, instead they just deal damage.

To bring this battle fully to life a lot of things are going on outside the playable space, something we’re calling the “Living World.”

Fighting through a dense sand storm is one of the most iconic scenes from Geonosis and something we really wanted to recreate.

The sand storm will occur during the transition from Phase 2 to 3 when the final Hardcell Troop Transport has been destroyed.

While fighting through the sand storm, visibility is heavily reduced and, even though you are fighting in a completely open area, you feel like it’s close-range gameplay. Running through the storm with blaster bolts flying everywhere is a great experience and definitely something which adds to the unique gameplay experience that Geonosis will offer. 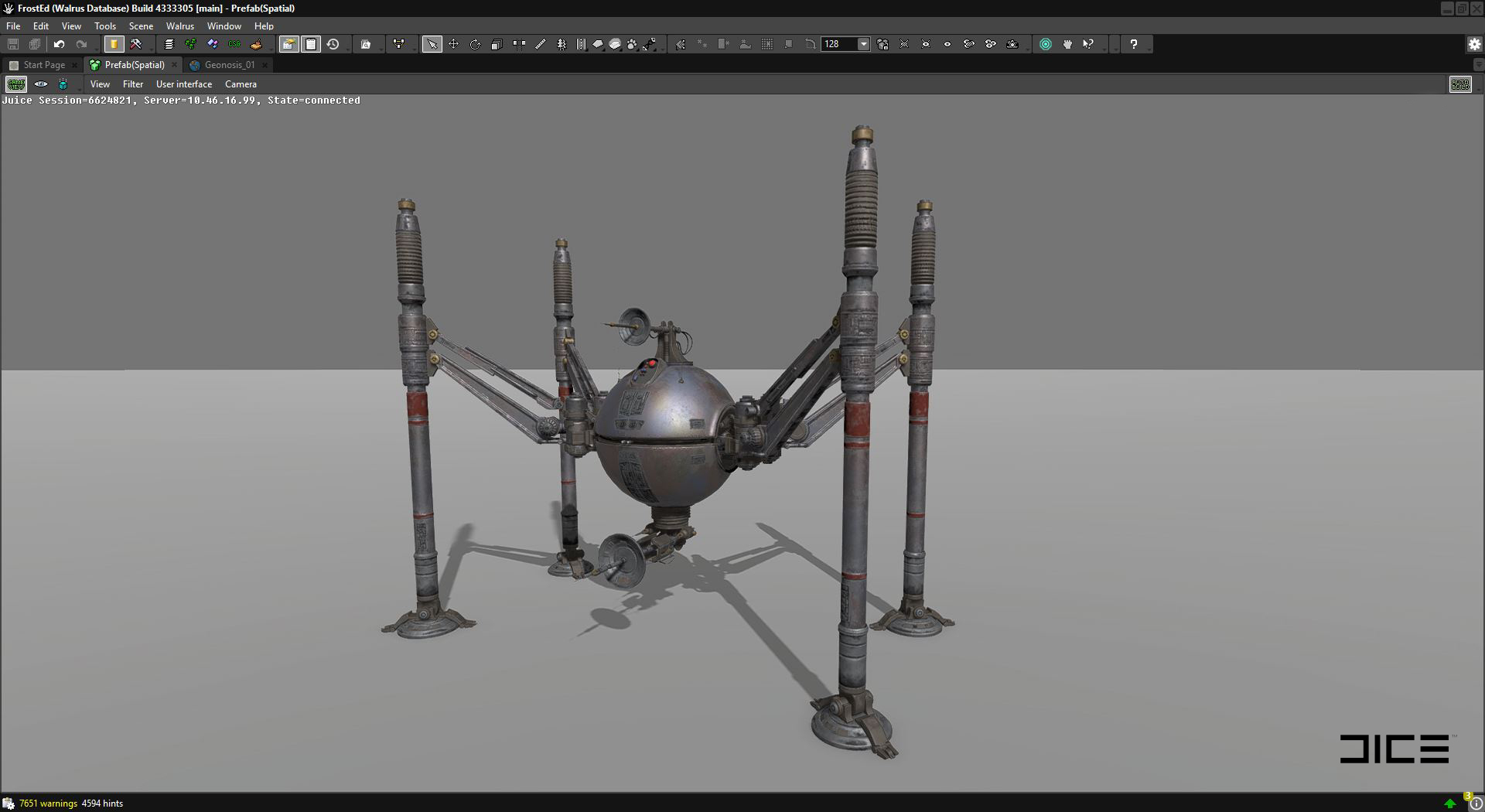 As the Clones fight their way towards the Turbolasers they will have to clear out quite a few Homing Spider Droids. These droids will deal significant damage to both AT-TEs and Troopers if not taken care of. Their presence means that the AT-TEs can’t just blindly keep walking forward towards the next objective.

Creating a new planet always brings its own set of challenges and Geonosis was no different. The main challenge for us was around the AT-TEs. We wanted the AT-TE to be ‘needed’ to succeed to create more team-play and focus the fight around these six-legged giants.

However, what happens if people don’t know how to weaken the Hardcells or don’t move forward during Phase 3?

Our User Interface and Voice Over lines play a vital role here. It’s something we have worked a lot on already and are still working on ahead of its release.

Looking at it from the Droids perspective, the same thing could happen. If no one is trying to take down the AT-TEs, then it will probably be an easy victory for the Clones.

While we have been playing Geonosis ourselves, we can never know for sure how battles will play out until it is released. Players will always find ways to play across planets in ways that we hadn’t thought of, but we will certainly be paying close attention and will adapt if things aren’t working as well as they should.

This is amplified somewhat by the change in gameplay compared to other Galactic Assault planets. However, we feel that changing the gameplay like this will add more value for our players than just making another ‘classic’ walker phase.

Geonosis will release later this month alongside the Battle of Geonosis update. We’ve got more to talk about, starting with vehicles and then onto Obi-Wan Kenobi himself. As always, please do leave your feedback in the comment threads below. We look forward to deploying onto Geonosis with you this month.

But one last thing…before we sign off we thought we’d give you a behind the scenes glimpse of some work in progress shots of Obi-Wan Kenobi.

An early test of Obi-Wan Kenobi's Idle Animation. Please note, that this is from early in development and when he arrives, he will be wielding his blue lightsaber.