Last week we talked about Geonosis and went into detail of what you could expect when the planet arrives later this month.

At the heart of the gameplay experience on Geonosis is the AT-TE, but it’s not the only vehicle that will be available to use across the harsh rocky terrain.

The All Terrain Tactical Enforcer, or AT-TE as it’s also known, is a heavily armoured vehicle used by the Grand Army of the Republic during the Clone Wars.

With six articulated legs and as the name would suggest, the AT-TE is great at traversing all types of terrain. This makes their deployment on Geonosis incredibly useful, as the arid, rocky landscape may sometimes be
too harsh for other vehicles.

Unlike other vehicles the AT-TE will not be available for Battle Points. Instead, they will be deployed dynamically across the planet.

If you’re playing as a Clone Trooper then the AT-TE will be key to victory as they are needed to capture the final objective. If you’re a Droid, you’ll be doing everything you can to destroy them, or face certain defeat yourself.

The AT-TE remains as one of the biggest off-rails vehicles we’ve ever built for Star Wars™ Battlefront II and we can’t wait to see them marching across Geonosian landscape. 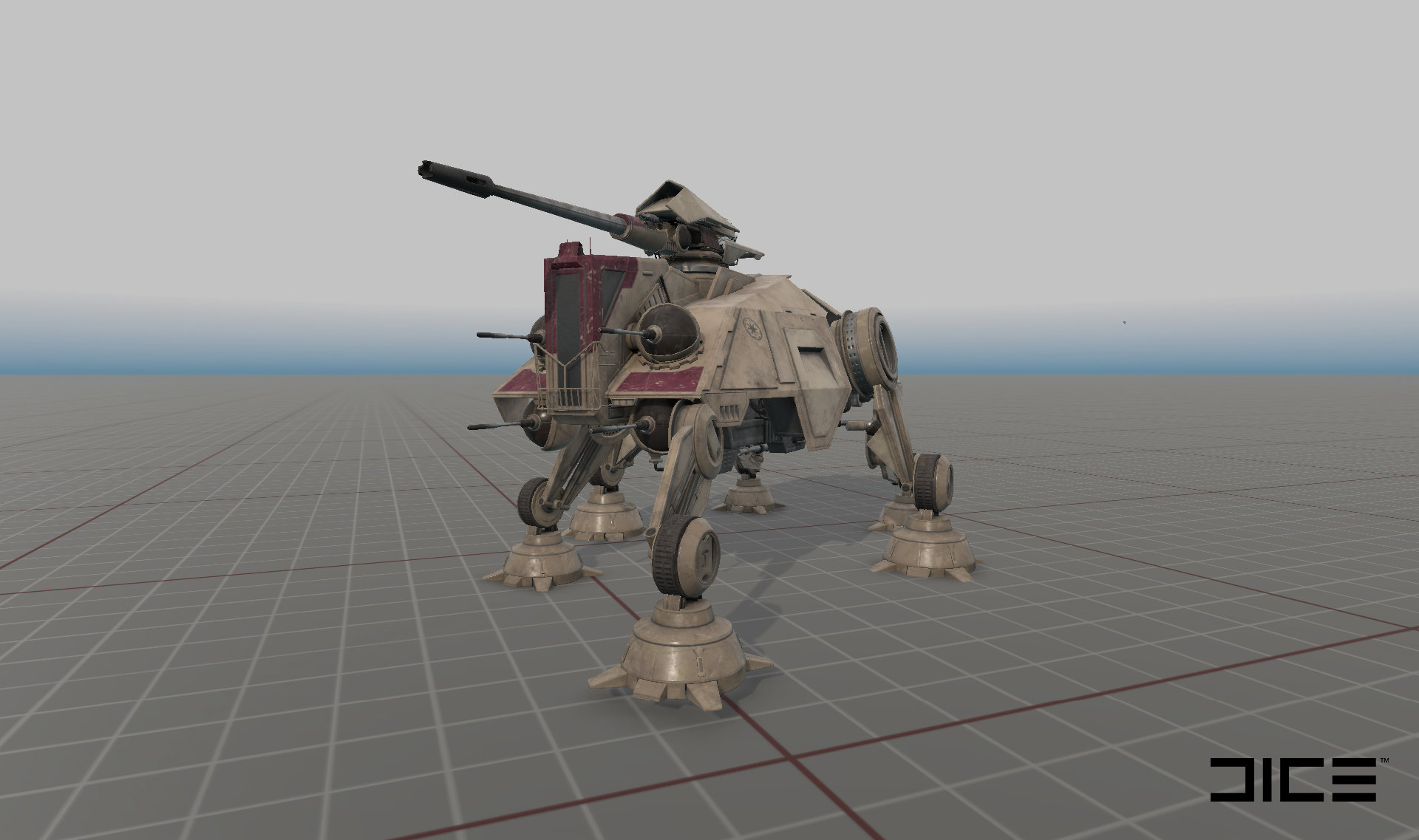 A work in progress look at the AT-TE

The four ball-turret laser cannons are the primary weapon of the AT-TE. They will fire in an alternate pattern and cause damage to anyone they hit.

This ability will fire the AT-TE’s main cannon causing damage to those in its blast range.

This ability will provide support to nearby clones. Not only with it refresh their abilities, but it will also scan the nearby vicinity for Droids.

The AT-TE transitions into Siege Mode allowing for Ion Charge to be fired instantly.

Ion Charge is used to disable the Hardcells so they can be damaged by other weapons, and does come with a long cooldown.

Clone Troopers will be able to spawn onto an AT-TE as they will count as an HQ in the spawn menu. You will encounter AT-TE’s across the battlefront and they will also be deployed via LAAT’s, meaning your spawn options are always ever changing.

The AT-TE is very resistant against standard blaster fire. However, Droids that are able to get close will be able to take advantage of softer armoured plating on the underside of the AT-TE, allowing them to do impactful damage. Clones will want to defeat any Droids that are near their AT-TE’s as soon as possible.

Slim and lightweight the Single Trooper Aerial Platform, or STAP is the perfect vehicle for Battle Droids. With good speed but great agility, a STAP will allow a Battle Droid to maneuver across a planet with great ease.
What they gain through agility they lack in durability and any Droid piloting one will want to evade fire as much as possible.

A work in progress look at the STAP

The primary weapon for the STAP comes in the form of the Light Blaster Cannons, dealing rapid fire damage.

Using this ability will detect all nearby enemies within close proximity to the STAP.

When used, the STAP’s primary will no longer overheat for a short duration of time, allowing for focused fire upon an enemy.

A rapid-fire burst of cannon fire that charges up and unleashes high damage onto its target.

Similar to the STAP, Speed and mobility are key for the Biker Advanced Recon Commando Speeder.
Fast and aggressive, the BARC Speeders will provide Clone Troopers with a great means of transportation across a planet, but they suffer from a lack of durability. 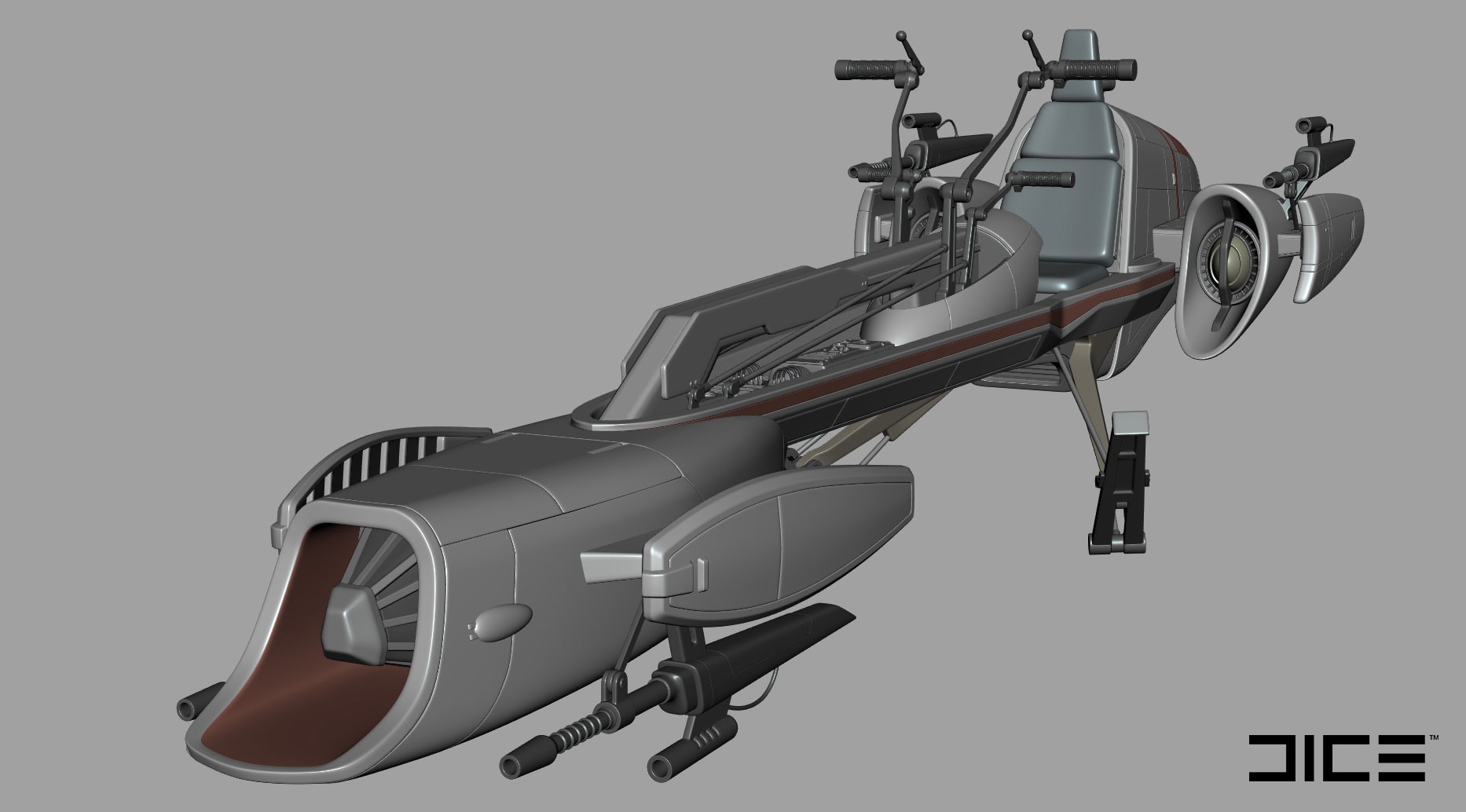 A work in progress look at the BARC Speeder

The primary weapon for the BARC comes in the form of the Light Blaster Cannons, dealing rapid fire damage.

Using this ability will detect all nearby enemies within close proximity to the BARC.

When used, the BARC's primary will no longer overheat for a short duration of time, allowing for focused fire upon an enemy.

A rapid-fire burst of cannon fire that charges up and unleashes high damage onto its target.

That’s it for this Transmission but we’ll be back with more very soon. Next week, we’ll be taking a deep dive in on Obi-Wan Kenobi ahead of his release in the Battle for Geonosis Update. We’ll be touching on his abilities, appearances, and maybe a few other things, too, so don’t miss it!