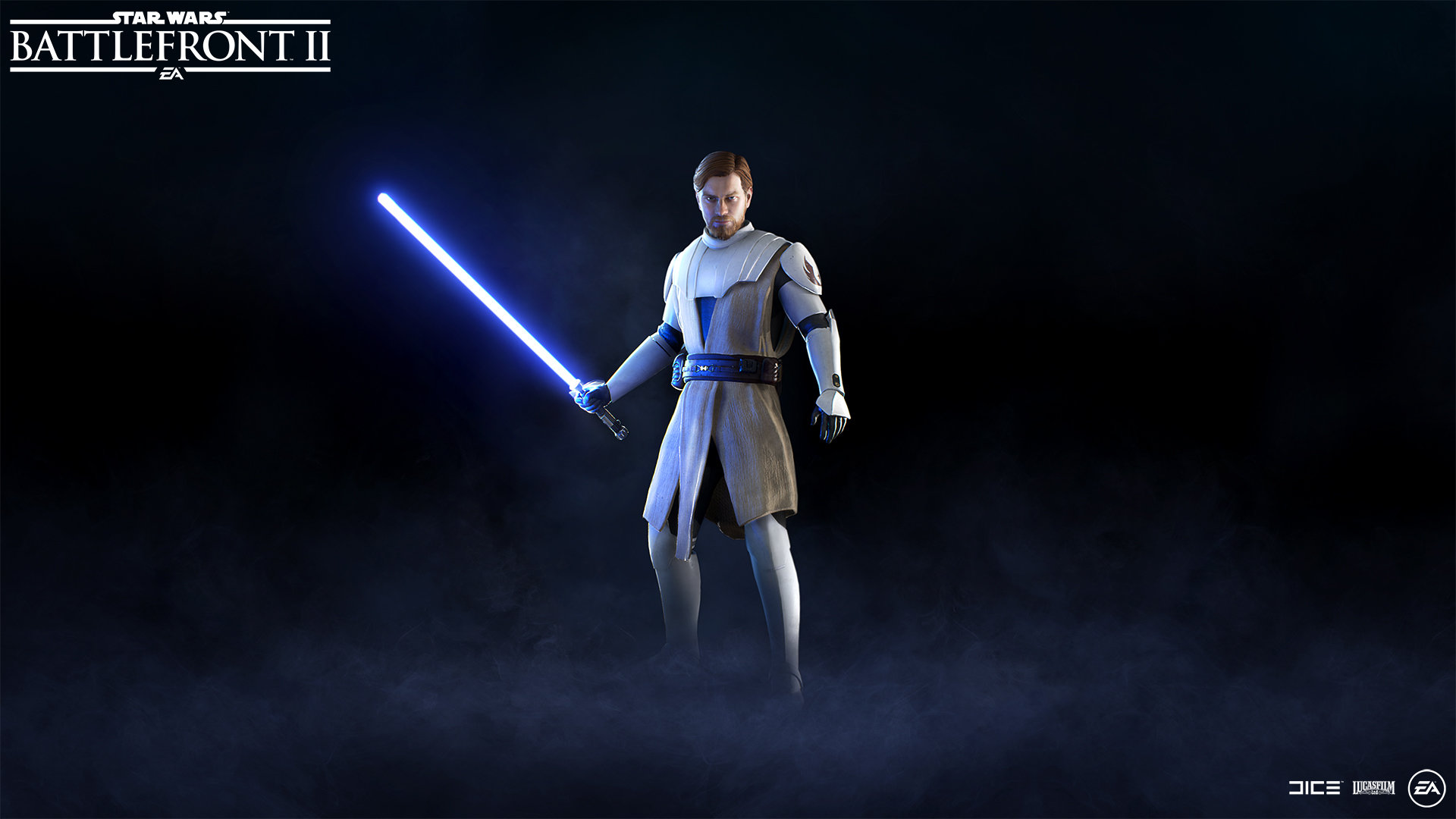 2018 is coming to an end but we’ve got time for one last update. Let’s see what’s coming tomorrow, December 12th into Star Wars™ Battlefront II.

A brand-new appearance will be arriving for Obi-Wan Kenobi and you’ll soon be able to enter the battlefront dressed in his “General Kenobi” attire, inspired by the Clone Wars animated show.

This appearance will be classed as Epic and will cost 40,000 credits or 1,000 crystals.

It’s been great to welcome Obi-Wan into Star Wars Battlefront II and in the December update, we’re going to be making some improvements to him.

We’ve focused a lot on his animations and have made improvements to his dodges, stagger and defeated animations. We’ve also tweaked various other animations such as his jump and attack, and his ground attack.

Further adjustments have been made, including improvements to Obi-Wan Kenobi’s model and character rigging. Many of these changes won’t be visible on first glance, but they all go together to improve the overall quality and feel of General Kenobi.

We’ve given Geonosis an art pass with multiple changes being made to the opening cinematics. These changes range from additional blaster marks being placed upon the factory door, to improved textures and increased details on the Clone Trooper helmet.

Improvements have also been made to the animation of the AT-TE.

After the recent success of the fast spawn event in Blast and based on your feedback, we have decided to permanently implement the squad system into Blast.

Alongside this addition we will also be reducing the spawn timer down to 5 seconds from 10 seconds, ensuring that Blast remains the action-packed experience that we’ve heard you want.

As this will be one the last Transmissions of 2018 we wanted to sign off with a look ahead to the new year and some other changes that we are working on that we haven’t spoken about yet.

While we don’t have specific release dates for these just yet, you will be hearing more about them closer to their respected releases. The below are still in development and details may change between now and the time they are released.

This has been a topic that is frequently brought up and quite rightfully so. It would be incredibly difficult to talk Star Wars without mentioning one of the most iconic aspects of the series.

Recently we began prototyping some new changes to the lightsaber combat and we’re hoping to release these early in 2019.

The biggest change you will notice with this is how attacking heroes will no longer stagger backwards upon hitting a defending hero. We’ve also made the change that once a hero has run out of stamina, they will not be able to attack.

These changes begin to roll out within the December Update, where we will be replacing the stamina reticule with a brand-new user interface element which will offer better insight into how much stamina you have remaining.

Alongside this user interface change, and also coming in the December Update is a new UI element that displays your ability to dodge.

From our playtests that has helped increase the flow of combat, making it a lot more fluid, tactical and most importantly, enjoyable. We can’t wait for you to go hands on with it when it releases in early 2019.

We will have more details on trooper customisation in 2019, but we wanted to let you know that it’s something that’s on the way.

On the subject of trooper appearances, we can also confirm that in January we will be rolling out changes to the 41st, 91st, 104th and 327th Clone Trooper squadrons based on your feedback earlier this year.

Emotes are a fun addition to the game and allow you to personalize your troopers and heroes with some additional personality.

Up until now, the amount of emotes you’ve been able to equip has been limited, but we’re making some changes in early 2019 that will alleviate this problem.

Through the use of the emote wheel, we will allow you to select from up to eight emotes during the game. One tap of a button and the emote wheel appears, from here you’ll be able to select the emote that you want to use.

As we move forward we are also investigating the ability to have a secondary emote wheel that focuses more on gameplay related communication such as “Cover Me” and “Defend Here”.