INCOMING TRANSMISSION!
Coming this month are two brand new ways to play, Co-Op and Instant Action. A brand new planet, Felucia and the Clone Commando also joins the conflict as a new reinforcement. It all arrives on September 25, let’s take a look. 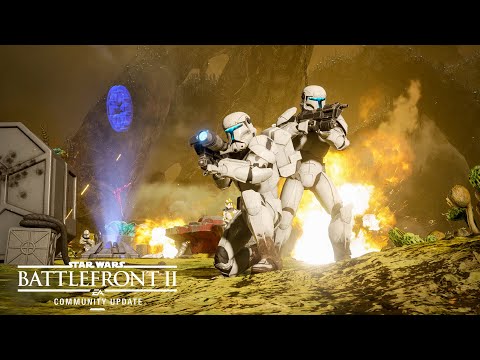 EXPANDING AI
With the release of Capital Supremacy earlier this year we brought with it our brand new AI system. If you’ve played Capital Supremacy then you will have noticed these AI running around, on your side and as opponents.

With this new AI system we’ve always had one eye on the future and how they could be further integrated into various areas of Star Wars Battlefront II. The inclusion of our two new ways to play, Co-Op and Instant Action has given us a perfect opportunity to not only bring the new AI system to additional experiences but to develop them further.

One of the big changes is that for the first time in Star Wars Battlefront II the AI will take control of heroes. Whereas previously you would only come up against a regular AI Trooper you will now find yourself going toe to toe with the likes of General Grievous, Yoda, Maul and Obi-Wan Kenobi.

Expanding the characters AI can play as also includes reinforcements, meaning you’ll also find yourself up against the likes of BX Commando Droids and ARC Troopers.

It’s been these advances to our AI system that has been pivotal in allowing us to bring these new experiences to life, but a challenge we’ve met head on.

We’re incredibly excited to be bringing this new content to the game and we can’t wait to see how our PvE community interacts with both new game experiences.

CO-OP
Squad up with 3 friends, or friends you haven’t met yet for a large scale PvE adventure against a team of AI controlled opponents.

Participate in massive battles across all of the Clone Wars planets that feature in Star Wars Battlefront II, including the upcoming Felucia.

Each planet has its own experience and this will see either the Separatist or Republic attacking.

In Co-op, all Troopers, Reinforcements, Vehicles, Heroes and Villains will be available to play. Much like game modes such as Galactic Assault or Capital Supremacy you’ll gain Battle Points as you progress which will allow you to choose the character you play as.

This means that while you will be in a squad made up of 3 other human players, you will also be joined by a number of AI who will also be in on your team.

Your opponents will be made up entirely of AI, and you can expect the same mixture between regular Troopers, Reinforcements and Heroes. As we move into October we’ll be expanding Co-Op to allow you to place as the defending forces, more on that next month.

INSTANT ACTION
We’re happy to announce that Instant Action is making its return to the Battlefront franchise, and we think it’s something that a number of you are really going to like. Solo players do matter and we’re incredibly excited for its imminent arrival.

In this mode, both teams are fighting over 5 Command Posts (similar to Capital Supremacy). Hold a majority of them until your team score reaches 100% to win the game. At release, you will have access to all the maps that are currently available within Capital Supremacy; Naboo, Kamino, Kashyyyk, Geonosis and Felucia.

Within Instant Action there will also be a selection of in-game options which will allow you to customise your experience. As we move forward we’ll be looking to further expand this list, so be sure to let us know what you’d like to see.

FELUCIA
As beautiful as Felucia is, the environment can also be hostile to those that traverse its lush and vibrant landscape. Mushrooms can explode and certain plants can leave behind a hazardous spores that will harm anyone that gets caught within it.

While the planet surface is more than enough to keep your attention, you may want to glance upwards on occasion as you’ll sometimes see both the Felucian Ripper and Birds flying through the skies.

You can read more on Felucia in this Community Transmission.

CLONE COMMANDO
The Clone Commando is a resilient fighter who is built for survivability, even against the toughest foes. With the ability to reconfigure his blaster into a grenade launcher he comes well equipped to handle any situation that he’s dealt with.
Should he find himself cornered or in need of making some space he can use his Repulsor Blast to knock enemies away. As a leader on the battlefront he can strengthen himself and his allies by granting a damage protection buff, using Battle Focus.

You can read more about the Clone Commando in this Community Transmission.

LUKE SKYWALKER
As far as characters go, there are few that are as iconic as Luke Skywalker. Throughout the Star Wars saga he’s had many looks, and we felt it was time to bring one of these iconic appearances into Star Wars Battlefront II.

We head back to Star Wars: A New Hope, to where it all began for the young farmhand on Tatooine.

As part of a special community quest, coming in October you’ll be able to earn the Luke Skywalker “Farmboy” appearance.

KENOBI!
As far as community requests go we feel that we have our finger on the pulse with what it is you want. However, we might have underestimated your burning desire to scream KENOBI at the top of Dathomirian lungs.

We’re pleased to confirm that coming in October will be a community quest which will enable you to unlock the Darth Maul “Kenobi” emote.

DAMAGE REDUCTION MESSAGING
We have added new UI and audio elements to let you know when you are dealing damage to an enemy that has a damage reduction applied. This is done because we want to help all players understand the game and its abilities better.

Damage reduction can come from a number of different sources, most notably the Clone Commando´s Battle Focus ability, and Hero effects like Grievous´ Star Card Flesh is Weak or Anakin´s Retribution ability.

Here is a summary of the new elements added:

QUALITY OF LIFE
Added Damage Reduction messaging. New UI and audio elements have been added to let the player know when damage is dealt to an enemy that has a damage reduction effect applied.

Here is a summary of the new elements added:

The health bonus from the Officer's Battle command, Yoda's Presence and Finn's Big Deal should not stack anymore.