“You are strong and wise, Anakin, and I am very proud of you. I have trained you since you were a small boy. I have taught you everything I know, and you have become a far greater Jedi than I could ever hope to be.”
— Jedi Master Obi-Wan Kenobi to Jedi Knight Anakin Skywalker, Revenge of the Sith

Few truly knew Anakin Skywalker, though many spoke of him and his countless feats during the Clone Wars. Hero of the Republic and one of the most valiant Jedi Knight on any battlefront, Anakin’s story is one of tragedy and longing, but also one of hope and love.

His power and skill were virtually unmatched, though his overconfidence and anger could get the better of him. Even still, when innocent people were in danger, he would never hesitate to put his life on the line to save them; when his friends needed his help, he wouldn’t abandon them. 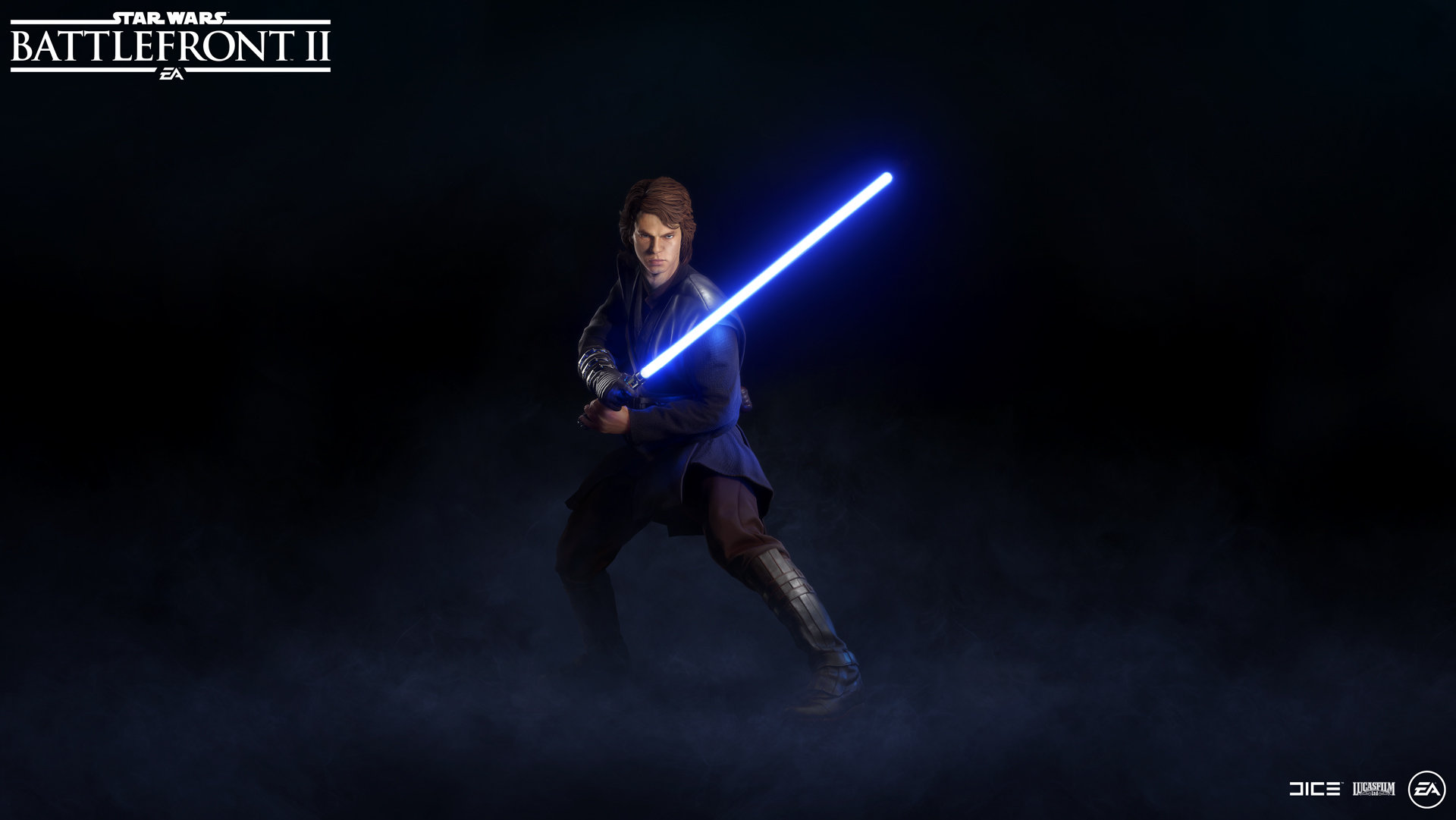 With the arrival of the Chosen One comes one of the strongest light side hero in Battlefront II. Anakin’s ability to unleash a barrage of fast, devastating attacks is unlike any other Jedi and set him on another level. While his offence is practically unmatched, his defensive capabilities aren’t up to the same calibre. Anakin won’t be able to sustain his blocking for as long as some other light side heroes against lightsaber strikes, but he is still very adept at deflecting blaster bolts. His lightsaber attacks deal 140 base damage (+40 from behind). Additionally, Anakin has a base health pool of 800 HP and a base regen pool of 250 HP.

Quick to anger at times, Anakin’s Passionate Strike is an overwhelming vertical slash that he’s used in many fights during the Clone Wars to break through his enemy’s guard, just as he did against Count Dooku before “disarming” him. Even the strongest Sith Lord’s block will be rendered useless against this heavy attack, so timing it well is key to taking down opponents as it will deal full damage against a blocking enemy. This ability deals base damage of 180 to heroes and 250 to non-heroes.

Anakin isn’t limited only to his prowess with a lightsaber. Tapping into his incredible powers with the Force, Anakin can unleash a powerful Force blast all around him, similar to what he did against the Son and Daughter while his friends were being held against their will. While using his Heroic Might ability, Anakin steels himself in place and focuses on concentrating the Force within him, charging the ability while taking a damage reduction of 90%. During this time, the radius for this ability will increase. However, the radius will also increase passively as Anakin funnels the damage he would otherwise take while charging the ability. With the ever-increasing blast zone, the damage the ability deals will also increase exponentially up to a maximum of 400 damage and a minimum of 100 to heroes or 130 to non-heroes. The radius increases by 1m for every 50 damage Anakin takes (before damage reduction is taken into account). When he’s ready, Anakin will thrust both hands out and release his power, hitting all enemies around him.

However, should you wish to bring the enemy to you rather than launch them away, Pull Dominance allows Anakin to reach out and heave his enemies towards him, similarly to how he did against Barriss Offee when she betrayed the Jedi Order. Any foes caught in this attack will be ripped into the air and dropped down in front of him in the range and at the mercy of his powerful lightsaber strikes. This ability does base damage of 70 to heroes and 100 to non-heroes.

Some might say Anakin’s strength was also his greatest weakness as it too often went hand-in-hand with his rage. Unlike many other heroes, Anakin has a fourth ability, one which is darker in nature than his others.

As Anakin and his allies take damage and as he inflicts damage to his foes, his raw power will build alongside his fury. Once this ability is fully charged, Anakin will be able to unleash his Retribution onto any enemies unlucky enough to be in range. Anakin will be punished his enemies with a Force choke similar to Darth Vader’s ability, except this one, like Heroic Might, has a 360° area of effect and will affect all enemies in its area of effect.

Upon use, the charge resets and can be built up once again. This ability does 100 damage over time to heroes and 150 damage to non-heroes. As his anger flows through him, Anakin takes 90% damage reduction during this ability’s duration, too.

Anakin is more resistant to attack while holding the ability. When released, he pushes enemies away from him, the range and strength of his attack being multiplied by the damage he would typically be susceptible to.

Anakin pulls enemies in front of him to a center point, leaving them open for attacks.

Anakin’s powers intensify whenever he and any nearby allies are attacked, building towards the ultimate punishment of a swift and inescapable grip seizing all enemies around him.

We’ll be back next week with a full look at the February update and all that you can expect from it. Stay tuned for the next Community Transmission!