[OPEN] Scenario: 'Power Couple' get divorced if one travels to another lot

[OPEN] Scenario: 'Power Couple' get divorced if one travels to another lot

Product: The Sims 4
Platform:Mac
Which language are you playing the game in? English
How often does the bug occur? Often (50% - 99%)
What is your current game version number? 1.83.24.1230
What expansions, game packs, and stuff packs do you have installed? EP: Get to Work, Get Together, City Living, Cats & Dogs, Seasons, Get Famous, Island Living, Discover University, Eco Lifestyle, Snowy Escape, Cottage Living GP: Spa Day, Dine Out, Vampires, Parenthood, Jungle Adventure, StrangerVille, Realm of Magic, Dream Home Decorator SP: Nifty Knitting, Tiny Living, Moschino, Laundry Day, Toddler, Fitness, Kids Room, Romantic Garden, Movie Hangout, Spooky Kits: Blooming Rooms
Steps: How can we find the bug ourselves? Start the new Scenario - Power Couple. Travel with both to a new lot Return one sim home, the other stays on the new lot. When home lot loads and only one sim is there, it will say "scenario complete" award points because the couple is now "divorced"
What happens when the bug occurs? Bug seems to not understand what divorce is? if one sim is away from home when the home lot loads the scenario is over. I started this scenario, if one person travels off the lot (ex both went to the gym, one went home) and we travel back to home lot but only 1 person is there it says "scenario complete" because they are "divorced" but one is just at the gym. Also occured when they both traveled to the ruins for a party, one went home early so I switched to them. As soon as the home lot loaded with only one sim (the other still at the ruins) it told me scenario over because they are "divorced"
What do you expect to see? I expect to have to literally divorce my two sims for them to count as divorced.
Have you installed any customization with the game, e.g. Custom Content or Mods? Not now. I've removed them.
Did this issue appear after a specific patch or change you made to your system? No

Tried with and without mods.

The scenario doesn't seem to understand what divorced is.

This scenario just completed for me also. One sim was at home and I took the other to Evergreen Harbor to dumpster dive alone since the other was asleep. Once the screen loaded with the one at Evergreen it said "Scenario Complete: These Sims are now divorced".

Before this happened I took them to a library together and to a camping area, returned them home seconds from each other but when I had one leave the house without the other they suddenly get divorced.

Premature Scenario Completion, is this supposed to happen?

I am not sure if this should be posted here or in the general discussion section...but anyway, onto the point of this post:

I am currently playing the Power couple scenario, but it seem like whenever my one of my sims goes to another lot while the other stays home suddenly the scenario is prematurly completed. I think it considers them divorced all because the wife took the dog to the veterinarian. So, is this supposed to happen or is it a bug/glitch issue?

Re: Premature Scenario Completion, is this supposed to happen?

Re: Premature Scenario Completion, is this supposed to happen?

Since my post has now been merged with a bug report, I will just add:

And I have No Mods/CC

Re: Scenario: 'Power Couple' get divorced if one travels to another lot

Re: [OPEN] Surviving the Holidays Scenario Completes Before Reqs Met

Same thing happened to me just now, except with the Power Couple scenario; saying they divorced in three saves. Tried 3 different lots, all in different worlds.. I'd taken them on a date, they left to go to work and when one got tome, it read "Called it quits" with the broken wedding bands. [game time 17 hours] Second was when they left and came back from work. [game time 34 hours] Third was one went to a party. [game time was 28 hours]

I don't use mods or anything. I've collected all te packs over the years except JtBatuu and a few kits.

Re: [OPEN] Surviving the Holidays Scenario Completes Before Reqs Met

Re: Scenario: 'Power Couple' get divorced if one travels to another lot

Also Power Couple scenario. I got one of them to pick up the odd job of cleaning up a beach in Sulani. Scenario said it was completed due to divorce the moment the sim loaded in Sulani. I checked the relationship panel and they are still flagged as married. I was able to successfully travel to another lot with both sims present but the scenario completed when only one traveled without the other. 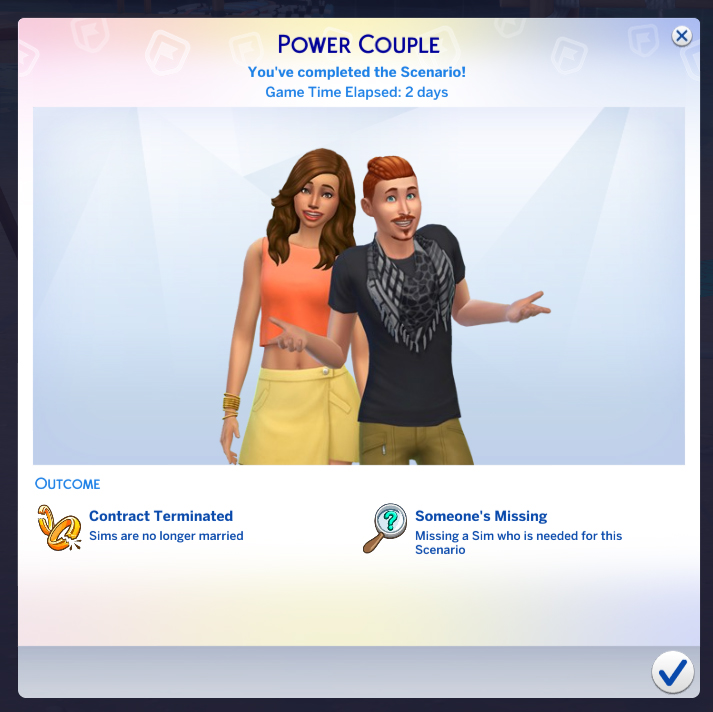