Product: The Sims 4
Platform:PC
Which language are you playing the game in? English
How often does the bug occur? Every time (100%)
What is your current game version number? 1.63.133.1020
What expansions, game packs, and stuff packs do you have installed? All
Steps: How can we find the bug ourselves? Put any female top or outfit with chest shading on a male sim.
What happens when the bug occurs? When male, masculine-framed sims wear feminine clothing the clothes still have "boob shading", giving the illusion that the sims have breasts.
What do you expect to see? That the shadows would be edited away on feminine clothing that have been converted for use by male sims.
Have you installed any customization with the game, e.g. Custom Content or Mods? Not now. I've removed them.
Did this issue appear after a specific patch or change you made to your system? No

From reading the archived threads about gender conversion details looking wonky, I've gathered that the developers are (or were?) looking into fixing everything that looked weird. However, it's been four years since the feature was introduced and this problem still remains. I didn't see many people talking about it in those archived threads so I thought I'd make my own thread. Apologies if there already is an active thread on this - I wasn't able to find one.

The shading really bothers me a lot, so I haven't been able to make use of female clothing on my male sims. Is this something the developers are still working on?

Pictures for reference. One red, female top and a green, male top worn by the same sim for comparison. It occurs with all feminine clothing that has chest shading. There also seems to be some slight extra padding going on on his pecs and upper back. 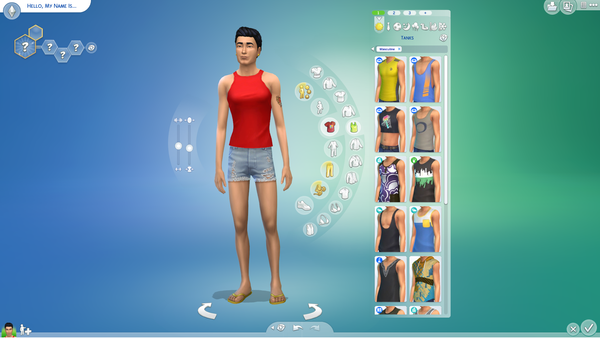 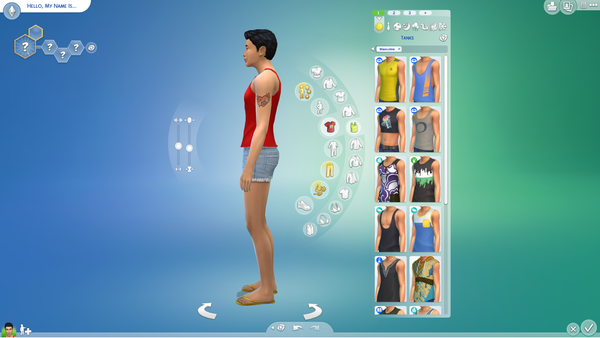 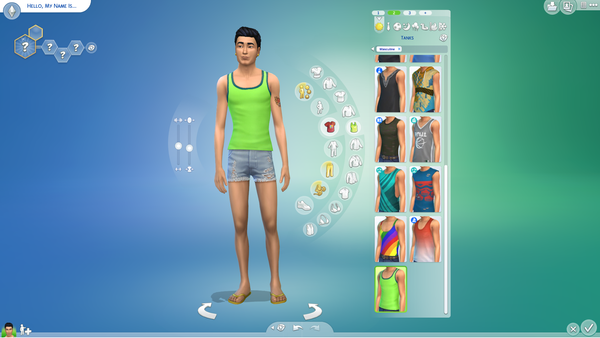 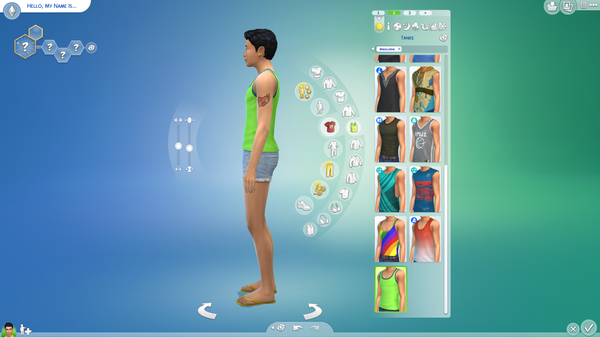 I completely agree. We get more and more clothes, but almost none of them come in one version for each 3D-rig, everything is made only for one of the 3D-rigs. Put some clothes for the male 3D-rig on a sim with the female 3D-rig and you'll get a weird crotch and jagged breasts. Put some clothes for the female 3D-rig on a male sim and all the bottoms become low-waisted (sometimes ridiculously low-waisted) and tops either just look weird or give them the illusion of breasts.

The chest shadows will remain because they are painted onto the texture.

The assets are not created for each seperate body frame. The game simply applies a morph to the meshes so that they fit the other frame shape.

@Alistu Some clothes originally for the female 3D-rig are repainted so that they look good on the male 3D-rigs too, specifically almost all bathing suits and the bodysuits from base game and Realm of Magic. What they did is that they made two versions of each item and tagged them so that only the ones with breast shadows show up for female sims and only the ones without breast shadows show up for male sims, even when you remove the "feminine" and "masculine" tags.
Message 4 of 5 (1,659 Views)
Reply
4

@Alistu It's not only the shadows painted on that's the problem, though. The mesh is also weird - the male framed sims get mini breasts when wearing female tops. See the pictures above.

Judging by this post made by Crinrict 4,5 years ago it seems that at least back then they wanted to fix clothing that looked weird on the other gender (https://answers.ea.com/t5/Bug-Reports/ARCHIVED-Issues-with-Gender-Conversion/m-p/5376088#M48731). So I'm hoping they will look into this.

This is a game that prides itself on its inclusivity, which makes it all the more disappointing that this feature has been practically unusable ever since they introduced it, at least when it comes to male framed sims wearing female tops and full body clothing. And, as Katrus91 pointed out, they don't seem to be correcting this for new clothing that gets put in the game either.