Product: The Sims 4
Platform:PC
Which language are you playing the game in? English
How often does the bug occur? Rarely (0% - 9%)
What is your current game version number? 1.70.84.1020
What expansions, game packs, and stuff packs do you have installed? All but Batuu
Steps: How can we find the bug ourselves? Play on a haunted lot with L-Shaped stairs and beds for long enough.
What happens when the bug occurs? Cursed objects rarely spawn on unreachable spots.
What do you expect to see? cursed objects only spawning where sims can reach them and/or ability to move them in buy mode so they can be relocated where sims can reach them
Have you installed any customization with the game, e.g. Custom Content or Mods? Never used.
Did this issue appear after a specific patch or change you made to your system? No

I've seen this happen twice in my game, both times it was the cursed doll, so it might be only related to that object.

Workaround for the doll spawning on the bed is to move the bed, for the stair landing I managed to destroy it by doing the "ghastly ritual" on the seance table and floating there as a ghost.

I've had a similar experience, ie cursed objects spawned in places that can't be reached, either because there was no access or because it appeared the cursed object spawned and blocked the pathway.  In both cases where I had it happen, my sim was doing a freelance gig.

In the first case, my sim had a gig in an apartment in San Myshuno and where the door should be was a black square so he couldn't go inside (ie the option to go in to do the investigation wasn't there). So initially it seemed like my sim couldn't do much other than get rid of the one cursed item and do the ritual, however, I looked outside the building and it turned out that cursed objects had spawned there and they needed removing however my sim was unable to use the elevator (I think possibly the vines were blocking the exit since he was putting his hands up and cancelling the instruction each time I asked him to go downstairs).  In that case I had to use the teleport cheat to get him downstairs and then he could get rid of the objects outside the building, but that's an example of the cursed objects spawning where they blocked the sim's path.

In the second case, my sim's gig was at a home in Windenburg (I believe it was the Cottage Am Se lot, where the Free Spirits live) and there was an item that my sim was supposed to get rid of in an area that had a hedge on one side and fence on the other so wasn't reachable. I tried to use the freebuildcheat to edit the lot so my sim could get to it and the game did not like that! The option to go in to investigate disappeared, but luckily there was enough stuff outside that he was successful.

Can anyone experiencing this issue possibly share a save file with me where you've seen it occur? You can DM me the link to your save, thanks so much!

Instructions for sending me your saves: http://answers.ea.com/t5/The-Sims-4-Bug-Reports/INFORMATION-How-to-Send-User-Files-to-The-Sims-4-Tea...

I unfortunately deleted the save some time ago, and haven't experienced it since (instead, I've had pretty consistently the bug where specters & stuff don't spawn on gigs). If I see this happen again, I will be sure to send the save.

Product: The Sims 4
Platform:PC
Which language are you playing the game in? English
How often does the bug occur? Often (50% - 99%)
What is your current game version number? 1.71.86.1020
What expansions, game packs, and stuff packs do you have installed? All the existing packs except for Journey to Batuu.
Steps: How can we find the bug ourselves? Start a new paranormal investigator gig. If the lot you have to exorcise is an apartment lot in San Myschuno, there's a chance that the cursed items will spawn in the areas that your sims can't reach (e.g. the space near the elevator).
What happens when the bug occurs? The cursed items are spawned in an inaccessable area, and therefore cannot be destroyed to increase the gig performance bar. Eventually, the sim just fails the gig.
What do you expect to see? All the cursed items should be spawned in the area that can be accessed by a sim.
Have you installed any customization with the game, e.g. Custom Content or Mods? Not now. I've removed them.
Did this issue appear after a specific patch or change you made to your system? Neutral/Not Sure

Basically, some of the cursed items spawn in the area near the elevator, and there's no way a sim can access it.

I've provided a screenshot that may help you understand what I'm talking about (the hand near the elevator). 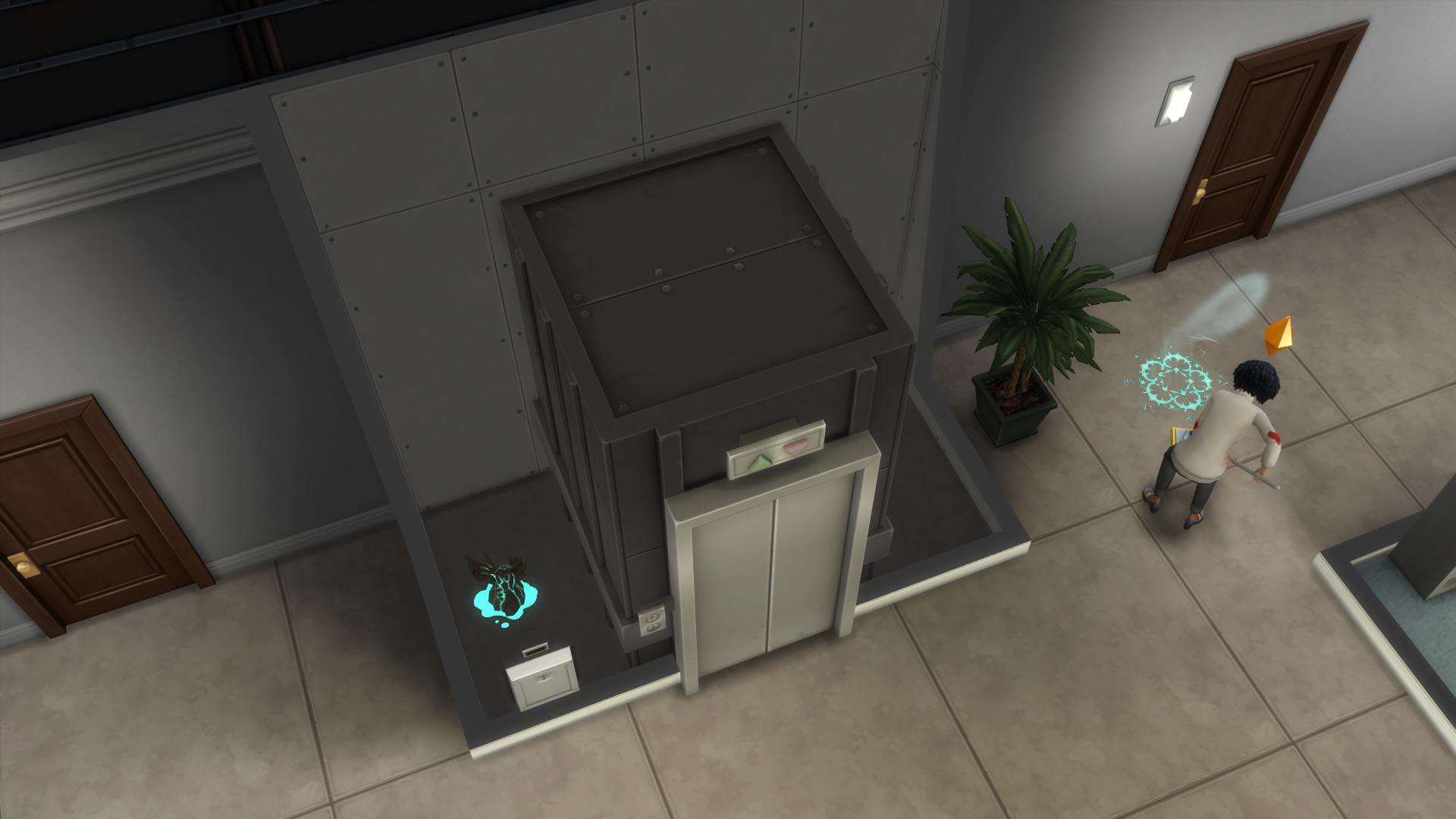 Edit by KinkyWelder: Fixed a Typo

I am also seeing this on Xbone, not just objects but also specters spawning inside roofs.

@ra7orrat in apartments during a gig or generally ?

@crinrictspawning of objects in inaccessible places happend to me on gigs at houses (not apartments), spawning of specters inside roofs is happening in one of my haunted houses.

QA is looking for saves for that although you're in XB1, right ?