Product: The Sims Mobile
Platform:Android Phone
List the specific devices you play with (e.g. iPhone 6s Plus, Samsung Galaxy S7) LG g7
OS Version Android
Player ID: (Find your Player ID in Sims Mobile: https://help.ea.com/help/the-sims/the-sims-mobile/find-your-player-id-in-the-sims-mobile ) 1003539238589
How often does the bug occur? Every time (100%)
Steps: How can we find the bug ourselves? Cannot start harvestfest restaurant, home or cafe event while on the correct step to do so in order to complete the event.
What do you expect to see? The ability to progress
Connection Type Wifi
Please select your region North America
Country Usa
Additional feedback

The event does not show up available at the fridge or restaurant. When selecting it from the home menu, it does nothing.

SimGuruFrost: "It's not possible for us at this time to add additional time to events. Once set into motion they have to run their course. I would encourage you to reach out to EA Help through TheSimsMobile game and give them a list of all the bugs you have encountered."

For everyone affected by this bug, the advice is to contact EA.
Seeing the event will end soon, I'm not expecting a fix so you can actually finish this event.

This is how you can contact EA: Open the side menu, choose the gear icon, then the button with 'Help'.
This will open your browser, scroll down until you see 'Contact Us' and choose 'Technical Support'.

Open the spoiler for pictures:

If this fails for some reason, or you can't access The Sims Mobile app.

If you want to do so in a different language you can choose your country of choice in the upper right-hand corner.

You can also choose to contact an EA game advisor through social media:

You can also find the workaround suggested by @SimGuruMaaike over here:
https://answers.ea.com/t5/Bug-Reports/Open-Can-t-start-Harvestfest-restaurant-home-or-cafe-event/m-p...

Edit: this message has been spotted in the game:


Hey guys. For everyone that didn't finish the Harvestfest quest due to the glitches. EA is adding the prize from the quest to ALL the heirloom chests so that everybody has the chance to receive the Pumpkin Spice Lovers story. 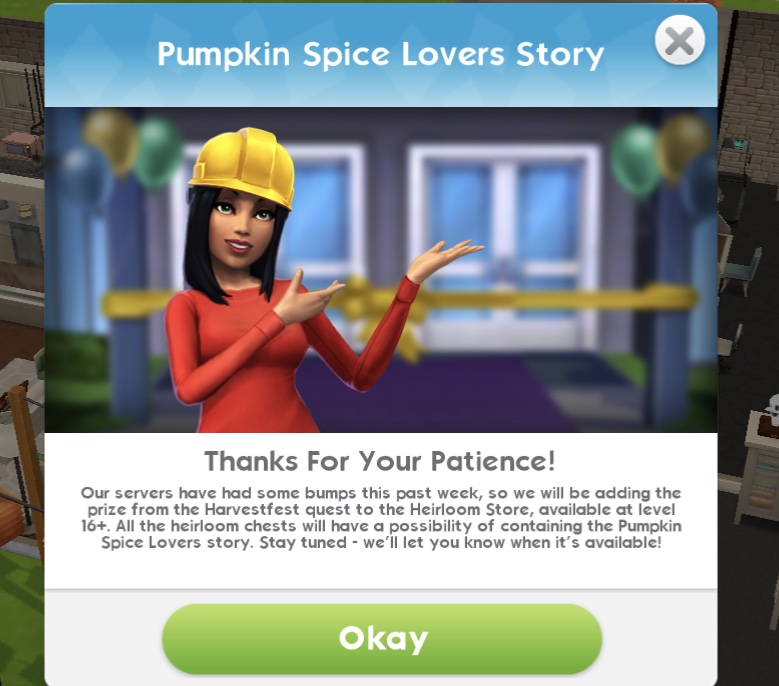 Original message can be found over here: https://answers.ea.com/t5/Bug-Reports/Open-Can-t-start-Harvestfest-restaurant-home-or-cafe-event/m-p...

I do not work for EA

I wonder if the entire event is glitching because I can’t select the Cozy cheer event anywhere (not in the main event hub, the fridge tab, or at the cafe). Also, the Harvest cooking event shows up at the cafe and on the fridge as well. It’s frustrating because I won’t be able to progress in the Quest at all now. :/

Sorry in advance for posting this here, but since this is a limited time event I don’t want to risk the problem not being seen.

I’m on part 13 of 29 in the harvest fest event. I had a sim begin the restaurant event overnight. When I woke up this morning, the sI’m was receiving completion re-cards for a long hang out. There is now no way to actually start the restaurant event, either by clicking on the fridge, going to the restaurant, or choosing the option from the west sub screen. The only options that I can select are the café event, or the home event. Has anyone encountered this?

I am having the same problems as well. I noticed last week when I would put my Sims in a certain event  and come back hours later to check, they would be in a totally different event then what I put them in. Today I started the harvest event quest and put all 3 of my sims in a harvest event, came back the next morning and it only recognizes only 2 events being completed  not letting me click on the cozy event. This is frustrating because there are time limits on these events.

Hey, I had the same problem with the same event on part 13. I too received rewards for a long hangout and the harvest cooking event didn't show up. However, after i closed the game and re-opened about 10 minutes later, suddenly my sim was in the middle of the harvest cooking event! But.. there is a glitch, while my sim was in the event none of the activity stars were showing up. So i could not perform any actions to speed up the event. I've attached a screenshot of the restaurant while the event was on, note the missing pink stars... 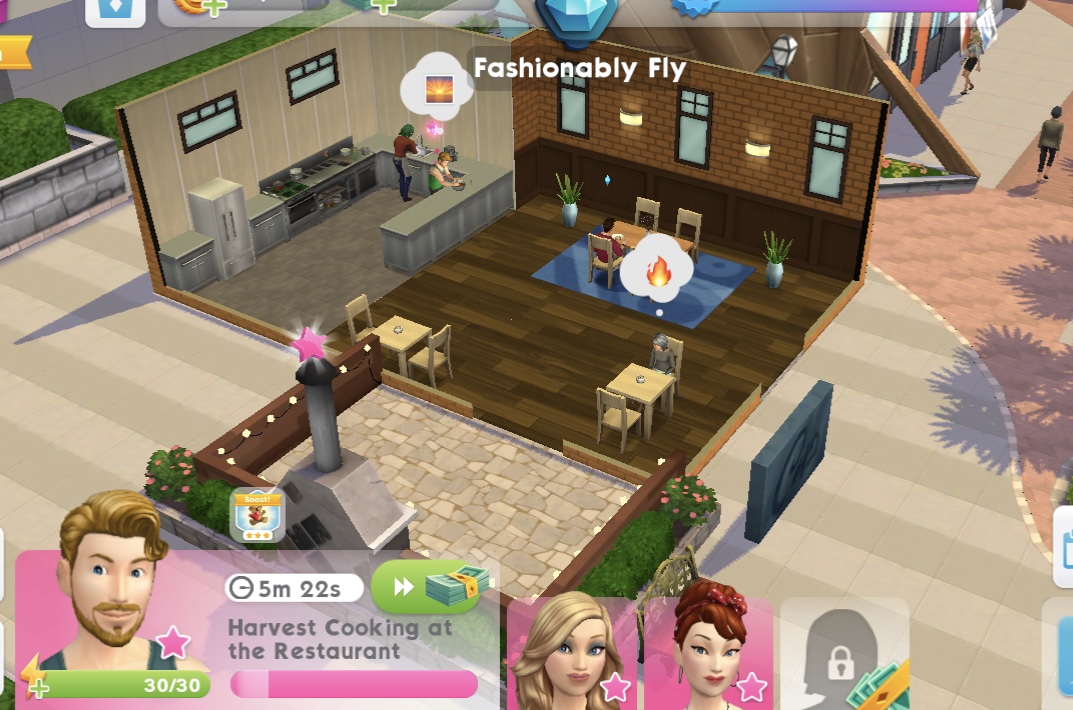 Last night I put one of my sims on the event's restaurant event, and this morning it said she had completed a quick career event.

I didn't try to start the restaurant event after though, since I wanted to work on lamazoom first. So I don't know about the second part.

This happened to me a few days ago too. When I put one of my sims on a long career event, but the next day it said standard career event. I thought maybe I just remembered it wrong at that time, but now I'm 100% sure I left my sim on the restaurant event.

Kind of bummed, honestly. Since I missed out on a good opportunity to get a decent amount of that event currency. (As in, if it had just stuck to the restaurant event, it could have reloaded while I did lamazoom. Now I had to choose between doing lamazoom ot the restaurant event.)

So after seeing Mai653's reply, I tried closing off my game fully and started it up again. Only to find that the above mentioned sim had now finished the restaurant event, even though I had already put her on a new event a bit ago (long career). Along with that, my other sim, who I had put on a standard career event just a bit ago, had now completed a quick career event for some reason.

After that I shut off my game again and re-opened it, and now both sims were back on the event I had put them on a bit ago (so long and standard career).

Not to mention kind of worried about how all of this is going to impact the harvest event.

Just an update: there appears to be another thread open for this issue in the 'bug reports' section:
https://answers.ea.com/t5/Bug-Reports/Sims-mobile-event-glitch/td-p/7172186/highlight/false
Message 7 of 317 (6,533 Views)
Reply
3

Part 13 for the harvestfest quest us not working. When I staryed the event last night it began as a standard work shift. Now it wont let me select the event.

Tried shutting down the game completely and found that my sim was back in the event. Very relieved, but also very worrisome. I hope the developers can resolve the root issue causing this.