Dine out chefs will not cook?

I just got dine out 2 days ago and for the first little bit my chefs would actually work, and I would be able to "manage" them. Now the manage option is gone for the chefs only, and they do not work. They stand around on tablets the whole time.

I have tried resetting the sims 4 files, firing and hiring new chefs, replacing the cooking supplies, quitting sims and re opening it.

How can I fix this problem? This pack is pretty much useless to me at this point.

Re: Dine out chefs will not cook?

Are they still labeled with their job ? when you hover over them ?

Have you tried selling the restaurant through the map and then rebuying ?

Re: Dine Out seating issue..

Sorry, I still haven't tested the date option, I will though.

However, I built an entirely new venue from scratch with PLENTY of tables and chairs (non-booth) inside spread between 2 floors and STILL guests are seated outside. -_- This time the host actually walks them through the front door without issues (I have a backdoor also, but they used the front door). 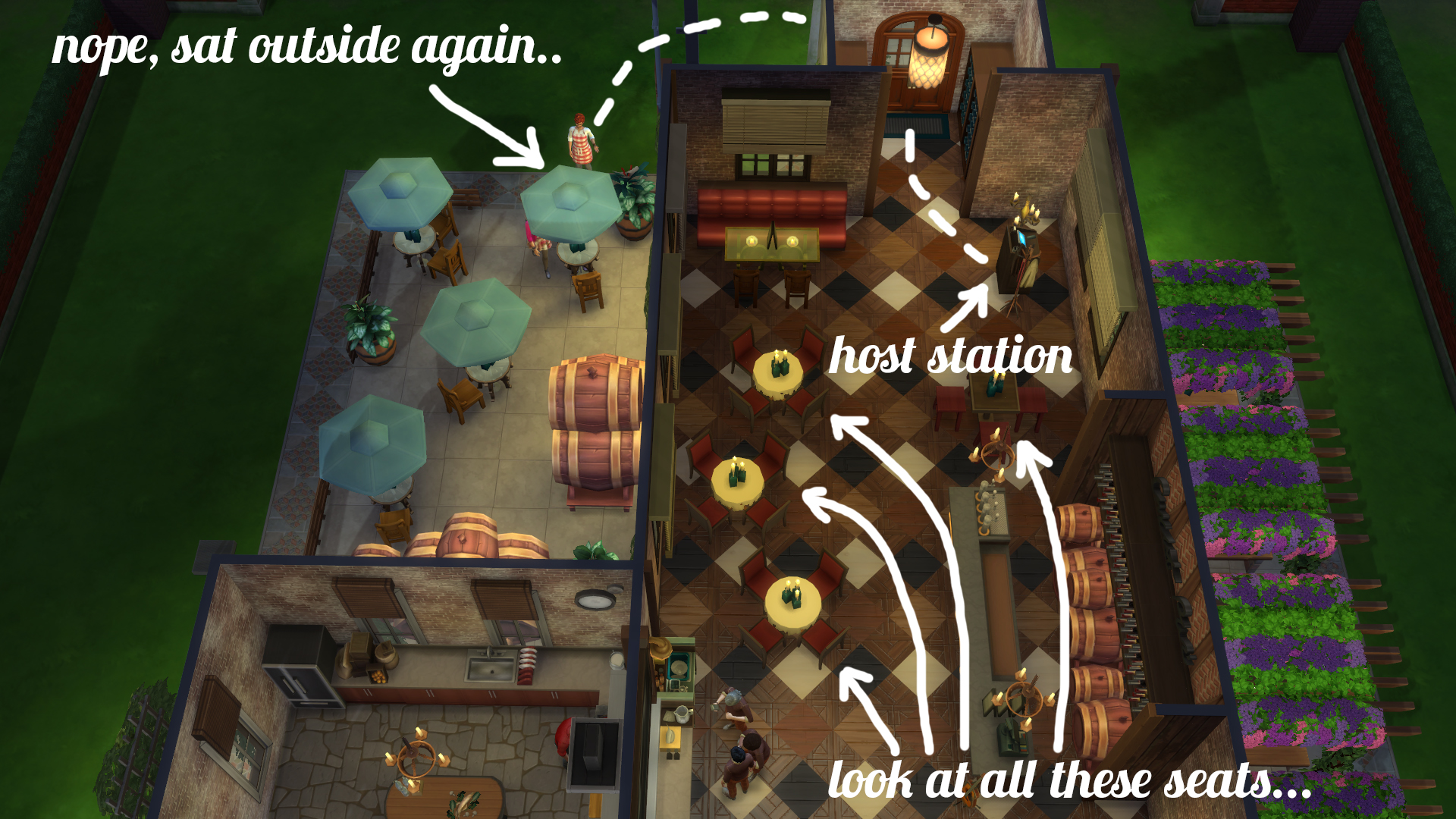 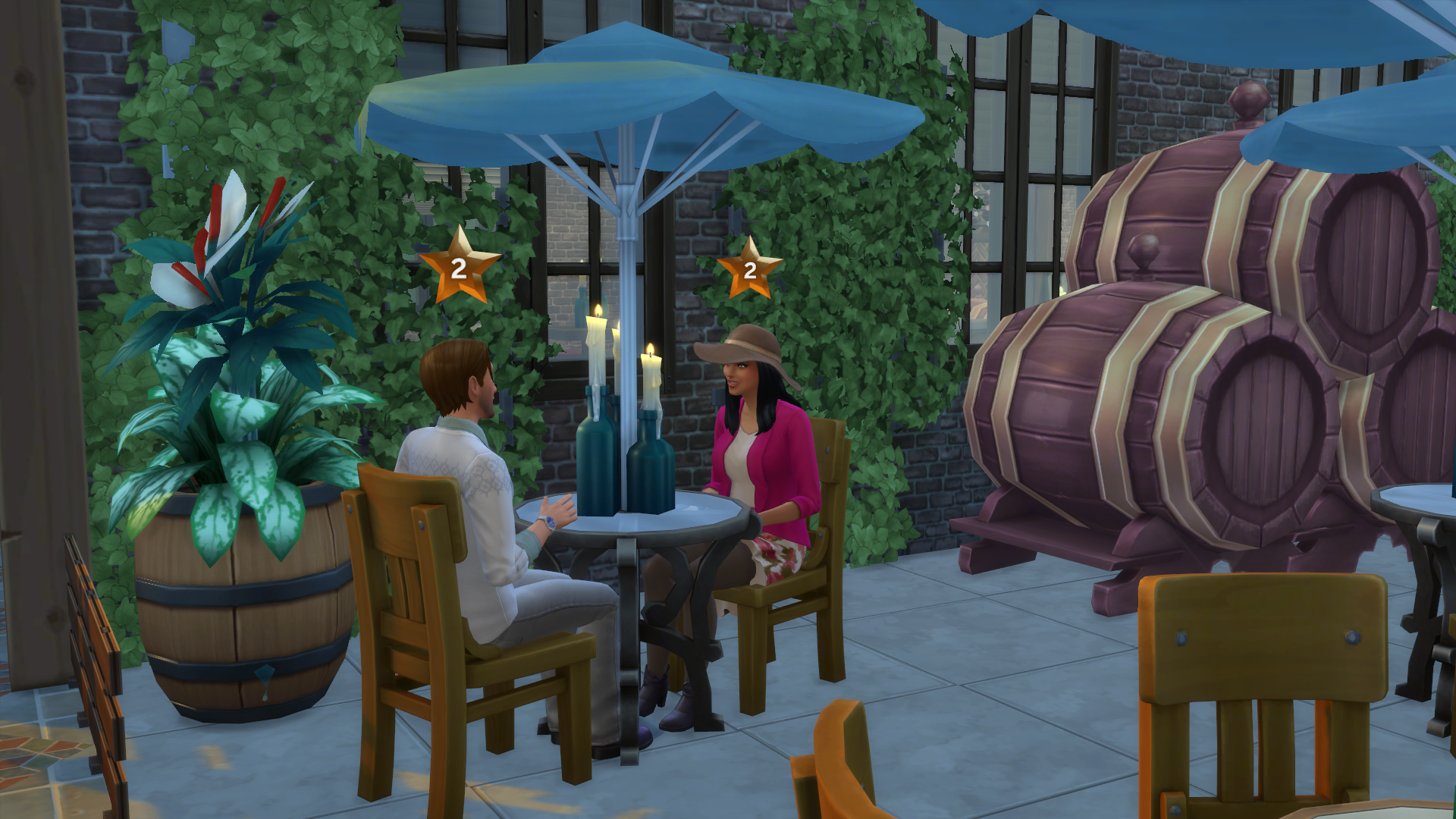 Next group of guests in was a family of 3. I hoped they would at least be seated indoors at the booth - nope, sat outside again, on the other side on the picnic tables... 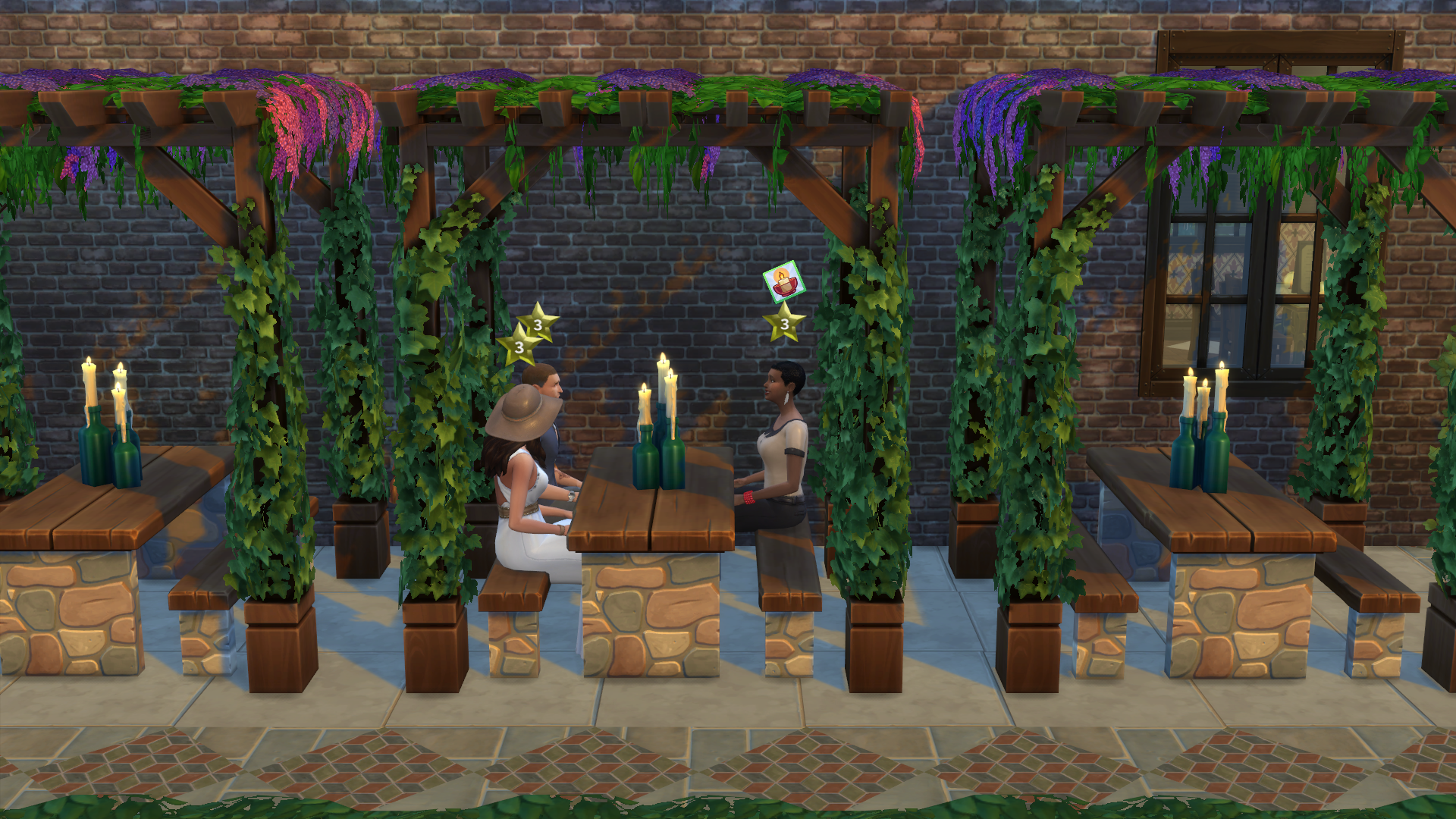 Re: Dine Out seating issue..

One more thing, not sure if I should create a new thread for this but I noticed that waiters will prioritize mopping up puddles over serving food and cleaning dishes.

My 2nd restaurant is a winery, so I have a garden with trees and berries. When my sim waters the plants, they create puddles on the ground (soil, not floor), and all 3 waiters rush to mop them up, ignoring ready food plates and dirty dishes.

When trying to use any clothing or hairstyles from Get to Work on my sims, they do not appear and just show a blank space between where the item would end and begin. (for example, if I put a pair of pants on my sims from get to work, it will appear as though their body stops between their hips and their ankles, and then reappears at their ankles.) For the hairstyles, it only shows a little bit of the hairstyle, and the rest just looks bald and jagged.

Steps you took for Issue to occur
I downloaded dine out and the new patch (the one with lots of new CAS).

Where does the bug occur ?
It occurs in every save game.

Mods/CC
No, I have never had any.

Operating system
I have a macbook pro (the 'model identifier' is MacBookPro10,1)

Can you try again ?

Can you also try repairing the game through Origin ?

not sure why they are, when the chefs place the serving plate down on the rack sometimes more then one waiter wants to grab the serving plate at the same time then resets, leaving the customers setting at their table without their order. this will cause customers starts getting mad that they haven't  gotten their order yet..this also starts down grading the restaurant..same bug effects cleaning tables off  they just start leaving piles plates on the floor..

so, some looking into Sim Teams and everything else seems to be working as intended

I seem to be having an issue with my chefs becoming Unsatisfied. They have been promoted the highest rank (5), and I constantly do "Praise", "Check Up On" and "Give Inspirational Speech" yet I always get a pop-up saying Chef X is very unsatisfied, and I need to talk to them or promote them, both of the things I cannot do because they're promoted to the max, and all of the talk interactions are on cooldown.

This is a 4.5 star restaurant. 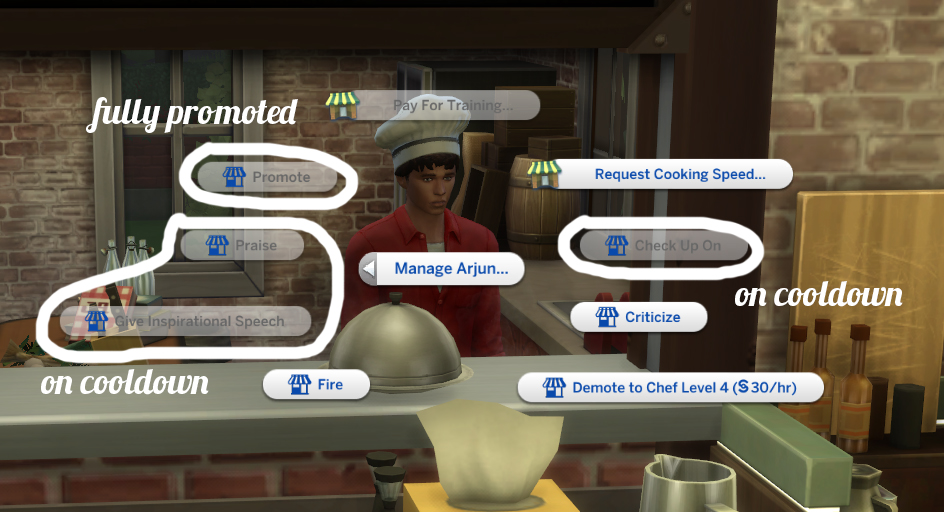 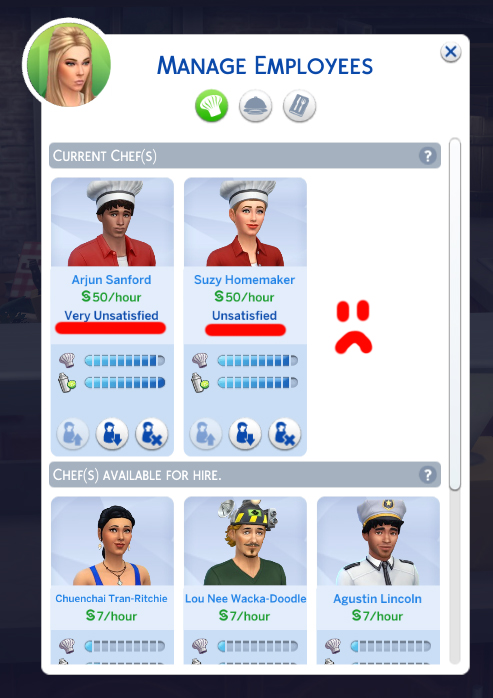 How long did you have them work ?

Are you using mods in your game ?  If so, please remove them

See this for more information: [PLEASE READ] Usage of Mods and Custom Content