Before I downloaded any expansion packs, ect. I had no issues with downloading any mods. But when I got city living, parenthood and dine out, ClientDeltaBuild0.package would appear and then I had to  remove then delete all my mods just for the game to work because it was letting me see worlds I didn’t even purchase. The game works fine without any mods but that’s the problem I should be able to use mods with no issue beings tho I had it before without a problem. I also tried to delete the sims folder to start over but now all it does is come back after I delete it. I don’t know if one of the expansions broke my pc or something but I just need help. Also the ClientDeltaBuild0.package would still appear even after the mods were gone. 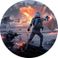