Product: The Sims 4
Platform:PC
Which language are you playing the game in? English
How often does the bug occur? Often (50% - 99%)
What is your current game version number? n/a
What expansions, game packs, and stuff packs do you have installed? Cats and Dogs, City Living, Get Together, Get to Work, Vampires, Laundry Day Stuff, Holiday Celebration Pack.
Steps: How can we find the bug ourselves? It takes some time to show up, at least for me, and it started after I moved my sim to the penthouse apartment that the bug started to happen.
What happens when the bug occurs? My sim harvests one plant then gives the message "Looks like that's all to harvest right now!'. This also happens with Tending Garden, I receive a message "No plants need tending at the moment." and only one plant is tended to when there are still weeds and others around that need tending.
What do you expect to see? My sim stands there and harvests one plant and tends to the one plant I issued the command for (Harvest All or Tend Garden) and then goes off back to play on the computer or do something else leaving all the other plants still with harvest-able items or in need of weeding.
Have you installed any customization with the game, e.g. Custom Content or Mods? Not now. I've removed them.
Did this issue appear after a specific patch or change you made to your system? No 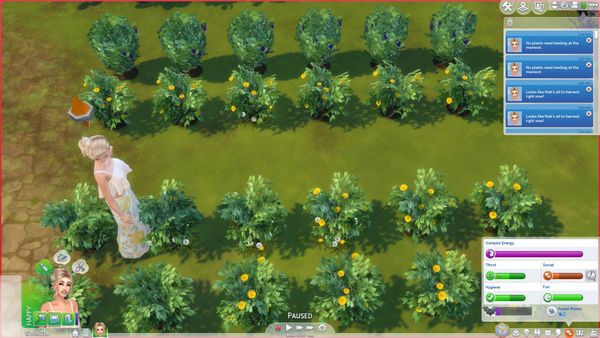 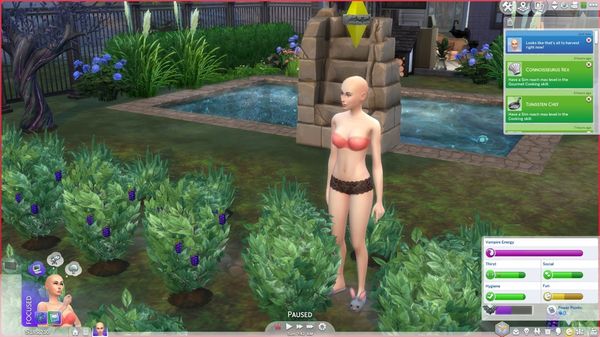 This is the constant message that appears. I have removed the plants and replanted completely different plants and the issue persists even after all custom content is removed and the mods folder is left with just the resource file. I have repaired the game, uninstalled and reinstalled, and to no avail this issue has persisted after a little bit of time. It doesn't always start right off, it's only after a little bit that it starts to happen (and only AFTER the sim has moved lots) but this is only tested once as I have not attempted to duplicate that particular part.

In the picture you can see that there are still weeds on the plants and only one or two have been harvested while the message persists saying there seems to be no more plants in need of harvesting. Even with mods and custom content removed this problem has persisted.

Cache's have been deleted and all the things reset as you can see in the second photo the mods and CC has been removed and the problem persists.