@Tperodactyl Also, I’m don’t think the damage fall off really affects much in the other games. In games such as pubg and cod, the guns do so much damage that you would die if you get surprised at all.
Message 11 of 15 (294 Views)
Reply
0
Highlighted 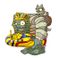 @Sir_Named I don't understand your "...wouldn't be rewarding"

Go on youtube and look up how easy it is to use scripts and such to control recoil. People who are dropping you from afar with R99 and Wingman are NOT that good. 9/10 its a mod of some sort. I never get dropped like that on PS4, yes you can mod on PS4 but it requires more effort, it is not as common as PC.

But still, Im with @Tperodactyl. Guns need to be put in their place. Stop using the R99 like an AR. Stop using the Wingman like a sniper. The anvil hop up for the flatline makes it into basically a wingman, however, the fire rate is MUCH slower, the recoils is MUCH higher, so what if I have a 2x-4x or anything else on it. If I KNOW my bullets will do 45 from a wingman EVERY time I shoot, it won't be that hard to hit someone who is moving slower cause of ADS then me with a wingman. It just doesn't make any sense. People who say "oh you have to be accurate with the wingman to make it deadly at range" um... btw, you have to be accurate with ANY gun at range to make it deadly. You can pick up a kraber and be deadly with that at range, heck its prolly harder than a wingman because of the crazy recoil.

I am honestly trying very hard to understand all you people who think the R99, Wingman, PK and other CQC guns shouldn't have damage fall off, but I cannot grasp your argument, it has no weight to it. It is always a "well you have to be good with it" kind of stance which um yeah applies to every gun you pick up..
Message 12 of 15 (282 Views)
Reply
0
Highlighted

@SolitaryMassacre Well, scripts are cheating. But, they should get rid of the cheating. Nerfing things to the point where it wouldn’t reward players with actual skill doesn’t seem like the best way to go. (But damage falloff still could be a thing.)

I don’t think using the kraber is more difficult because of the recoil. I really don’t see how the recoil would affect anything with the kraber, as it has the lever animation after every shot. Kraber also has a high magnification scope, which is easier to use at a long range than a smaller magnification scope.

In the end, damage fall off would probably be a good thing, but you should also consider the people who are actually able to snipe and control the recoil that well.
For example, if the top player could control the R-99 so they could use it at sniping ranges, should they be able to actually do damage? The answer to this is main difference between your side and the other side.
(Again, scripts don’t count, and are cheating. The devs really do need to fix cheating. )
(Again, I’m not super opposed to damage falloff, but I am pushing to moderate it so that I can still use some weapons at many different ranges, albeit maybe not as well.)
Message 13 of 15 (278 Views)
Reply
0
Highlighted

@Sir_Named So I get it if you are good and such but you throw off the balance of the game. Some people (like myself) can't have super high res graphics. I am lucky to even distinguish a player from the backdrop. So I am forced to use scopes and sites. And I am sure I am not the only one playing on a lower spec computer.

So right away, players with more money can do better and become "top player" because they have an advantage of seeing more detail without a magnification scope, now the game is unbalanced because they can snipe with a wingman and I can't, thus slowing me down when handling my weapon.

That aside, a pistol wouldn't realistically have the same stopping power from 10m to 30m. It unbalances other weapons. R99s become ARs, wingmans become snipers, etc. What is the point in using the other guns then? I personally love hard hitting weapons, I used to run the longbow with a 2x or 2-4x before they limited the sniper ammo (makes it difficult to say the least). But if you use a sniper, with our without a scope, you have all these other affects of movement, being blinded to things up close (because you are super zoomed, so having a scope doesn't really "make it easier" as you have stated) if being zoomed in made things easier, people wouldn't set their FOV to some crazy high number. I was sad they removed the skullpiercer from the longbow. I always went for headshots with it and was able to drop someone.

So my answer is no, they shouldn't be able to do damage because a gun of that type realistically couldn't, it would lose its velocity by the time it reached the person. I guess another way to balance this would to make the bullet drop off much higher for wingman and R99.

But the problem with "devs need to fix cheating" you are fighting an uphill battle. Make it harder to cheat yes, but make it so cheating won't really get you that much. With damage fall off, you limit the amount of damage at ranges, it would be incremental, so like <10m 100% damage, 10-20m 70%, etc (note arbitrary numbers used, have no meaning nor reference to any gun) This allows you to do damage, just not absurd amounts of damage.


PS: I laugh at your comment "...high magnification scope, which is easier to use..." because have you ever sniped?? Most times I don't even use a high power scope, it is much easier to use a 2-4x, that is my fav for almost all guns. I do enjoy the digi threat sniper just cause it has the digi threat.
Message 14 of 15 (269 Views)
Reply
0
Highlighted

@SolitaryMassacreWell, by easier to use, I meant it’s easier for long range. I have sniped, although like you I mainly use 2-4x. But, in general, a higher scope would be better for a longer range.

The higher spec computer thing is the same with all games. I have a terrible pc, so I basically never use it for any gaming. Also, I feel your pain with not being able to distinguish enemies, as I don’t have fantastic sight. In the end, having a better computer does help you, but it’s not exclusive to Apex Legends, and it’s basically been a feature in the gaming community for years.
It’s shouldn’t really be that close range weapons do a lot of damage at far ranges, but as I’ve said, if they are good enough to hit their shots I think they should get a decent amount of damage.
I’m mainly just trying to make sure the fall off isn’t ridiculous or something.

Edit: ALLGREY001 did mention something about the wingman being able to hit long range because of grain. I’m not a gun expert, so I wouldn’t really know, but consider it if you haven’t already.