Get ready for an exciting and icy adventure! Play Snowflake Skill Games, sled down to the Winter Village for Now and Later rewards, and go ice fishing for Freeze Players! Preseason Freeze is here and cooler than ever!

Play 4 Skill Games and 3 Star Games every day to earn Village Points. The path is only playable once per day. Play Skill Game 1 to unlock the other 6 Skill and Star Games. Get 6 Stars across the 3 Star Games to complete one of the Daily Quests.

Play a Daily Bonus Match to earn 100 Snowball Tokens. A new Bonus Match unlocks every day over the course of a week before resetting for the following week. For example, if you log in on Saturday you can play the Matches from Thursday and Friday, but not Wednesday.

Complete Daily Quests to earn Aurora Score and progress down the Aurora Pass. 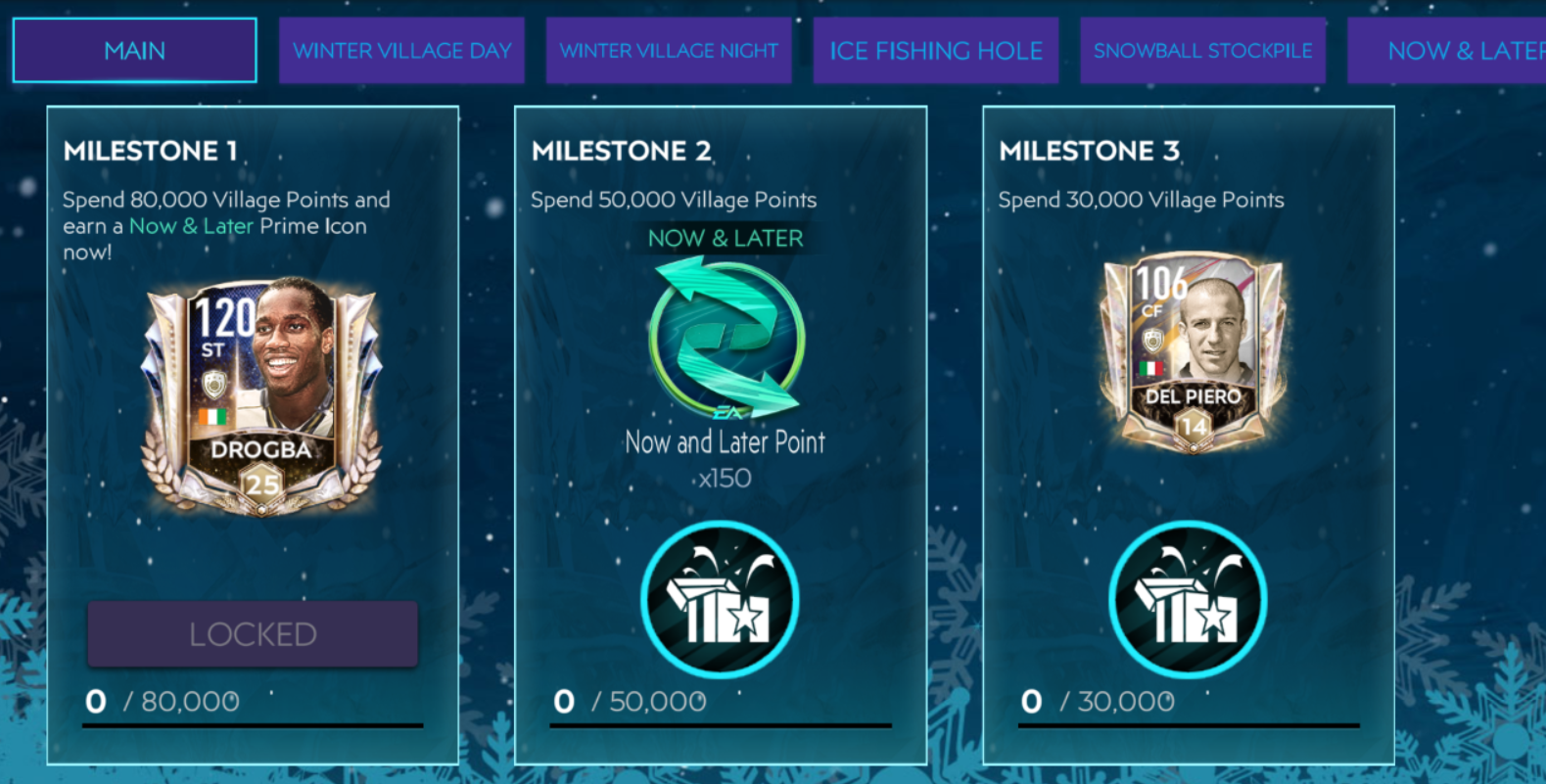 Using your Snowball Tokens gives you progress down the Milestone Path.

Choose between 2 maps: the Winter Village Day and Winter Village Night, each with identical rewards but different players on them. Check out some of the nodes for a random 99+ OVR Villager Player. You’ll find Now and Later Players further down the paths.

Bring your Frozen Lures here to try for the Catch of the Day in 3 fishing spots, each with different rewards.

Check in daily for a Catch of the Day Player or Now and Later Points. There’s two other featured rewards, which could include Village Points and Snowball Tokens.

A new FIFA Mobile season is nearly upon us! This season is the biggest update we have ever done on FIFA Mobile, and the new game version is loaded with upgrades, improvements and additions that we are eager to tell you about. Over the next several weeks we'll be unveiling some of these exciting changes.

While there are many great changes coming to the new season, there are limitations, notably the end of the Legacy Mode which is not compatible with the new game version. This means that the team you are currently using will remain until the new season begins, but you will no longer be able to view or play with it as a Legacy Team in the new season.

We understand if this is disappointing to see. It was a hard decision but we feel all the upgrades that come with moving to the new game version is worth this loss. However, we believe it’s important that your end of season team OVR still matters! You will receive rewards in the new season based on the OVR of your final team. And the higher your Active Lineup’s OVR, the better your rewards!

Please note there will be SBCs available in the Preseason Freeze Event where you can exchange your extra players for Now and Later items.

*Now and Later Players are non-auctionable this season and next season.

We will have more information about what account progression carries over to the new season in the coming weeks!

Stay posted for more information both in game and on our Twitter!

Would you like to share your feedback on the event? Let us know in our Preseason Freeze Feedback Thread.