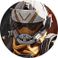 I know it's not a fun topic but Titanfall 1 servers will eventually be shut down.

Knowing this, I want to suggest  that we try and show Respawn how many people actually still care about Titanfall 1 and at least try and convince that it is worth releasing dedicated server files for the game.

With the creation of projects such as R2Northstar (https://github.com/R2Northstar) it is clearly possible to run a dedicated server using preexisting game files.
From my investigating the game, it seems that the main thing missing in Titanfall 1 is a file called server.dll and potentially one called engine_ds.dll (the latter of which was actually initially shipped with the public beta).
(These might well be in a folder called r1_doNotShip\bin\x64_retail referenced in some game files which seems suspiciously like it would contain server only files. Just as an FYI in case someone at Respawn ends up trying to find the necessary files)

Respawn/EA could allow dedicated servers for Titanfall 1 (at least on PC) very easily just by releasing a few key files that are missing from the base installation of the game which would allow modding projects to run dedicated servers.

(Hi any potential Respawn/EA staff reading this! Could you possibly discuss this interally as it would be pretty dope if we could, as fans, help in prolonging the legacy of Titanfall)

Thankfully a project is in the works to revive titanfall but yeah agreed we need servers and lan.

The only problem is, If we DO get DEDI/LAN servers available, the progression will be taken away, and playing TF1 without progression is really boring for most people.