I'm guessing other people have had this problem but I haven't seen a post on it yet, so maybe some of y'all have a solution.

I can't get the game to load. Period. I launch the game, the the launcher pops up, the blue bar fully loads, then the launcher closes and Origin pops back up. I haven't even seen the main menu of the game. This has happened to me on both Steam and Origin (originally bought on Steam then refunded to try on Origin). Below are the following fixes that I have attempted.

The last time I contacted EA Support they more or less said they know it's a problem and to wait for a patch fix. If anyone has any other suggestions, I am all ears because right now I've basically spent $40 on a button that makes me mad. Below are the specs for my PC.

Update on my issue

I am about to open my 5th Support ticket with my game still not launching. My last two tickets had me clear Cache Data for Origins and my App Data, use CCleaner to uninstall Origin and Star Wars and then re-install them, fully updated Windows, made sure both Visual C++ and .Net Framework were updated, and confirmed my PC meets the specs to play the game.

@EA_Straatford I really want to play this game but I am quickly approaching the point where I just want my money back.
Message 2 of 43 (14,018 Views)
Reply
3 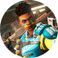 I have the same problem.  Neither Epic nor EA were of any assistance (got the same non-answer from EA, too).  As the Force is obviously NOT with me, I'm likely to just get a refund -- and REMEMBER this experience the NEXT time I plan to buy a game from either entity...

I have something similar - only it was working but now isn't...

@das_spetsnaz Same issue here. It only works for me if I launch quickly after restarting windows. Haven't had the time to troubleshoot what is conflicting with it yet though...
Message 5 of 43 (13,783 Views)
Reply
1

Same issue, Just bought, cant get it working...updated all drivers... Im abouit to ask for refund.

I, too, have gotten a refund.  Don't plan to repurchase it, though.

Mine loads, screen goes black with a yellow box and some writing but its all cut off like its zoomed in so I actually can't read it. I actually blue screen looped because of this. Reinstalled windows and all drivers. Install this * game again and when I try and open it locks up again. Its acting like a 50$ virus from EA.

Mine loads but it takes absolutely ages since last patch. My system is new and in tip top shape, latest drivers etc. Only game that this happens, everything else is super butter fast. I have i9 10th gen, rtx2080 super card. Once game loads its fine, it just takes ages to get there. Can't figure out why.