@BobLazarELE115  Are you in fact keeping fps at 60?  As in, have you confirmed by using the "fps on" cheat or some other framerate monitor?  The graphics chip in your computer isn't overly powerful even by Sims 3 standards, and I don't think it's strictly necessary to manually cap fps, but doing so could still help with performance.

If you haven't already taken steps to do this, or your current settings aren't working, you can try using RivaTuner Statistics Server.  Unlike some other tools, it does need to be running while you play, but it's easy to minimize it to the tray and it doesn't take much in the way of resources.  Choose TS3.exe (for an Origin install) or TS3W.exe (for a disc or Steam install), highlighted in blue; set the framerate limit to 60 in the red box; and set RTSS to start with Windows if you like, so you don't forget to use it. 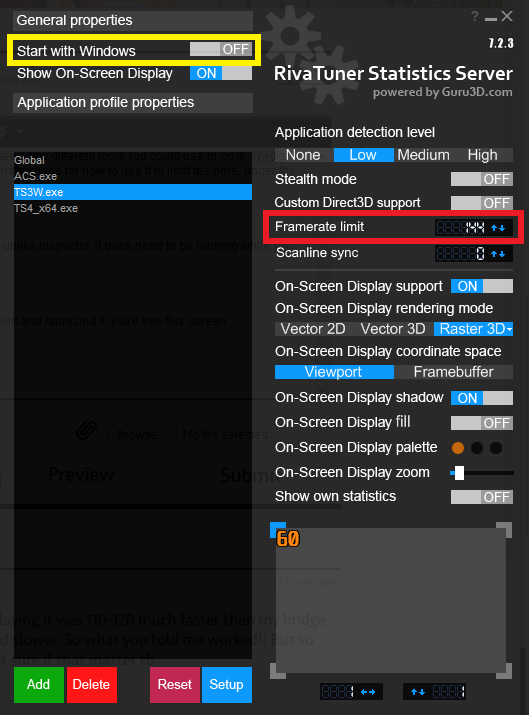 For the crashing, it's entirely possible that the issue is your save, but it's worth testing a new save for comparision.  While there are plenty of potential approaches to fixing a long-running save, and plenty for general crashing issues, there's hardly any overlap.  And your dxdiag doesn't list any Sims 3 errors at all, so I don't even know what kind of crashes you're seeing.  Please try a new save in Sunset Valley, let it run for an hour or so (you can walk away or do other things as long as the game clock is running), and let me know how it goes.

Yes, it's set to 60 fps. I didn't know about the cheat though, right now I was playing on a new game and it crashed while creating some pets. It's coming to a point where it's not even enjoyable anymore. I'm going to try the last steps you told me and update you. I'm sorry for being negative, I really appreciate all of your help.

, (edit) I reset the town in MasterController and let it run for an hour by itself. It did not crash but I did not play. I just let it run, also when I reset the town it took a while because I had never done that before and it reset like 18,000 objects.

@BobLazarELE115  Rendering pets is hard on a graphics card, perhaps more so than any other in-game feature, but I would be surprised if that caused a crash in CAS.  I'd suspect your custom content first, especially if you hadn't tested all of it out specifically while creating a pet.  You can try removing it temporarily, or test CAS in a clean Sims 3 user folder.

The MasterController reset does take a while, but given the age of your save, it's long overdue.  I think the general sense is that it should be run every six to eight sim-weeks, and more often if you're seeing in-game issues.

You don't need to apologize for being negative.  I know it's frustrating when all you want to do is play and you're stuck troubleshooting instead.

Yes, I honestly don't know what it is... I keep getting different issues every time. I'm guessing I'm going to start a new game, I stopped using Overwatch and Errortrap, I also deleted the pet sliders. And it's still crashing, it all started when I started using mods.

@BobLazarELE115  The pet sliders are much more likely to be an issue than ErrorTrap and Overwatch.  Those mods clean up issues, they don't introduce new ones.  It's always possible though that a save is already corrupt or glitchy and that the mods can't fix all the issues.  They can then appear to make things worse as they try and sometimes fail to clean things up.

I will say that a save that's been running with ET and OW in place since the beginning is much more likely to stay stable and playable over the long term.  Those and a few other NRaas mods help prevent errors from accumulating in the first place so you're not stuck trying to repair the damage after the fact.