So you can probably already tell what this is about but let me explain because every situation is different. I haven't played the Sims 3 for a long time and I have it on Origin, anyway, I recently downloaded some package files for custom content and none of it is showing in cas and the "nointro" package doesn't work as the intro pops up and I have to click to skip. Naturally, I searched it up to try and find a solution and I have done the majority of things people tell you to do:

- Delete and re-download the mods file

- Delete and re-download the resources.cfg file in the mods folder

I've done the majority of things people tell me to do and every single time it hasn't worked. That and the fact it takes AGES to load for me to actually check and then I have to DOUBLE check in cas which takes a VERY long time. If you got this far, and I applaud you if you did, I want to specify once again that THIS IS THE SIMS 3 MOD THE SIMS FOLDER AND I HAVE THE SIMS 3 DOWNLOADED WITH ORIGIN. And I feel primarily this is the Mods folder's fault and if anyone has a better one than the one from Mod The Sims then PLEASE help and tell me by replying to this question. Also if I failed to place one of "solutions" that didn't work for me above, bare in mind there were quite a few more, then, really, that's all I'm asking for.

Thanks and goodnight. Or morning... 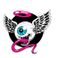 @puzzlezaddict Never mind, I solved the problem-- I needed to click the mod file itself instead of click 'show in folder.' Everything works now. Thank you!!!!!!!!!!!!!

The first thing to do is to verify that you're adding the Mods folder (and everything else) to the correct Sims 3 game folder.  It's possible that you have more than one on your computer, and that the game isn't reading the one you're using.  It's simple enough to verify though: check the last modified date on the deviceconfig.log file.

If its time stamp doesn't match the last time you launched TS3, then you have a second game folder.  In Windows, search for "deviceconfig" in a File Explorer window and take a look at the file path for any of these files you see.  On a Mac, searching might not turn up anything, but the first place to check is iCloud.

If you are in fact using the correct folder, it's a good idea to start from scratch with a clean folder, get your mods working, and then add the rest of your content to the new folder later.  Pull your existing Sims 3 game folder out of Documents\Electronic Arts and onto your desktop, then open the launcher to spawn a clean folder.  Download a fresh copy of the Mods framework, unzip it, place it in the new folder, and delete scriptCache.package.

If this works, you can start adding more mods in batches and testing.  Loading the game should be faster as well, since the new game folder won't have much content in it, but with script mods at least, you'll only need to go as far as the Main Menu.  Any script mod that's detected will be listed in a popup, and if you don't see the one(s) you've added, you'll know that something went wrong.

If any of these steps don't work, let me know, and we'll go from there.  The Framework itself is reliable, and there shouldn't be anything wrong with the downloads, but if you really can't get it to work, you can recreate one yourself and test with other mods instead.  You can also find resource.cfg elsewhere; I'll PM you a link if you need it.  (Direct download links aren't allowed in threads, although naming a mod is fine as long as it doesn't have any adult content.)

I don't work for EA. I'm just trying to help fellow players with their games.
Message 2 of 29 (4,030 Views)
Reply
1
Highlighted

This was very helpful up to the point when I tried to find my config data file and it’s not in my sims 3 folder and I’m a tad confused what to do about that I have attached a picture down below because I’m not sure if I’m in the same space and I’m not much of a computer whizz so I’m not 100% sure how to do stuff. Really hope this makes sense and you can help. 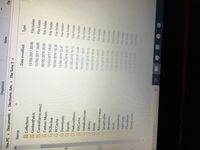 @jazzmiint  Your screenshot is so blurry it's difficult to read.  If you need to take another screenshot, please use the built-in Windows function.  Hit Windows key-shift-S and drag your cursor over the part of the screen you want to capture.  Then open Paint or another image editing app, and ctrl-V to paste the screenshot.

I did manage to see that you're in the correct folder though.  In Windows, deviceconfig would usually be listed below all the folders, so if you scroll down from WorldCaches, you should see it.  Given that your other folders have been updated in the last couple of days, it would be strange if the game weren't reading this folder when it loaded, but it's still worth checking to make sure.

I don't work for EA. I'm just trying to help fellow players with their games.
Message 4 of 29 (3,993 Views)
Reply
1
Highlighted

I took another screenshot and looked over it and it appears I can't scroll down any further and there are no more files after the WorldCaches. Is there anything that can be done about this or is this not supposed to happen? Or any other place this folder could be hiding? 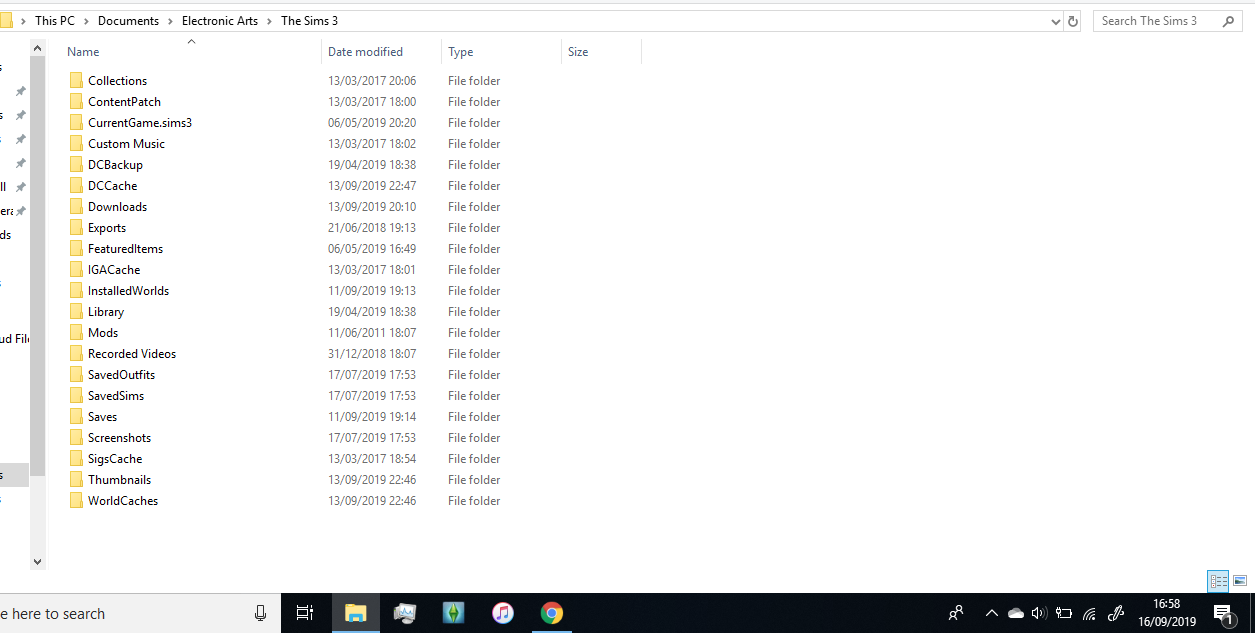 @jazzmiint  In that case, this isn't the correct Sims 3 folder.  If it doesn't have a deviceconfig, it's not being read by the game.  So it's no wonder your mods aren't working either.

You must have one somewhere though.  In the left sidebar of a File Explorer window, click on This PC, then in the upper right corner of the window, type "deviceconfig" without quotes.  You'll see all copies of the file currently on your computer.  Please let me know how many of them there are, their file paths (listed immediately below the word deviceconfig; hover over it if it's too long to see all at once), and the last modified date of each one.

I don't work for EA. I'm just trying to help fellow players with their games.
Message 6 of 29 (3,962 Views)
Reply
1
Highlighted

I only found one file when I searched up deviceconfig on This PC. It's called: DeviceConfig.log and it is a text document. 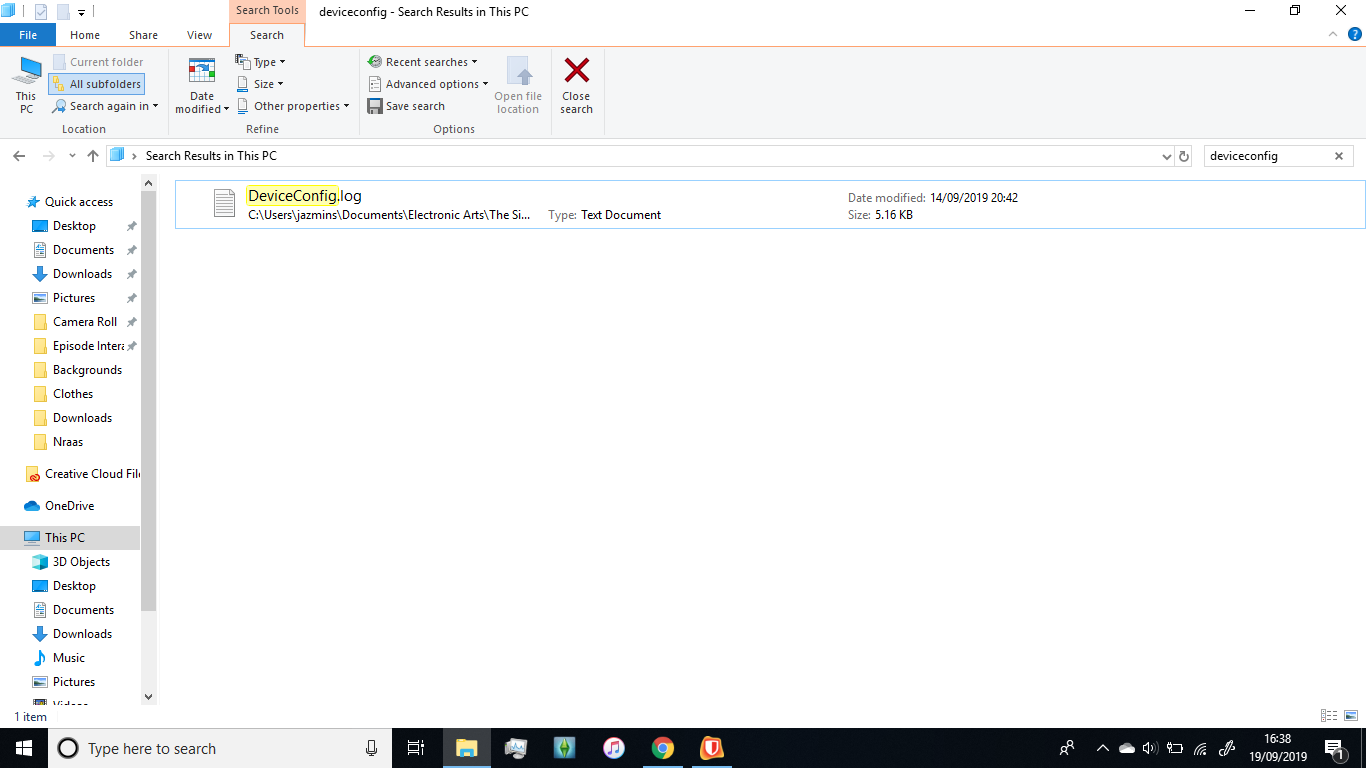 @jazzmiint  That's the folder where you need to put your Mods.  So the full path of your Mods folder will be:

And you'll put your new mods in Packages inside that Mods folder.

I don't work for EA. I'm just trying to help fellow players with their games.
Message 8 of 29 (3,912 Views)
Reply
1
Highlighted

So, you're saying where that text document is, is where I should put all my mods? Or should I move that file into my Mods folder? Because it's not a folder its a text document... so the folder where that is is where I put my mods folder and my mods and packages and etc.... Sorry if I'm being dumb I just have no idea how to do this and you're being very patient with me and I'm incredibly grateful for that.

@jazzmiint  You're not being dumb, just maybe having trouble seeing how things should work.  That's not uncommon at all.  I suggested you search for deviceconfig because every live game folder (one used by TS3) will have exactly one, so that's an easy way to find the folder where you should add your mods.

The Mods folder should be in the same place as deviceconfig, as in, also in the Sims 3 folder where you see deviceconfig.  You can just drop the Mods framework into that folder, delete scriptCache.package, and test to see whether NoIntro and NoBuildSparkles show up.  If they do, add the other mods you want, delete scriptCache again, and test.