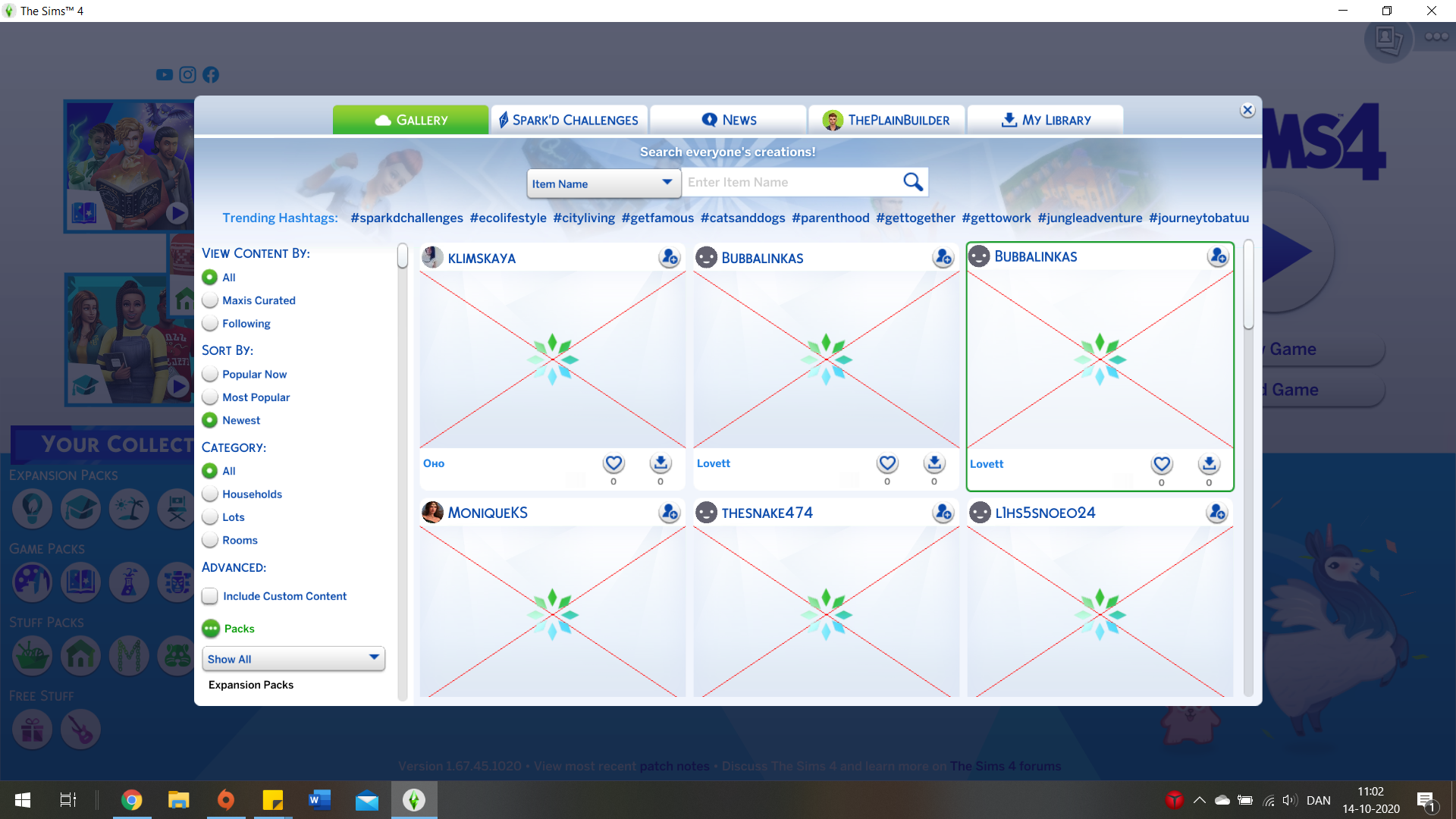 My gallery had looked like this for 19 hours.
At first I thought it was an error, and that gallery was just down, but no one else I've talked to is having this problem.
I tried waiting, but 19 hours in, it still looks like this.
I have repaired my game, but it didn't change.

I have no clue who to contact or what to do

Mine looks like that as well. And then, Connection is Required. About every two minutes or so.

Have followed the instructions. Will reply again after I open Sims 4. Thank you.

Followed the instructions given. Unfortunately, no change in program behavior.

So, on Win 10 with Avast, I have Gallery problems. But, on Win 8 with Avira, I have no problems.

Product: The Sims 4
Platform: PC with Windows 10
Which language are you playing the game in? English
How often does the bug occur? Every time, 100%
What is your current game version number?  1.67.45.1020
What expansions, game packs, and stuff packs do you have installed? My First Pet Stuff, Holiday Celebration Pack, Strangerville, Tiny Living, Seasons, Get to Work, Vampires, Spooky Stuff, Romantic Garden Stuff, Fitness Stuff, Bowling Night Stuff, Discovery University, Outdoor Retreat, Island Living, Cats & Dogs, Realm of Magic, Laundry Day Stuff, and Jungle Adventure
Steps: How can we find the bug ourselves? Attempt to take a screenshot - look at my pictures
What happens when the bug occurs? When you click the in game screen capture, you hear the shutter sound and the dialogue box pops up blank. Nothing is saved into the screenshots folder either.
What do you expect to see? I expect to see the screen shot I took since I have the pop up enabled, that way I know it saved.
Have you installed any customization with the game, e.g. Custom Content or Mods? Not now as I've removed them. Previously just two tattoos.
Did this issue appear after a specific patch or change you made to your system? Yes, I think...
Please describe the patch or change you made. Noticed this today, yesterday my screenshots were fine until about 4am EST as I have those. I realized today that anything I took yesterday afternoon is not there, previously I thought the boxes were white as my pc had just not loaded it fast enough before I closed them but I now know none of those screen shots too place. There may have been a PC update...I forget as I was sleepy, sorry.

1. Repair the game - have tried this twice

2. Checked if game is up to date - already was but did anyways

3. Deleted the old Screenshots folder and created a new one after checking it was the one listed as the save location in game - has correct location listed

4. Built a new house and made a new sim to see if it was somehow my lot - no change.

5. Resetting all my settings to default and checking - no change

6. Removing the two tattoo mods - I have had these downloaded a month and no problem before but wanted to check - no change.

7. Removed my whole Sims 4 folder from Documents to a different location and redownloaded the game + all packs - still having the error even with a brand new download.

8. Checked if I have Windows Defender Antivirius - I do not, I also do not have Avast.

9. Went into my AVG settings and added in Sims 4 as an exception in case as I saw that mentioned - no change.

I am completely and utterly stumped at what is causing this in my game and I bit discouraged as I have spent 4 hours trying to fix it. The only antivirus I have is AVG which I have had for years without an issue and I do have the Windows Defense Firewall but not the Antivirus. I am baffled at what happened between 4am EST and 1pm EST on October 14th that messed up my screen capture. One thing that does still happen is the photos will appear in the Sim's inventory.

If anyone has suggestions I am open.

Re: In Game Screen Capture Not Saving Photos.

Ack. So I figured it out!!! Apparently AVG has a different blocked area from the exceptions in the panel and because I was focused on finding the exceptions I did not notice it. My game is now fixed and I wanted to share if anyone else has this problem. Though was there a small update on the 14th? I am baffled why it suddenly started doing that on my PC.

@Wallisdj Where in Avast did you add the exceptions ? I did some self-testing yesterday and it seems there's two places where you need to add stuff to Avast.

- Exceptions
- Ransomeware Shield (especially if you have strict mode)

Re: In Game Screen Capture Not Saving Photos.

@AsketiI I tested Avast yesterday and that has the same area. It's for Ransomware protection. Maybe AVG/Avast just added that part newly ?