Bills are Bugged on my Lot 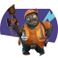 I just started a new character on the Tangled Flat lot in Sulani. When my first bills came they were surprisingly large, around $800. I had to sell the tv I recently bought in order to pay for it. I thought this was strange because I recently moved a  veteran family with high-end items into a much bigger lot and built a four story house there, and their bills were only around $400.

The reason the game gave for the penalties in bullet point was for Bill Surcharge Items. This seemed odd, because this was a new, stock house with nothing unusual. So I started eye-dropping items to see if anything had any outstanding descriptions, and still nothing was unusual. While experimenting with deleting items and checking the bills, it seemed like any item that had the "Eco Footprint Green" trait was contributing to this penalty for some reason.

I started experimenting more and that wasn't the weirdest part.

If I saved the lot and placed it on another lot that didn't have this tax penalty issue, it would bring the tax penalty issue with it. However, if I demolished the house at Tangled Flat, and started building a new house, even with the exact same items, they would no longer incur any tax penalties (and I have to demolish the whole thing first; deleting an item and replacing it on its own doesn't fix the penalty unless I bulldoze the entire thing).

At first I thought that would be my workaround: rebuild the house manually as best as I can. However, I then noticed a secondary bug. Even after demolishing the house and starting to build a new one, when I go to world view, it's still showing the original house at Tangled Flat instead of what's actually on that plot.

For the record, while experimenting, I also noticed a tax penalty problem in Ohan'ali Town at Lagoon Look and Kin-Ship, but not at Chieftain's Villa.

Also, a couple of other notes. The "Build Mode Items Grant Gameplay Effects" Gameplay Option doesn't seem to affect this problem one way or the other. I also don't own the Eco Lifestyle expansion.

Edit: I decided to just deal with the bills for now, only to discover another layer to this. The tax penalty seems to be increasing constantly over time, even if my Sim doesn't do anything but sit around for the day.

Edit 2: Since I now discovered that the penalty increases over time, I wondered if, in the situation where I demolished the house and removed the penalty, if the penalty would return over time. I attempted to pass the time four different ways from a fresh save each time. One with just an empty room, one with only Eco Footprint items, one with only Water items, and one with only Power items. In all cases, the penalty did not seem to return.

This seems to be another reason that demolishing the house and starting over is the best option. It's a shame there's that secondary bug, because while it's infinitely more innocuous on the surface, without knowing why it's happening it may be just as much trouble down the road.

This is because you are not living up to the enacted NAPs. Check what is enacted and what you must do to live up to those NAPs. You can repeal the NAPs you don't like.

I do not work for EA or Origin. I am a player like you that enjoys helping others with their game.
Message 2 of 7 (108 Views)
Reply
0
Highlighted

Do Neighborhood Action Plans exist if you don't have the Eco Lifestyle expansion? I don't see NAPs under the Simology panel and the time period in which I read you can vote on them has no option for me on the mailbox.

No but you mentioned "Bills breakdown" and "Green Eco footprint" which are Eco Lifestyle. Was this a lot you got from the Online Gallery?

I do not work for EA or Origin. I am a player like you that enjoys helping others with their game.
Message 4 of 7 (86 Views)
Reply
0
Highlighted

Nope, I didn't import anything. It was a default Sulani one. I'm not using any mods or cheats either, in case that matters.

As far as I can tell, some Eco Lifestyle elements like the Bills Breakdown and Build Mode Item Traits were part of a universal patch. From what I've read elsewhere, another bug I've encountered involving trash cans filling up permanently and forcing you to replace them outright is a bug introduced with Eco Lifestyle mechanics, but since I've already seen that bug reported and it isn't affecting this lot I didn't bring it up here before (also, it's trivial to ignore, just a bit annoying). I'm guessing my issue is a similar unforeseen interaction with Eco Lifestyle additions, but I don't think it's an intended one.

For now I moved my Sim to Caldera Camp on Mua Pel'am. It also had a tax penalty problem when I moved in, but the demolish and rebuild trick worked there. Unlike Tangled Lot, the world map actually updated with the current house instead of always displaying the original (which incidentally implies those bugs might be unrelated after all) so I didn't feel like I was risking a bigger issue down the road.

Do you have any Mods or CC? If so move your Mods folder to the Desktop and delete localthumbcache.package. See if that helps.

I do not work for EA or Origin. I am a player like you that enjoys helping others with their game.
Message 6 of 7 (60 Views)
Reply
0
Highlighted

I am not using any mods or custom content. I'll go check the cache.