We are aware that some Retina display Mac players wish to set their resolutions to the highest possible settings.  These higher resolutions were disabled from the in-game options due to performance concerns.  However, players can override their resolution settings by using the  “-r” command before launching the game and will need to make these adjustments in the Origin client. Please see the detailed description below.

Please note, this is an unsupported command, adjusting your resolution settings may cause some adverse effects with performance such as out of memory warnings or instability during gameplay. By modifying this setting you are accepting the possibility of performance related issues.

This guide will allow you to manually modify your resolution should you want to use Retina display capabilities: 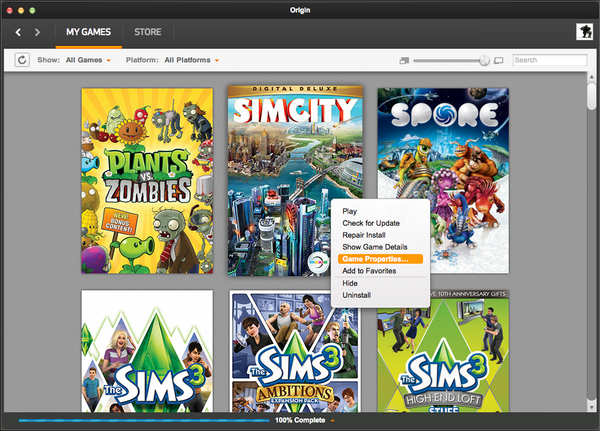 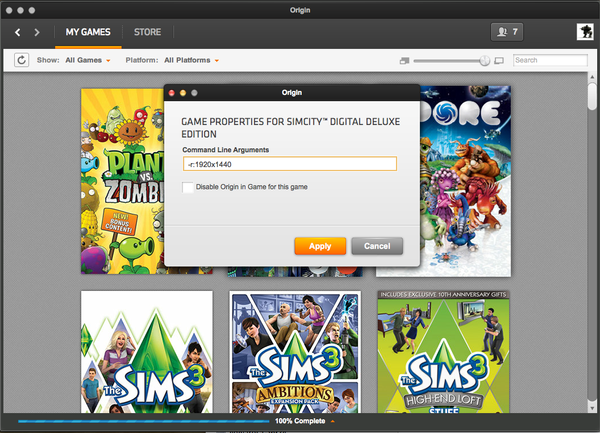 In the example above, 1920 is width and 1440 is height. Adjust these settings to your desired resolution setting.

You may need to lower other graphical settings to accommodate the resolution change and to ensure continued smooth performance.

If you want to remove or modify the setting simply go through the steps above and adjust the setting to a new resolution or delete the command line text and click APPLY.

We are continually looking at ways to improve performance through future updates on both Mac and PC.

ok, i dont need retina resolution, i need performance on whichever resolution on my retina MBP

This is not what we want.

I find that the resolution does goes up -- technically -- resulting in impaired performance.

But the game assets remain low resolution, so the positive effect is minimal. You don't get a crisp UI; you can scale it down to a lower size but it's still pixelated.

Can someone from Maxis/EA offer some recommended settings to try? I understand that this will still be 'unsupported' and 'at your own risk'.

Although this command does change the resolution, the performance remains unplayable. I say REMAINS because even at 1920x1080 the game frame rates are low enough to be counted at 2 fps. This is using medium settings.

I have played the PC version on my Win 7 bootcamp partition at full settings and full resolution without issue.

Please get this sorted.

I dont want to sound ungrateful for EA here. I apreciate all the hard work set forth by your staff.. but seriously?

Mac's are much easier to beta test for.. there is far fewer potential configurations than for a PC. each year there is generally 1 generation of each device, with maybe 2 options for processors or video cards. i dare even say that apple tipped their hat at the newest resolutions of their screens at WWDC (see mavericks background size 5120x2880).

how difficult is it to know that those with retina displays want to play at retina resolutions?

1. on my 27" IPS display 2560x1440, the option for that doesn't exist. when i force the resolution with the -r command, the performance resembles playing SimCity on an atari 2600.

my specs aren't bad at all. i'm currently running the top of the line 2013 Retina MacBook Pro, specs as follows:

i was required to downgrade to 10.8.4 from 10.9 (beta)  due to the fact that Origin can't support 10.9 without posessing a Masters Degree in computer science.

Now i completely understand all the nay-sayers out there that say, if you want to game, buy a PC. but take this into account, on the same day SimCity is released, so is bioshock infinite. one is playable, one is FUN TO PLAY. both are very graphically intense games.. does simcity need a little more BETA time?

The problem is even if you move up the resolution the UI elements look horrible. I think that's what we're asking for when we want Retina support. People with non-Retina screens aren't seeing the blocky elements that we see on a Retina display. It's pretty ugly looking. And for some reason with Boot Camp I don't seem to have this issue.

An iMac with 2560x1440 is NOT a retina display, it is a normal 72dpi LCD that has that many pixels because it is 27' in diameter. We must not get confused with this issue. The developers need to sort out the resolution for 'normal' Macs and get then performance equivalent with that of PCs ASAP. If they don't, they will suffer (more than they have already), from distrust and lack of future support.

I personally am only hanging on here because I really like the new SimCity when I play it on my Bootcamped iMac. I just wish the dev team had had as much respect for the Mac community as the old SimCity games did.

Thanks for the tip, and thanks to EA for even bothering with a Mac version of SimCity, I think that we Mac users really appreciate not feeling forgotten.

Unfortunately, as many have mentioned, I am also experiencing performance issues. I am using a 15" rMBP (i7 2.6GHz, 16GB RAM, 1GB Nvidia 650M, running 10.8.4). I've put all graphics settings at Medium, frame rate at 30FPS, and resolution at 1440x900, the game is extremely laggy. Just clicking on UI elements seem not to take, I'll have to click on a dialog box multiple times to accept it in many cases.

The funny thing is, if I use the keyboard commands it seems fairly smooth just panning around? I am thinking there is something up with using the trackpad on the rMBP. If I Click and hold to pan the camera, it doesn't do anything, and when it finally does it is extremely sensitive and the camera spins in circles. I've also had what seems like the mouse get "stuck" on the edge of the screen (despite it not being stuck) and the camera then constantly wants to move in that direction. I have to restart the game in this case, and it has happened multiple times.

I seem to be getting a better overall experience just with the game in windowed mode, the "mouse scroll" problem I described above certainly does not happen. But the performance and graphics quality is fairly poor.

I know that Macs aren't quite up to par for gaming software wise as PC's (No DirectX, etc), but I did expect better with this. I certainly hope we will see some updates soon to address some of these issues.

And for reference, using Bootcamp on the same exact laptop, I am able to play with no problems with High and some Ultra settings with the resolution at 1080P. No trackpad sensitivity/scrolling issues either.