barrel of the nonsense

this will be kind of a logical debate

so please put your love and belonging to sneaky heroes aside, and let's discus this

there are many cards that are controversial in the game , that people think they are very OP comparing to their cost

every card comes to a a dead end in the discussion between the one who use it and the opponent , one thinks it's definitely fair and the other thinks it's absolutely not

except that card, no one will ever dare to say it's fair

- a card gives the smallest and weakest zombie the power to have attack like 10000, kills any plant however how strong it was 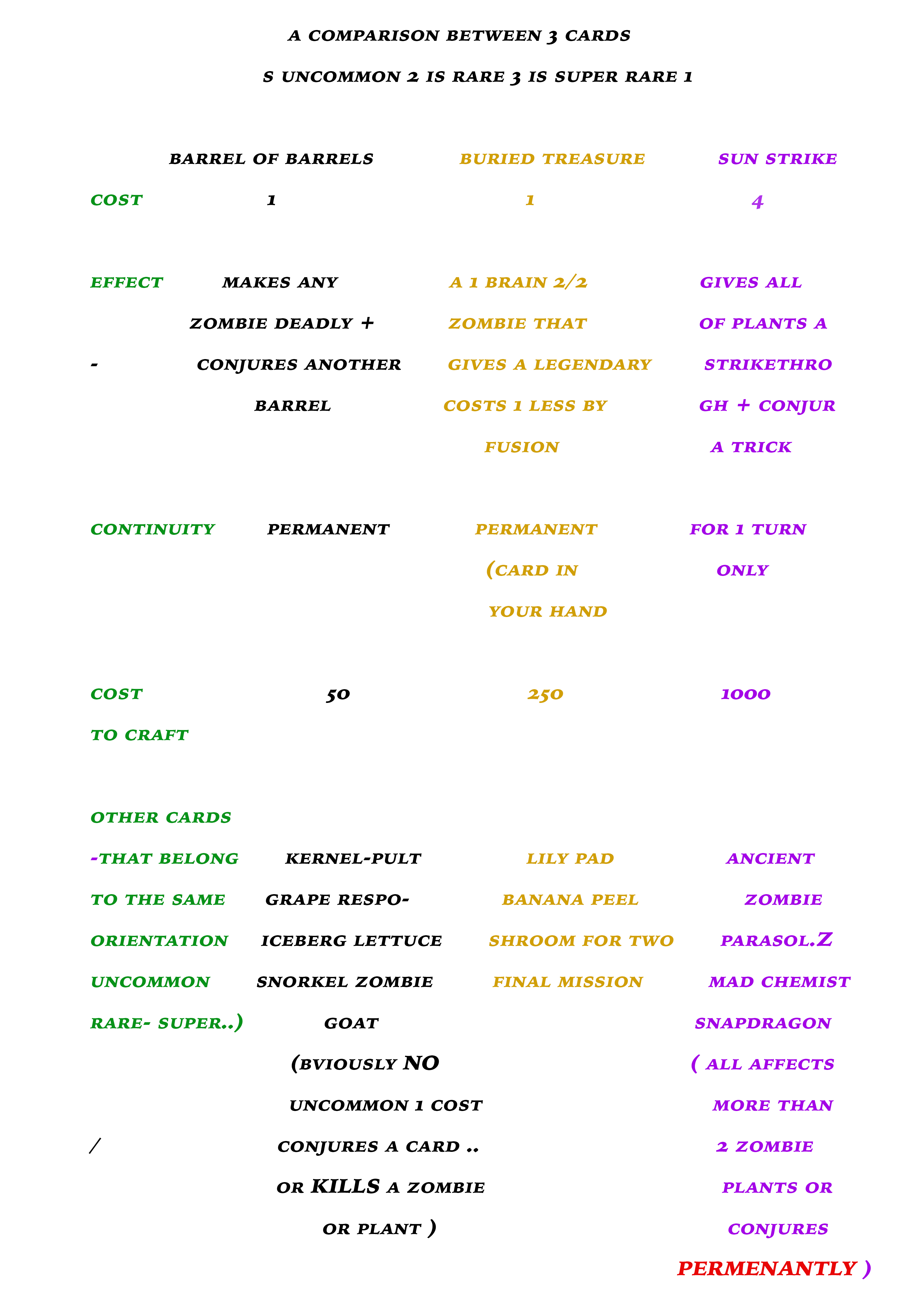 - that card belongs to a class that is able to move around the board " sneaky " , so it will kill an powerful plant , not just the one facing that zombie

- that card is unfortunately " uncommon " .. comparing to it's very very good abilities it's not legendary , super rare or even rare .. so it will cost was to much to play

i really don't how this thing was priced , a " kill any plant"  card that costs only 1 brain

where the closest cards to such thing are super rare or event card " rocket science and shamerocket " costs 3  and the only direct kill cards in the game " squash and fertilisers " costs 5 .... AND NONE OF THESE CARDS CONJURES A CARD

but, every direct kill card has conditions too ,  rocket science and shamerocket only affect cards that are 4 or more

squash and fertilisers can't affect untrickable cards , deadly can though ...

we can discuss it .. but it's absolutely UNFAIR

here's a comparison i've made between some tricks that have an effect and conjures a card ... i hope anyone of the developers would listen tho..

Deadly cards are the main reason why I went to Solar Flair.

90% of the time i play as solar flare , but that doesn't change the fact that this card is so OP and carelessly designed

Sneaky can move, it’s true. Using smoke bomb most of the time. Smoke bomb is a tempo card, so now you’re 2 for 1- ing and sacrificing a tempo play to kill a plant... yeah, that’s fair.

What your analysis fails to take into account is the fact that in order to trade up (bad zombie for good plant), you still have to spend a zombie. So Barrel is not a kill spell + a conjure. It’s a zombie + a trick for a conditional kill spell + a conjure. The condition is usually that the plant player tries to trade up by playing a good plant AFTER you have placed a bad zombie, or failed to protect a plant to which a zombie was in opposition.

Barrel has the potential to be better due to its lower cost.

Eyespore has the potential to be better due to its having fewer conditions, and the fact that you have an open lane for face-damage after placing your plant.

Barrel gives you a random card... which means its overall utility when all is said and done is random. Random doesn’t mean “good”... although it does mean “sometimes good.”

Barrel doesn’t make the cut in many of my sneaky decks b/c it’s also a dead card when you don’t have a zombie on the field (it’s completely unplayable). When you’re playing, say, berries (which are popular right now), you don’t want a card that you want to play on small zombies... because your small zombies never stick.
Message 4 of 10 (556 Views)
Reply
0

hey hey .. you got a very wrong point , " barrel of barrels " is not a game winning card , or at least it's not supposed to do , it's more like a supporting card

I MEAN, you are playing a whole game with zombies and tricks that you can win by moving around and strikethrough and doing tons of things without using a 1 cost trick,  it's a game of 40 cards and the more valuable cards are the most useful ( supposed to ) , so we are not talking about a necessity here.. it's a 1 cost uncommon trick

but it does change the whole game

i'm not complaining about it's existence

i'm complaining about it's price , comparing ti it's classification as just uncommon and abilities for killing any plant and drawing a card ( another barrel that can be a barrel of barrels again )

it can be 1 but super rare and draws another barrel

and yet , i repeat , NO 1 COST UNCOMMON CARD IN THE WHOLE GAME DRAWS A CARD , and this kills a plant too !!!

and by the way, eyespore isn't a good card , many times you want to kill a zombie that is facing a weak plant , not in an empty lane ( frenzy and strikethrough ) , and it costs 2 , and it doesn't draw  cards , and you need another plants to play , so you need more suns ( barrel can be played on a plant already played so you don't need more brains ) , and yet it costs 250 to craft because it's rare .. barrel of barrel costs 50 ....

and by the way, i can tell 100% of sneaky decks use barrel , i can place my bet and if not i will delete the whole game

IMO the rarity of a card (maybe excluding legendary) shouldn't make too much difference as to how powerful it is. All that does is increase the pay-to-win aspect of the game. I would agree on some points made by both of you. I think upping the cost to 2 brains would still make it playable, especially with the conjure, but anymore would probably be too much. I very much doubt that even close to 100% of sneaky decks use the card though. I've had experience to say otherwise.

Shamrocket, etc. are conditional... but they are also 1 for 1s that empty a lane. They can be used defensively, aggressively, or both, and don’t require another card to use. They are IMO more vetsital than Barrel at a higher cost.

Ultimately, I don’t think Barrel is shifting winrates or it would have been dealt with by now. It is not strictly better than other removal cards or other utility cards. And being conditionally good is not a reason for nerf.

Play zombies for a bit, draw a Barrel in a Cyclecap matchup, and you with probably appreciate the limits to the card.

@UniVoidz thank you for that rarity comment. I fear if we keep going at our present pace, the only cards worth playing will be impossible for budget players to afford.
Message 8 of 10 (524 Views)
Reply
1

One more point. I like conjure cards because they have a lot of flavor... but a conjure is almost strictly worse than a card draw. If you’ve built well, a card in your deck is much more likely to synergize with a card you’ve played from your deck than a random card is.

The only scenario where a card draw and a conjure are the same is when you’re trying to complete the mission “draw an extra card.”
Message 9 of 10 (523 Views)
Reply
0

Here is a sneaky deck I posted previously on “These Decks are Fun.” You’ll notice Barrel did not make the cut, despite the fact that I play a card that makes conjures cheaper AND a Dino-Roar legend.

I do not require you to delete your game, however. Please continue to have fun.