I spotted PowerToss because he beat me with his usual unfeasible high score with his all level 5 profile (i will be revenged!) And we now know he is YU WEI WEI (ha ha!) according to the EA list of almost 10,000 names that they use to protect our identities. (I'm surprised he didn't use blover as his Arena avatar).

We also know that FantastiXxPVZ is known as victoryGlory because of Blovering Skill's sharp eyes spotting a Utube post.

What i suggest is you post a screenshot with a ZERO score and a really weird lineup from the start of the tournament with your league so it can be EAsily spotted throughout the tournament. 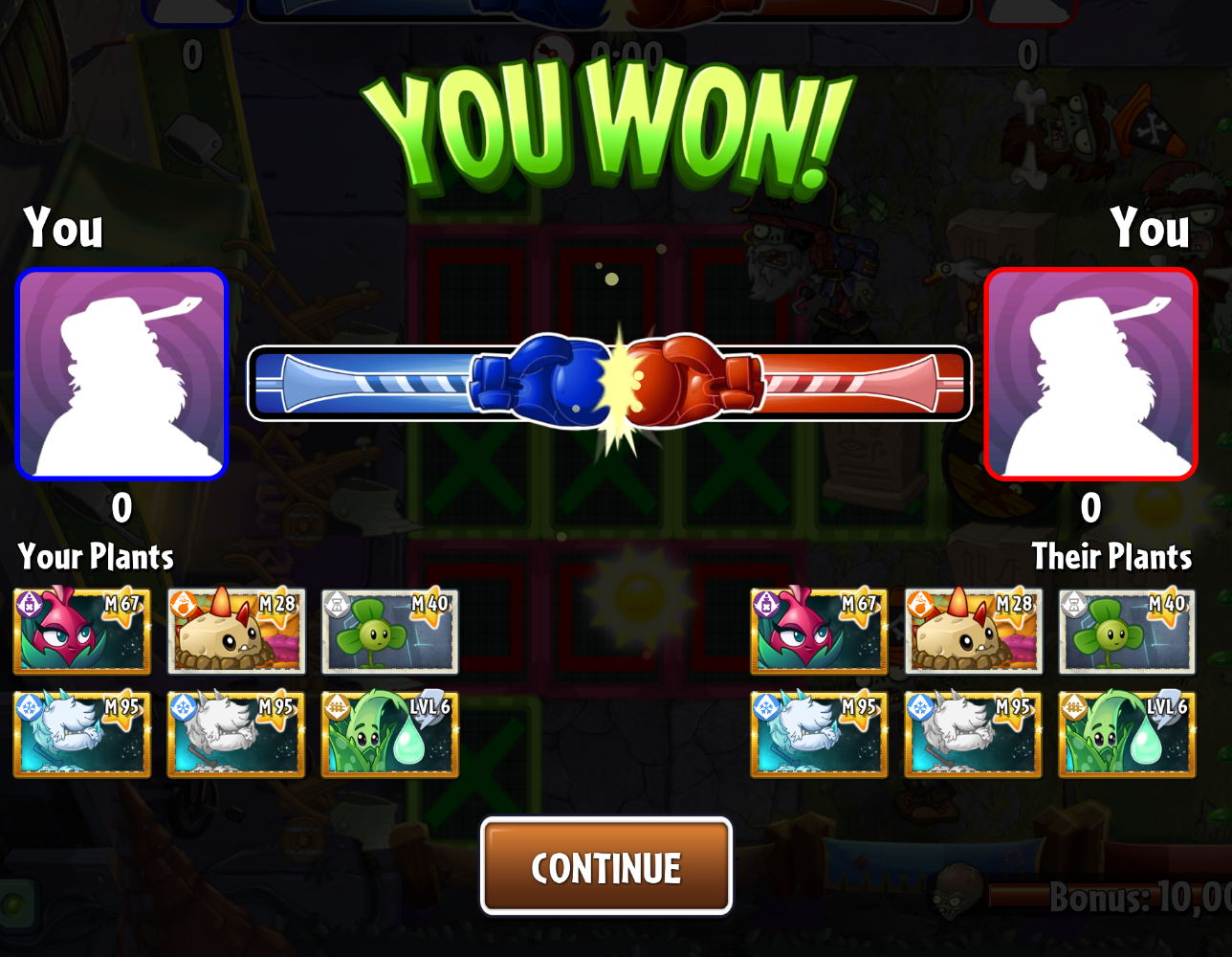 @MAGICDAVESHROOM You can easily spot me. I'm the one using the brain avatar.

I thought you used a half  a brain avatar?🌝

@MAGICDAVESHROOM No. That would be the player called YOU.
Message 4 of 154 (2,032 Views)
Reply
3
Highlighted

@MAGICDAVESHROOM This doesn't really work since it is not the match you play during practice that is saved.

Is it possible to play against your own replay?

You cannot be paired against your own replay.

Can the replays you face come from another league?

The replays will always be from your league's bucket. There is no mixing as that is inherently unfair and removes the point of having leagues in the first place.

Is every game played by a player saved as a replay & available in the replay bucket?

No, only one replay is saved per person on the server. Every time a match is played, the new replay is uploaded to the server & replaces the last one.

Does every battle have a winner & a loser?

No. When you win a battle there is no loser at all. There is not a player on the other end of the battle against you. It's just a replay that was downloaded from the bucket of replays available in your league.

I know practice matches won't show up in tournament, i just did that as a placeholder until the new tournament starts.

If you play a ZERO point match with a distinctive lineup then it will be used throughout the week as Haem has told us that EA uses the first couple of hours play as the recordings for the rest of the week.

I probably have played against most of you already but wouldn't have recognised anyone.

It means entering early but i shall zero point a match with a distinctive lineup from three of my profiles, L1, L5 and high so if anyone spots one let me know.

I will replace the placeholder screenshot when tournament starts.

@MAGICDAVESHROOM I think we've had that discussion before

It is not your first game that it used throughout the week. Every time you play a new match the "old" replay will be overwritten.

@MAGICDAVESHROOM I think our best shot would be to join the tournament at the exact same time. Since you already know my EA name you can easily find me. I'd be up to give it a try, just give me the time...and don't worry I won't compete for first place

I hadn't read that, i assumed that all the replays from the first couple of hours would just keep on being recirculated to everyone in your league except whoever made it.

I could just do one zero point one tonight and then not play until tomorrow to give it a chance to circulate.