Product: Madden NFL 19
Platform:PC
Which console generation do you have? XBOX One
What is your gamertag/PSN ID?
Date/time issue occurred 1-4-2019
What type of issue do you have? Other
Which mode has this happened in? Franchise Mode
Which part of the mode? Cloud
Summarize your bug When I custom playbook with Giants Pat S. Playback and try to change audibles for Singleback Dice Slot the audibles I select will not be used. Singleback Dice Slot is actually called just doubles in Pat S. playbook. So when I try to change an audible it changes the formation name to Dice Slot, which is fine, but I cannot change the audibles. When I select 4 audibles it might get 1 correct and then seemingly selects 3 other random plays.
How often does the bug occur? Every time (100%)
Steps: How can we find the bug ourselves? Go to customize playbook. Go to NY Giants Pat S. playbook. Change audible in singleback Dice Slot. Save as a custom Playbook. Go to practice mode and run a play in that (Singleback Dice Slot) formation, try to audible and notice the audibles are not what you saved in your custom playbook.
What happens when the bug occurs? I get audibles that I did not choose as selections.
What do you expect to see? I expect to see the audibles I picked.
PS4 Crash Reporting: Please copy the text you put in the crash report here.
What is the AMD or Nvidia Model Number of your graphics card?
Enter RAM memory size in GB

Formation not available for custom playbook

I am trying to build a custom playbook but there are several playbook not available. In articular, I would like to incorporate the various Split Far and Near formations but they are not available. It there something I'm missing?

How many total plays do you have in your custom playbook?

Meaning when you go into a game or practice mode select a play from Singleback Dice Slot and then try to audible, the correct 4 plays you customized will not be there.  It could also have something to do with how the formation is named completely different.

If I play as the Giants and use Pat S. playbook uncustomized I have a formation called Doubles.  If you go into custom playbook using Pat S. book as the basis there is no formation in there called simply doubles, its actually called Dice Slot.  There is also a zone run play that's called zone run when looking at the play in the custom play menu, but in the game this play shows as HB Blunt Dive.  So there is some strange naming issues going on in this formation.  Once you customize the formation at all by changing an audible or anything the formation changes from Doubles to Dice Slot and the Zone Run play Becomes HB Blunt Dive.  I don't know if these naming oddities have anything to do with the audible issues, but they might.

That's very possible and a great point to bring up. I asked how many plays you had because we've seen some situations in the past where if you had over 100 plays it caused some formations to not show up.

Thanks for the contribution we'll pass this along to the team.

I’ve had the same issue with the San Fran custom playbook. I edit the audibles, then when I start a game it shows 2-3 of them and then just blank slots for the rest. I’ve edited and used different plays probably 20 times now. It’s annoying to try and edit your audible at the start of every game, then when you forget you audible and it’s not the right play and you waste a time out 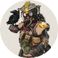 Did this issue ever get resolved? This is happening in 21, never had this problem in 20. (on ps4)