The Planet Trembles in the World's Edge map update

The Planet Trembles in the World's Edge map update

After months of aggressive mining, World’s Edge is overmined, overburdened, and pushed to its limit. Learn more about our latest map update.

A metamorphosis has come to World’s Edge. After months of aggressive mining by the Harvester, the land is overmined, overburdened, and pushed to its limit. The earth has fractured and erupted as nature is reclaiming what’s hers. Hammond is scrambling to contain the damage they’ve caused. They’re using weather controlling machines to rapidly cool the area to sub-zero temperatures at the Climatizer and building a Lava Siphon to stabilize the caldera. The struggle between the inevitability of change and humankind’s arrogant attempts to control that change can be seen across World’s Edge.

Hi, I’m Garrett Metcalf, Senior Level Designer on Apex Legends, and today I want to walk you through the changes coming to World’s Edge in the Emergence update.

OUR GOALS FOR THE EMERGENCE UPDATE

For the Emergence update we wanted to retain the design philosophy of World’s Edge as much as possible while improving things with fun, fresh new gameplay spaces and experiences.

Let’s start by looking at what used to be the Refinery. The Refinery has now been wiped out by a molten lava fissure and replaced with a much bigger POI called Climatizer.

The idea here is that Hammond has constructed massive cloud seeding towers to cool down World’s Edge, and this new POI features the necessary equipment. 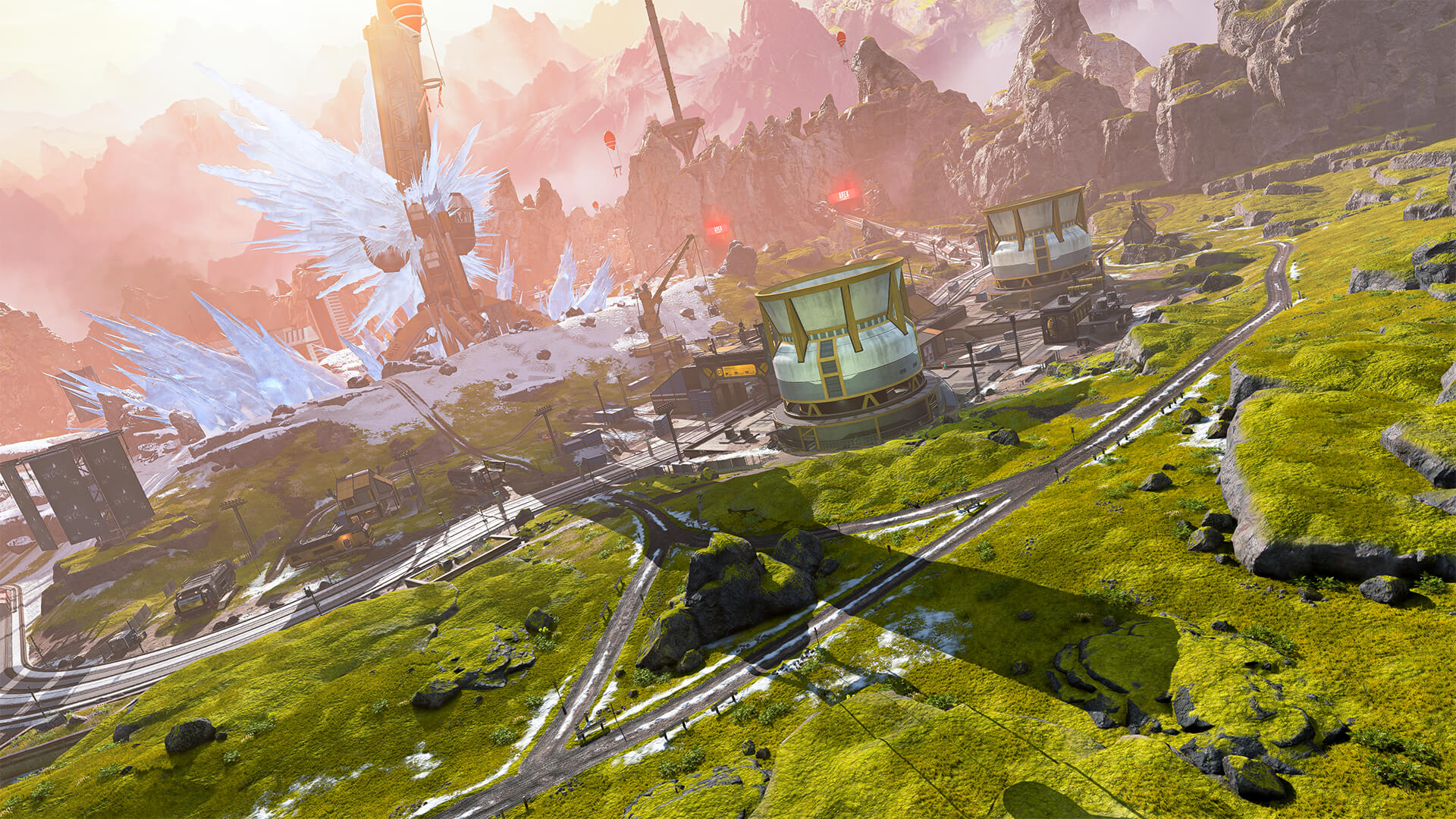 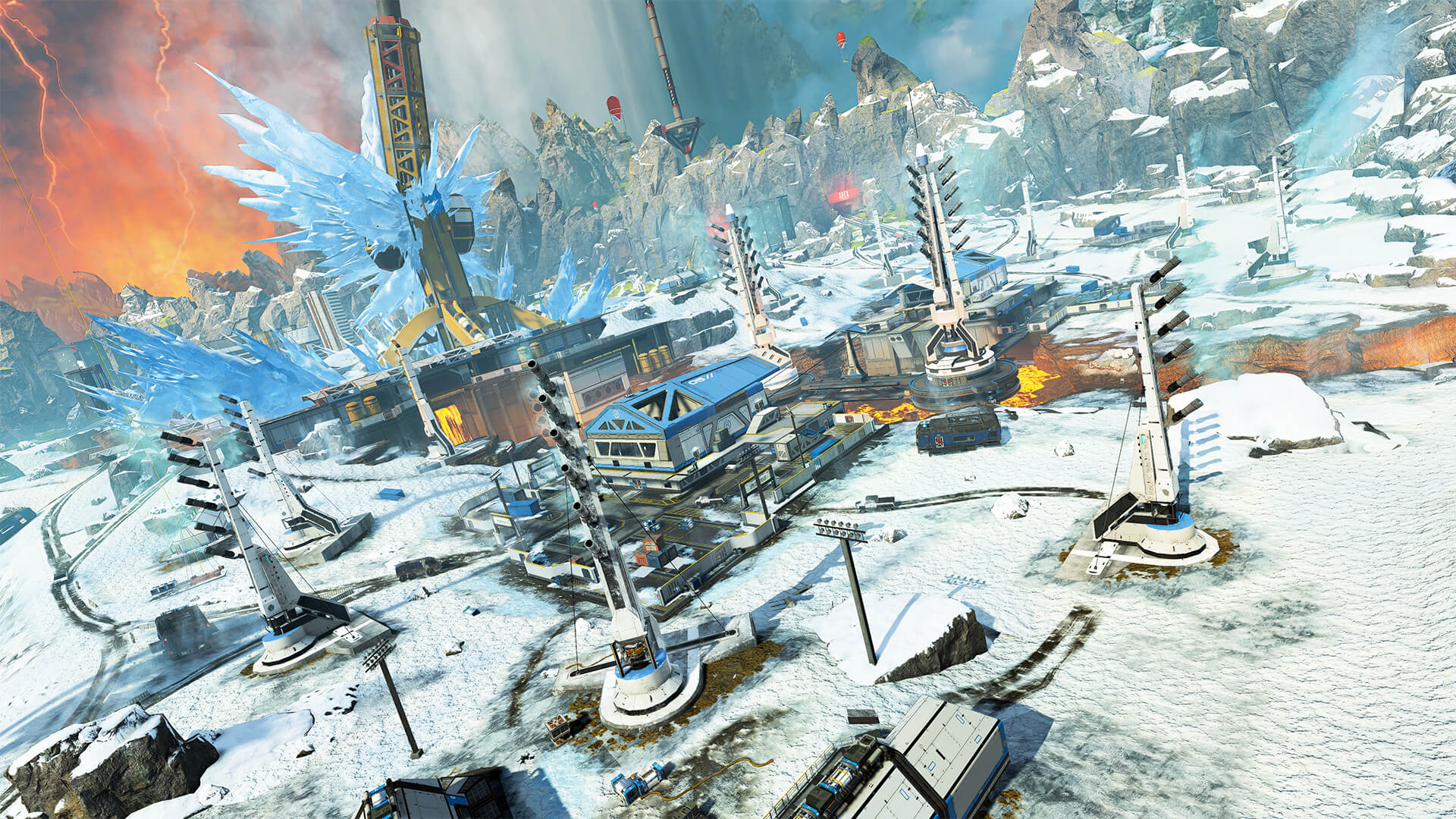 From a design perspective, we wanted to attract more players to the northern region of Worlds Edge with a POI that’s much larger than Refinery was. Accordingly, the Climatizer supports a lot more teams and provides them with much more loot to fight over.

The interiors of the buildings compliments intimate close encounter fights while the exteriors provide longer range layered distanced fights crossing the lava fissure. The layout provides a lot of interesting, layered combat throughout the POI and on top of that, the dynamic element of the fast moving gondolas provides a fun addition to it all.

The planet has fractured all the way from the Climatizer to Fragment East, with a bubbling lava river connecting the two.

The main difference with the crack in the north is that it does not have the updraft air lift mechanic. Instead, it is traversable like all the other lava in the map and inflicts damage to the player if stepped on. 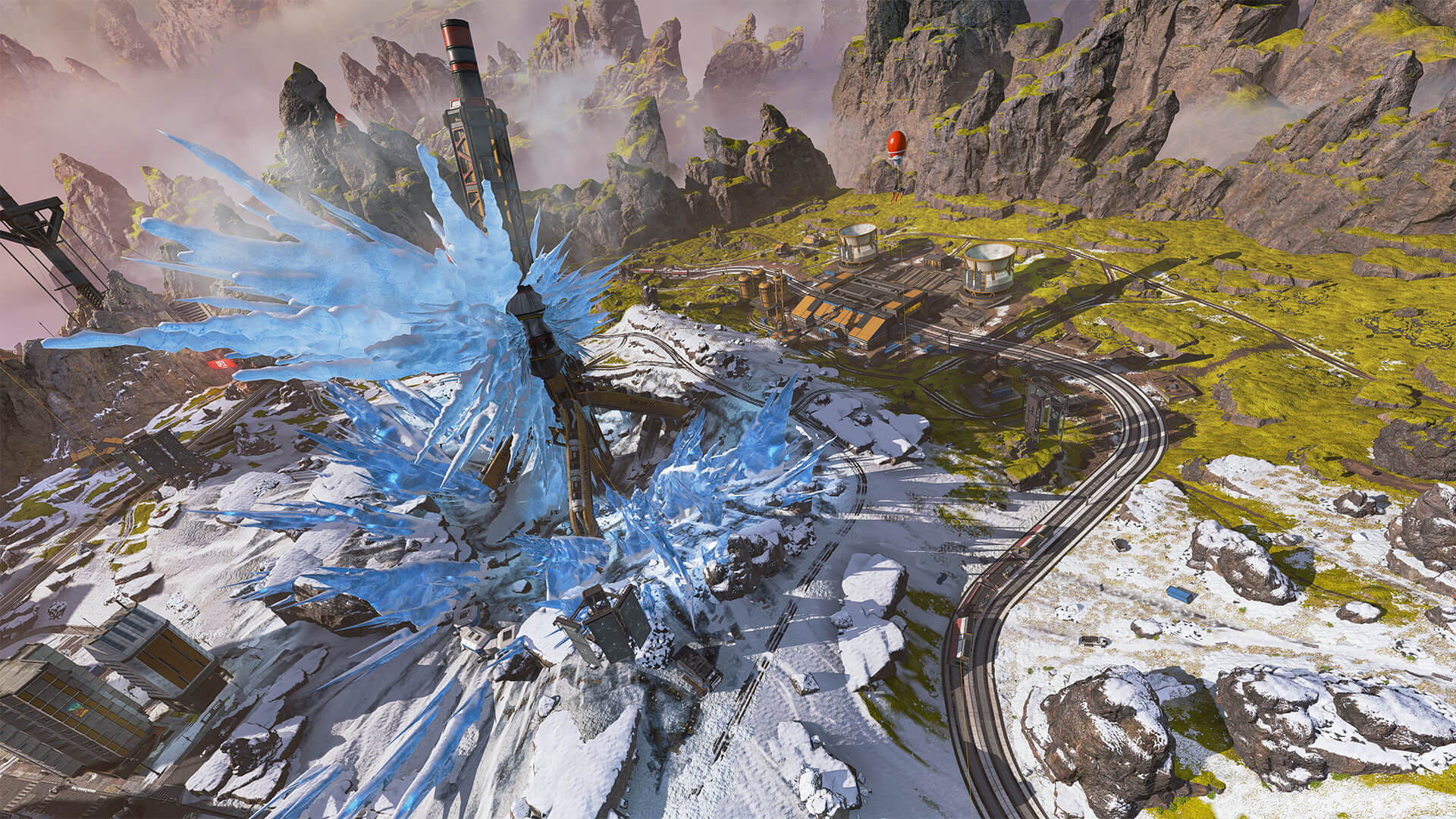 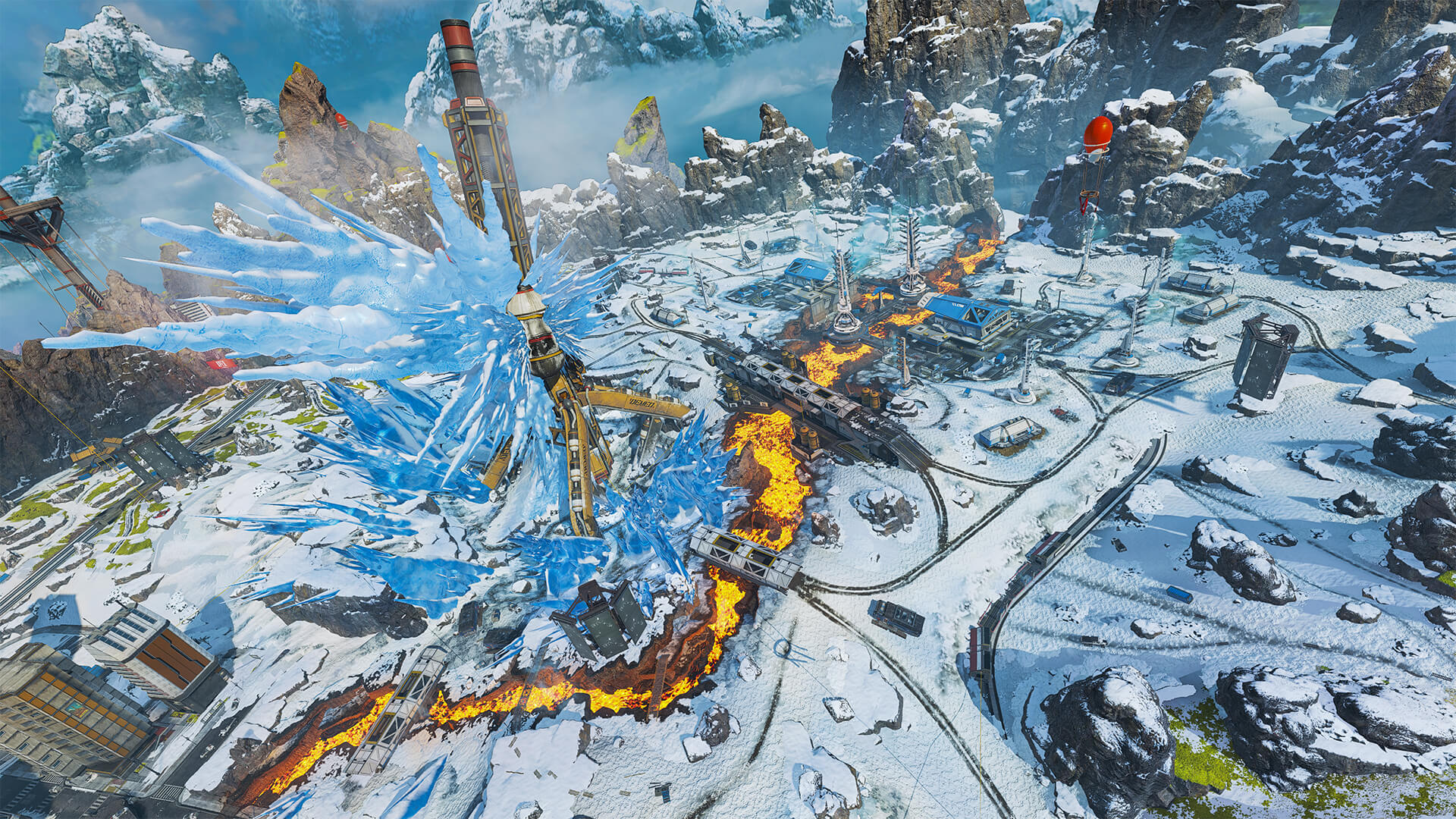 The new crack also will introduce more meaningful decision-making while rotating in the north, as well as create distinct combat chokes.

We’re bringing back some of the dynamic gameplay that trains once offered in World’s Edge, but this time with something new. We’re introducing moving gondolas in two of the new POIs, Climatizer and Lava Siphon. These moving gondola carts will provide a confined safe passageway for you and your squad across the threatening lava and the POIs.

We think the gondolas are extremely fun, and we hope they’ll bring some awesome combat encounters to life. We can’t wait to see what clips the community shares!

Sorting Factory has been swallowed up by a massive sinkhole and replaced with a big POI called Lava Siphon. Hammond has constructed a facility to pump out the lava from the sinkhole and maintain the lava levels throughout World's Edge.

Mainly, we wanted to introduce a fresh new experience here at this POI. The goals were to break away from the traditional free-flowing layout that existed at Sorting Factory, and to introduce opportunities for chaotic, overlapping fights that stand out from other existing combat spaces in World’s Edge. 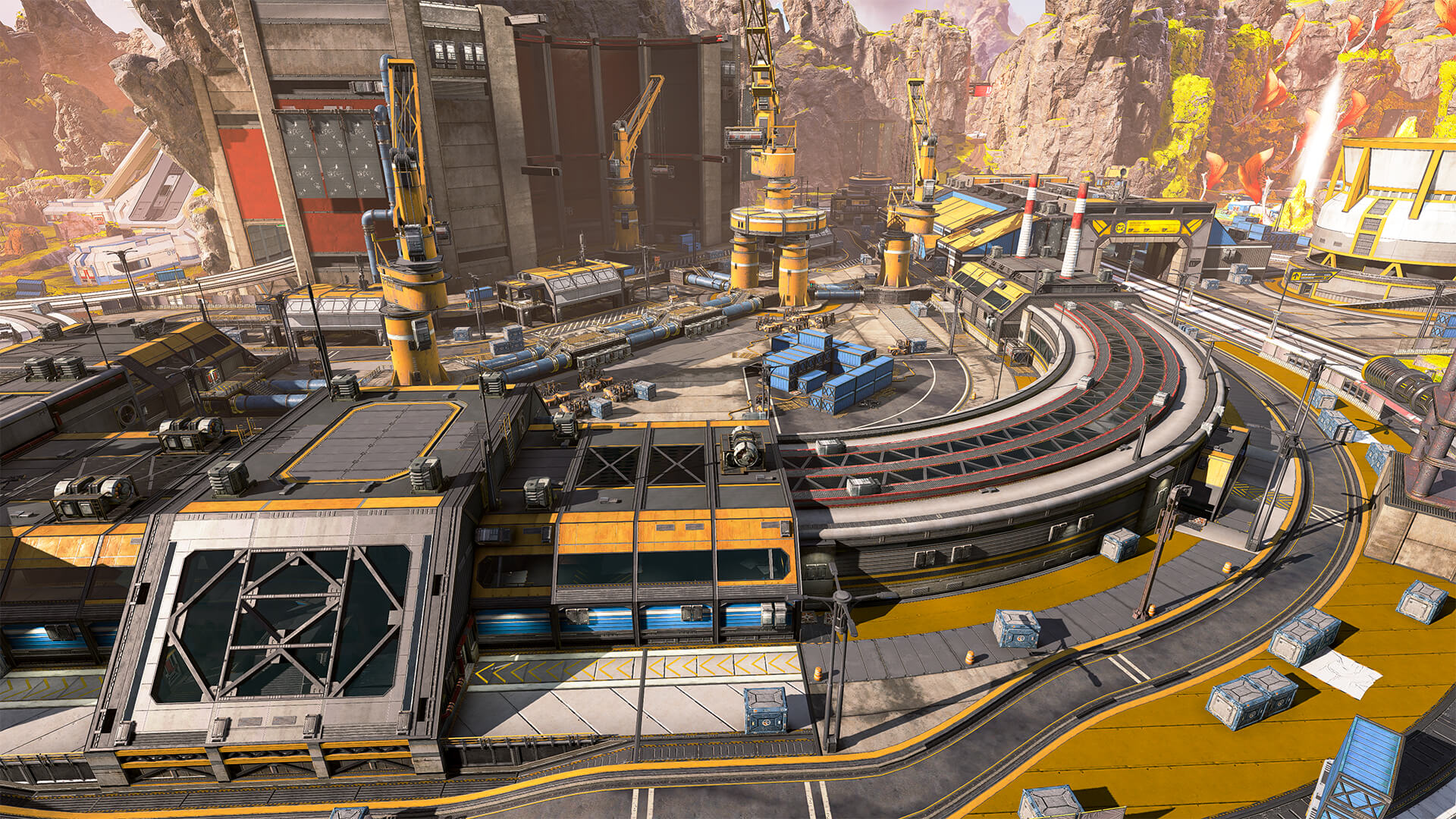 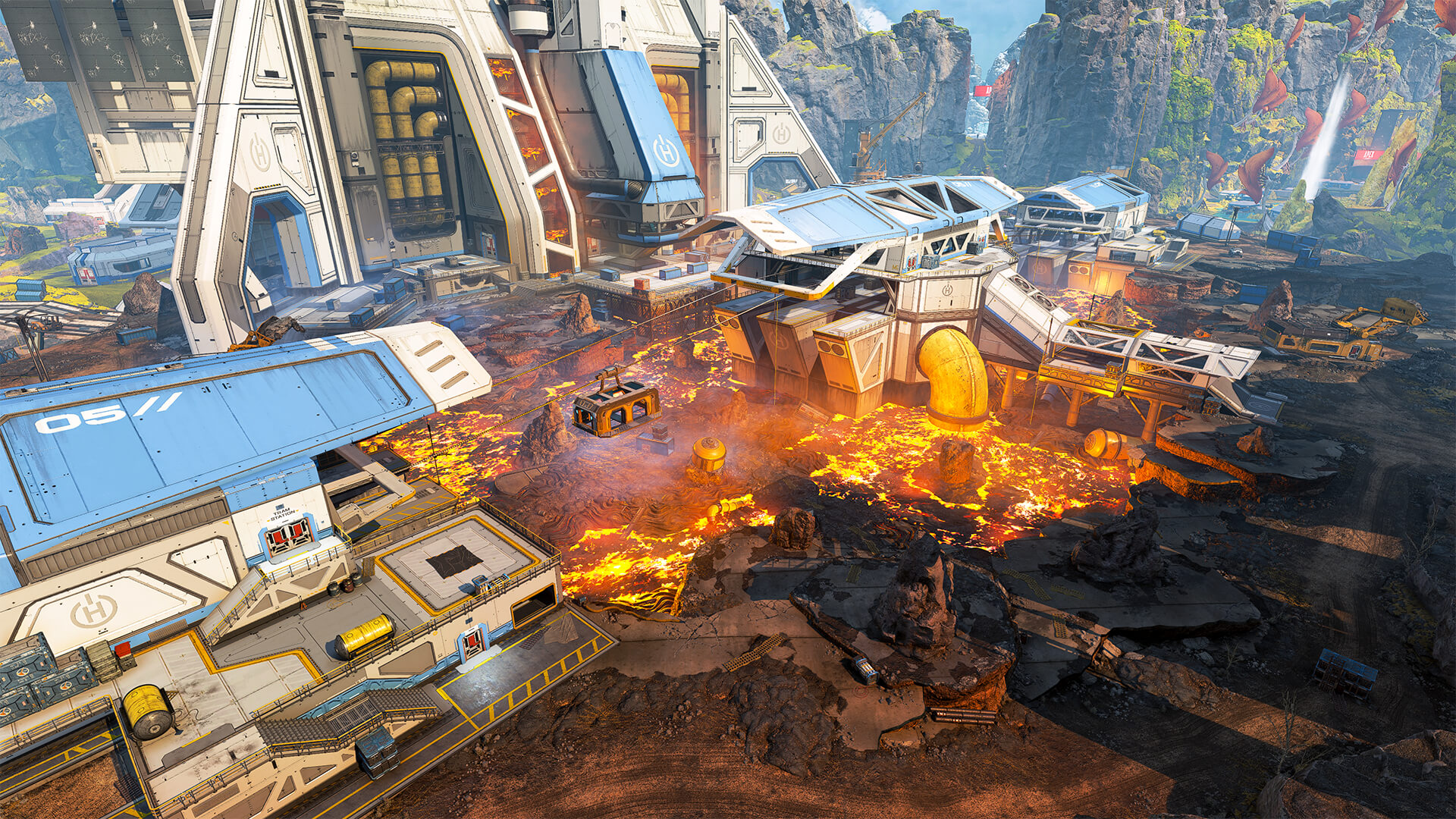 The large lava Siphon building embedded into the mountain offers a lot of interesting close-encounter fights and also introduces a new additional rotation entrance/exit to the existing train track tunnel behind.

Another awesome element of Lava Siphon is the giant sinkhole. It creates more meaningful decision making on landings and rotations throughout the POI. The sinkhole acts just like the northern extended fissure we talked about earlier. It is also traversable and only inflicts damage when traversing directly on the lava.

The aforementioned gondolas are also present in Lava Siphon, but they have a longer travel distance than Climatizer and cross through a central building of the sinkhole. We’ve seen some awesome combat encounters in our internal playtests involving the gondolas in the central station, so we’re really looking forward to seeing all of you in the community get your hands on this one.

The latest seismic activity in the area caused a landslide demolishing the Train Yard.

Fundamentally, our goal here is to prevent the prolonged fights that previously took place around the Train Yard, as well as improving the flow into the tunnel linking to Fragment West. 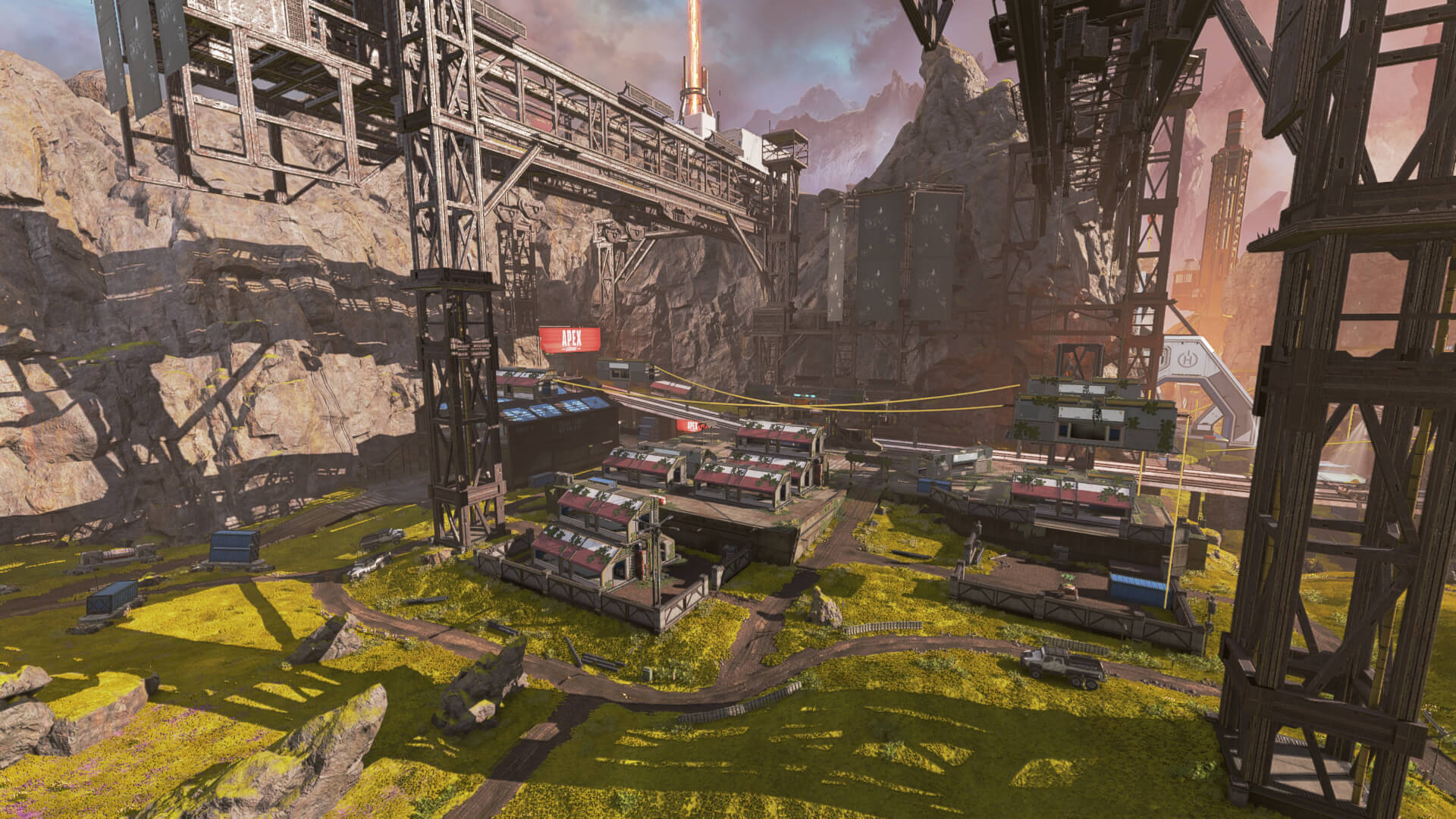 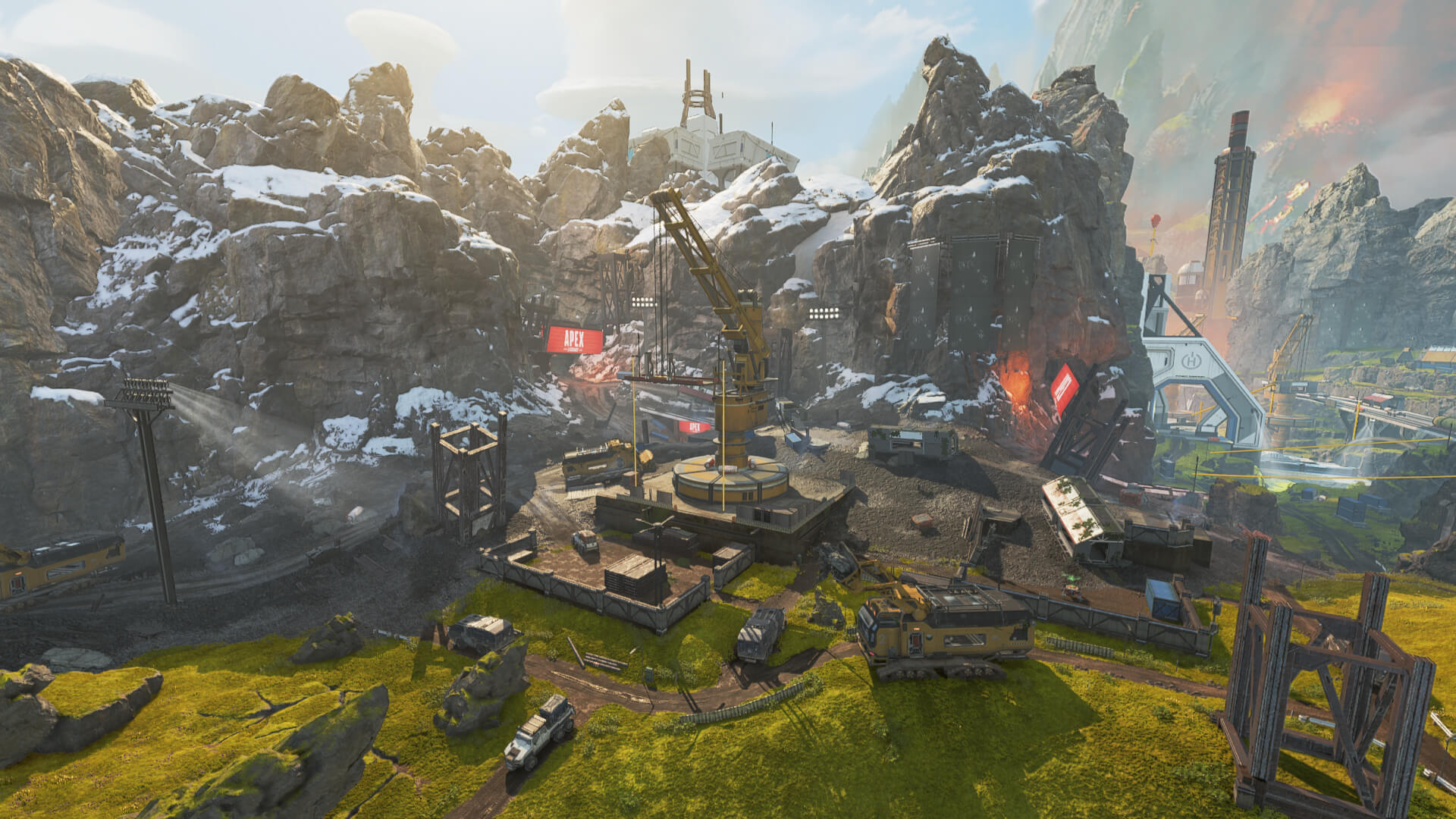 The layout has been simplified to bring more clarity to combat encounters and minimize the number of structures for teams to hold.

Don’t worry, Landslide is still considered a POI on the map and contains almost the same amount of loot as Train Yard did, but it’s a bit more scattered and spread out. (Also, note that the hot zone has been removed from this POI).

With the Emergence update, the skybox in World’s Edge will showcase a brighter, more neutral time of day with a colder look overall. We heard the community’s feedback and we wanted to bring back the older lighting of the map, while putting our own new twist to it. 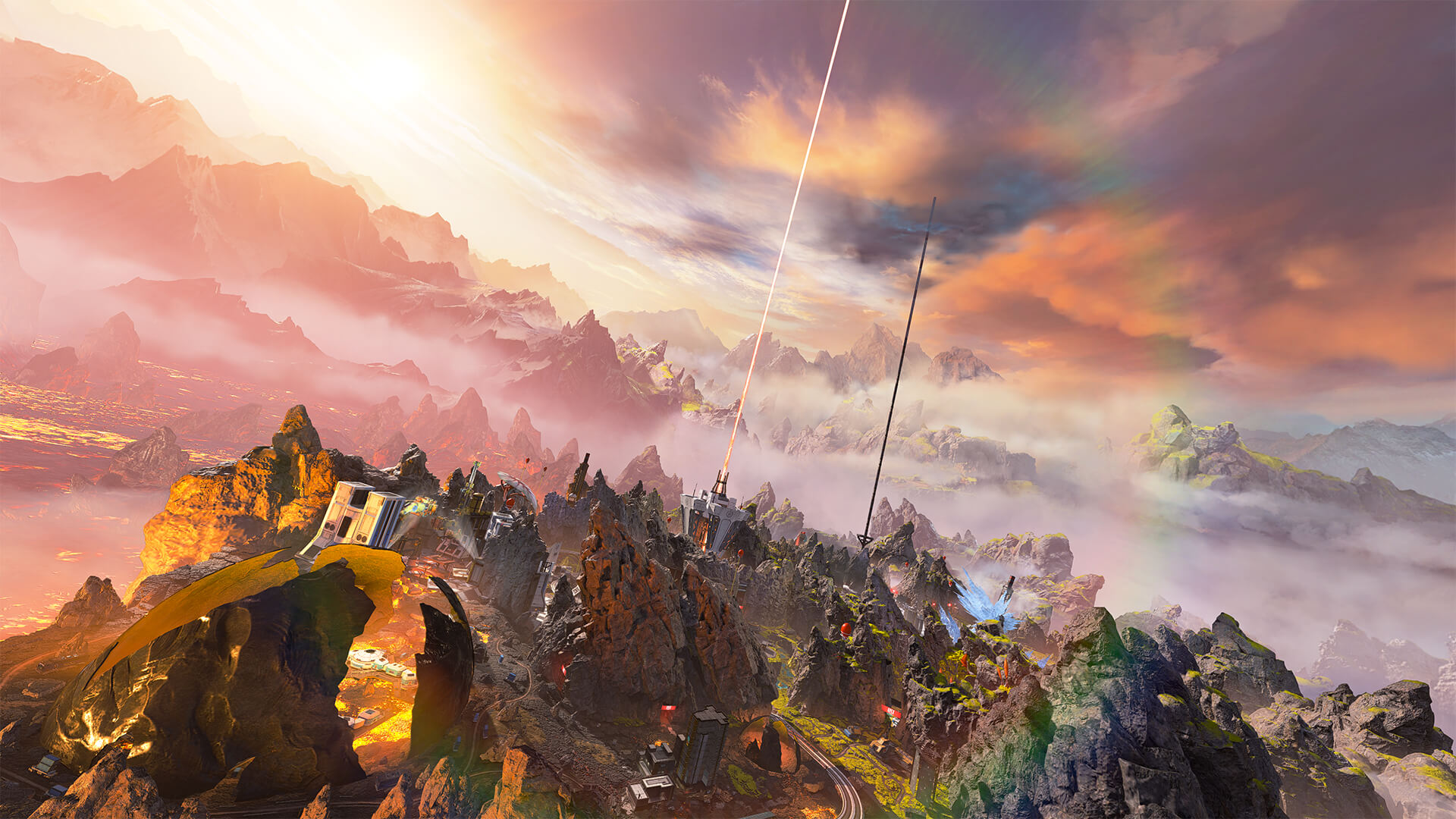 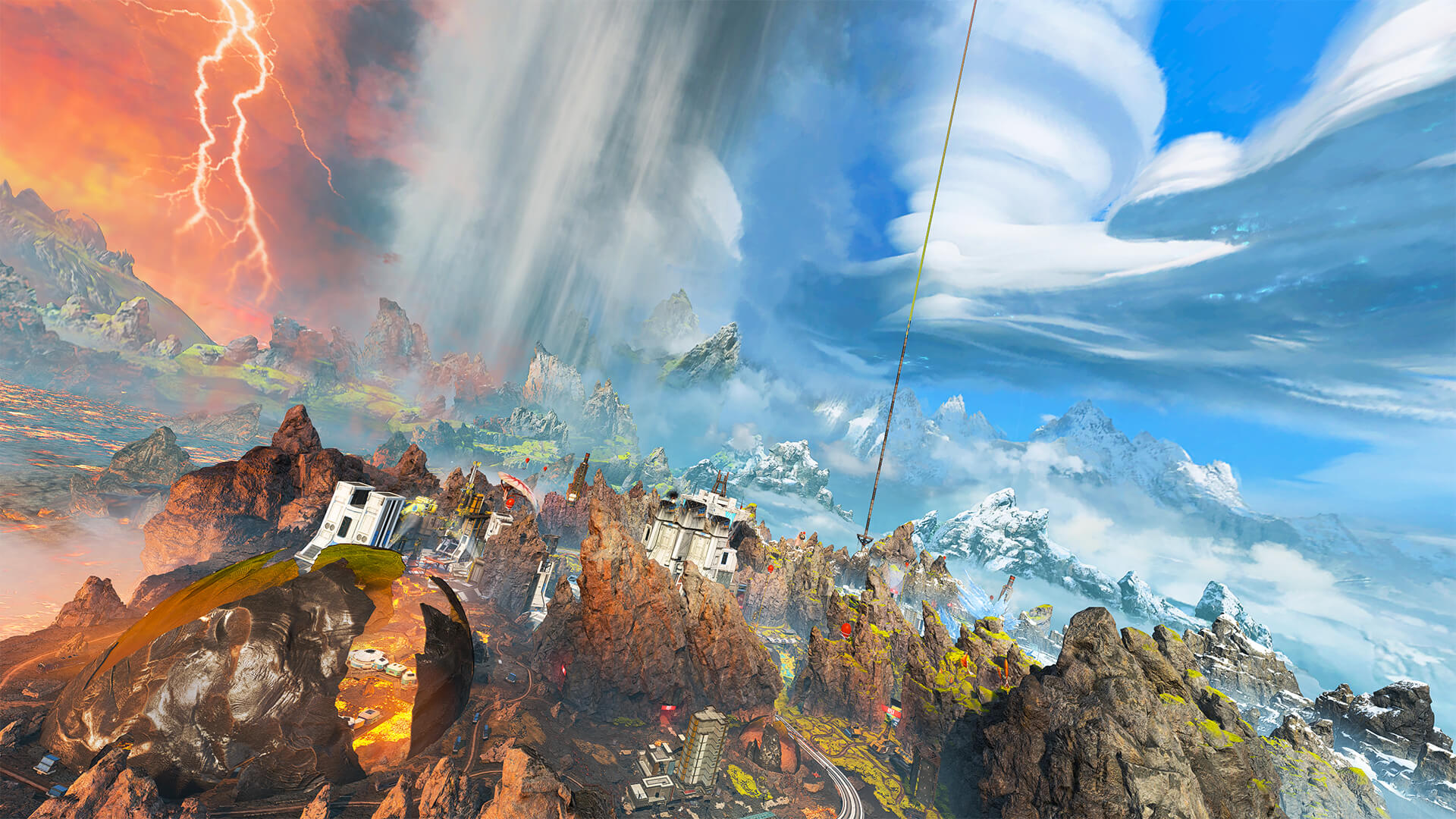 A seasonal change will also be present—there’s now more snow in the northern region. Let us know how you feel about the newer, bluer look!

We also wanted to improve some player flow and provide a couple of new rotation options in the Emergence update.

We’re adding a new rotation at the dead end of Overlook to provide a new option for players to rotate in and out of the POI. This is minor, but we think it will be appreciated by the community. 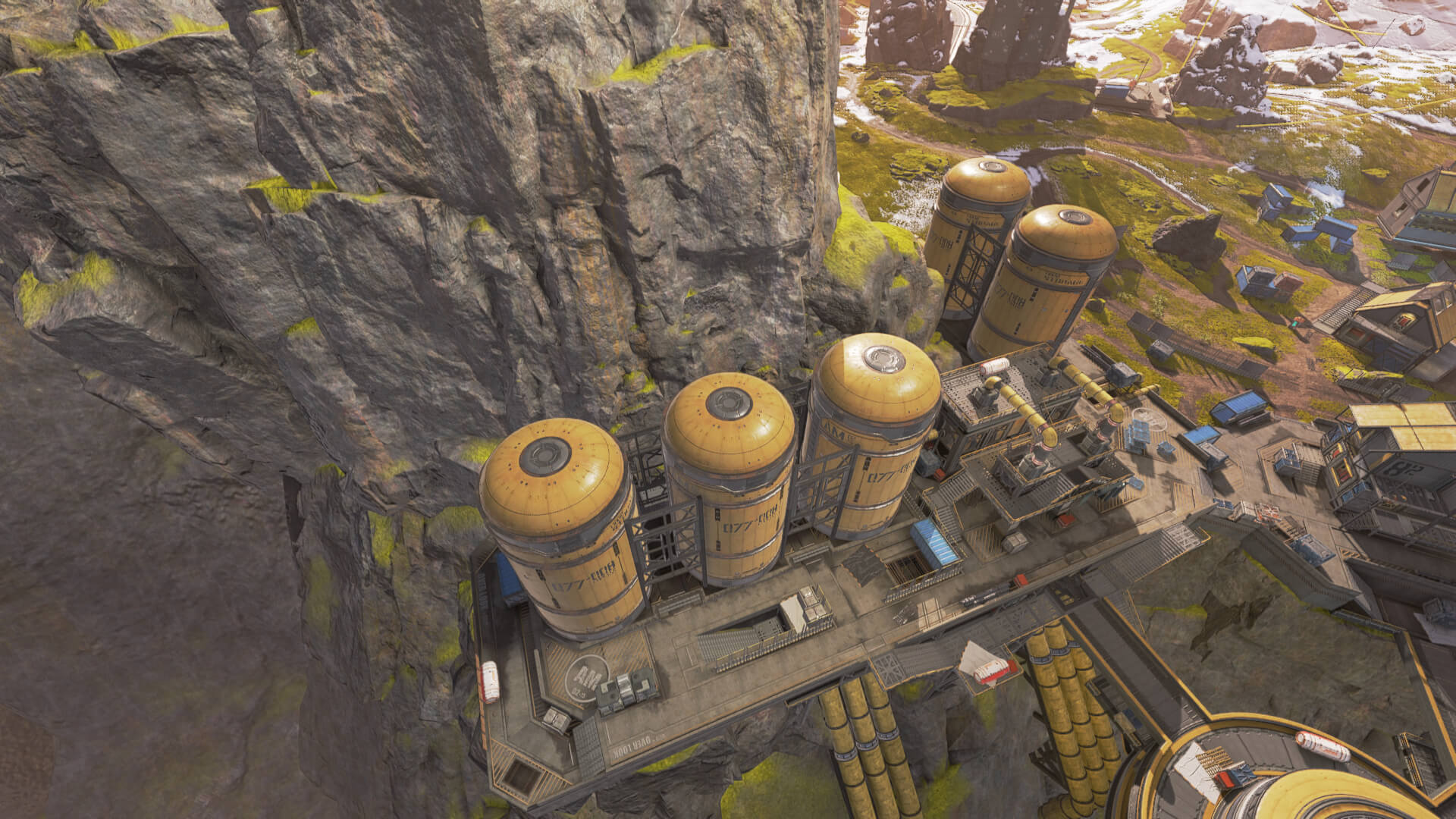 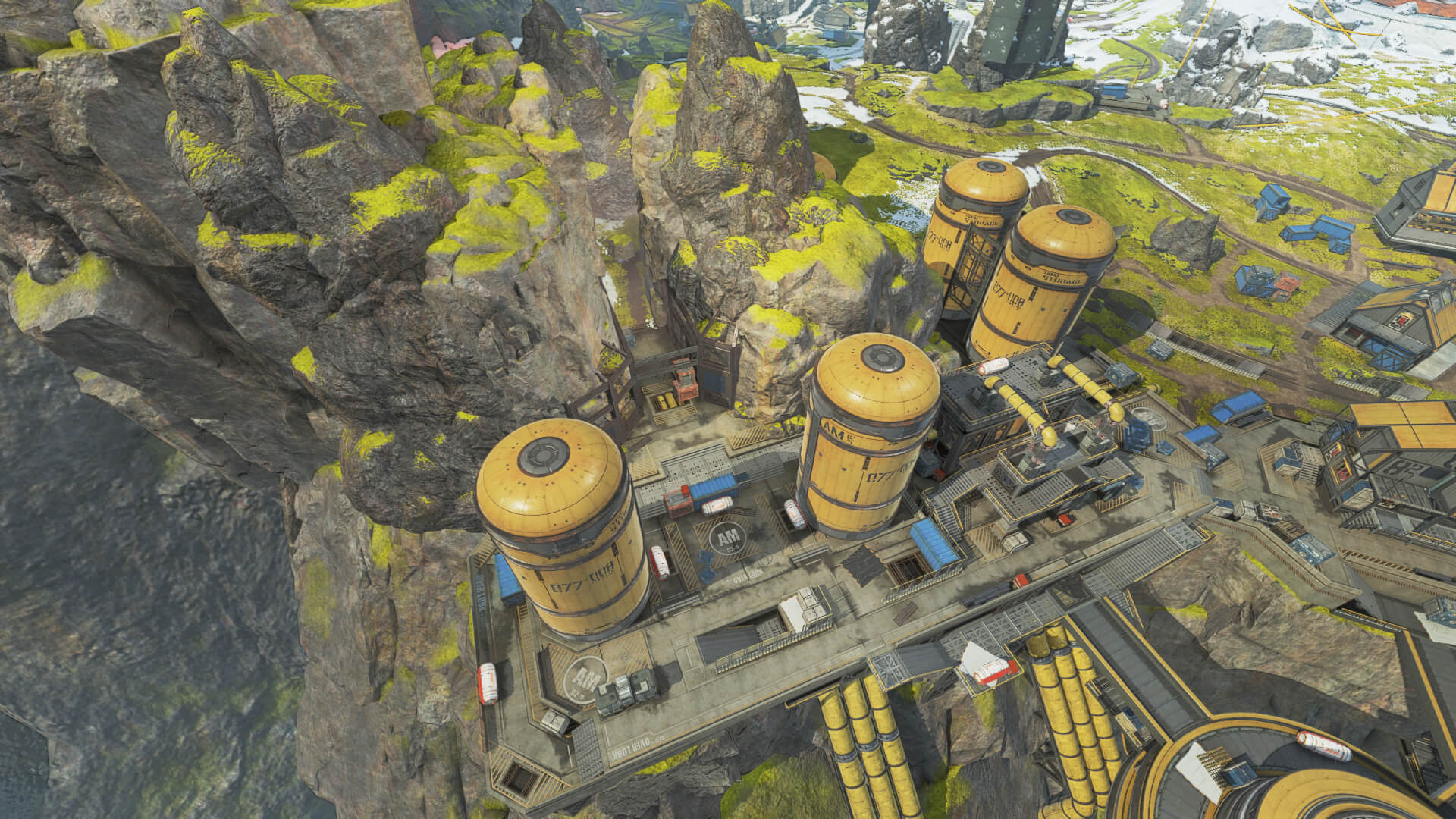 We are also providing a new connecting rotation between Geyser and Overlook. This rotation branches off from the existing central point of the cave tunnel rotation and heads north. This will improve the flow to and from the northern POIs and give another option for teams to rotate through this area.

Designing this map update was a lot of fun, and we cannot wait for you to get your hands on it! As always, thanks for playing, and we look forward to hearing your feedback once this update drops.