No I don't play wraith. You're playing this game on easy mode. Broken hitboxes and super low cooldowns. Even bloodhounds Q is higher and it's the most useless ability in the game. But no it's completely fair pathfinder can grapple to any high spot in the map every 15 seconds that no one else can get to.

Sounds like you've run into some really good pathfinder players and you're mad about it.  It's not really productive posting :S  I played Pathfinder with his broken massive hitbox and I'll play him when they fix the holes in his hitbox.  If they break it worse and make it so his wire-spools on his shoulders take damage, I'll still play him then as well.

@Anlbrd I agree fully, if the devs did what the people in this thread want he would be rendered useless close to as bad a caustic and gibbs bc i also play with him and it just simply a * legend
Message 13 of 35 (483 Views)
Reply
0
Highlighted

@AdmiralTwitchy Why wouldnt it be , thats why each legend has there own ability and depending on how much of a edge in combat you have is determined by the time of the cooldown
Message 14 of 35 (481 Views)
Reply
0
Highlighted

since when fat skin = bigger hitboxes..

i think the main reason behind the broken hitboxes is the animation, pathfinder is a robot, so he dont move like others..

hitboxes are just boxes collision, they are linked to the rig ( bones ), they follow every movement the character move..

yeah ofc the gap between his legs is another reason, but please, let's not say that's it not broken..

hit reg is another thing, it's not related to pathfinder only, so when we consider all the reason, yeah pathfinder might be the hard one to hit

@aka_MAkiNA Fat skin SHOULD = bigger hitbox, and it doesn't. If the model is twice the size, then having the same hitbox means that there's more that people can see that they can't actually hit : which exacerbates the perception of things like "you can't hit his limbs" which is nonsense.

When I say the holes on his legs - I don't mean the gap between his legs. I mean you can shoot right THROUGH each leg, at a point where a bolt sticks out on the default models. As in - you aim at the leg, shoot and the bullet hits the wall/floor behind it. Same with the underside of his hips.

There are parts of his model that you can't hit (wire spools on his shoulders, cannister on his arm for grappling hook) and again : it means when someone aims and shoots at one of those things and their bullets go straight through : they go nuclear about the broken hitbox.

If you stand a caustic facing 90 degrees away from you and try to shoot his backpack - you shoot straight through it. If you shoot his gas can on his arm - you can't hit it. Each character has 'fluff' on their model which the hitbox doesn't allow for at all.

Combine those things on pathfinder with the holes in his legs and hips - there's just TOO MUCH you can see but can't hit.

What I'm frightened of is that they'll not have the resource to fix the models, so they'll either make a pixelperfect hitbox for the larger models, and apply it across the board or they'll revert to the old hitbox which was worse than broken. 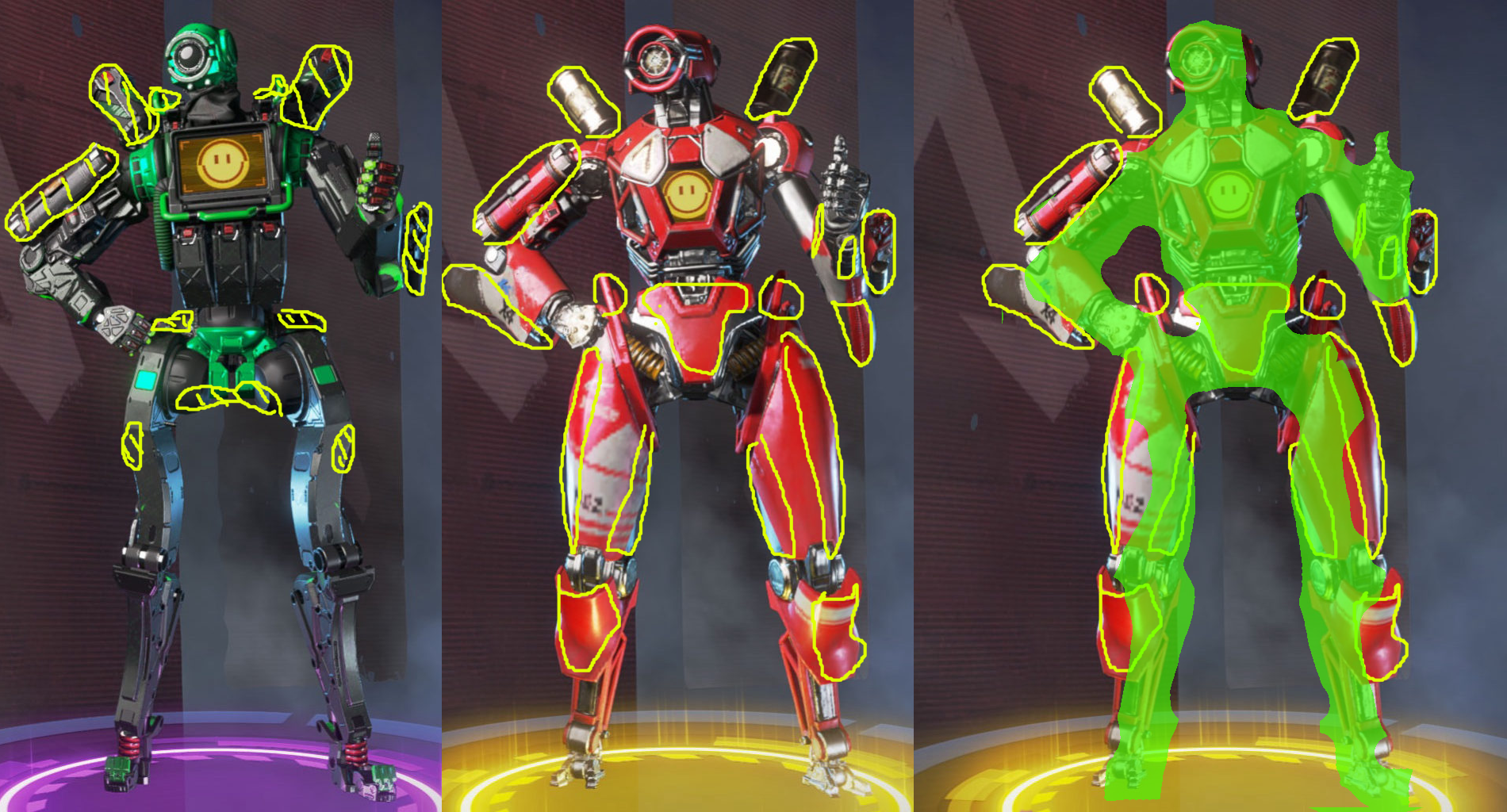 So here's pathfinders hitbox as far as I can test with guns in game.  I've hashed out the parts that you can't hit - the underside of the hips is difficult to explain but if you use my graphic as a guide to do your own testing you'll find the spots in game where you can't hit.

The biggest problem is that the two separate models are MASSIVELY different and use the same hitbox for the smaller model.  The holes in his thighs and hips are the part of the hitbox that is broken - the other problems all come from the models themselves, rather than a faulty hitbox.

On the thicc models, you can't hit the shielding on the front of his navel or his backside, you can shoot straight through the top of his back where a human's shoulderblades would be.

Basically those fat skins are an effort from the art team which should have been aborted at QA.

If you've got friends who play pathfinder and use the fat skins - explain this to them and see if they keep using those skins.  If they do, you know who is going for the 'easymode' that someone here was whinging about earlier.

It's important to note that you can also shoot through caustic and gibraltars backs without getting hits.  You can shoot through the jetpack at the hips on every character Ive tested without getting hits.  There is garbage on all the characters which you can't hit.  This isn't unique to pathfinder.  The thing that is different with pathfinder is the ridiculous skins that make a problem way worse than it is with anyone else.

They won't do nothing , because they don't know what the hell to do. They are lost. They have freeking 9 "legends" and can't balance that sh*t. They create "meta" with only 9 "legends". When they will have more then 20 if this game survives to have 20 "legends", they will be in deep *. But hey you can buy crappy skins with a lot of money. And you can farm points in game that you can't use. THIS IS A GREAT GAME.

@PNab_Ssol Tbh - speaking only from console : this IS a great game. There's nothing else that plays this well available in oce. Everything else that might play well is already dead.
Message 20 of 35 (411 Views)
Reply
1
New topic
Twitter Stream