SBMM is a good idea in theory and usually when how it is figured out is through some hidden formula, the company making it is usually screwing up badly.

Downloaded Season 4 just to take a look and see if the game got better.  In season 1 there was no SBMM when I played, and I didn't mind at all.  What I minded was that the weapons were so awfully imbalanced and also mostly super bullet spongy. Your character could take so many shots to their body it made them more like cartoons than people.

You can let people have fun and not have them take so many shots to the body or head without dying that it becomes stupid.

So, I'm hoping the game got better with that.  It was always a fun idea, also even though there was just one game mode to play.

Edit:  played season 4.  tbh it doesn't seem so bad, although I prefer no SBMM and I'm sure it's screwed up somewhere along the line.  But as fun as it was, you often had a hard time getting ranked top 5 because there were usually teams out there who'd wingman your head off and you couldn't do anything about it.

I don't really care either way.  The game is a fun outlet, that's what it's meant to be.  Srs faced comp is not something that really happens over the internet...and I'm looking at you, MOBAs...

The game implemented SBMM in ranked so why does public games have to be harder then ranked? Got a problem? Play ranked instead.

Excuse my ignorance, but why grind ranks when you get matched with "similar" opponents (even in bronze/silver because of smurfs) anyway? Just to show off?

I think that ultimately if nobody had even mentioned SBMM in the first place, then nobody else would have even noticed it was in the game, and wouldn't complain.If you like the game, play it. If not, don't. Simple. I think Apex is a great game and the devs are doing things right.

I'm glad it's not affecting you as bad, but i love apex and i'm sad that i cant play the game casually anymore and i'd definitely notice even withouth them confirming it.

Serious question, are you not being put into lobbies with only dia and preds?

Well anyhow, i might be delusional thinking that there cant be more of them than people of my skill level.

I have no idea if this even affects me since I've never touched Ranked once, and only play casual with random squads since I don't know anyone who plays this game. I will say that, since Season 4's start, I've felt pretty good about this game (minus the server issues...). Heck, if anything, I'm actually improving this season (maybe just from practice, maybe from SBMM, idk). My K/D ratio is much better, my average damage has gone up considerably, I'm getting better finishes more often, and have already racked up quite a few wins and trending towards an all time season high for them. On the flip side, I still get that one team that feels like all they do is run around dying or going off to do whatever by themselves, or in some cases, they do all the work, and I'm getting my butt carried by them. XD It's still random who you get once the match queue's up. Sure, they could be the same skill level as you according to the game, but there's dozens of other factors that could be screwing up your game (one not even related to SBMM in the forms of server/technical issues). I'll admit I've yelled about the people I'm matched up with before, but it's been much worse in other games I've played (Overwatch for example would screw me over multiple times since I would rank platinum when I play competitive, but the actual platinum players were just stomping me into the turf. I still have no idea how match making works in that game, and if it's SBMM, that one is terrible...). Overall, I feel like, at least in my area, this is one thing that's going in the right direction. Now if they would put more effort into the actual performance of the game to truly balance things out, that would be amazing.

I think SBMM should definitely stay in the game but they need to fix it for mid tiers to the tippy top tiers players, they dont belong in the same lobbies. And idk maybe do something so you can play with your friends that are bad at the game? Cause right now you cant and this shouldnt happen in a team based game 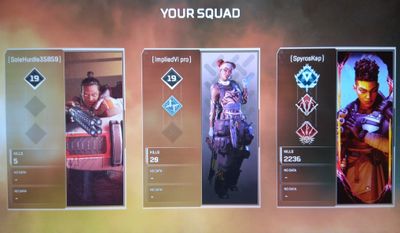 Why? what can we see on this picture?

Oh you think the number of kills determins if a player is good or bad?

Do you still think the longer you play the better you wil get?

At some  point you reach your skill limit, given by reaction, coordination and maybe the functionality of your eyes...

I wanna see you get 40 years old and try to compete with 14 year old russian meth kiddoz!

Nope, my times to reach platinum are over for sure...

But hey! SBMM allows me to play with players on my level.