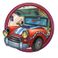 I still stand by this game 100% with that said the quality has gone down to CoD levels from initial release.

I've never had an issue during the initial release but man ever since the patch I've been experiencing all sorts of problems head shots not counting for extra damage literally hit a player with fully charged triple take and only got 69 dmg in practice mode its 100+! Auto shotguns also don't work like in practice since hitting the body is yielding 7 -25dmg up close while head shots are at the 50dmg mark for me.

Alot isn't adding up and during a enemy crouched in a corner I took aim only for my shot to go through them only registering after 3 to 4 shots it's not my internet I'm at 400gb down and 50 up something has to improve especially since code leaf is everywhere!

The "known issues from patch 1.2" thread was updated today. So you may be interested to have a read of that over on Reddit or the AHQ Discussion.