Nothing forces you to read this subject, I created it as the subject on young resistans (an we have nothing about resistance in BFV) people and probably like next others for an instructive purpose. Your comment launches a useless debate that is not related to the subject and if you do not want to learn anything it is up to you.

An other form of fight in WWII

The Women's Land Army (WLA) was a British civilian organisation created during World War II so women could work in agriculture, reviving a disbanded World War One organisation and replacing men called up to the military. Women who worked for the WLA were commonly known as Land Girls. In effect the Land Army operated to place women with farms that needed workers, the farmers being their employers. They picked crops and did all the jobs that the men would do. Notable members include Joan Quennell, later a Member of Parliament.

As the prospect of war became increasingly likely, the government wanted to increase the amount of food grown within Britain. In order to grow more food, more help was needed on the farms and so the government started the Women's Land Army in June 1939. Though under the Ministry of Agriculture and Fisheries, it was given an honorary head – Lady Denman. At first it asked for volunteers. This was supplemented by conscription, so that by 1944 it had over 80,000 members. The WLA lasted until its official disbandment on 21 October 1949. 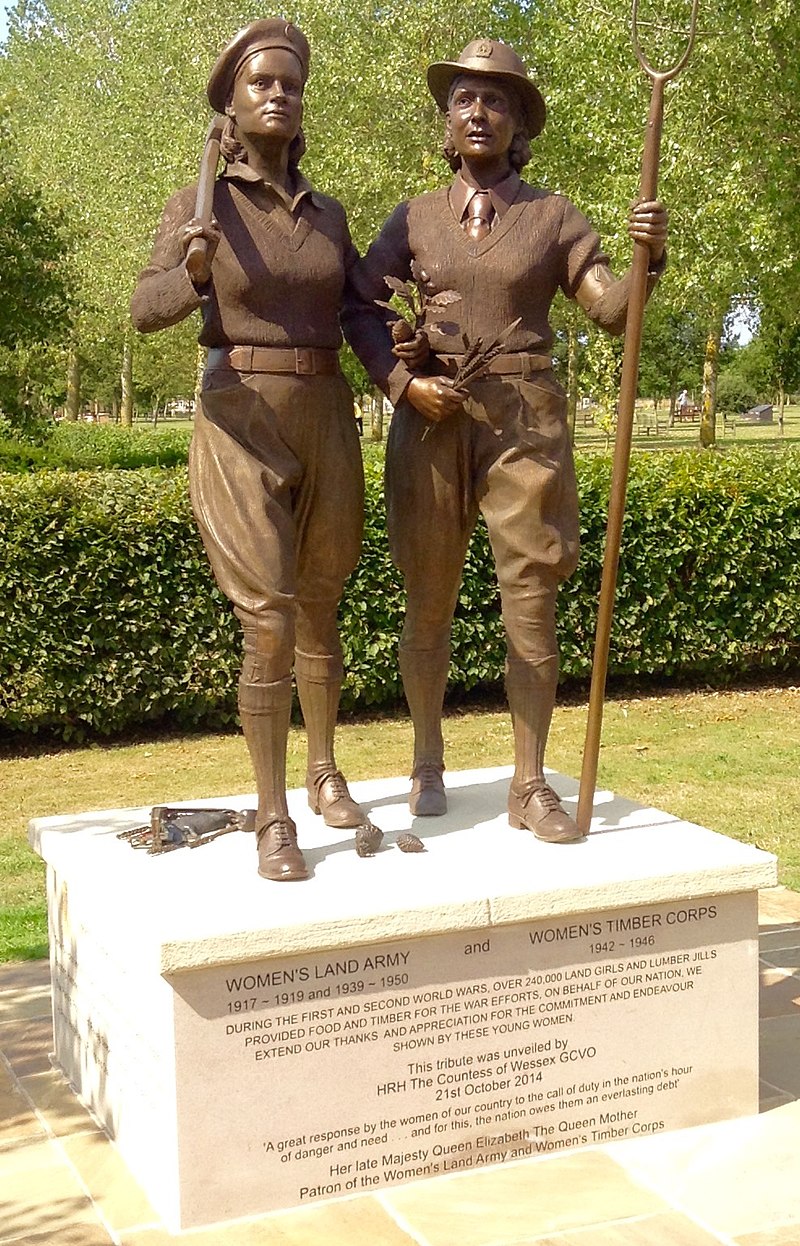 The majority of the Land Girls already lived in the countryside but more than a third came from London and the industrial cities of the north of England. A separate branch was set up in 1942 for forestry industry work, officially known as the Women's Timber Corps and with its members colloquially known as "Lumber Jills" - this was disbanded in 1946.

In December 2007, following campaigning by former Land Girl Hilda Gibson, the Department for Environment, Food and Rural Affairs (DEFRA) announced that the efforts of the Women's Land Army and the Women's Timber Corps would be formally recognised with the presentation of a specially designed commemorative badge to the surviving members. The badge of honour was awarded in July 2008 to over 45,000 former Land Girls.

In October 2012, the Prince of Wales unveiled the first memorial to the WLA of both World Wars, on the Fochabers estate in Moray, Scotland. The sculpture was designed by Peter Naylor. In October 2014, a memorial statue to the Women's Timber Corps and both incarnations of the Women's Land Army was unveiled at the National Memorial Arboretum in Staffordshire, England.

@Moskolonel I dont need read your post subjected to learn anything about any war becouse i have in my house a doctor on anthropology. My mother. and I am absolutely sure that if she read this post of yours, she would find it totally male chauvinist , even though she knows what it is about: girls on ww2.
Message 33 of 45 (305 Views)
Reply
0
Highlighted

@Moskolonel I know history much more than u kid. Lol hahahahahaha it doesn’t change the fact that your post was sexist
Message 34 of 45 (304 Views)
Reply
0
Highlighted

no one needs your post to know history for that there are schools, colleges and mothers with doctorate degree lol. Kid, accept um right about u lol
Message 35 of 45 (299 Views)
Reply
0
Highlighted

nothing you say and post will change the fact that the dice put women in the game to attract the gamers girls. anything. nor even you put an entire history book here about ww2 hahahahahaha lol
Message 36 of 45 (296 Views)
Reply
0
Highlighted

I was not forced to read anything. I just can't read nonsense and keep silent
Message 37 of 45 (295 Views)
Reply
0
Highlighted

Hey all, when posting on AHQ we would ask that you keep it polite and constructive.

No everyone has to agree with each other but please ensure that your posts are also kind, constructive, and never attack another user or belittle their opinion.

If unsure as to what is acceptable on AHQ then you can find the AHQ User Rules and Guidelines here: https://answers.ea.com/t5/help/faqpage 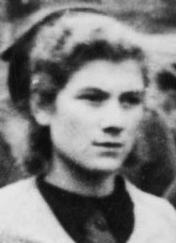 Masha Bruskina lived in Minsk with her mother, senior goods manager of the Book Trade Office of the BSSR State Publishing House. She studied well and read a lot. She was also a pioneer leader and a member of the school committee of Komsomol. in December 1938, the newspaper Pioneer of Belarus published a photograph of Masha with the caption: "Masha Bruskina - the schoolgirl of 8th grade in school № 28, Minsk. She has only good and excellent marks in all subjects". In June 1941, Maria Bruskina graduated from Minsk secondary school № 28.

She volunteered as a nurse at the hospital in the Minsk Polytechnic Institute, which had been set up to care for wounded members of the Red Army. In addition to caring for the soldiers, she helped them escape by smuggling civilian clothing and false identity papers into the hospital. A patient told the Germans what Bruskina was doing, and she was arrested on October 14, 1941, by members of the Wehrmacht's 707th Infantry Division and the 2nd Schutzmannschaft Battalion, Lithuanian auxiliary troops under the command of Major Antanas Impulevičius.

After being arrested, Bruskina wrote a letter to her mother on October 20, 1941:

I am tormented by the thought that I have caused you great worry. Don't worry. Nothing bad has happened to me. I swear to you that you will have no further unpleasantness because of me. If you can, please send me my dress, my green blouse, and white socks. I want to be dressed decently when I leave here.

Local German authorities decided on a public hanging to make an example of Bruskina, along with two other members of the resistance, 16-year-old Volodia Shcherbatsevich and World War I veteran Kiril Trus. Before being hanged, she was paraded through the streets with a placard around her neck which read, in both German and Russian: "We are partisans and have shot at German troops". Members of the resistance were made to wear similar signs whether or not they had actually shot at German troops. She and her two comrades were hanged in public on Sunday, October 26, 1941, in front of Minsk Kristall, a yeast brewery and distillery plant on Nizhne-Lyahovskaya Street (15 Oktyabrskaya Street today). The Germans let the bodies hang for three days before allowing them to be cut down and buried.

When they put her on the stool, the girl turned her face toward the fence. The executioners wanted her to stand with her face to the crowd, but she turned away and that was that. No matter how much they pushed her and tried to turn her, she remained standing with her back to the crowd. Only then did they kick away the stool from under her.

The daughter of a miner and a schoolteacher, Vera Voloshina was born in the Siberian city of Kemerovo on 30 September 1919. After doing well in sports at school there, she moved to Moscow after the tenth grade. From 1936, she studied at the State Institute of Physical Education. While in Moscow, she attended the Aero Club where she practised parachute jumping and piloted a Polikarpov I-153 fighter plane. She attempted unsuccessfully to go to Spain to fight in the Spanish Civil War.

According to several accounts, the Soviet sculptor Ivan Shadr persuaded Voloshina to pose as a model for his 12-meter nude statue of the Girl with an Oar which was unveiled in Gorky Park in 1935.

Voloshina began to train at a sports institute but had to leave after experiencing serious health problems. Instead, she joined the Institute of Cooperation, completing her third year in 1941 before the outbreak of World War II. In the summer of 1941, she helped to dig trenches and anti-tank ditches around Moscow.

On joining the Red Army, she was assigned to Unit 9903 of the intelligence division, operating behind the German lines. After participating in several successful raids, on 21 November 1941 she was involved in sabotage work on the front when she was seriously injured near Naro-Fominsk and taken by the enemy. On 29 November, she was hanged by the Germans at Golovkovo Farm. Local residents later reported that she had acted defiantly before her hanging, singing The Internationale and shouting "Farewell, comrades" before she died. Her body was retrieved by the Soviets a week later, after the Germans had retreated. She was finally buried in a mass grave in Kryukovo.