My Spore name is EEEEEinsertstuff. Just search up 'Blindchompy' and you'll find my stuff. I've made quite a few, and I even have a Sporecast full of 'em! 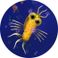 I'm BugWoman Z. I just recently started playing again after a long time, though I hadn't gotten that far previously before my computer died, taking my game with it. Therefore I'm pretty much a Newbie having only recently ventured into (and completing) the Tribal stage and having just dipped a toe into the Civilization stage (I'm still a bit tentative there).

My favorite stage is the Creature stage and I mostly create creatures for that. Apparently they are evolved enough though, because I get notifications that some are ending up even in the Space stage, so that's cool. I won't claim that they are ultra sophisticated though, as I mostly just use the creator as is - no special add ons or anything.

I have about 25 creatures and one vehicle so far, but I create new creatures on a regular basis. My creatures have some similarities, but they are still fairly diverse. If you read my tagline though, you'll see that they can be a little weird, and sometimes insect inspired, well, because BugWoman (and Entomologist) after all.

I just added you as a buddy, Taru-Elaari!

And a bunch of you other guys, too! 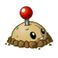 Feel Free To Add Me! Secretfireball

Would also love to add people and see what's been created as of late. Like a lot of others, I'm a bit on and off, but I really enjoy making things for the creature stage and the space stage. I also sometimes make buildings and/or vehicles, but creatures is mainly what I focus on.

And yours are very creative. I especially enjoyed the creatures that are object inspired - like the "house" and the "table." And the "chair" was really inventive.

Hello! I've been playing this game on & off since around when it released. I don't play too often anymore, but if you'd like to see my creations, you can find my account here

This is a new screen name, but I mostly like to make stupid looking creatures lol, and I post my single player creatures, too