@DanielRicciardo I'm not convinced EA will learn anything, look what they did to BioWare.
Message 261 of 704 (194 Views)
Reply
2 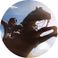 @Zoikon I hope so. He seems to be passionate about the franchise based on the tweets he’s made. 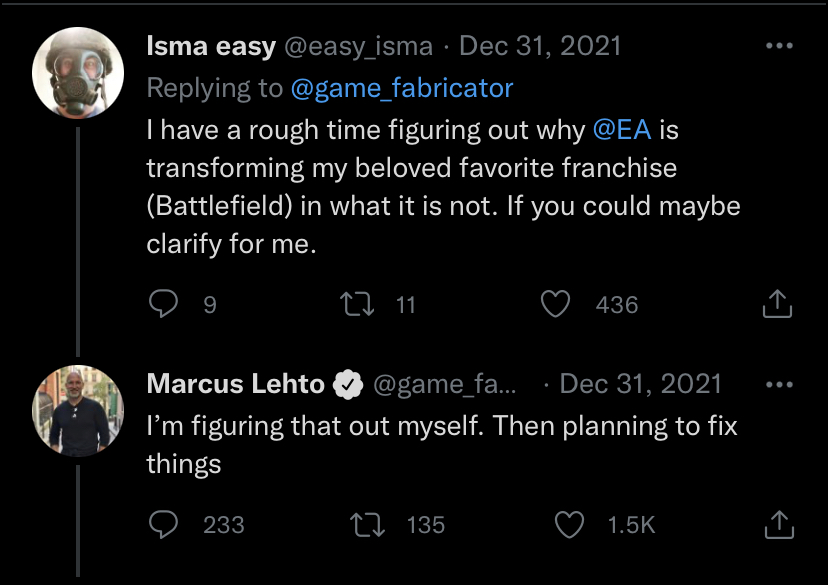 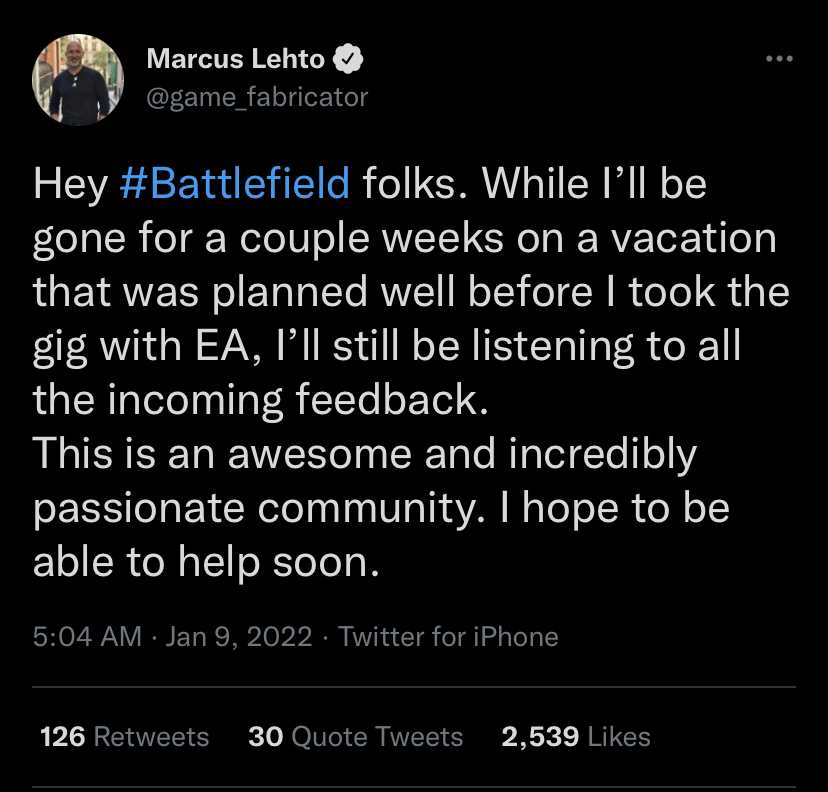 @DanielRicciardo He is the only reason i didn't abandon this game yet, This dev team needs to get itsself in check if it wants to deliver a "True love letter"
Message 263 of 704 (149 Views)
Reply
3

@X-Sunslayer-X
I do not ignore anything i chalenge the embeded beleifs that classes somehow " promote " teamplay to any extend when it does not . Also all past BF have the system classes wrong and even games who does it right still pose a chalenge when playing with randoms players let me give exemple ..

Insurgency either the mod the game or Sandstorm the sequel have what we can call " classes " with certain custumization options in each . Wich prevent to have to much snipers or to much x and y . But when playing Insurgency if you get bad players at playing either snipers or whatever classes the system become very frustrating as they are not doing their " jobs " properly while you or your friend could have . Thats said at least you didnt end up with 30 recon crouching in bushes like BFBC2 use to have in Linear Rush maps ..

BF classes system as always been flaw and never brought anything positive to the game in itself .. Games like MAG are great exemple .. You did not had fixed classes but you had a Skillstree type of thing where players could set up passive ability with skills points that could lean toward X and Y pplaystyle .. Players choose what they were the most capable at and ran with it .. the least kill heavy players were choosing more like Engineer type of bonus and so on while Assault guys with High KD choose combat specifics stuff like reload speed increase etc..etc...

Yet In MAG you needed Engineers , Medics , Demolitions to destroy bunkers turrets , and so on and there was no issues having every type of players you need to repair , destroy , push , revive etc.. And the team work was off the charts compare to Any BF i played with randoms .. Because MAG had a great VOIP proximity also great command structure with squad leaders , platoon leaders and OIC who communicated , broadcast and organised ..

The problem with all BF as always been the same since playing with randoms .. DICE since bad company 1 has shifted to a squad focus design around 4 squad mates It was okish in BAd company since it was a 12 vs 12 game where 4 man was 1/3 of the team .. But this design show its flaws when it get to 64 players and now 128 makes it even worst ..

We need Bigger lobbys , Clan supports , VOIP , Command structure , Proximity VOIP with allies at least and even ennemy if possible .

This is where the game is lacking ...

As for your exemple of " selfish players " What was the difference between the Angel you descriibed and the " Assault class " from Bad company 1 ? He had a grenade launcher on all weapons capable of destroying walls and opening stuff and damage vehicles and kill players , He had a Medpen capable of healing himself and so on .. But sometime what you call " selfish players " as long as they play along the objective and rak ups lots of kills are more usefull than a so call " team players " who sit behind and does nothing ..

As for weapons , All BF have been different , in BF2MC medic had a medpen type of thing , Mortars calls , and a LMG , the BF2 PC was different and so was BF3 or 4 Medics wich became a variant of the assault sub class ..

The plain reality is there is NO benefits to the old classes system .. Zero benefits .. forcing players into X and Y weapons or gadjet link togueter make no real sens and does not had any benefits to the gameplay or teamplay .. Now at least Some snipers can be Medics and be usefull instead of having x and y gadjet they wont use same goes for any classes ..
Also it remoove the corny ability to swap classes just by swaping guns on the ground wich was to me more of an exploits than it was a feature
Message 264 of 704 (123 Views)
Reply
1

@DanielRicciardo
The guy isnt a gameplay designer , he is a narative director . So i am glad if he remoove Corny lines and specialist Ugly faces ... But the design under the specialist system and loadout system is really good and should be untouch . Only cosmetics , Corny voice lines etc.. should be revisited

But if he can bring more sens and seriousness to the franchise with backstory that make sens , and NO corny Apex / borderlands type of stuff ill be happy about his work .. Other than that he wont touch the core gameplay or design of the game , This aint his job

@Stew360 You hardly even play the bf games. Its like me telling the CoD community whats good for their franchise going forward. . Classes represent the real army structure of having front line medics, recon units, engineers who build and repair and the front line grunt assault class. All this based with models representing guns and vehicles.
Message 266 of 704 (116 Views)
Reply
2

@fragnsteinOh really ?  Well last time i check ive played thousands of hours in BF games From 1942 and thousands of hours in BF2 and BF2 MC as well as almost 800 hours in BFBC , Thousands of hours on BFBC2 on PC and Ps3 and X360 yep i had it on all 3 platform but the X360 version was terrible .. Then BF3 BF4  i hate world war games now so i barely played BF1 and BFV and didnt like it .. its to old and boring ! My favorte BF game is 2142 because the titan Mode was incredible attacking the titan was amasing .. Also i have over 3500 Hours + in planetside 2 and 1000+ hours in planetside 1 so yep  And so far 400 hours of BF2042 so i think i have a pretty good grasp of every aspect of it .. Air Ground and Vehicles , 120mm tanks , etc.. I am a combine arms game guy so i know my stuff 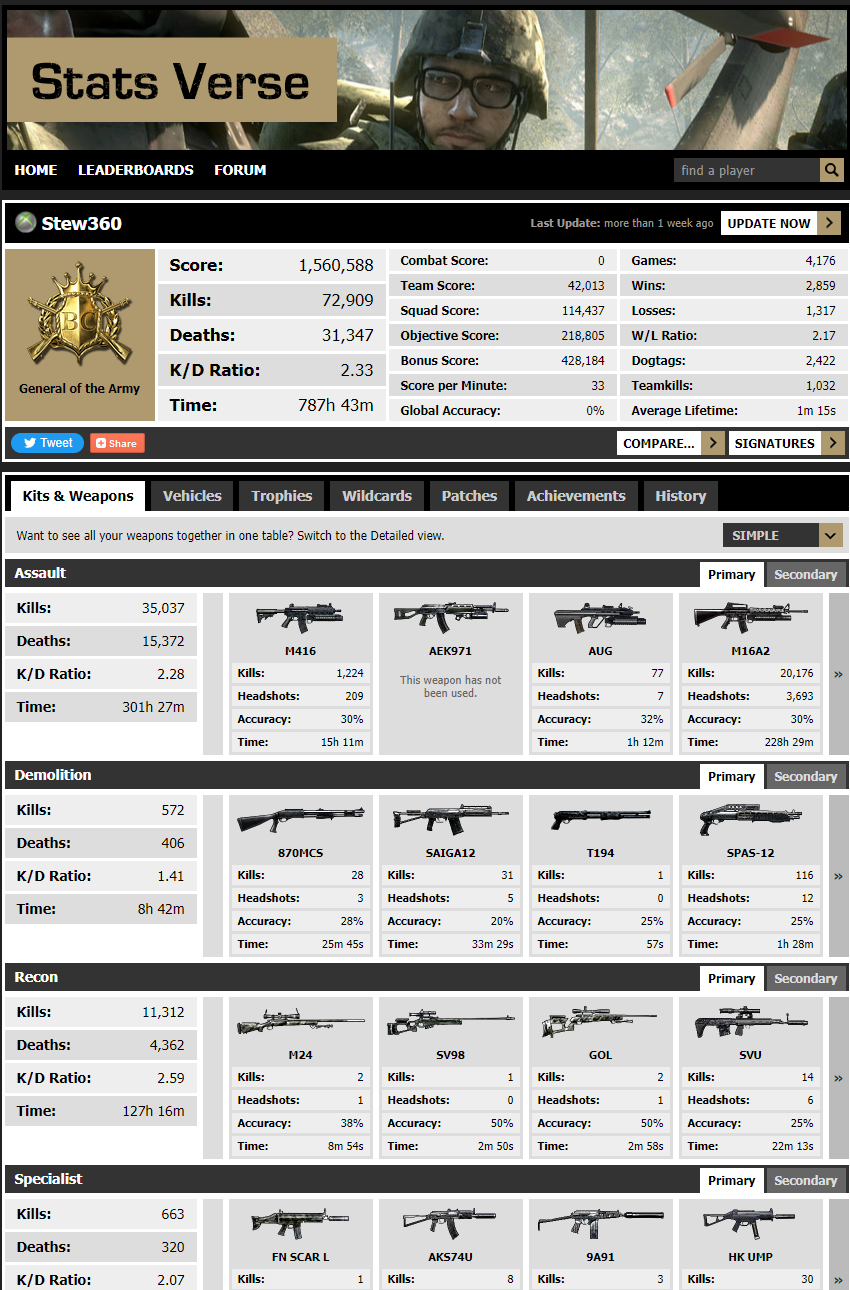 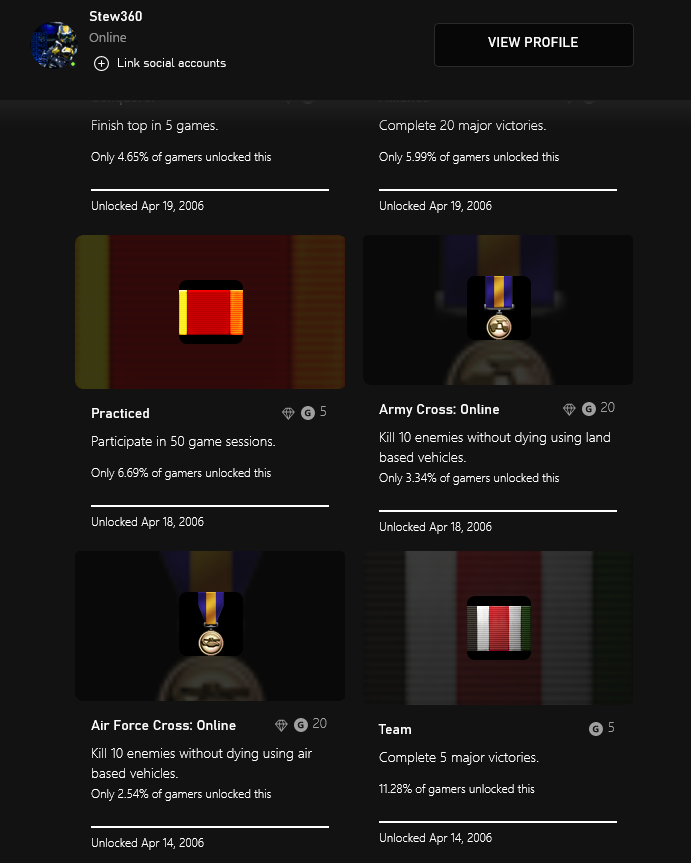 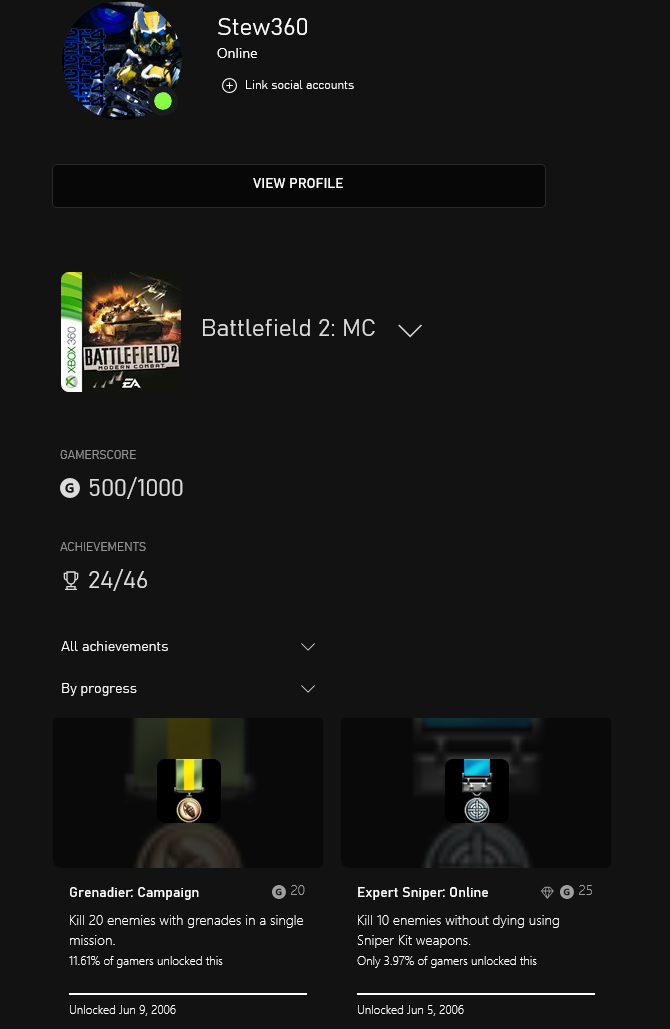 And i had all the DLC for every games 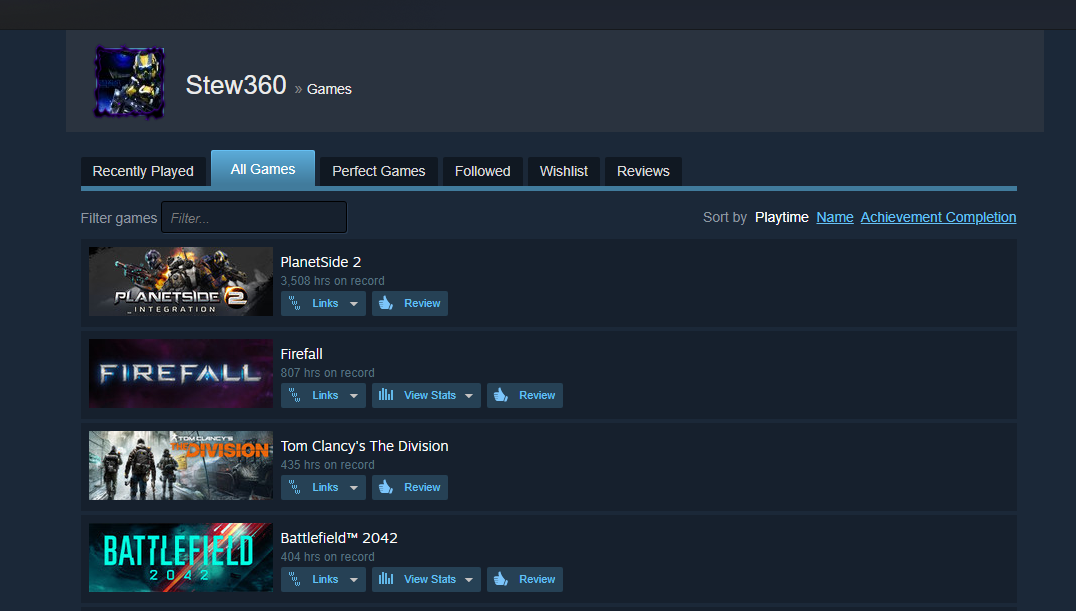 Also the main reason we abandonned BF in favor of planetside 2 it was become BF never offered bigger than 4 to 5 squad members and we had a community that was able to put 20 to 30 guys at the same time ... So we got frustrated and anoyed that the match kept switching us from side to side while in the same party .. the game did not allowed us to play togheter and so much more issues with finding match we got bored of it .. So we got into planetside wich always had sufficient room for us to play as a team as a clan 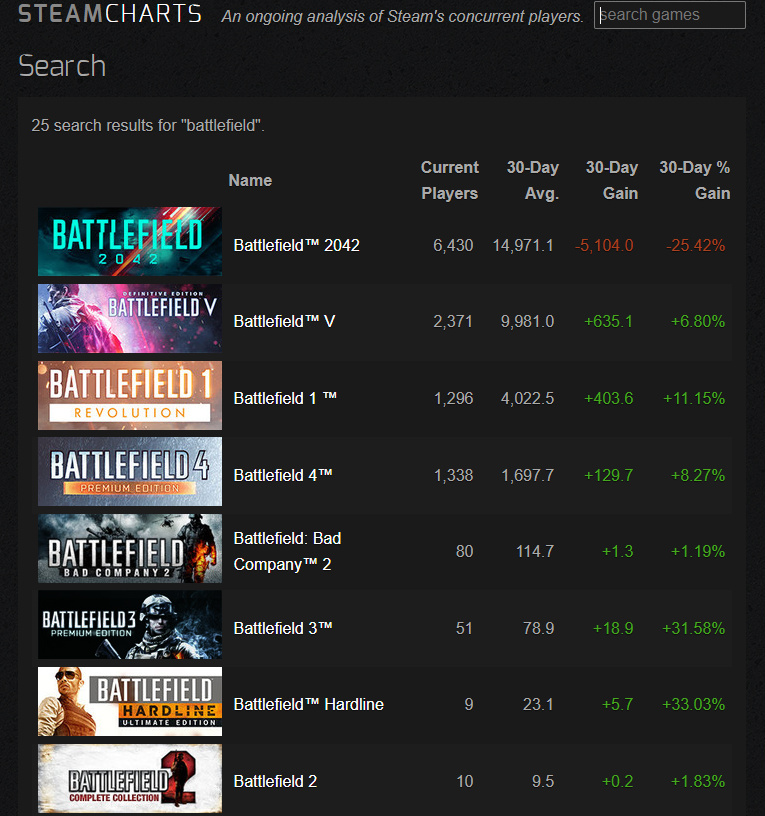 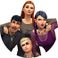 @Stew360 no, you are the one trying to conveniently choose their moment.

I already posted this earlier, but it seems you haven't noticed it or just don't want to acknowledge it.

Note, this is from yesterday so the situation would be even worse now.

At the time do doing the graph yesterday BF2042 averaged 85% of BFV's player count over the week.

@Stew360 I think what @fragnstein is trying to say is that you haven’t played the newest games for thousands of hours. You don’t like world war games that’s understandable but then you have no clue how good BF1 was and although BFV is never going to be as good as BF1/3/4, it’s still a solid game now. I don’t blame you for not playing the latest BF games which were World wars but then saying I played more than 1000 hours of BFBC,BC2,2142,2,1942 is irrelevant because they are the oldest games in the franchise and a lot of stuff has changed since then. BFBC2 being more than 12 years old at this point. So the last time you played a Battlefield game properly was probably like 8-9 years ago. Although you can express your opinion on this forum I don’t know how right it is for you to defend 2042 when the last battlefield you played was in 2013. I’m with @fragnstein on this one.