If there's one thing I've learned over the years, it's that games find a way... (yes - that's a Jurrasic Park reference..

I find easter egg of Mass Effect Andromeda ... I laughed when I saw it. I wonder if it can be hugged 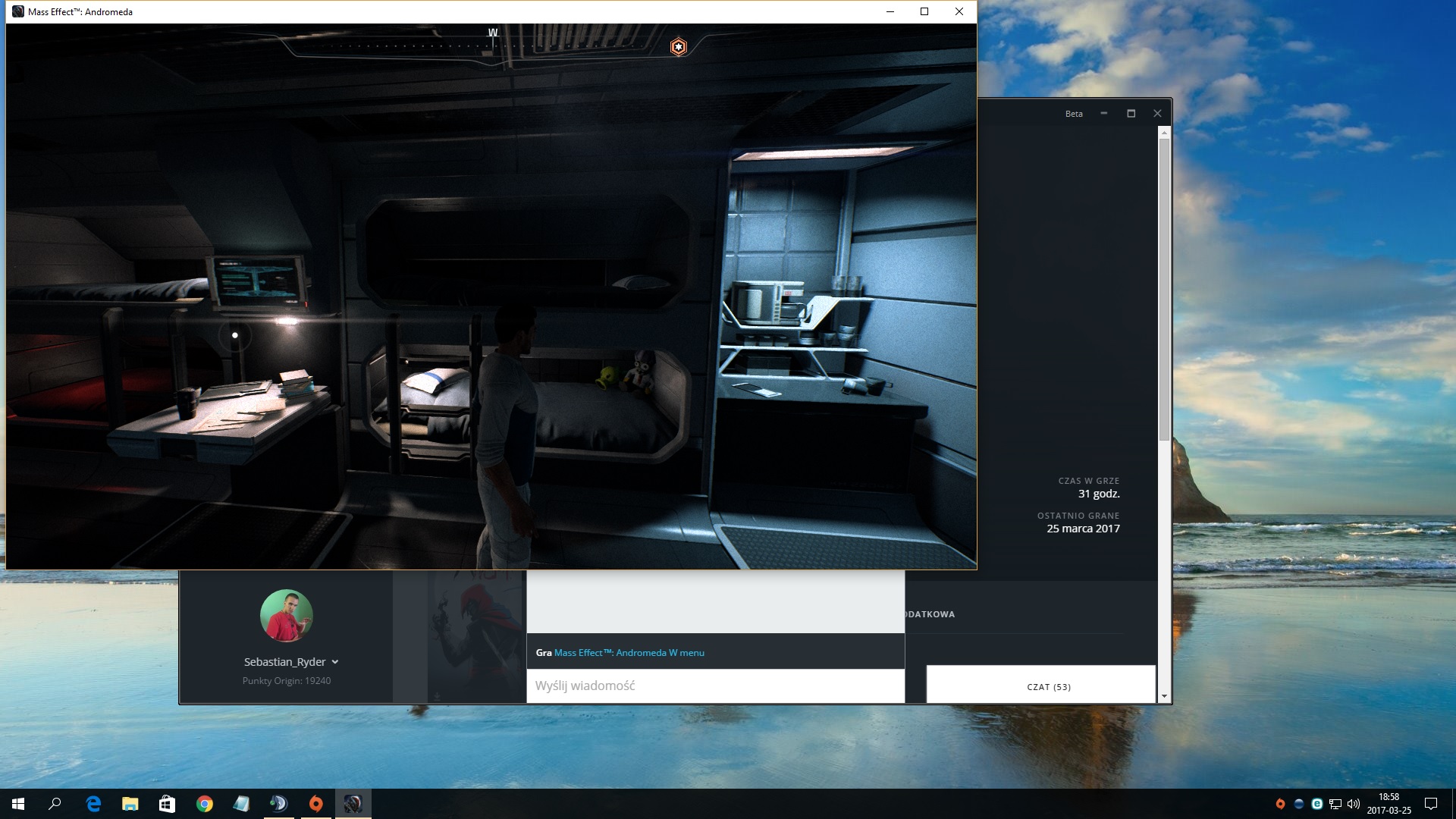 
Wow, you mentioned two awesome games in just one sentence there. I don't think I need to say anything about Goldeneye, but Shadows of the Empire was really well done! And I must say, it's pretty cool that your dad programmed a game for you guys - big kudos to your dad.

Since you are from Belgium perhaps you had some of the same computer magazines that we had in the Netherlands. Back then computer magazines usually came with a cd containing game demos etc - I tried out lots of those. It's usually how I came in contact with new games.

Not sure. We didn't have any game magazines. My brother bought this shovelware CD of C&C1 and Warcraft II custom maps though (called Tactical Operations. Still got that thing!), and that contained C&C1 map making, mission making and modding tools though. That's how I got started on messing around with C&C1.

But you weren't the only one with a slow PC. When I first started C&C 95 my system did not yet have a Pentium, so I couldn't turn up the game speed at all which meant that I always played it at its slowest which was... really slow. I didn't know any better until I tried it at a friend - it was hard to go back to playing at such a slow pace from there..

Ow. The DOS 320x200 game is supposed to be played at middle speed, but that already feels really slow in the 640X400 Win95 port, since you just see 4 times as much terrain, so your reaction speed to events is a lot higher since you need to scroll less. One of the problems (in my opinion) with unlimited resolution in the game is that people just don't bother building a communications center to get access to the minimap; they no longer need it. It's a bit like how Supreme Commander evolved beyond the minimap, heh.

If the PC wasn't a pentium, though, I'd say installing Windows 95 on it was a bad idea altogether...

Like a lot of people helping out around this place, I am a volunteer, not an EA employee. I'm just here to help. If my answer helped you, please give XP. And if an answer solved your problem, be sure to accept it as solution.
I will not help with game questions sent as private messages; those questions belong on the boards where everyone can see my answers.
Message 24 of 31 (247 Views)
Reply
2

It's interesting that a simple disc with some files on it got you into being such a big fan - I guess some things in life do get handed out! It's worth noting that for me it was the other way around where I got my older brother into gaming. There I would like to add that as a child I regretted that somewhat as he would sometimes hog the computer and I couldn't fight him off as he was much bigger..

re: Mini Map - now that you mention the Communications Center, I do have a vague memory of completely skipping that building. But most likely not for reasons of not needing the minimap - mostly because I was a newbie and didn't care for it or something (it's ok to laugh at me).

re: Pentium - I can't remember exactly what system it was, but my parents upgraded it eventually - I do remember that installing Windows 95 with something like 30 or 50 floppies. Good times - LOL!

Too bad he was disappointed with the C&C1 expansion just being some missions, and never bothered buying any of the later games' expansions. I know he had TS+Firestorm at one point, but it had no videos. Years later, I found and bought a collection pack of TS and  RA2 (and Renegade) with all expansions included. It was awesome seeing the Firestorm cutscenes for the first time. They really went back to the C&C1 style briefings there, and I liked that a lot more than the TS "You're that Michael Biehn there" approach.

Like a lot of people helping out around this place, I am a volunteer, not an EA employee. I'm just here to help. If my answer helped you, please give XP. And if an answer solved your problem, be sure to accept it as solution.
I will not help with game questions sent as private messages; those questions belong on the boards where everyone can see my answers.
Message 26 of 31 (234 Views)
Reply
0

My gaming days as a kid would have been a lot easier if my brother kept buying games...

But for you it must have been cool finally seeing those videos after so long. I bet it made them that much better to see!

@Straatford87, @Nyerguds  Bought my games and PC's with a lot of giving up. Learned the hard way how to use sales and such, so to be able to save more money for more games. As a result, i rarely buy outside of sales. The last year i had a few games that i've actually paid full price: Stardew Valley, Thea: The Awakening and Renowned Explorers, all cool little indie games. In 2015 that was Van Helsing and the PC port of Valkyria Chronicles (now this is one game that deserve more love than it has, you really should grab it, as it gets in  a lot of sales lately)

As for another really nice story, in my early gaming times (back when i was the odd kid that bought a Sega Mega Drive instead of a SNES, a decision that i never regreted) i've got myself the console version of Dune 2 from a friend. Not only that, but the game was in german, as the copy was meant for the german market and the game was really hard to find around here. If my friend was a rather fluent speaker in german, i could only guess what the screen messages were about. But, i like languages and i can catch fast if needed

So my friend brings me his german Dune 2 copy and starts showing me the game. I notice that he avoided one faction, namely Ordos. I ask him why and he gets a wee bit emotional (read angry) and tells me that you can;t finish the game with the Ordos. I told him that i can't believe that and he probably missed something. He tells me that he couldn't miss anything and that he challenges me to finish the game with Ordos, betting that i will not be able to. Well, challenge accepted. So he spent the weekend with me and watched me progressing through the game, showing him that the strength of Ordos were the rocket launcher and the deviator tanks, with the deviators taking controls of the devastator and the sonic tanks, protected by a few medium tanks, while the rocket launcher would lay waste to the enemy base. At time i would send a turned devastator in the atreides/haarkonnen bases (always kept the haarkonen alive to let them produse devastators) and detonate it inside, while would slowly destroy any defensive turrets and walls. Needless to say, i won that bet and got a pizza of my choosing

And yes he honored the bet. It was a sweet week-end and we had a lot of fun. He would tease me when things went wrong and i would start the level over and come up with a new strategy as a result. I kind of miss my old Mega Drive. Played a good number of EA games on it ( Road Rash, some of the Strike titles, some of the old FIFA games, some Madden, James Pond and some other games from the era). Will point that i was the happy owner of a Sega Genesis adapter, so i could play games meant for US market.  Funny thing, i've started to play in arcade halls, switched to Commodore at some point, consoles and finally on PC. The PC proved to be the platform that had the most appeal to me. You could use it for gaming, had a lot of accessories (joystick, gamepad, mouse, keyboard, headphones and so on), but you could use it as a music player, movie player or for serious work. The sheer versatility of PC made me to remain on it. Add to that the upgrade possibility (limited only by the change of technologies) and you have a winner.

Ah, the megadrive version of Dune! I love that version. Frank Klepacki did the intro voices of that ("Dune: The Battle for Arrakis!"). I actually made a small mod to put those in the PC version.

Fun fact: some of the most interesting innovations that led to Command & Conquer actually came from that version. Most notable one is the context-sensitive cursor to replace the cumbersome sidebar buttons. It was a simplification needed to make the game playable on more limited console controls. Sega Genesis Dune is also the first RTS game with an actual track playlist, and named tracks

Like a lot of people helping out around this place, I am a volunteer, not an EA employee. I'm just here to help. If my answer helped you, please give XP. And if an answer solved your problem, be sure to accept it as solution.
I will not help with game questions sent as private messages; those questions belong on the boards where everyone can see my answers.
Message 29 of 31 (183 Views)
Reply
2

I played Jurassic Park on the SNES for months with my brother. The thing that makes that interesting is that the game was in French, which we didn't speak. We had no idea what was going on but for some reason we still had a lot of fun with the game (to this day we never finished it though).

Your challenge story also reminds me about playing a game called KKnD (RTS) with a friend. There was this insanely hard level with one of the factions that we were stuck on for weeks. One day my friend finally came to the final part of the level after which I accidentally hit the power button of his PC with my knee which turned of the system....