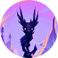 A proposed change to Loba that I've seen is that she can use the black market to get her teammates banners. But that is too similar to what Crypto could do and wouldn't really make any sense. What if instead of that, she could steal enemy banners from them with her market. Have it use up an inventory slot and pause the countdown to death to give people an opportunity to kill Loba and get it back from them. Also, to avoid it being too OP with no drawbacks, Have it break the black market when you steal it. Meaning Loba can only steal one at a time, and while her teammates could technically get their items beforehand, you will most likely be using this in a fight so it's not necessarily practical for them to access the market.

I've thought ahead of any potential problems or abuse with this system. To avoid that, Loba wouldn't be able to drop the item, and upon her or the enemy leaving the game or their team being wiped, the item would simply just disappear (though in the case of her leaving the game and the people she stole it from still being alive, the banner would be returned to them). Also, if Loba herself decides to troll and drop off the edge, the item would immediately go back to the player's deathbox And if Loba were to die from another team ( a potential third party), the banner would be returned to its original owners. And to make it more practical, they wouldn't have to go back to the dead teammates deathbox to recover it, it would just automatically be given back to them and they can proceed to go res their friend.Thoughts?

@GeneralGraveous It's an interesting idea but I think this would just make players raging mad.

I think a better buff for her is going to be around her tactical, making her tactical stronger is what will close the gap and make her a better legend. Mobility is everything in this game and being able to move around quickly in a fight is what wins them.