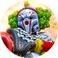 Most locations are to small, to close together and near chokepoints even worse than Worlds Edge, at many locations except for few its nearly impossible to arrive without getting fired upon immediatly because a squad can easily cover all angles and there is not enough cover. Also when you run from the ring into another location expect snipers to give you away and immediatly getting gangbanged by all other squads since virtually everyone knows where you are and that you're in a bad situation. making no smart play possible except for "well lets just hope that they get 3rd partied first".

I hope Respawn makes a new map and Worlds Edge be a LTM map.

@BigBlackCausticAgreed. Kings Canton is essentially skull town and then a giant ditch choke point. Much prefer the variety and size of Worlds Edge.

Opinion in world edge before city got destroyed and new location were made: Looting looting looting first fight that is actually a last fight and boom you're champion or not and whoever you fight got all the golden stuff or at least purple.

Opinion in world edge after city got destroyed and new location were made:Land in  destroyed city with like 5-10 squads, after big fight you see that actually you're in top 3 and you didn't even left city yet. The point that I'm making is that new places are really nice but we need more places like that to make map actually not only look good but also be good.

Opinion in king canyon: always were my favorite. People landing everywhere loot is not the best so fights are different. Golden stuff are rare as it should be. And classes looks more balanced in this map compare to world edge. For example : Lifeline ultimate "care package" in world edge sucks because everyone got good stuff in first landing while in king canyon it's opposite.

Game too hard when you cannot drop a mile's distance from the nearest team?

KC is only geographically smaller. More buildings and locations, much more verticality, and more loot.

Just gotta get familiar with the map.

But King's Canyon isn't garbage.  It's a different map.

There are two maps right now.  People should learn how to play each, because neither is going away for good.

@PROInD3i agree with the loot part, but thats more of a balance problem, loot vault would be balanced if it would have purple equipment and a lot of supplies like medkits and batteries, would also make it feel more like a vault too and not a fancy and glorified closet.

Drones should also be rarer or not drop gold as often, almost every location has some garanteed gold stuff thanks to these.

@BigBlackCaustic Both maps have benefits and draw backs. I like Kings Canyon but I don’t care for the Deja Loot mode.

Deja loot has lead to all the players going straight to the best areas. Who ever lands first and survives always has their favorite load outs and best everything. The rest of the map just gets slaughtered..
Message 7 of 24 (1,547 Views)
Reply
1

@DarthValtrexDeja Loot was boring and uncreative, i remember 90% of my drops being artillery for the gold helmet, the two purple armors and decent weapon options, and i rarely had to fight for it and simply start 3rd partying right away, stupid high win rate. Dont get me wrong that was Deja loot mode in general.

Also i dont hate Kings Canyon, but i feel like Worlds Edge is way better than people give it credit for and its nostalgia and meta whoring that makes people long for KC, look at the amount of people that cried their eyes out before it even released and never stopped since.

KC has some heavy flaws that people easily forget about.

@BigBlackCaustic You should be banned for these blasphemous remarks.

Then why is your post pitched as if it was all new for you. I'm 99.99% certain you're lying about playing since S1.

You played all the way through S2 yet King's Canyon's basic were a new experience?

I'm not buying it.