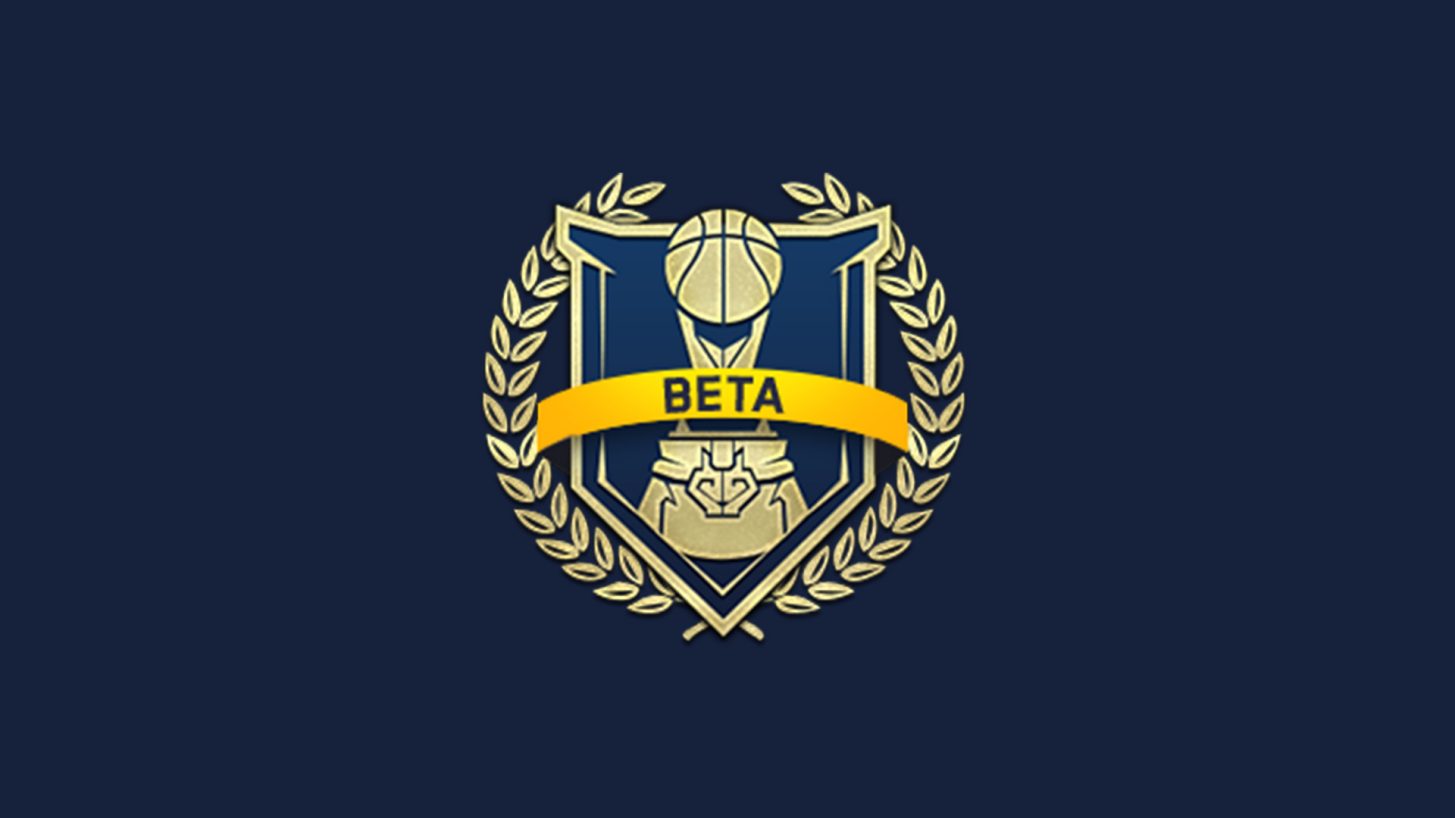 Very soon, we’ll be launching a beta of our new PvP mode  - The Arena!  For the first time ever in NBA LIVE Mobile, users will have the ability to play against opponents from across the world in real time.  To ensure game stability, we’ll be rolling the new mode out to players over time.  As we add new users, we’ll post updates on our social media accounts.

Users will get their first chance to play this new mode as a feature restricted beta targeted to release later this month!  We’re very excited to launch this mode that has been in development for some time and we know that real time competition against other players has been a request from our players and we can’t wait for you to get your hands on it.

The Arena offers a brand new way to play against other players.  Aside from it being in real time, it also uses a new tournament structure.  Tournaments in Arena mode challenge you to win as many matches as you can until you reach the max wins or lose a certain number of games.  For example, if a tournament is configured as 5 wins or 2 losses, your goal is to get as many wins as possible, up to 5, before you lose 2 matches.

Rewards are based off of the number of wins achieved during the tournament. We will be adding new and different tournaments over time, so be sure to keep checking back! 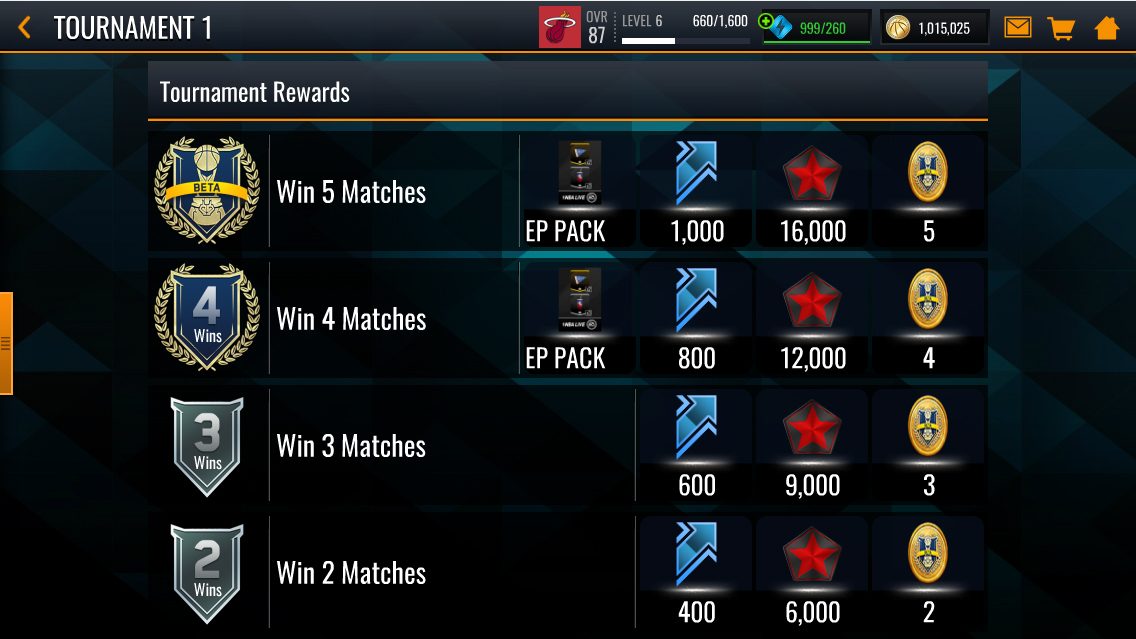 For every win in a tournament, you’ll accrue 1 Arena Point, which works similar to other point collection systems.  The more points you accrue, the more rewards you unlock! 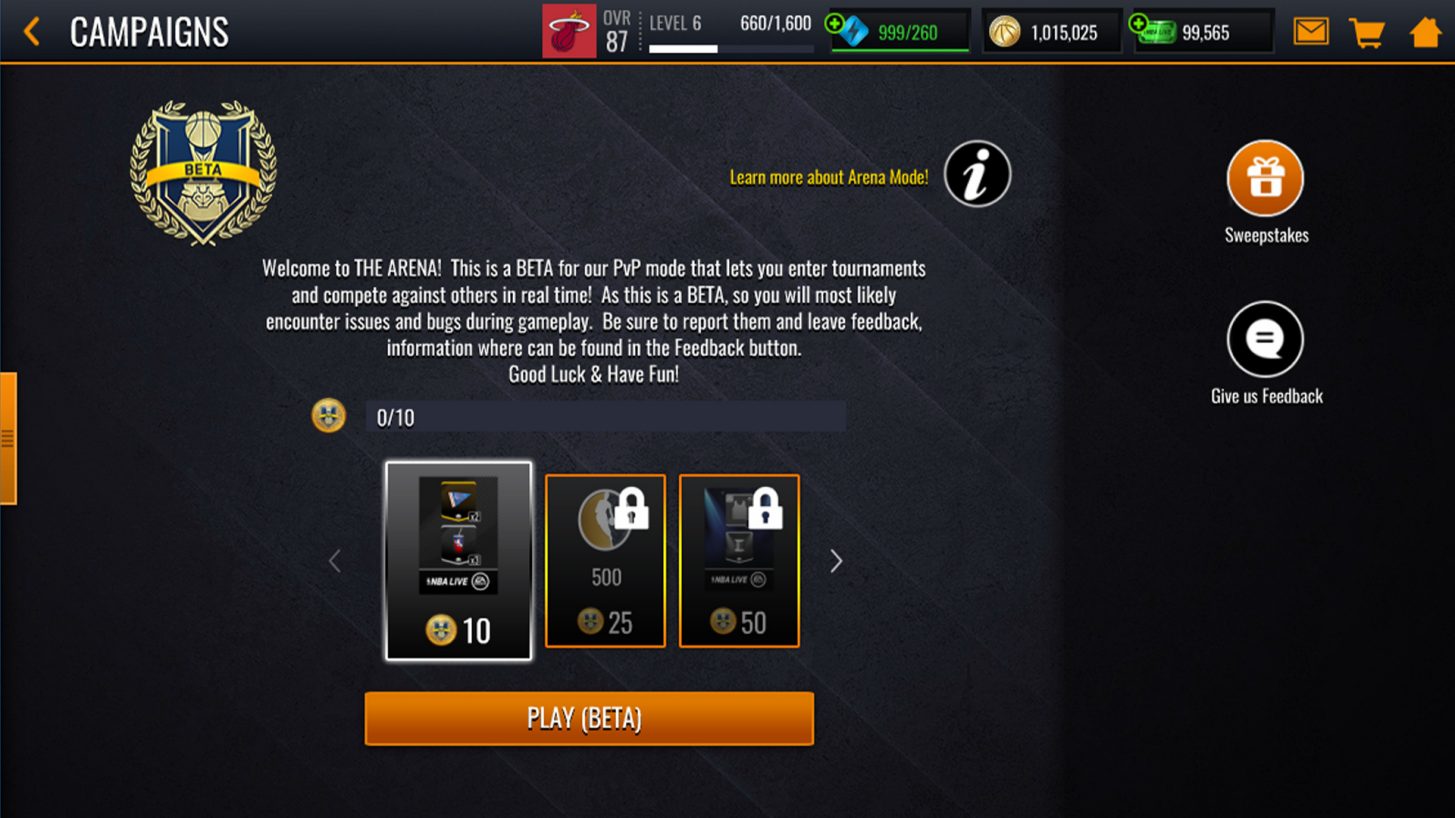 Another exciting feature we’ve added in Arena Mode is the ability to communicate with your opponent during a game! Hit a deep three?  Get a sick block?  Send your opponent one of 4 preset messages or one of 4 different “emoji” pictures! 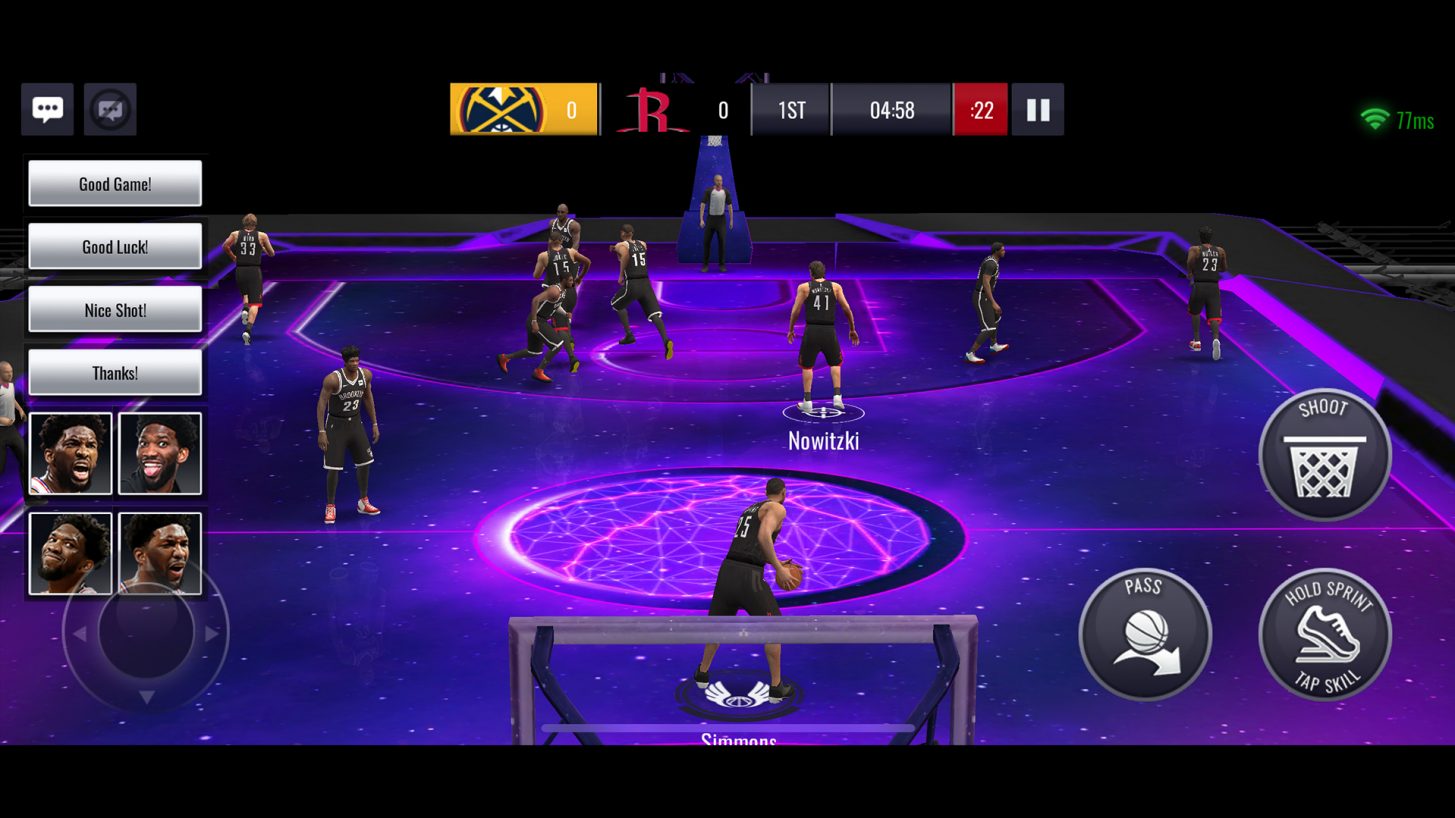 Don’t want to see in game messages? Tap the button next to the communication drop down to mute them during your match! 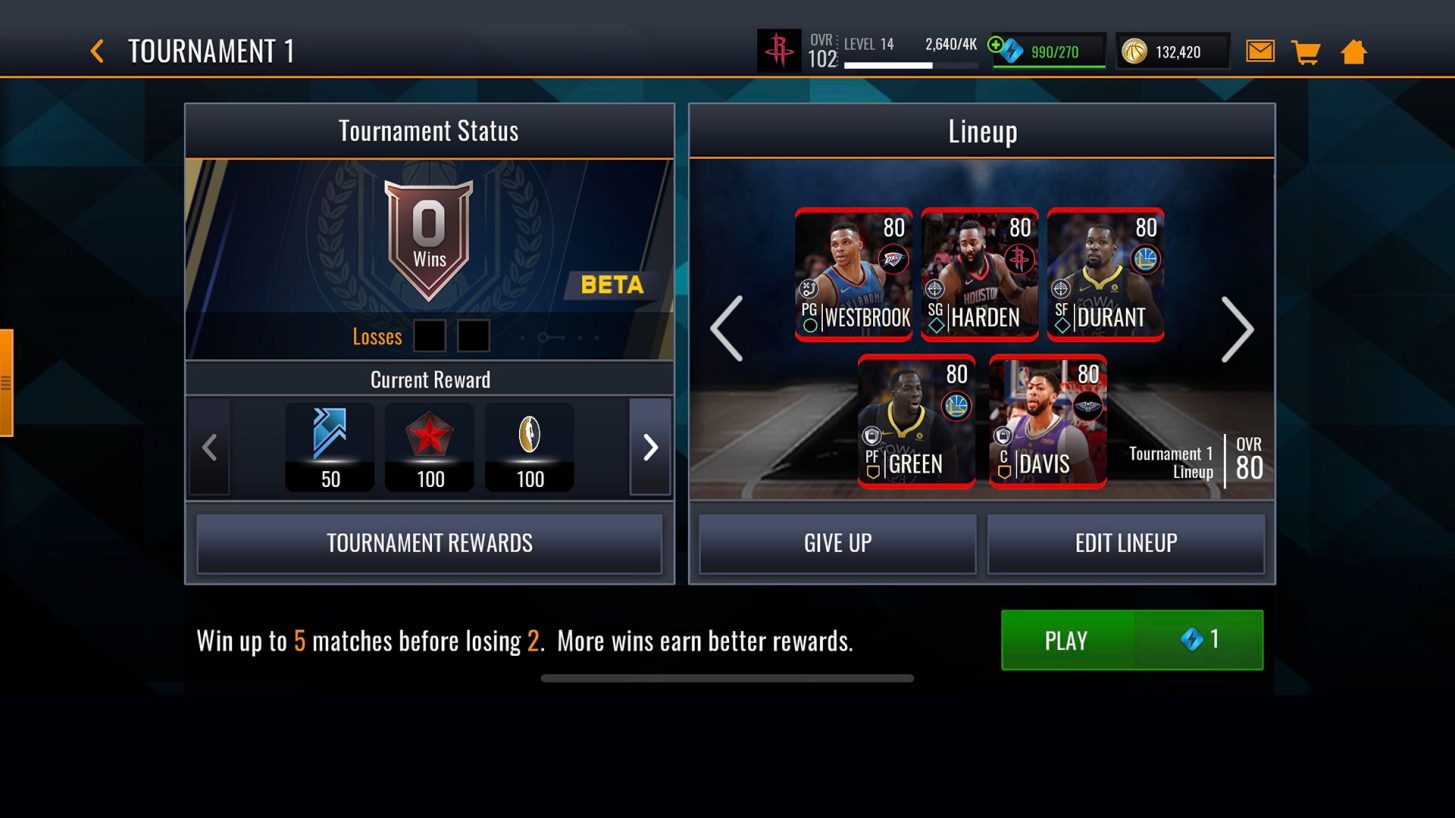 Up until the launch of Season 4, we’ll be sending out weekly prizes to reward anyone who plays Arena Mode!  For every match you play, you’ll be entered into the drawing once. Multiple plays will enter you multiple times!

Each week we’ll draw a few lucky players and send them some prizes just for playing! Be sure to keep playing the mode to increase your chances at winning! Even if you don’t win, we’ll be sending out some Arena Points to all users who play at least one match a week.

Be sure to keep an eye on our social channels for more information!

Q: What is Arena Mode?
A: Arena Mode is our new PVP mode where players can match up against other players
and compete IN REAL TIME!

Q: How does Arena Mode work?
A: Arena is different than Showdown in that you don’t just matchmake right away. When
you select the Arena button in the main menu, it will take you to a carousel of active
tournaments. These tournaments have different restrictions on entry, such as lineup
OVR, specific lineup and more. Select the tournament you would like to enter and tap
the play button!

In the first phase of the beta, there will only be 1 tournament to choose from. Be sure to
check back over time to see when new tournaments are added!
Tournament rewards are based on how many times you win before you complete the
tournament or reach a certain amount of losses. In our first tournament, you can win up
to five matches or lose up to two matches. Once you reach either condition, that
tournament will end and you will receive rewards based on the amount of wins you
achieved.

Q: Can I enter other tournaments while in an active tournament?
A: No, once you enter a tournament, you can only compete in that tournament until you
complete it or press the “Give Up” button.

Q: What types of tournaments will we have during the beta?
A: The current plan is to start with one tournament and add more over time.

Q: How does matchmaking work in Arena?
A: At the core, it utilizes the same matchmaking as Showdown. However, we do
matchmaking that prioritizes by region to ensure that you are getting the fastest and
smoothest experience possible.

Q: Is gameplay different in Arena?
A: For the most part, no. However, you’ll notice quickly that playing against other users in
real time is very different! There are some penalties that we don’t use in most of our
existing game modes that will be present in this mode in order to ensure fair play.
We are also restricting the use of manual switch on defense due to technical limitations.
All Arena matches are configured to use auto switching while we investigate possible
solutions.

Q: Can I play against others in real time in other modes like League vs. League or
Play a Friend?
A: Not currently, no. We are looking into the possibility of this in the future, but nothing to
announce now.

Q: Can I choose what lineup I play with?
A: As long as it meets the tournament requirements, yes! For example, if the tournament
requirement is to use a lineup at least 80 OVR, you can use any lineup you have as long
as it is 80 OVR.

Q: Why is Arena launching as a beta?
A: With a mode as complex as this, we want to make sure users understand that there
may be some issues while playing. We’ve put the mode through extensive internal
testing, however, with a player base as global as ours, there are bound to be some
issues with a roll out.

Q: When does the beta begin?
A: The beta is scheduled to begin in mid to late August.

Q: Who can participate in the beta?
A: All users will be eligible. The beta will be in the standard client version of the game
that you already have. To ensure stability, we will start by rolling it out to subsets of users
in specific regions and continue to expand after that.

Q: How long does the beta last?
A: We’ll be running Arena as a beta after S4 launches.

Q: What can we expect after the beta has ended?
A: We’re currently working on adding more functionality and features to Arena mode.
Nothing to announce today, but hope to release more info as we get closer to the full
feature release.

Q: Where can I leave feedback on the Arena Mode beta?
A: There will be surveys in game during the beta and you can also leave feedback on our
different social media channels. Lastly, we have a EA Help page set up so you can see
the latest known issues and let us know how your experience is. It is located here!

How can you lose a game, if your opponent disconnects or "interrupts", if the games are in "real-time"?

What happened if it dont give you the win

@EA_Roger I like this game mode very much, but unfortunately, nobody wants to play this game mode. Everytime when I tried to find for opponent in this game mode, basically every time doesn't have any responses.
Message 6 of 9 (1,361 Views)
Reply
0
Highlighted

It would be better if you would add some skills,it would make the game better.

Does this mean we can't play the season mode till the Arena mode is over?

Cos mine stopped working over a month ago, the season mode keeps loading endlessly, can't play a game.