I prefer to stay moving with the Storm using the frost shards(primer) and follow with Glacial spear(detonator). some times use the fiery strike for melee for the detonator if I want to go in close

The mighty Colossus has perhaps one of the greatest independent combos there is!

For this combo, you will need:

Apply fire to the enemies with Flamethrower, then blow them up with Lightning Coil!

As a tip, Lightning Coil is toggled on and off, so you can actually toggle it on, then start dousing things with Flamethrower while it keeps zapping. This allows for some very heavy damage output to groups of unshielded enemies. Remember: shielded enemies do not get primed!

@EA_Alexandererrm, how to make a screenshot?

Buy an Nvidia card, Shadowplay lets you take screenshots or even videos

You may also be able to use PrintScreen or Alt-PrintScreen, but that just puts your screenshot into the copy/paste buffer, so you’d then have to paste it into Paint or something.

Love my Storm, but until you get gear some of the combos feel a bit off. This is how I like to play my Storm so far.

1. Frost Shards [P] + Lightning Strike [D]: When you are looking for easy ice prime with spread. Easily freeze weaker enemies without shields and then lightning strike to spread the freeze to nearby enemies. Also Lightning Strike is very powerful ability to rip the blue bar (shield) from stronger enemies, and then Frost Shards after to freeze them so your team and pick them apart. Or you can shoot them with your gun.

2. Frost Shards [P] + Flame Burst: Allows you to still prime and control enemies to an extent, but Flame Burst has a much faster recharge and lets you clear an area of weaker enemies much faster. Also can target weak points easier than Lightning Strike to chunk an enemy.

Medium High Damage - Less reliance on your guns for the damage.

3. Burning Orb [D] + Ice Storm [P]: One of my more favorite ways to go. Allows you to spread freeze much faster on multiple enemies at once, but has higher damage of its own. 1 charge can freeze a bunch of weaker enemies allowing you to use the very spammable Burning Orb to clean house while still spread freeze even more. Allows you to still prime/control for team but have much better damage and able to take on things solo while group is in other places much better.

4. Burning Orb [D] + Binary Star [P]: Normally I don't are for Living Flame. It likes to fizzle out before reaching things too much because of it's sometimes wonky AI. But Binary Star, the Masterwork/Legendary version allows for two. Which when putting on enemies, allows for faster priming and damage to set up for Burning Orb. Feels MUCH nicer as a combo when using this. (Obviously Ten Thousand Suns makes this even better but putting a minimum to make the combo feel good IMO)

5. Burning Orb [D] + Flame Burst: When you just want to pump out damage and make the world burn! A lot of damage and the faster casting of Burning Orb allows you to catch combos off your team priming quite a lot. Just shreds things with lots of glorious fire!

The other set up just feel really bad to me, or lacking gear to make it feel better. The other abilities feel kind of weak compared to the recharge, or maybe just having gotten into a situation to make them better better. I guess if your intent is to prime a different type of situational damage for the team. Just doesn't give me that "ahah" feeling. Will try new builds as I get more Masterwork/Legendary components.

EDIT: Got a Legendary Seal of the Open Mind that I've been using with a Ponder Eternity. The SotOM has +300% charges, so 3 charges on this ability. With a lot of +speed I can just alternate setting electric prime and then combo exploding it. The chain is massive and the damage from all skills are pretty ridiculous. So actually makes a full lightning build fun.

Heres some love for the Interceptor Shield Shredder Combo

In this setup your running a primer: Cryo Glaive, or the Masterwork version: Absolute Zero 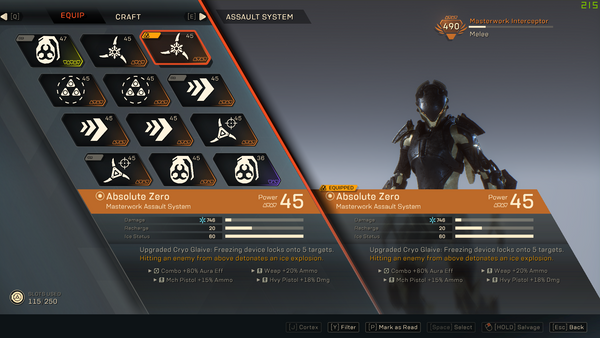 A detonator: Tempest Strike, or the Masterwork version: Sudden Death 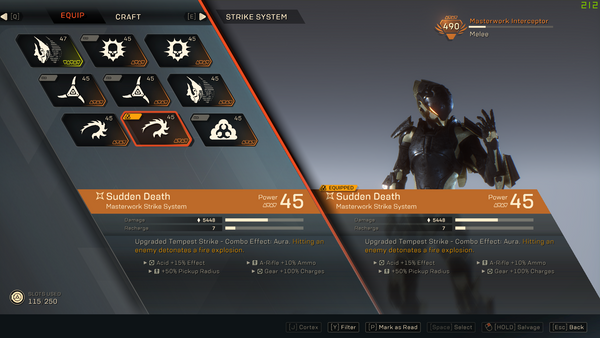 Your start out backwards to get the target primed, you first use Sudden Death on a target with shield. It is so satisfying to knock those pesky Scar Hunters or Elementalists out of the air.

Once the shield is off, you prime the target with Cryo Glaive, then you either detonate it with your normal melee attack, or your Tempest Strike if it is off cooldown.

The combo work especially good for Interceptor because your Ice Aura begins to freeze everything around you, and makes you take less damage from unshielded mobs because of the crowd control.

Remember to use components that compliment melee play, damage, and survivability. Get +Dam +Gear Recharge on your "E" ability. And get guns that help you get even more buffs like unending battle.

Stay safe out there Freelancers.

Build: The Song of Ice and Fire

Focus Seal; Burning Orb (Fire detonator, 5 charges, fast cast or hold to charge for a bigger explosion and to activate the detonation)

The Ice Storm is great for all round crowd control. Combined with the detonation of a charged Burning Orb enhances the AOE. The rapid fire Burning Orb is also great to rapidly kill several adds or put some damage on an enemy shield. The fully charged shot is great against the yellow bar adds and bosses. (Use elemental synergy and elemental empowerment components to gain 30% dam and 30% recharge) 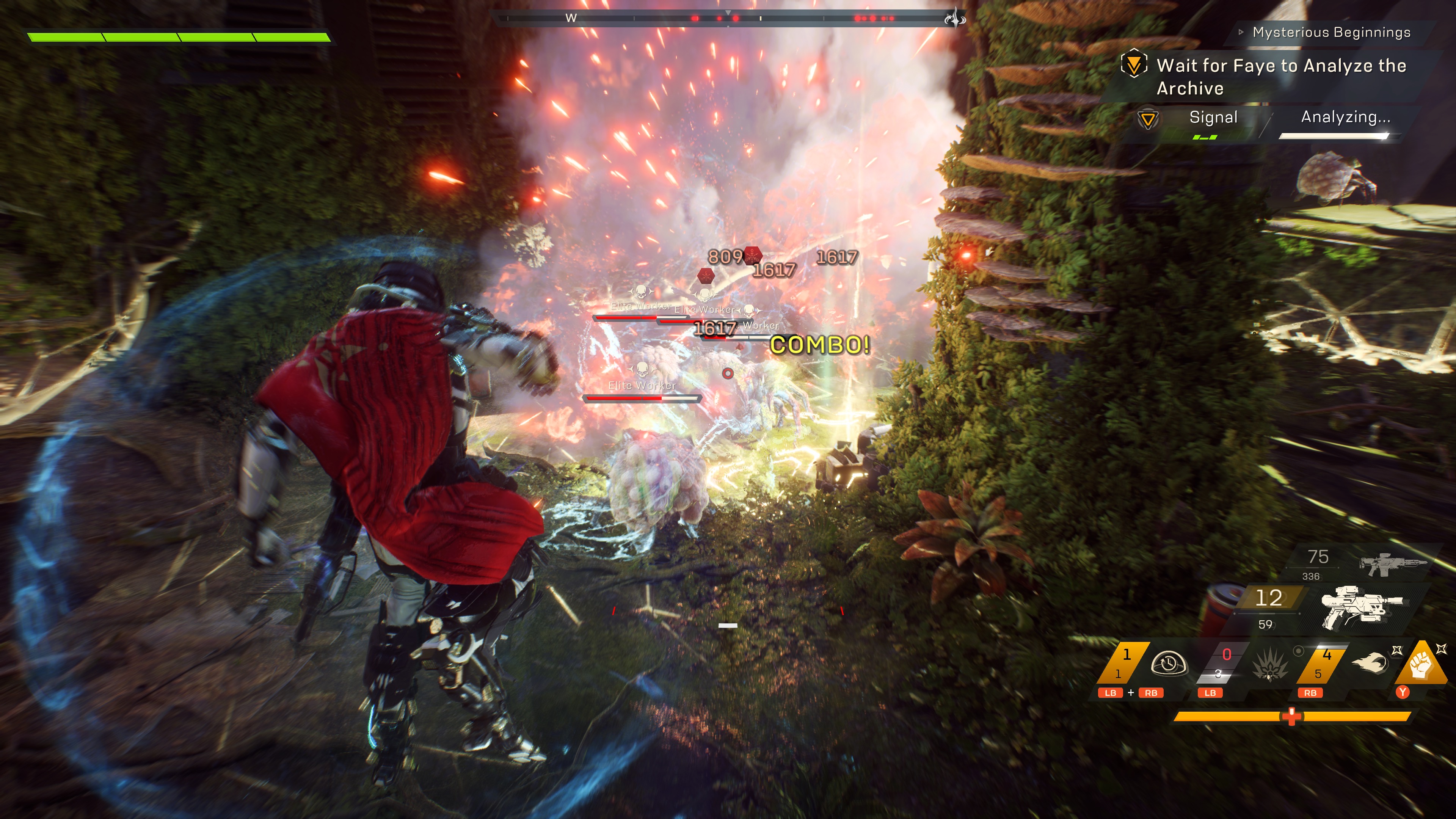 Each and every Bioware game had a screenshot binding, except Anthem. At least I am unable to find one.

Inferno grenade plus pulse blast on the Ranger.

Awesome mid range combo that is great for taking down Swarm brutes.

Combine that with your LMG or SMG for stripping shields + the Devistator Sniper Rifle for crowd control & you have a build with complete independence.

Load up a Bulwark point or a Muster point depending on what kind of mission you are running & show off how just because the Ranger is the basic suit doesn't mean it is redundant after you unlock the other suits.

One of my biggest complaints about the game, isn't the lack of stuff to do exactly, but a lack of quality stuff that is actually in the game already.  Primers / detonators / masterwork perks.  They're aren't enough of them, or they are just plain bad.  There is a handful of awesome builds, but only 1 or 2 for each javelin.  And over half the masterwork perks are either lame or worthless.

Of the builds that are actually fun and useful: Flamethrower / Lightning coil is my favorite.