Thank you all for discussing the thread i made, finally i have found some proof that they know about it and are working on it in the most recent patch notes.

Ignore how horrible the red square around the subject was :P

I'm having this issue as well, and it's only for armor/shield and only the rare quality. They are supposed to be given at Freelancer Loyalty 2 (press ESC > Challenges > Factions > Completed Challenges > Freelancer Loyalty 2). Instead I believe we were all given the Level 3 Epic ones in place of the Rares like we should have, and then upon getting Freelancer 3 (which I have) it should have unlocked all of the Universal ones but it has not. This is a bug on BioWare's end and has existed since 2-15.

And it is seriously hindering my gameplay because for some god forsaken reason the Epic ones cost 5 ember each which is fat too much... yet you need them to do GM1+ content to earn MW components so I'd love to have all 3 armor or shields available.

EDIT: Wrong image, stay tuned while I find them.

You really don't. If I may offer an alternative.

When I was epic'ed out, before I MW'd my Ranger, I spent alot of time ducking in and out cover. It takes some situational awareness, and you cant just brute force your way through it, but it does work. That, and let other people engage first. It feels kind of.... skanky to me, but if other people rush in, they wind up being bullet sponges for you. I'm a pragmatic * like that. They may get the glory, but I stay alive alot longer.

Also, there is no dishonor in retreating long enough to get your shield recharged. As a matter of fact. Its a time honored technique.

Exactly this. Not only is there apparently something wrong with unlocking these sigils, but looking through my challenges, I find nothing in current or completed achievements that mentions the blue shield and armor sigils.

But as you said, 5 embers.. That's kinda expensive. Especially when I would most likely be using blue sigils, if they were available.

You get the Heat, Shield , Armor and Gear consumable blueprint from obtaining level 10, 20 and 30 pilot rewards. Green, blue, purple, respectively.

somewhere along the path, the game forgets you have the level 20 rewards.

Workaround: I made a second pilot and reached level 20. This forced the system to reward my new pilot a 2nd consumable slot, and re-reward the blueprints. Which also added back to the other pilot.

I will continue this new pilot to see if the reward stays.

Edit: I also found out today, that they were not aware of the workaround. I may be the first to discover it. This also means the work around can also given them insight on how to defeat the bug, once and for all.

Basically they need to force the system, as a patch, to check like on level 21 and higher to make sure your 4 blueprints are always there, and quietly add them if not.

I'm not ready to start a new pilot and level it up to 20, and hope it works.
This should be an easy bug to fix, a little check for everybody higher than lvl20, and make sure everybody has it. This will surely help my Storm in gm3.
Message 35 of 39 (136 Views)
Reply
0

I still have sigils and there has been no bug. Besides, getting to levels 20 is the time of 2 or 3 days.

PLUS.. any blueprints you have unlocked you can make for your new pilot, and you have access to all your materials.

you retain any and all challenges or advancement you currently have.. this is why the trick works. And how to regain the missing bluepeints.

I noticed today I have sigil recipes that have been missing for weeks. Think there might have been a hotfix. 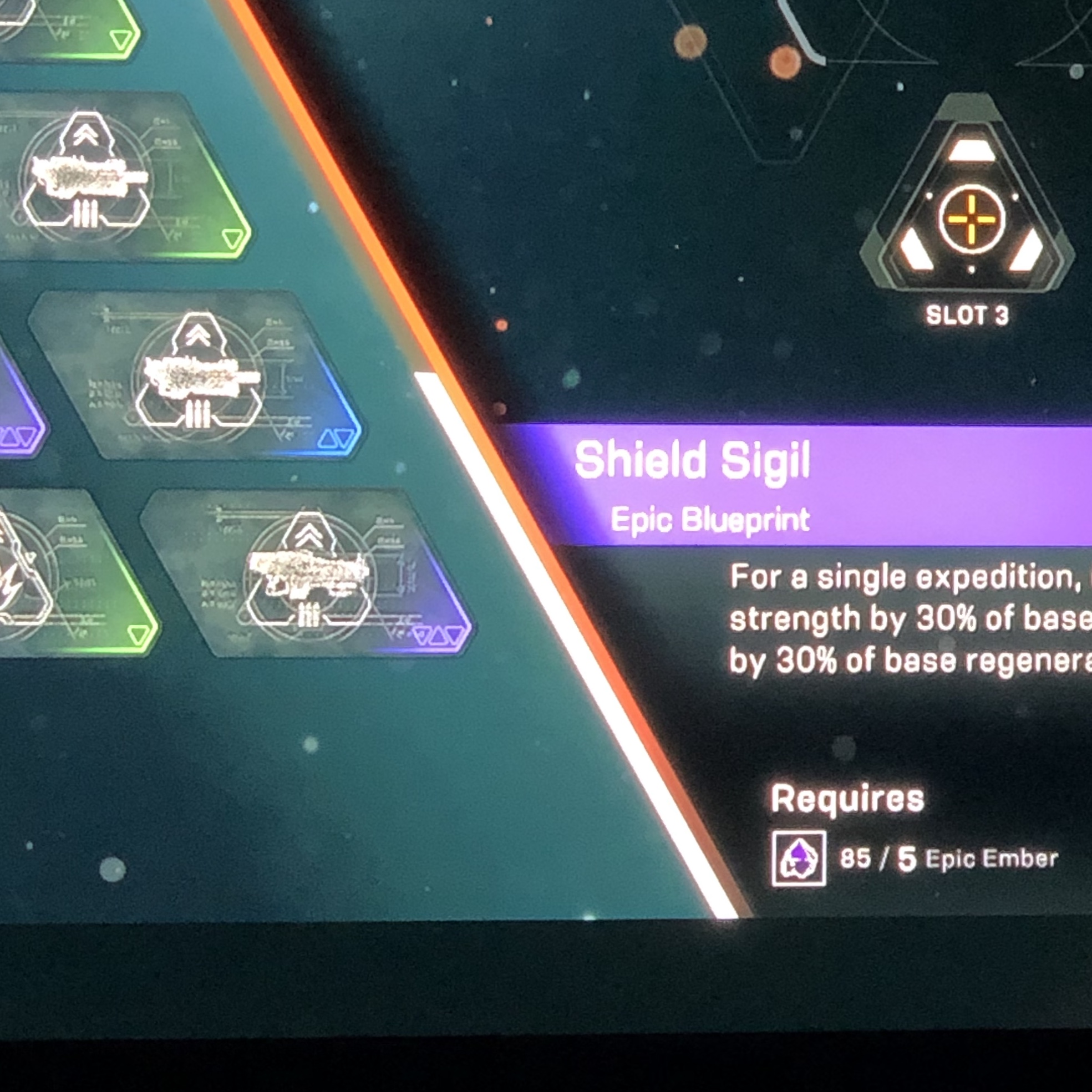 You don’t craft a “blue print” you craft a “Shield Sigil”. Blue print is the subtitle. You’re trying to argue semantics like you’re something special. The guys question was how to obtain rare “Shield Sigils”. The answer is Freelancer 2 but it’s bugged, end of story.

I... never use them. Well, I did twice. Once during the storyline Heart of Rage, because I was thinking it was going to be really tough. It wasn't, and I was in a Ranger*.

I used them a second time after unlocking GM3, because I was curious to see just how tough tough could be. Turns out it was tougher than that, and I took the express way back to the fort when, after emptying an entire autocannon into a tesler, I couldn't budge it's HP bar.

Since then I've learned a good bit, gotten even better, and yeah, I never use these.Spend most of my time doing Daily and Weekly challenges and collected MW gear. Even scored a Legendary Item in GM1 the other night.

Now with all my javelins in the 560-590 range, GM1 is getting to feel like Normal use to feel. May have to kick it up to GM2 pretty soon.

* Despite coming available at 2, 16, and 28, I did not bother unlocking any other javelins until I was level 30, post Heart of Rage. Turns out the Ranger is pretty much how I like to play anyways, though I've tried all the others, and each is its own sort of fun, the Ranger is the suit I fall back to most often, unless I'm actively trying to collect gear for one of the other ones.