NBA LIVE Mobile’s key goal is to help you build your dream team. Therefore, our 2019 resolution is to give you a program where you can earn the highest amount of high OVR players so far. Welcome to our New Years Resolutions campaign!

The campaign map is as follows:

You must complete the entire campaign with one Master in order to earn another. If you wish to accelerate the process, you may purchase Player and Token packs from the store.

Auction House: During the campaign, you may auction the gold and elite players as well as your 95 OVR Masters. After the campaign, you can auction your Masters (at any level) and you can Quick Sell any leftover Accolade tokens you may have.

Resolutions Bonuses: Bringing the NBA Closer than Ever

Earn Attribute Points for your Masters

As a special bonus, we thought it would be fun to follow how your Masters do in real life. We’ve given each Master a ”resolution:” if your Master meets certain criteria in his NBA games during January 9-16, he will receive attribute bonuses in NBA LIVE Mobile! For example, if Buddy Hield makes 10 3-pointers during January 9-16, he will gain 2 attribute points in his Mid Range and 2 attribute points in his Dunking. The amount of points your Master gets depends on how well the player does in real life. Check the back of the Master for criteria on what he can earn. 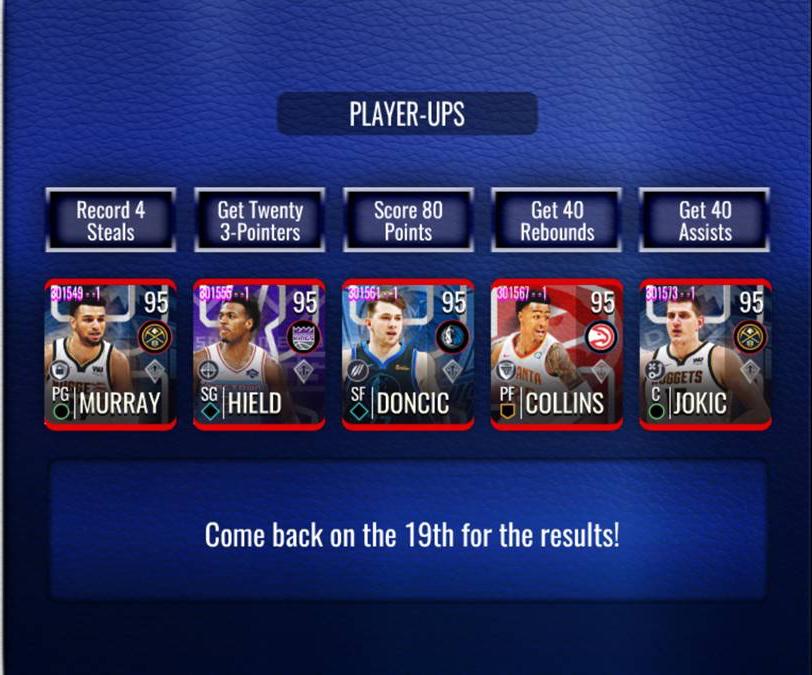 Added bonus: We will also be adding a +2 bench boost to the 92, 94 or 95 Masters. For instance, since Jamal Murray’s resolution is to get steals in real life, he will also motivate a starter to have +2 Steal when Murray sits on your bench.

While you are following along with your Masters in real life, why not also follow along with the NBA games themselves and choose who you think will win! There are special Live Events during this campaign that give you 1 Team Choice token for each win. Use 1 Team Choice token to choose who will win a game in real life: the underdog or the favorite. 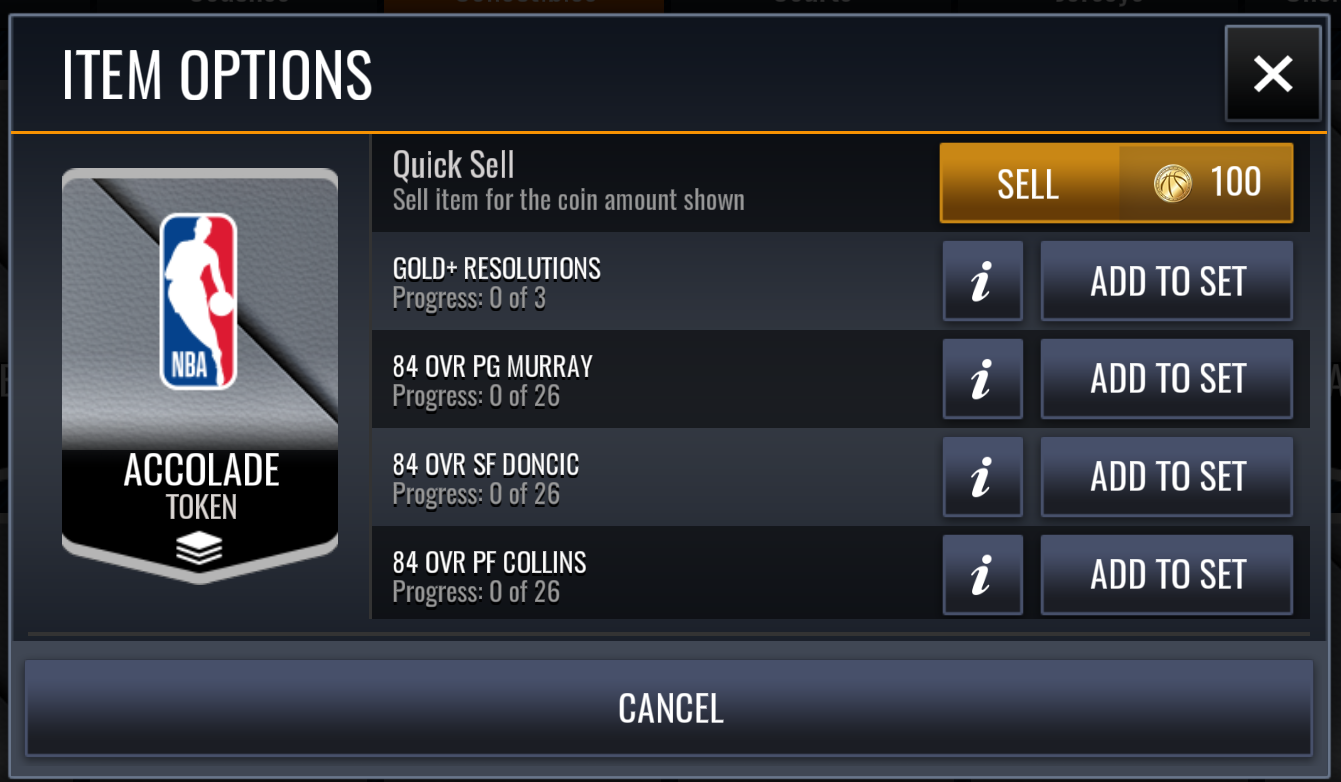 You can earn Accolade tokens as follows:

There will be a total of 6 NBA games:

These are the five Masters you can earn in New Years Resolutions campaign. Our dev team also provided descriptions on each player explaining why we chose them.

Murray has been a dynamic backcourt player for the surprise top team in the West and in just his third season in the league, the 'Blue Arrow' has established himself as one of the most explosive guards in the NBA. The 21-year-old is averaging career-highs in nearly every statistical category and the continued evolution of his game is integral to keeping the Nuggets atop the Western Conference in the New Year. 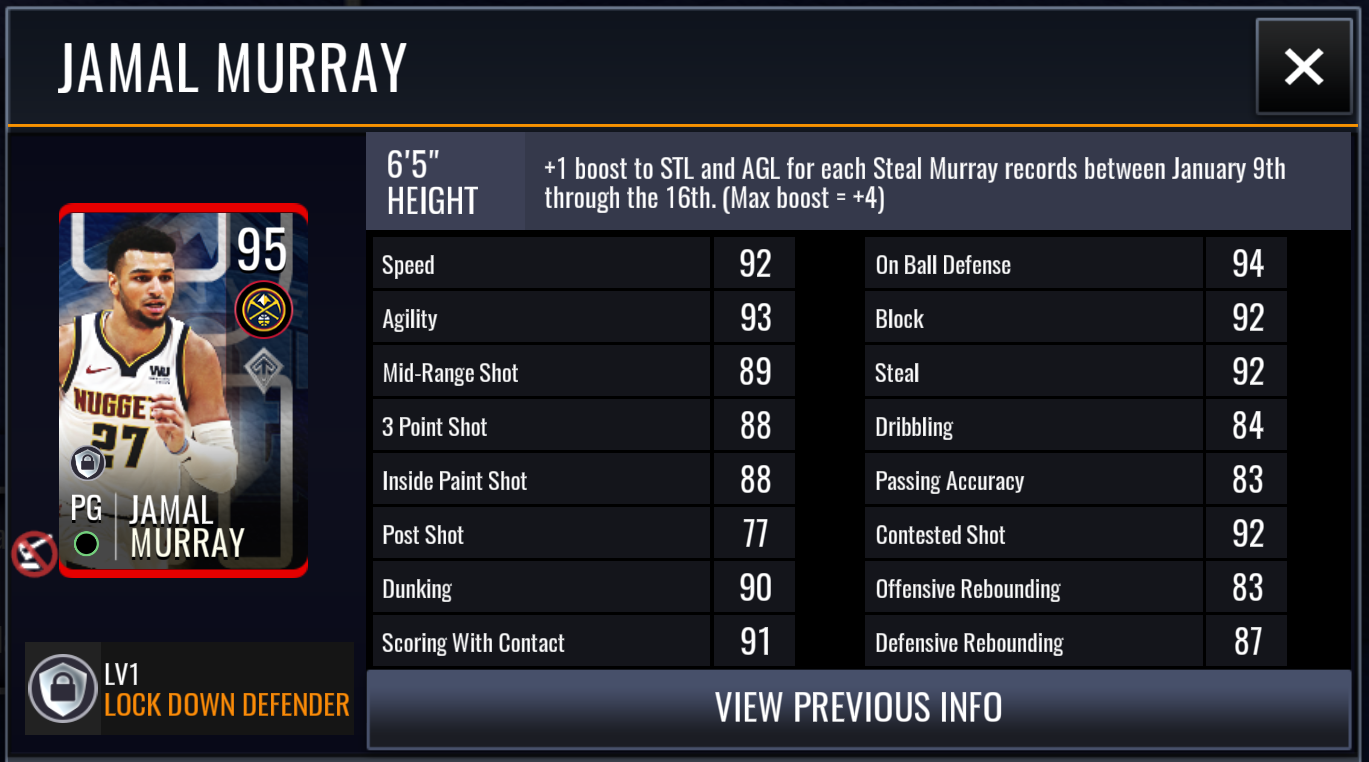 Considered undersized coming out of college, Buddy Hield has proven his game is larger than life for Sacramento in just his third season in the league. The Kings have proved to be one of the most efficient young teams in basketball and Hield has a lot to do with that. Shooting a blistering 42.9 percent from beyond the arc, Buddy Buckets leads the way in scoring for the potent Kings offense that is ranked 5th in the league in Points Per Game and 2nd in the league in Pace. On the edge of the Playoff hunt in the West, Hield is going to have to continue to light up the scoreboard to help Sacramento make the Playoffs for the first time since 2006. 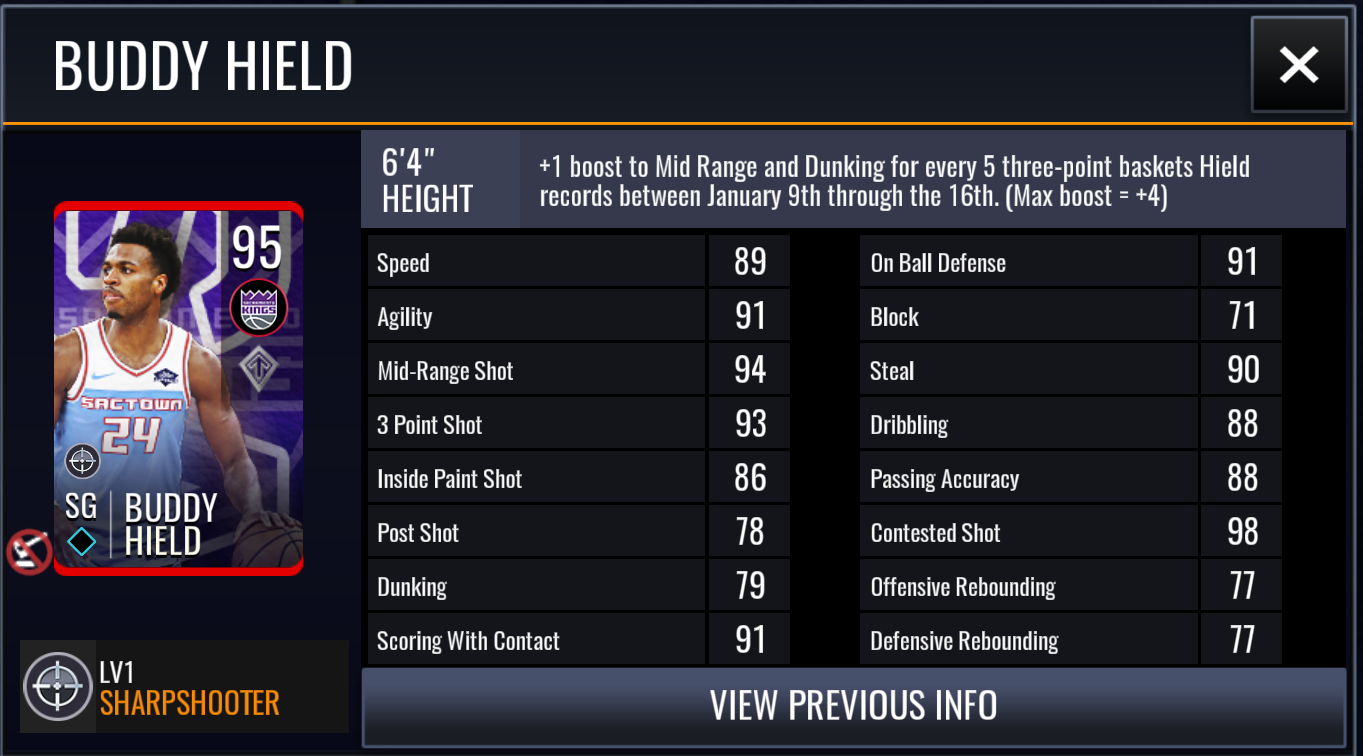 The de facto leader in the NBA Rookie of the Year race, Luka Doncic has lit the league on fire in his first season. ‘The Matador’ has proven to have a knack for coming up clutch when it counts for Dallas and is a perfect complement to the Mavs’ second-year starter Dennis Smith Jr. With Dallas on the cusp of the Playoffs in the West, Doncic will have to continue to grow into the multi-faceted threat that the Mavericks expect him to be. 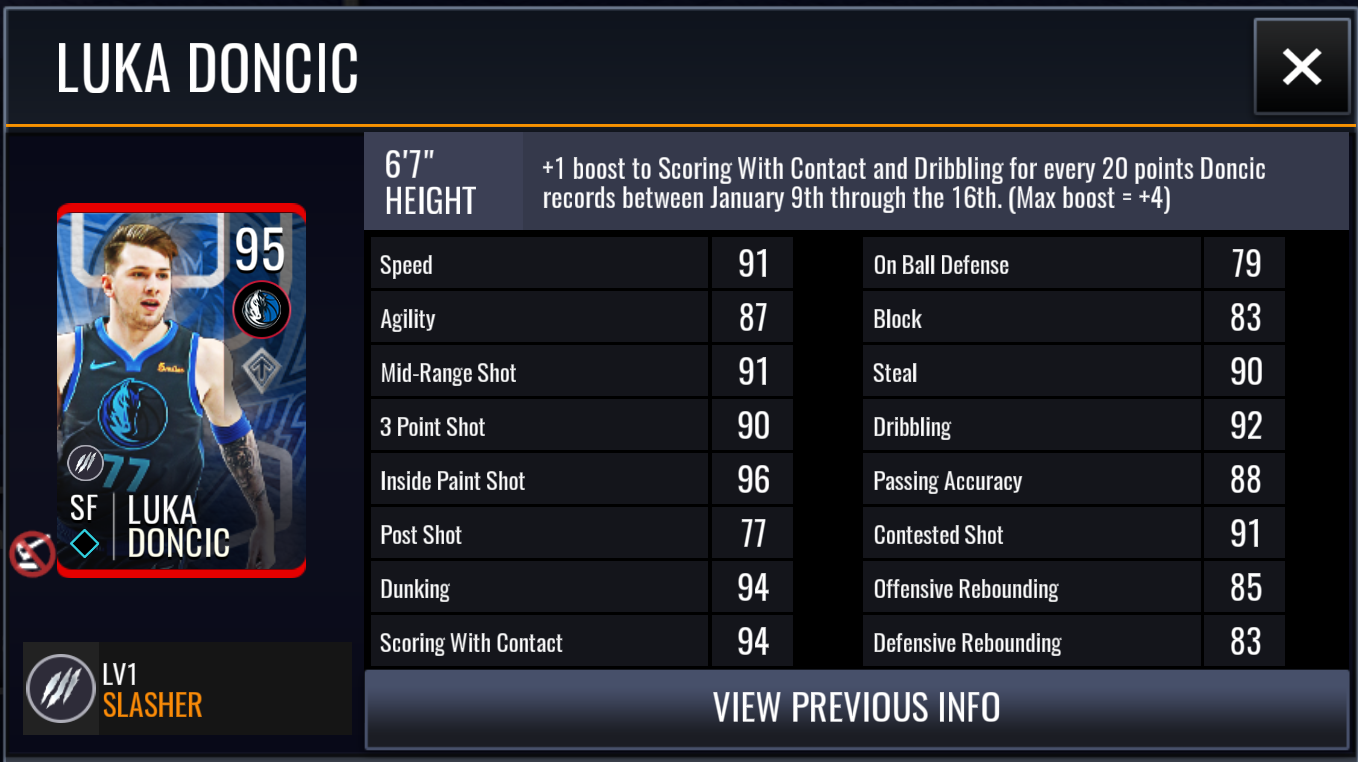 While the Hawks don’t have the same lofty aspirations as the other teams on this list, John Collins has Atlanta buzzing about what’s to come with their young core of players. Collins missed the first month of the season due to injury, but has bounced back in a big way, averaging a double-double of 18.8 points and 10.3 boards over his first 19 games this year. The second-year Big Man has also added a new weapon to his arsenal this year in the Three-Pointer. Collins has already made as many three-pointers this year as he made in all 74 games last year. If Collins continues to expand his range and his game, the Hawks have a lot to look forward to in the New Year. 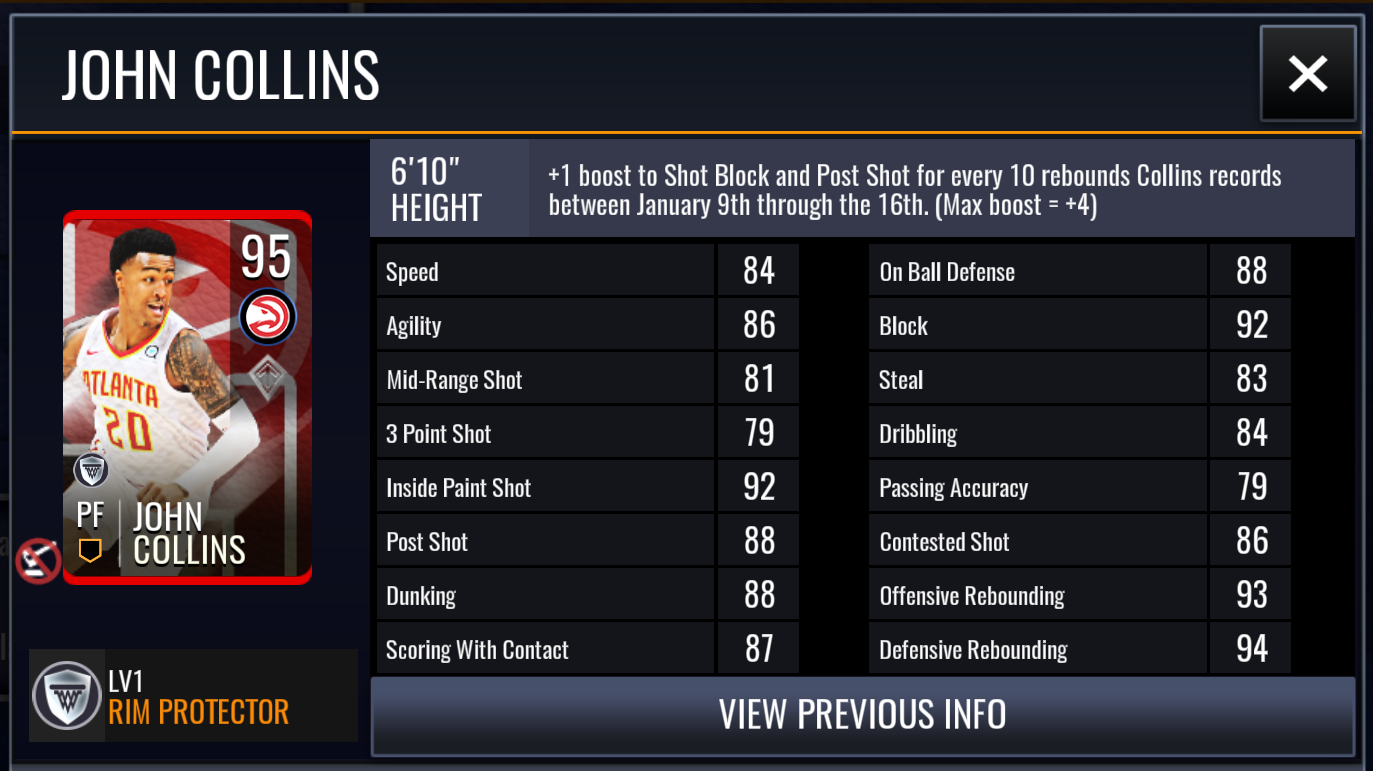 Jamal Murray is far from alone in the Mile High City, with MVP Candidate and fourth-year Center Nikola Jokic leading the way for the first-place Nuggets. Jokic was already a triple-double threat on a nightly basis last season, but now that All-Star production is converting to wins for Denver. Having clearly established themselves as one of the front-runners in the West, Jokic will be depended on heavily in the New Year to continue his team-leading production in assists and rebounds and prove that he is in fact the best true Center in the NBA. 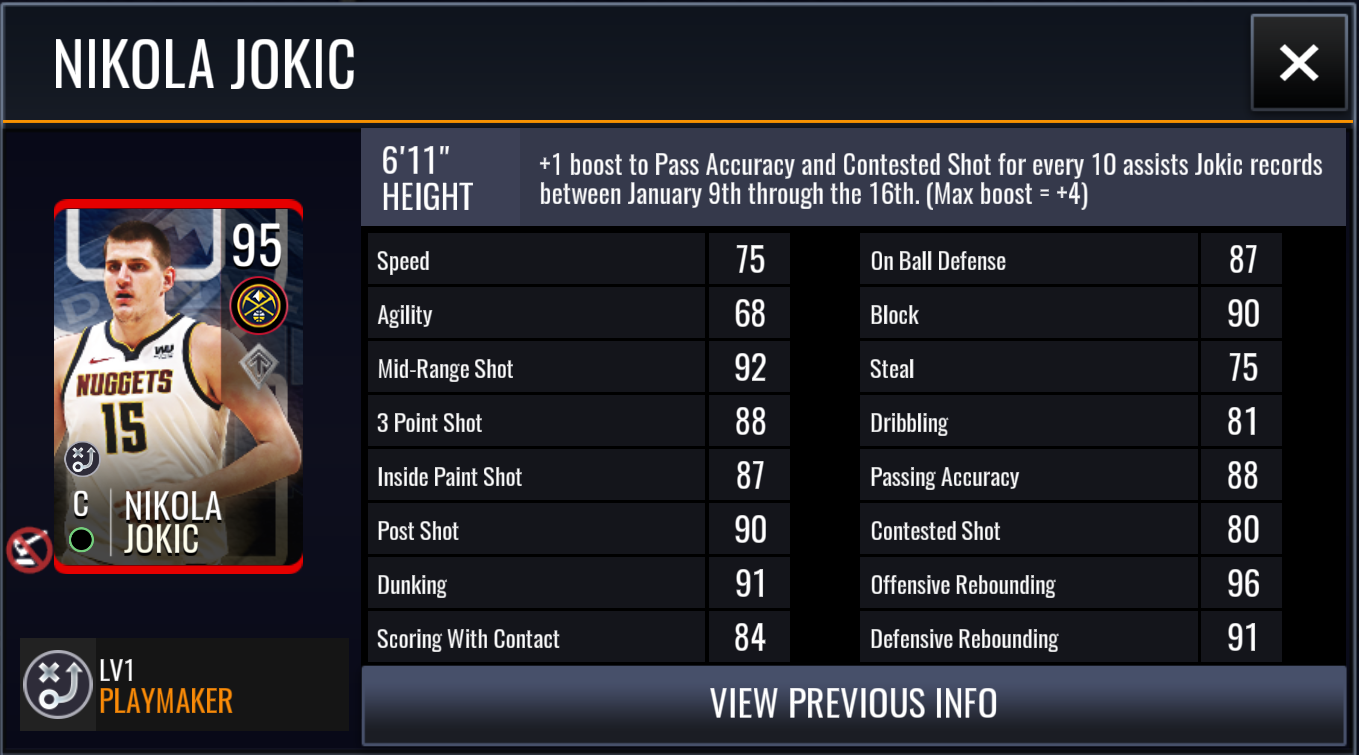 Thank you for checking out this post and playing our game! Happy New Year from all of us at NBA LIVE Mobile!