Best to worst = Left to right (e.g. the further to the left of the tier the better)

Wraith is obviously at the top of our tier list. The sprint animation change didn't move her down a rank, as her best strengths lie in her repositioning and flanking capability, which come from her phase and portals. An absolute must pick in this meta and without a doubt the best offensive character.

Gibraltar is also in Heirloom tier because he is a powerful combination of both defense and support. The Dome shield provides easy and quick revives and healing, the ADS shield is essentially extra health, the airstrike is probably his weakest ability but that does not take away any of its power.

Crypto might surprise some of you as he is an underrated character. In extremely competitive play knowing the location of the next safe circle is extremely advantageous, and Crypto does that safely and instantly. His drone can do respawning for him as well, he can see how many enemy squads are in your area, his EMP devastates Wattson and Caustic campers, just an overall solid character.

Wattson used to be a must-pick, and she still is, but her power (get it?) definitely became questionable with Crypto's EMP completely devastating her and the interceptors being put on a timer. Despite these nerfs she still can fortify positions for long periods of time however she just isn't as strong as she once was.

Bloodhound is obviously Respawn's favourite Legend. They are a literal beast of the hunt when they pop their ultimate; the speed boosts and extreme scans combined with very visible enemies and tracks is just unmatchable, as well as their ability to scan beacons. A skilled Bloodhound player will make it very clear that there is no hiding.

Caustic became strong and more used in Season 5 because now his gas doesn't slow his allies. The gas is absolutely devastating, the sight of a canister will make people hesitate, the ultimate, if used wisely, can force enemies to reposition into an area where they are much easier targets.

Ah, Pathfinder. Nothing but nerfs for the poor robot. After the season 5 nerf he was at least Legendary tier because of his ability to scan beacons, but now so can Crypto and Bloodhound! The only thing lifting him up at the moment is that his Grappling Hook is still the most mobile ability in the game, and his ziplines, though useful, are extremely situational. He definitely needs a new passive ability, maybe when he scans a survey beacon he sees nearby enemies through walls for 20s, and the grappling hook cooldown needs some more attention.

Lifeline is not weak at all. Her revives are the best, she provides good healing, her care package is a lot more useful now, but Gibraltar still does what she does better! Gibby is still a better pick than Lifeline if you need a support. To buff Lifeline a bit, consider nerfing Gibraltar's dome shield a tad or give her another rework. The ultimate would also do much better off with a rework as well.

When Mr. Edgelord came out, he couldn't walk the talk: his kit was garbage. But a series of buffs now make him the second strongest offensive character (third if you count BH as offensive). He literally silences characters like Gibby, Wraith, Octane, Pathfinder as he snatches their mobility and strengths. Revenant's death totem is a strong offensive maneuver, but his Passive Ability is still pretty weak. Increase the duration of Death Protection and increase his climbing speed + distance and he is on his way up to Legendary tier.

Rampart is like all new Legends when they come out: good but not great. Cover is vulnerable while deploying but once it is deployed it is quite useful. Passive is only good on the Devotion and Sheila seems like a fun thing to use in pubs rather than Ranked and it's so situational.

Bangalore has gotten the least love throughout the game's history. While putting her in Rare tier, you do have to keep in mind that Bangalore is not bad but she's nowhere near good as well. Her passive ability is insanely strong at strafing and pushing the enemy, but her other two abilities are still pretty lacking. The airstrike is not as good as Caustic's gas 'nade or Gibby's airstrike in terms of enemy repositioning as it's not that impactful. I suggest reworking her ultimate ability to maybe a minefield which would be incredible at holding chokepoints.

Octane is a tricky one. He can't exactly be reworked or buffed anymore without completely changing his playstyle to maybe a support who provides speed as well as uses it. Octane is not valuable to a team, he's a very selfish kinda character, and the stim provides insane speed but at the risk of visibility. You may be running from one team but you can alert another. The Jump pad is the worst means of team mobility in the game and is nowhere near as useful as a zipline or portal.

Mirage did get a rework, but he's still lackluster! The decoys are rarely effective against competent players, invisible revives, while great, isn't as strong of a revive as Lifeline's or Gibby's. You'd realistically want to revive behind cover rather than in front of an enemy's face. I don't really have any ideas to buff Mirage at the moment.

The worst Legend in this meta is definitely Loba. The tactical ability can get her along fairly big distances, but is slow, loud, extremely visible and not good at getting out of a sticky situation. Passive: rarely useful, the ultimate is cool but it can give away your position and it's not worth stealing a white armor at the cost of giving yourself away to an enemy. Most importantly, she is not the support she is supposed to be. A good buff would be to allow her to see healing items through walls, as well as the ability to move faster while waiting for a teleport and the ability to cancel the bracelet mid-air.

If you want to use the exact same template to make your own tier list, then visit https://tiermaker.com/create/apex-legends-season-6-legend-tier-list-476495 and feel free to send it here!

@CompleatBeetpssstttt.... dont put Crypto in Legendary, people will realize how great he is and Dev will then stop buffing him 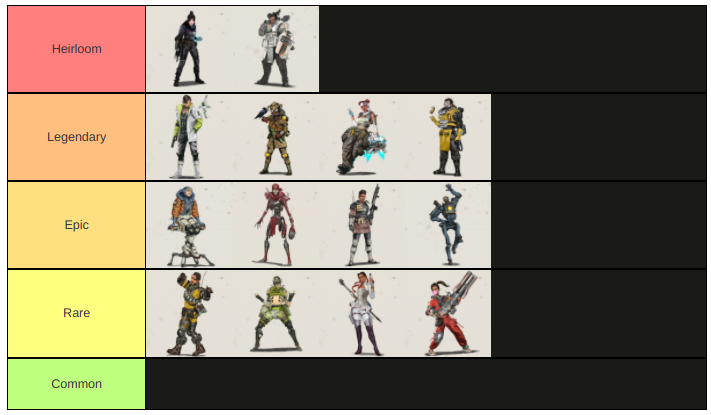 I am using a mix of Wraith, Bangalore, and Pathfinder this season 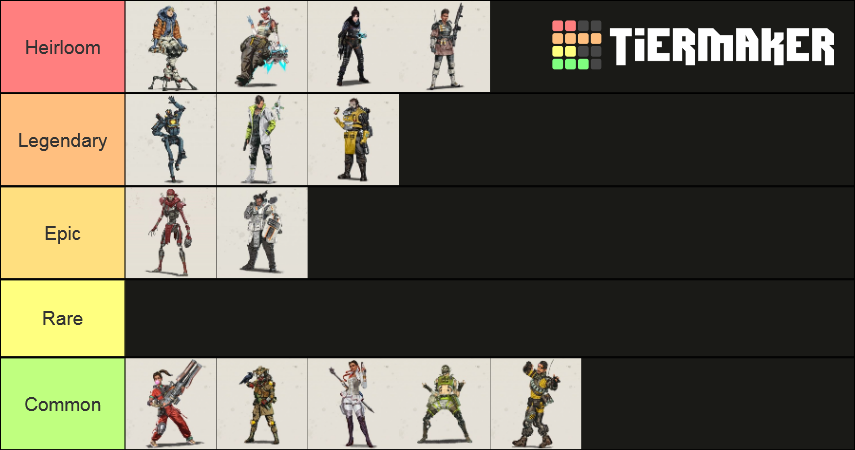 I want put caustic in f rank but not now :P

@Maxray_Blank Really, BH and Mirage at the bottom and Wattson / Bang at the top... were you drunk when doing this

@BaldWraithSimp I agree with a lot of your tier list! I personally don't think Bloodhound is worthy of the heirloom tier just yet, but that's just my opinion. I also think Mirage is a little more valuable than Loba, and Wattson higher than Caustic, but it is interesting to see other's views!