@sykrnazmnFrom the first moment that the "colours swatches" update was released and we started paying colours separately, I realized that something was breaking the game itself.
Obviously I don't think the purpose was to make players save some money. Of course not.

The aim of that update was probably to increase the quantity of objects to make events more more and more challenging and hard to complete, a real punch in the stomach.

I always hoped that everything one day could come back like it was before regarding colours. But this will probably never happen.

I posted a message on the Reddit TSM sub that feedback is being collected about this event, and redirected them to this thread. Some folks have come over here and posted, but not everyone has an EA AHQ account or is willing to create one. However, some folks still wish to be heard, so I volunteered to relay feedback if they specifically made that request in their comment. I hope this is okay. 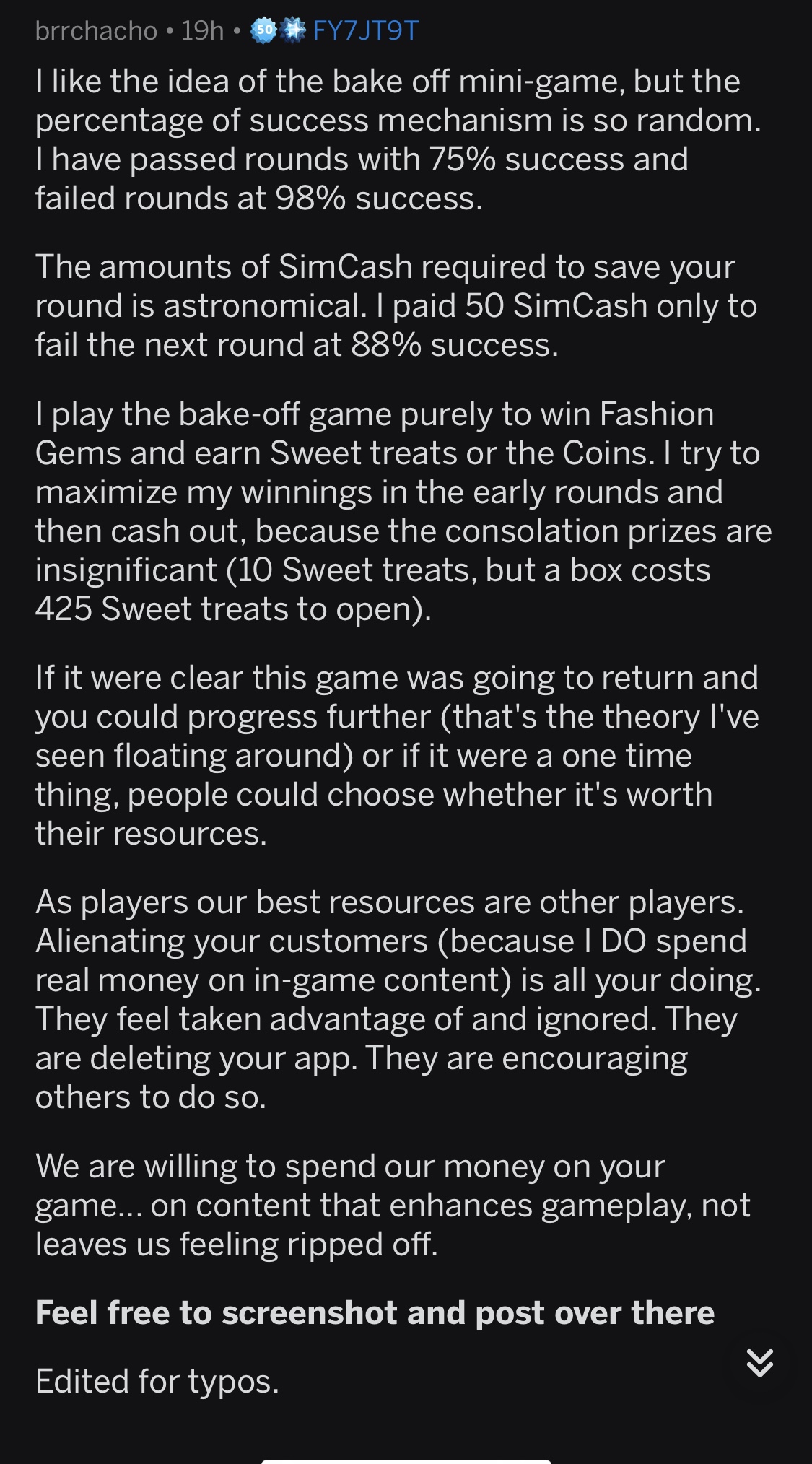 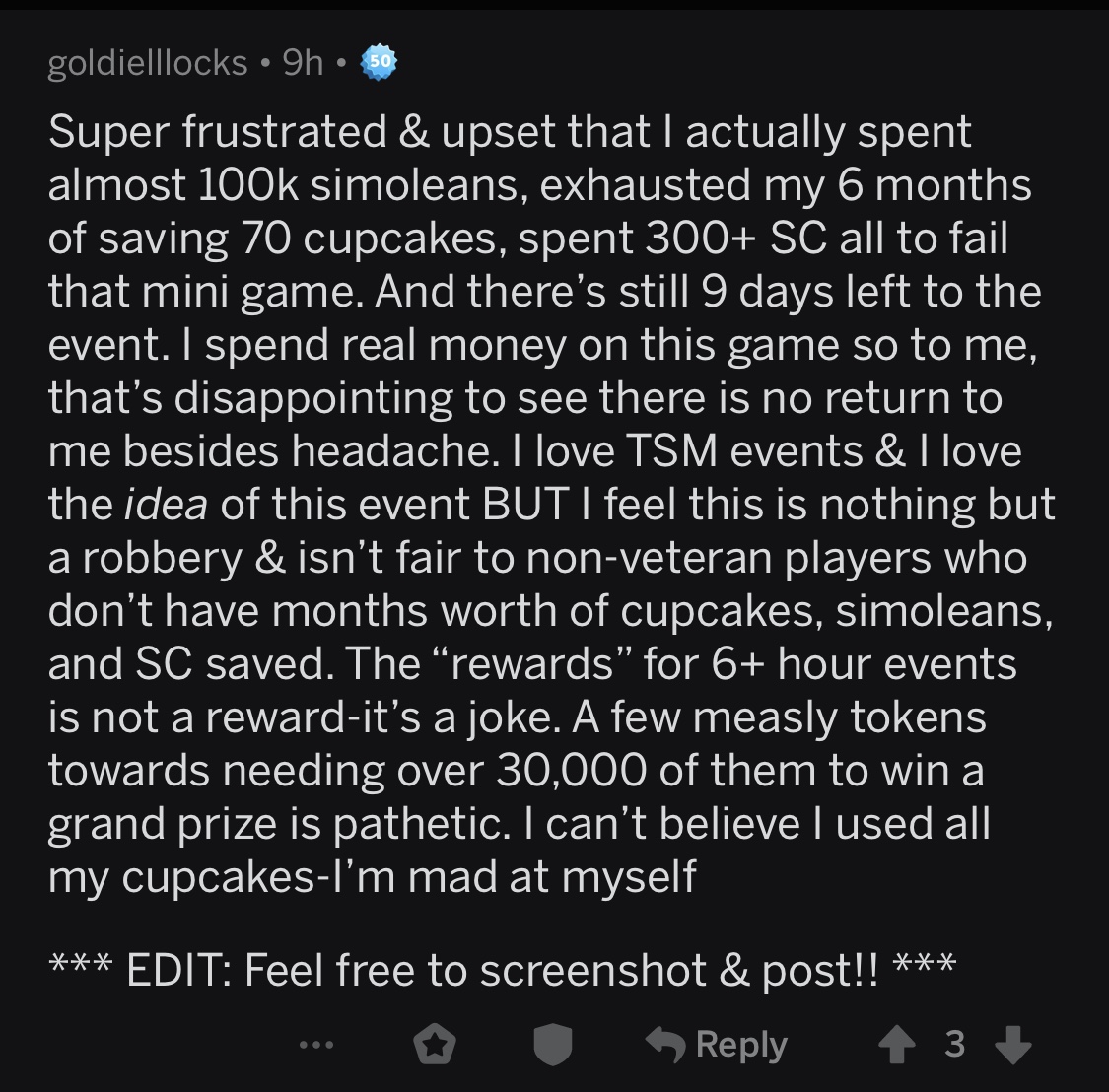 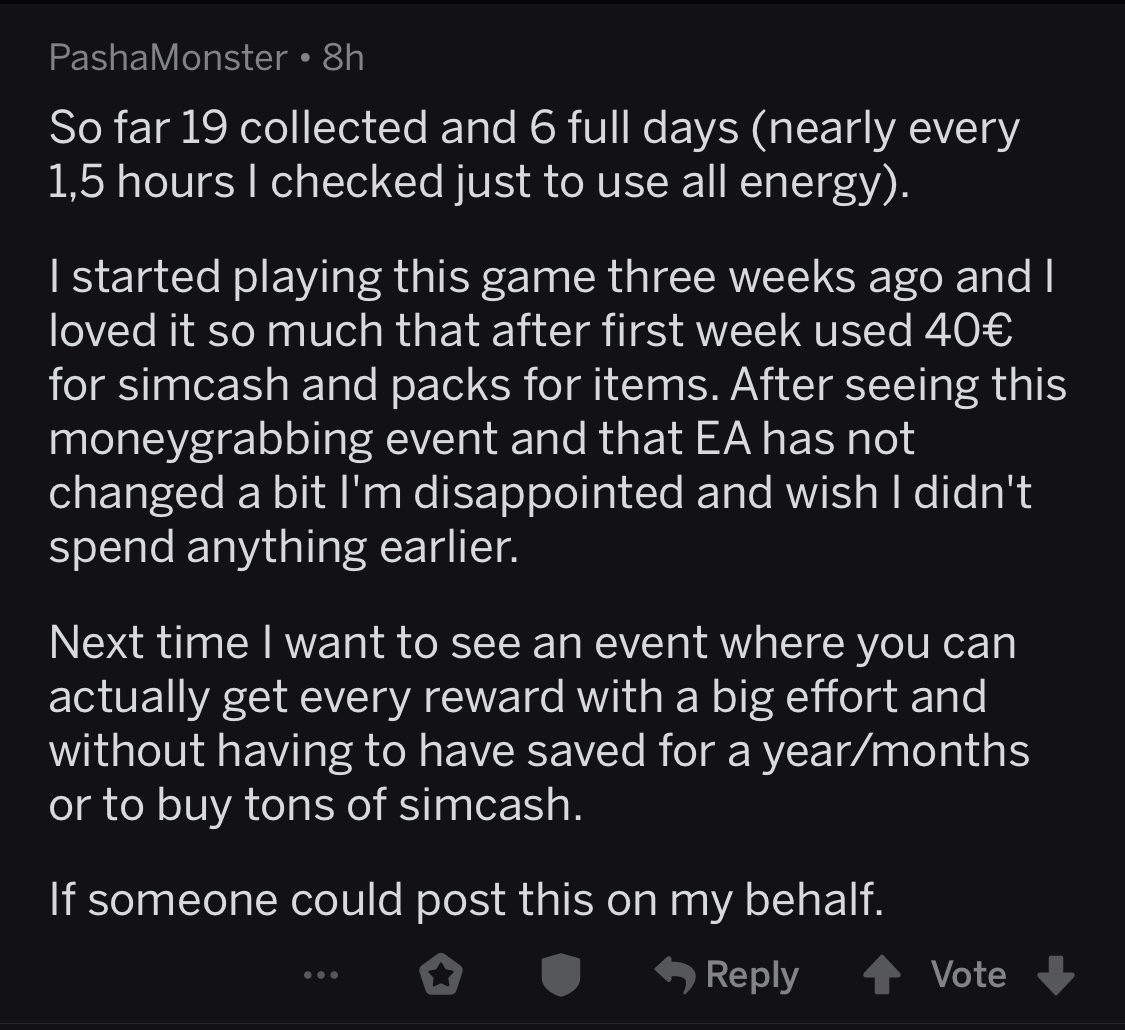 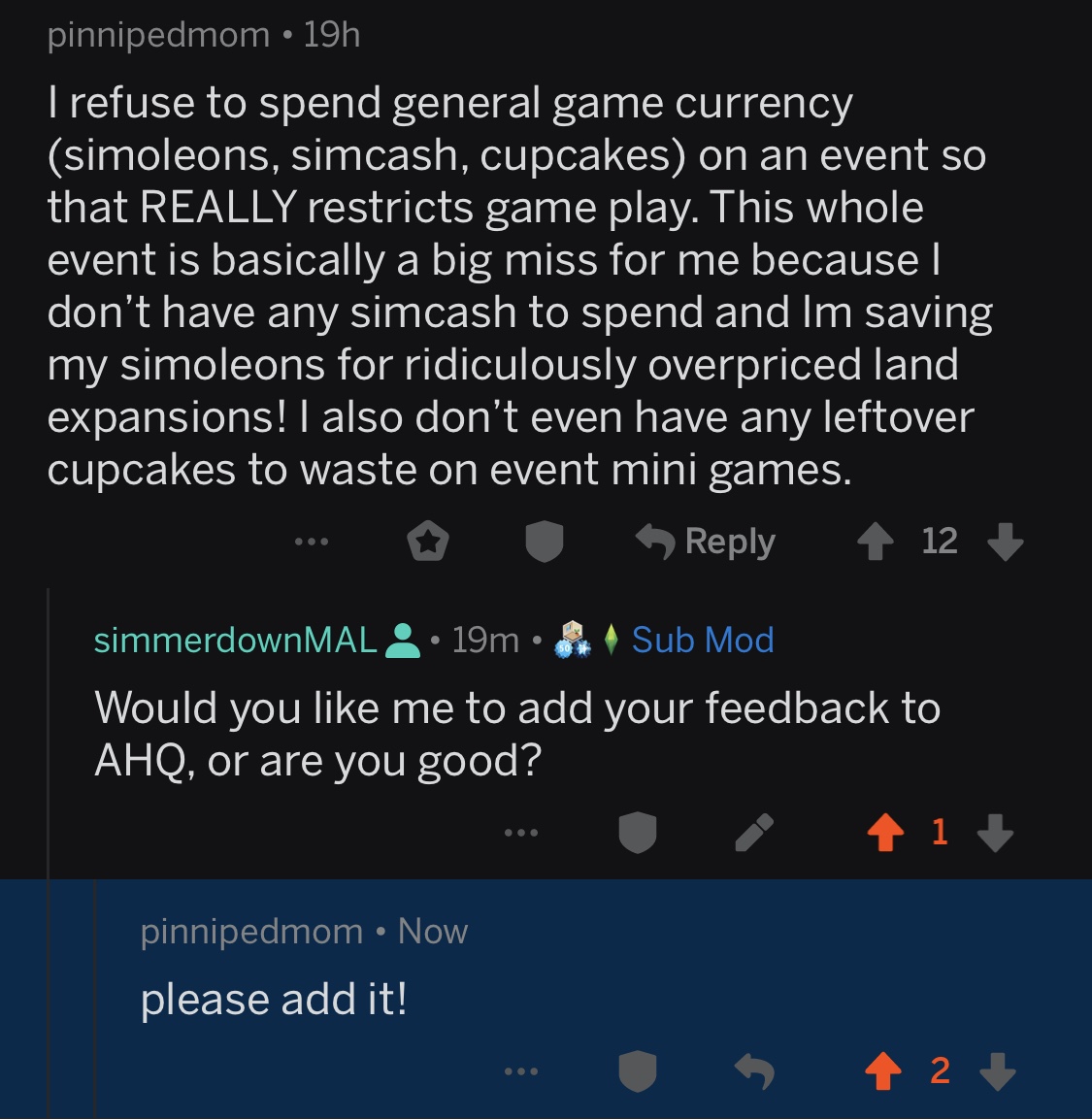 I liked this event, I used cupcakes and some cash and finished with 9 days left.

What I didn’t like was the jumping price to fix a failed baking attempt, it jumped to 150 simcash on a second use which is way too expensive of a leap. And I guess I was luckier than others as far as failed attempts happening. Only once did I fail in the 90’s.

I also didn’t like that the event ended when you got all items, it should have gone on and allowed for alternate prizes like past events.

I like the bake off idea, it's a fun challenge and super cute but I don't like the constant need for either cupcakes or simscash.

My biggest problem with this event is earning 30 cookies for a 6 hour event and then each box being 425 to open. The past ratio was awful at 125 tokens for the 6 hour event and 250 per box. This is utterly ridiculous. You have to use a cupcake for each special event because that's the only way the event is worth doing.

I do appreciate getting rid of duplicates. It's still rough to have completed 5 six hour events, spent 5 cupcakes, all to get one color of one item

Agreed! I am thinking to uninstall my sims mobile. The task is too expensive. Imagine 425 to open the gift whereas before it was only 250. And every 6 hours task we will be rewarded for only 30 and 60 for 12 hours? I prefer the weekly task before with Llama though it was pretty boring but the task was attainable.

first of all i want to say that this event is beautiful: the graphics and animations are something new and i really appreciate the hard work. the older style of quests and events were starting to be boring so i really wanted to point the positive.

some days ago i did the math and understood that i wasn’t going to finish this quest; just for a couple of boxes. at first i was sad, then i accepted it and i was almost ready to get over it but since yesterday i’m pretty disappointed. i’ve spent 70+ cupcakes and almost 400 SC and kept failing at the end of the last rounds even when i couldn’t spend more sugar and i had it there. yesterday one of your gurus posted on twitter that they fixed the problem of not being able to repeat some of the 2 sugar actions. i lost A LOT of rounds at 94%, 96%. had sugar but couldn’t use it.

so cool! you guys noticed the problem and fixed it; that’s amazing! but at the same time it’s fixed a week later. what about all the SC i spent to buy more sugar that i couldn’t use because of this situation? and all the cupcakes used to level as much as i could to up my %? i would appreciate if at least you gave us more days to finish it since you know that in your end there was a mistake.

just getting a “fixed” tweet isn’t good enough for me and probably for a lot of players that went through the same situation as i.

i mean: getting some SC and/or cupcakes as compensation would be great, but i don’t know if you’re going to do it. but at least you could try making this event a couple of days longer for us who lost those baking rounds but spent a lot to get as high as we could but the game was bugged and didn’t let us... for a whole week.

thanks for making this thread. i would love to see a solution.

“As we got further into the event, we also got stuck in a bug where the task based challenge at the park became a timed event with stars above it. The time clock showed 0s and the only way to get out of it was to pay 30 cash. They got us coming and going. Will not be participating in such a costly event ever again”

This! I’ve been stuck in this bug for more than 12 hours now, I’ve tried everything but nothing works.

Well i am tired of explaining....Change it and  pls do it not again EA..

You will loose players...and a looooooooot of money....

this game could die..if it will be now in more or every coming event...

Alright, here we go... I'll be repeating a lot of what has already been said but I feel like it's worth hearing from as many people as possible. I should preface this by saying I am a paying player. I have no problem shelling out for packs with items I like. But this event is a whole other level.

Summary: The Bad much outweighs the Good. The prizes are not attainable without spending a ton out of pocket or spending through months and months of savings. Or both. The whole thing feels like a real slap in the face after so long waiting and hoping for something new. If this is how events are gonna run from now on I would expect a drastic decline of players. It's not feasible or sustainable to be running quests like this.