The now level 16 account has had two LlamaZooms, with rewards being one llama ticket and XP set at 18 XP for the first and 48 XP for the second. Clearly the rewarded XP matches the level of difficulty of the tasks assigned.

It’s a little eye opening playing the game again with fresh eyes with a new account. I forgot so much. Is that what you’re doing too?

FYI: step 13 of the photography career quest is also a lllamazoom on my now level 17 account, instead of four long hangouts.

Thanks @simmerdownMAL I just finished those long hangouts on my accounts. Added the information on the LZ.

I just hope that the people that didn't get the photography quest will be able to use your walkthrough (fingers crossed for next quest) @Phantomlover1717 . You and @simmerdownMAL  are working hard for us and I want you guys to know that we appreciate it. 😍

Although I did buy this one on day two after missing  llama completetion twice. But was still making efforts to get the extra rewards for quest's

I saw on Twitter that you were unable to finish step 17 of the photography quest on your new alt account. I agree, completing SIX long shifts is unrealistic for a new account. Especially for the following reasons:

My alt account was a little higher than yours, so I had a few LlamaZooms on steps, including step 17. I’d argue that my LZ step with a few quick shifts was a heck of a lot easier than your step 17 with six long events. Plus, it was fortuitous that it aligned with a LZ for the dance career too.

A friend of mine suggested that I spend $10 USD on my alt account to get a 3rd and 4th sim, and then never spend money on it again. Reluctantly, I agreed to do this, and believe it’s the only reason why I’m able to complete the photography career quest. It is very clear to me that completing the photography quest on a level 6-14 account is impossible for anyone without 4 sims.

I love TSM and have been a daily player since launch day, but I’d like to respectfully discourage any new player from spending their time completing the photography quest, unless they are willing to spend money upfront for a 3rd and 4th sim. I believe that the demands placed on new players for this quest were unrealistic and cash-grabby. I’m pretty disappointed and hope they scale future quests back to be more manageable for new players... since THAT was their target audience for the photography quest. 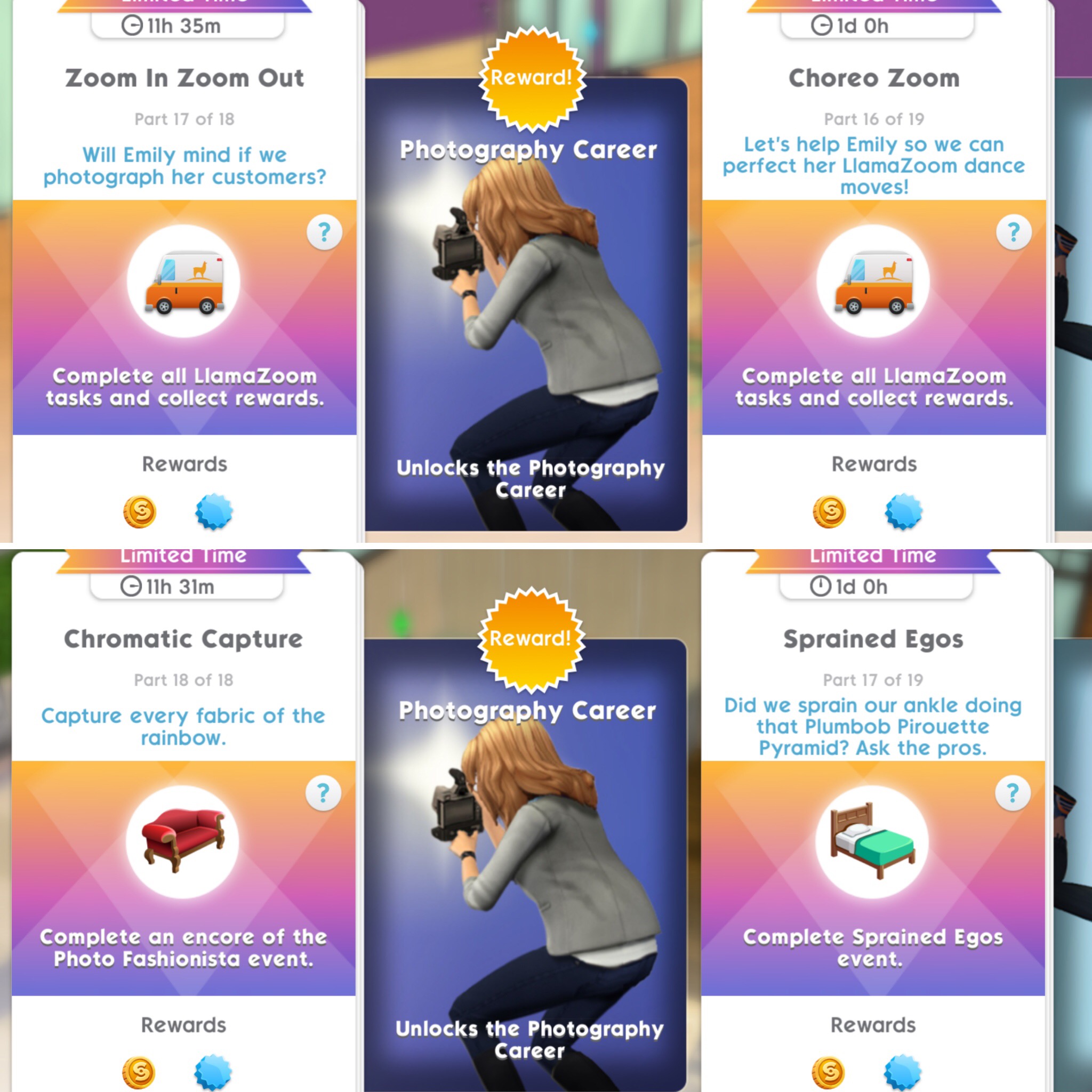 I don't really have much more to add than what you wrote @simmerdownMAL. This step at the end is kinda eh, backstabbing.
People that got to finish this quest without buying Simcash probably didn't sleep much. 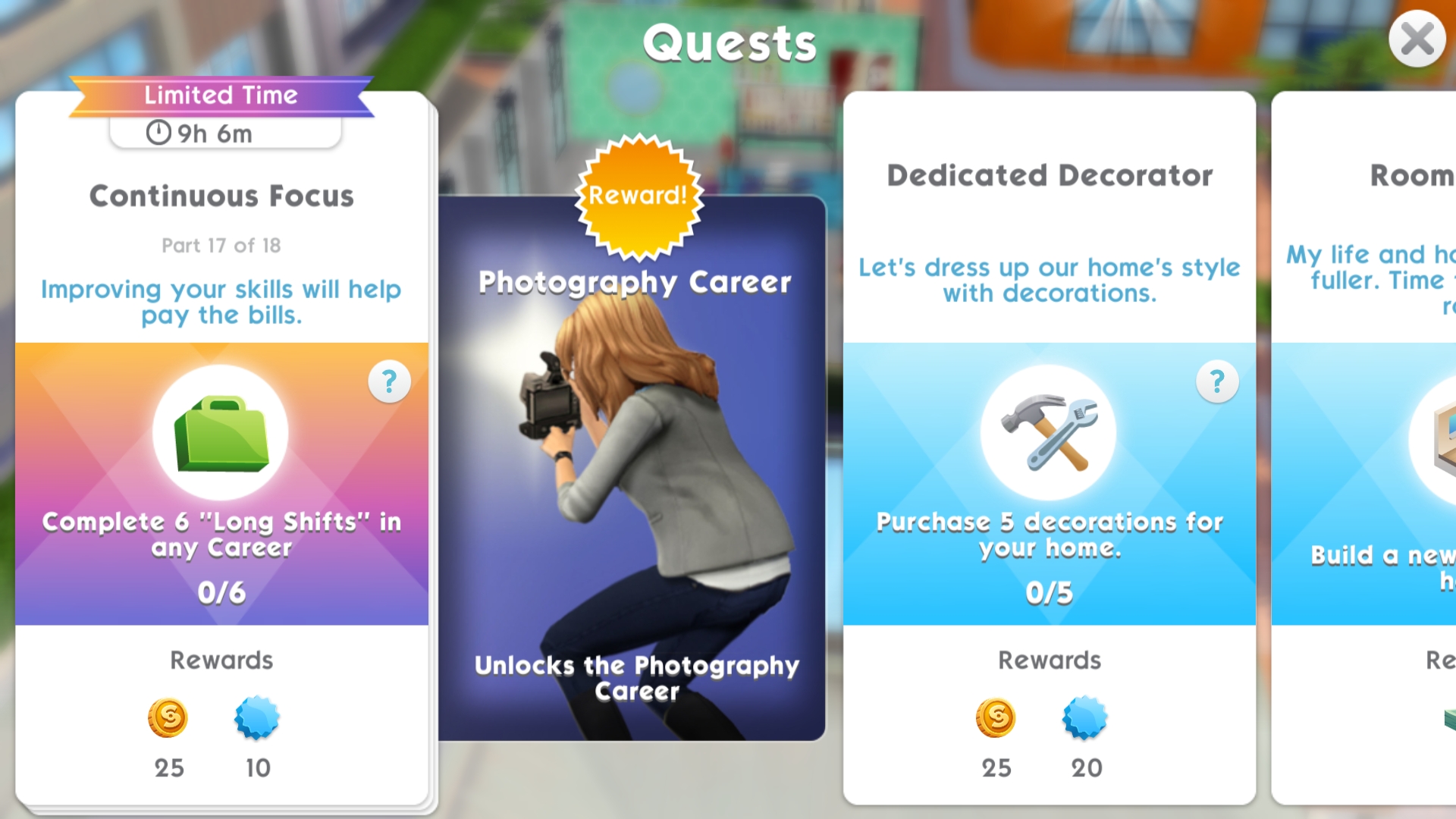 I want to thank the devs for such a great game, but I just want to say things like this really ruin the experience. I would say this and Izzy’s shop giving me clothes on retry with the same trait 3 times in a row were the most infuriating experiences I had in game.

i grinded for this achievement for 3 #@$#&#* days to find the last step to be a time gated event that’s basically impossible to finish without spending simcash... I finished the Sequined Dreams part 1 with a bit over an hour to finish and I was ready to spend cupcakes to get that last event, only to find that it will only let me do the quest again 3 hours from now 😡

I totally agree @CranSnap. I’m in the same boat. I realized after my last post that the last step in the dance quest, a double event separated by a 4 hour downtime, will prevent me from completing it.

I’ve talked to several players about this on Discord. Many have expressed that completing events with this setup require little sleep and constant attention — it feels more like a part time job than a game. That’s no fun.

The only recent quest that I felt was very manageable, fun, with a generous amount of time to complete was the Growing Gardens one. I know that was a live event, rather than a weekend quest, but it was nicely paced with no double LlamaZooms and no double 8-hour events.

Quests, like the Photography one and the Athletic/Athletic Advanced, are very discouraging for players. It is far more rewarding to play and complete a realistic quest that unlocks items or careers. That’s what keeps me playing. But if I found a game, and especially a mobile game, too difficult and grinding, then I’d spend my time elsewhere.

Mobile games should be designed for people on the go, where they can complete steps while commuting, or sitting in a doctor’s office lobby, or while locked in a bathroom and hiding from your kids for a few moments of solace. Whatever they have going on here with the recent weekend’s quest expectations is not that. I hope they’ll revisit these quests and remove all steps that require a double LlamaZoom or a double 8-hour event that has a 4-hour cool down.

In reality all games are like this sure it's free but the throw in impossible time quest's to one keep you constantly baby sitting it. Or two push you to spend money. It's kinda any free games push is to get you to spend cash because they did offer for you to purchase the dance quest for 19.99 and got all the clothes from the second quest. On top of that they offered the photography one for life tokens which if you didn't have enough you had to purchase those. But that's how they keep the game free is giving you things you really want  but don't give you enough time to get them so you spend money or become a game zombie 😂 which most of us have lives and family's and can't spend 24 hours glued to a phone to do quest's it may be on a mobile but our entire existence isn't attached to a phone. Now I did buy both and still tried to complete the mission which I won't be able to thanks to the last two tasks of double llama and the double quest's with time limit in between and won't spend more to complete the quests on one I already own.