Throws a special grenade that creates a small vortex pulling players toward it before exploding.

Lay down a pad (similar to jump pads) that causes enemy to float with there current momentum at - 25% speed or increases gravity in a 5M radius slowing enemies by 30%.

Short Bio: His parents where frontier researchers so he grew up on alot of space stations and became fascinated by the artificial gravity systems. He hopes to use his prize to create a frontier think tank to further his research and prevent more children from constantly being moved around.

How I see him 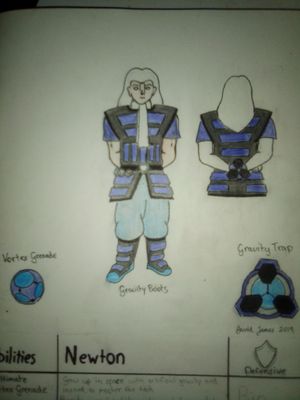 Love the double jumps in Anthem if you're picturing it like that. Have you ever used the Gravity Star in Titanfall?

Never actually played any Titanfall or Anthem. Just looked up a bit of lore