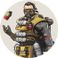 hey there people. Wanted to try and wade in on the topic of new Legend ideas. I feel like i should say at the outset:
1- i've played a little bit of Apex, regs  but 0 Ranked. I recognize my limited perspective, so i understand i may be in line for criticism lol.
2- hopefully i'm not missing any in-game mechanics that would make the legend impossible. Apologies if i miss the mark there.

3- I'm leaving out the legend's backstory for this post.

4- my goal is to create something that promotes a mobile healing / fighting playstyle. I'm not trying to side-line lifeline with this legend. If i'm goofing the execution, i apologize, and welcome comments.

without further adieu, the Legend idea

PASSIVE:    "sharing is caring"  ----------> sharing good techniques with teammates for meds allows everyone on Sawbones' team to:

TACTICAL:     "heal dart"   --------> a dart that must be manually aimed by holding tactical keybind ( like fuse's knuckle cluster ) Dart is sticky, so if it hits a surface  it sticks, or if it hits an ENEMY player, the heal will benefit them.

- Reduces incoming damage by 30% for a 10 second duration

Sawbones Ultimate seems handy, but too handy, maybe reduced incoming damage by 15% instead of 30%

And his Tactical should heal the same amount as you said, but reduced to half as much when both darts are out to even the OP healing.

Other then that, I think this Legend sounds awesome and would have great rivalry-like dialogue with Lifeline.

@theUHellion not a bad idea im all for more support characters. also you have to start some where and our player base tends to go through and try assist if you may have forgotten an idea or two. anyway this guy is kinda suffering from something i call over stacked and understacked. it basically means you overstacked one part of his kit but made another incredibly weak. ok i kinda feel like the passive could be to strong or over shadowed by things like medkits and phonix kit. because these can full heal you -shields the only thing i see being of majour use is the speed the heal is used at. however if your trying to make syringes stronger for a team by say makeing them as powerful as a med kit thats where i feel it could be to strong. ok the heal dart sounds great and then i read it heals the enemy team to. that sounds like a good and fun gameplay to me but for others it could be infuriating as they would easily be pressured away from it (assumeing it works like a pulse) i feel it may need some tinkering to fully fix it and make it viable otherwise i like the ability. also what would become of lifeline. i dont like the ult personally i dont think it suits the character as he is more of healer then a tank so personally i think the sheilds a bust. if you could however maybe think about possibly useing his health in some way or maybe doing something unique like anti healing i think you have a seller on this character
Message 3 of 9 (643 Views)
Reply
0

@Ghost420Spirit currently doing a re-work of my original. If you like, pls take a look and tell me what you think!
Message 5 of 9 (449 Views)
Reply
0

Re-work of the original idea #1

I don't think i mentioned in the original, but I hope i won't side-line Lifeline because:

- the kit of this legend differs alot from Lifeline. No AOE heal, no gear drops, no drone revive.

All these things that Lifeline does seem really handy, so I think Sawbone's proposed kit shouldn't push that out of the way.

I've ( hopefully ) enclosed a PDF to look at if you'd like. But haven't posted on a forum in ages, so i may have goofed. if i have, i apologize.

Or, you may slog thru my altered list here.

PASSIVE:    "sharing is caring"  ----------> sharing good techniques with teammates for meds allows everyone on Sawbones' team to:

- use syringes 0.5 sec faster, and have a 60% bonus health received

( I would honestly be ok with some light level seeking ability for the dart, I just don’t know if it’s feasible in the game’s engine. So I've left it out. )

ULTIMATE (idea 1 ):        into the fray! -----------> when activated, an implied drone stuck on the players + teammates deploys a quick heal on all teammates, instantly healing some health, and negating the usual slow effect of being shot for 15 seconds.

A 2-step ultimate. Activating keybind 1st time  “gives” sawbones the banners of teammates. A mobile respawn beacon built into sawbones is made active for use. ( no inventory slot used )

On activation, an AOE occurs. Modified heal drones will disperse, and on enemy screens, little cancerous drones will appear on their HUDs (somewhat out of the way, just enough to be noticed, but not blocking most battlefield vision ) to indicate that their heal items have been sabotaged. The effect goes on for a prolonged duration.

Any heal done in the “sabotaged” window does NOT reward the normal amount of healing after the ultimate’s time wears off. It’s just a crappy heal item during that time.

@theUHellion the new idea is pretty good youve tried to work on the things we mentioned ages ago but i do feel it is still suffering but just a little. ok so the passive is a little boosted then last time. im not its biggest fan but it could work. for that heal dart tac i kind of like the scrapped homeing idea they can do it but it sounds awesome. id also like to expand off of it and use something i had a problem with last time. allow it to hit enemies but instead of healing it could sabotage their meds which means it could be used as an execute ability over a damage ability being used against them after you deal a severe amount of damage with the added bonus of being able to heal your team. (i feel that should be his whole shtick damage enemies with their heals.) as for the ult i like 1 and 3. 3 is why i thought of the add on for the tac as it sounds awesome id go with it however i also like 1 because i see it as an ult that could work off of the rarity of your backpack for some reason it could have increased effects from the color
Message 7 of 9 (440 Views)
Reply
1

@House-of-crimson" allow it to hit enemies but instead of healing it could sabotage their meds "
------------ I hadn't considered this as a use. I have to say, I like it. feels like a nasty surprise if it hit an enemy.

Could i ask, what would you think would be a better passive? I was hoping to find a nice spot for the boosted heals ( but not OP pushing out medkits, but useful enough to warrent choosing, since a better heal would allow the team to have less 'down time' while ducking and healing )

@theUHellion im personally not a fan of the heal boost in general mainly because you have better options however i did read above and thought you meant something else. by that i mean when he heals it has a bonus health up to an extra 25% which would let him and the team take a bit more of a beating. you could also maybe go another path. maybe you could reduce the bullet stun when takeing health damage.
Message 9 of 9 (416 Views)
Reply
0
New topic
Twitter Stream