Product: The Sims 4
Platform:Microsoft XBOX One
Which language are you playing the game in? English
How often does the bug occur? Every time (100%)
What is your current game version number? FP01: 1.assets.live-fp01.92
What expansions, game packs, and stuff packs do you have installed? Disregarding Spellcaster as ts not on console yet. All EPs but Get Togerther. All GPs but Parenthood, Spa Day, and Outdoor Retreat. SPs Spooky Stuff and Cool Kitchen Stuff. Both Free Stuff.
Steps: How can we find the bug ourselves? Two bugs in one. First: Be a mermaid and call dolphin before achieving Soulmate status with a spouse and the aspiration. No interactions needed. The dolphins are being auto assigned as soulmates at the moment of being called. Second: Be mermaids, don’t call a dolphin until married and soulmates, then try calling a dolphin.
What happens when the bug occurs? First: The married couple are locked out of achieving soulmate status. Second: A phantom dolphin (invisible, and does not appear under relationships) appears. You can see it’s effect in water and hear it, but is all. No interaction beyond auto interaction between it and the sim is possible.
What do you expect to see? That dolphins don’t hijack the soulmate status and don’t disappear from game when they can’t be your soulmate.
Have you installed any customization with the game, e.g. Custom Content or Mods? On console - never used.
Did this issue appear after a specific patch or change you made to your system? Neutral/Not Sure

There is still the occasional bff and soulmate glitch that happens every now and then. (Which you can say is fixed all you want but it’s still not at least for Xbox one.) However, out of five tries with a new made couple each time it’s the same thing. The moment I call a dolphin it’s assigned as a soulmate to the sim who called it. Out of a sixth, I waited till I got the couple to soulmates and completed the aspiration. Then when I tried calling a dolphin, and got “Flisper” the friendly invisible dolphin.

That mermaids and dolphins become soulmates directly is by design, but it’s certainly not supposed to work like this.

Not quite sure what you mean by "hijack" soulmate status. It's not exclusive - your sims can have more than one soulmate level relationship at the same time. My romance sims have several soulmates all active.

I haven't played with a mermaid and dolphin yet, but even if the dolphin is a soulmate, it shouldn't stop the husband being one too. Also... why is the husband not already a soulmate before marrying them? My sims usually reach soulmate before they even get engaged (because soulmate happens when both friend and romance bar are maxed).

Can now add the Realm of Magic to the installed games packs.

Exactly as it means simvasion. To take control and divert from original/intended path. It was meant to explain what was taking place, as well as a pun (obviously only funny to those who get the old timey reference).

We’ve had the game for a year now and no one on any of the save files have ever gotten more than one soulmate status with another sim. On top of that, once reached it stays even if you have your sim break their heart.

(And before someone asks without realizing the platform says Xbox.. Yes, the game is updated. Xbox will not allow you to play any game if there is an update available for it and all updates for it are installed.)

Because not everyone plays the same way? The soulmate status is buggy at best. Even with two sims pre-created as married, if the two sims reach Soulmate status before the “married to BFF” the Soulmate aspiration does not count the two as BFFs. So we aim to not reach soulmate till after that part. And que in the “once reached it stays.” That includes if one of the sims die. 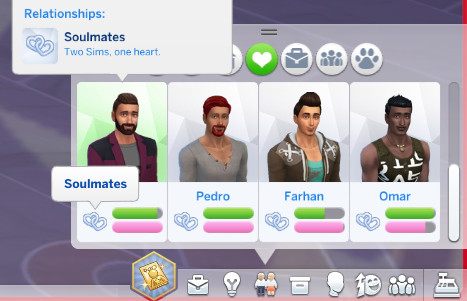 My sim has four soulmates, which is the top romance status you achieve if you fill both the friendship and romance bars. It can go through various pre-stages depending on the levels of the bars - if you have low friendship but some romance, it gives you the status "Romantic Interest" and then this gets replaced by something else if you continue raising the levels of the bars, for example "Lovebirds" if you have good friend ship and romance bars at the same time.

BFF is best friend status, which you can only have one at a time. You have to ask a sim to become your best friend using the option under Friendly socials, but this is only available at extreme high level friendship bar (maybe 90-95% full?). It's not something that automatically gets assigned. I've had sims get married and then have to temporarily switch their best friends to each other just to complete that step of the Soulmate Aspiration (usually they have other best friends).

I haven't experienced any bugginess with these.

@Omosky Tagging again to see if there's a mixup here between BFF and soulmates maybe ?

Again, multiple soulmates do Not appear on our game, on any save file. Soulmate pops up only once, and at best is buggy. Also, it does not always appear as soon as your get friendship and romance up all the way. It’s been this way since we first bought the game (disc, Sims 4 + Cats & Dog version).

@OmoskyI don’t know how it works on Xbox, but is there an option to repair the game? (That’s an option on PC.) If that options exists, have you tried it?

On computer it’s possible to have several soulmates, and the soulmate status can disappear.

@Omosky SO maybe it's more this issue than the relationship to the dolphins as such ?

The invisibility is strange though but there's a thread for this here: https://answers.ea.com/t5/Bug-Reports/NEEDS-INPUT-IL-Summoned-dolphin-is-invisible/m-p/7968490#M9355...

Katrus, not that I’ve noticed. I’ll have to take a closer look later.

Soulmate status has never left for any of ours, even if we purposely break some hearts.

Crinrict, I wouldn’t think so too if it weren’t for the tests. I’ll play around with the mermaids again and see if I can get some save files to trigger the invisible dolphins with non-soulmate sims.

I have not been able to find an in game “repair game” button.

@crinrict I’ve ran through several, randomly and newly generated, mermaid couples on new saves, who got saved right after choosing a lot, to test both sides with the same sims. The results have not changed.

Calling dolphins before the sims are soulmates with anyone:

I got invisible dolphins to show up by calling the dolphin as it was trying to leave; and when a sim got struck by lightning at the start of when calling a dolphin but didn’t finish. Soulmates still won’t trigger with any other sims though. At 100% friendship and 100% romance, the most I can get is Lovebirds.

Calling dolphins after the sims are soulmates with either each other or other sims (different tests with different random game sims):

The dolphins show up invisible from the get go, every single time they are called, and sometimes they don’t show up under relationships.

So yes, I do still believe the two are tied together somewhere, at least for our game. Otherwise, why would the dolphins show up invisible not matter what when the only change is whether the sim already has a soulmate or not? Plus considering everyone says sims can have more than one soulmate, yet is not possible on ours. Why that is, I don’t know.