Product: The Sims 4
Platform:PC
Which language are you playing the game in? Svenska
How often does the bug occur? Often (50% - 99%)
What is your current game version number? 1.61.15.1020
What expansions, game packs, and stuff packs do you have installed? All expansion packs, Dine Out, Vampires, Parenthood, Jungle Adventures, Strangerville, Realm of Magic, Luxury Party Stuff, Kids Room Stuff, Holiday Celebration Pack, Grim's Ghoulish Guitar.
Steps: How can we find the bug ourselves? Look for odd jobs. Specifically the odd job "She Sells Seashells".
What happens when the bug occurs? It's often male sims (I guess it's 50/50 for male/female) who offer the odd job "She Sells Seashells", which text refer to the sim by "she" and says that the sim is going to get a dress.
What do you expect to see? That male sims are referred to by "he" and that most of them don't wear dresses.
Have you installed any customization with the game, e.g. Custom Content or Mods? Never used.
Did this issue appear after a specific patch or change you made to your system? No

I really don't mind male sims wearing dresses (I mean, who doesn't love Morgyn Ember and other sims with tweaked gender settings?) and are referred to by "she", it's just that I think it's a bug or oversight, so I thought I should report it anyway.

I get that it's a tongue-twister, so it makes sense that the text is about a "she" since the job offer is specifically called "She Sells Seashells". (In Swedish the title isn't gendered though. It's a tongue-twister which translates to something like "Dashing Seashells Without a Chitchat") 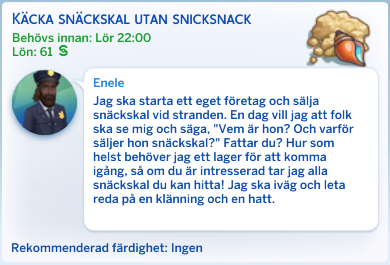 The text says that this male sim wants others to say "Who is she? And why is she selling seashells?", and then it says that this sim says "I'm going to get a dress and a hat."

So far I've only gotten male sims having this job offer, but I guess it's actually 50/50 if male/female sims offer this job.

I've also looked around the Internet (for example https://sims.fandom.com/wiki/Odd_jobs), and it seems to be like this in English too, so it's not a translation error.

I took a look, and this is intentional. Male and Female clients have different text, with Female clients saying they're going to legally change their name to Shelly.

@Bra1nBlast3d What's the text for the female clients? Are there any pronouns (in third person singular)? Anything about a dress? Because if the male clients have a text where they refer to themselves by "she" and say that they're going to wear a dress, and the female sims have a complete different text, can it be that the texts have been switched up?
Message 3 of 7 (245 Views)
Reply
0
Highlighted

@Katrus91 "Who is she? And why is she selling those seashells?" - 2 pronouns
Male: I'm off to find an outfit with a dress and a hat
Female: I'm off to legally change my name to Shelly
Message 4 of 7 (220 Views)
Reply
0
Highlighted

@kusurusu Quite odd that even though they made the texts different for female and male sims, they made both texts about female sims. 🤔
Message 5 of 7 (163 Views)
Reply
0
Highlighted

The first text isn't about female sims, but rather about a male outfit going to by a dress. It may seem a bit strange because it's meant to be whimsical, though I understand where the confusion lies.

@Bra1nBlast3d It’s not the dress part that makes it odd, it’s mainly the pronouns being “she” in both texts. I get that it’s probably because of the “she sells seashells” tongue-twister, but it looks like they’ve made an error. Because of what the male text is like you would think that the texts are the same for male and female sims (as I thought), but since they have different texts it feels like the male text should have more information about the choice of the word “she”, or something like that.

Don’t get me wrong, I think it’s fun that they play with genders and gender roles, but here it feels like they’ve left something out when suddenly every male sim offering this job refer to themselves by using “she”.
Message 7 of 7 (128 Views)
Reply
0
New topic