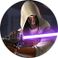 Every time after I use Sith Marauder's "Victory Through Power" skill, his saber blades returned in whirling condition. After the battle is over, the whirling blades can still be seen in the Cantina area. Playing on certain device will cause lagging until the screen freezes. I always have to restart the app after a battle that uses / facing Sith Marauder to avoid any trouble that will waste my energies. Please help to check and fix this! Sorry I'm unable to provide screenshots, but I believe your bug testing will definitely get this since it occurs using my 3 different phone / tablet devices. 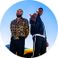 Thank you for this report. We noticed multiple reports related to Sith Marauder's lightsaber in the past (Had it myself last week), but this issue is happening very rarely and is very difficult to reproduce. May I ask you if you can remember where it happened (Raids, Arena etc.)?
If yes can you remember at what points you noticed the bug? Was it when you defeat the Sith Marauder or when one of your characters was defeated by the "Victory Through Power" ability?
Did it happen at the start, middle or end of the battle?

Below is my response:

May I ask you if you can remember where it happened (Raids, Arena etc.)?

If I'm correct, it can happen in any battle. In my experience, Raids, Arena, Galactic Wars & Galactic Challenge can be confirmed occurred.

If yes can you remember at what points you noticed the bug? Was it when you defeat the Sith Marauder or when one of your characters was defeated by the "Victory Through Power" ability?

It is at the point of using Marauder's "Victory Through Power" ability. After whirling the sabers to the target enemy, the sabers return. But instead of returning to Marauder's hands, it just stuck or whirling in front of him. Then the sabers often can bee seen whirling in the main Cantina area after the battle.

Did it happen at the start, middle or end of the battle?

With the details above, it's at the middle of the battle.

* My team setup always placed Marauder at the 4th slot position. I never tried at any other position, though.

* If I recall correctly, it is mostly happened if I target the enemy at the most left side (the enemy positioned at the back side especially).

* There is still a chance where the bug don't occurred, but almost always it occurred to me.

* Additional Note: The lagging / freezing that I experienced only happened if I use Bluestacks to play, this could be a separate issue.

Thank you for sharing your information. We tried to reproduce your report on our site on a few devices and different game modes, but we couldn't find the trigger point for this issue. We will continue to monitor the issue.

Hi, me too. Seems now the bug is less occurring.

I'll keep you posted if I happened to see some kind of pattern to trigger the bug.