Re: Unlocked and finished Heirloom is on sale at store

I too am now a victim of this false duplicates glitch.

A couple of days ago I was browsing through My Heirloom Collection, and noticed a couple with the "2" icon badge indicating I had duplicates of Pumpkin Spice Lovers and Study Buddies. For a moment I thought it odd, since I couldn't recall getting duplicates of them, but I had no reason to second-guess the game, so I promptly sold them (the only thing duplicates are good for).

I then happened to click the Info of one of them, and was surprised to see the lock icon appear, even though it appears unlocked in the My Heirloom Collection list. Also it had the strange new text "Requires 1 Pumpkin Spice Storybook" which made no sense; I already had it, otherwise how would the game have allowed me to sell a duplicate?

I keep all my heirlooms in storage, which I then ransacked - and to my horror I realized the associated heirlooms (Pumpkin Spice Storybook and Besties Study Stack) were nowhere to be found. I pulled up the All Stories -> Relationship menu on a random sim...the stories were gone. As a final desperate act I tried starting new relationships with an NPC (one romantic and one friendly to check for both); when the lists of accessible stories appeared, neither of these stories were in the lists.

I started a support ticket via the Settings -> Help menu in-game, and attached relevant screenshots of everything. I got in contact with an EA support agent via webchat, who just gave me the boilerplate, overly-general, very-unhelpful canned troubleshooting steps at https://help.ea.com/en-us/help/mobile/troubleshooting-steps-for-ios-apps/ which I nevertheless followed, even so far as to uninstall/reinstall the entire game, and surprise surprise - the heirlooms were not magically back.

Since those steps included rebooting my device (as if that could possibly have helped), I lost contact with that support agent. So I went back to the EA support site, pulled up my "case", clicked Resume, and got a second support agent. After allegedly discussing with the "game experts team", I got brushed off with the following eloquent reply:

I am afraid would like to inform you that manually we d not have option to validate the missing heirloom content and it might be some sorts of bug so I will request you to please post this issue bug on our EA forums.

As if to add insult to injury, today the featured heirloom is none other than the Pumpkin Spice Lovers. It's as if the game stole something from me and immediately wants to sell it back to me.

Here are the relevant screenshots proving I had these heirlooms. 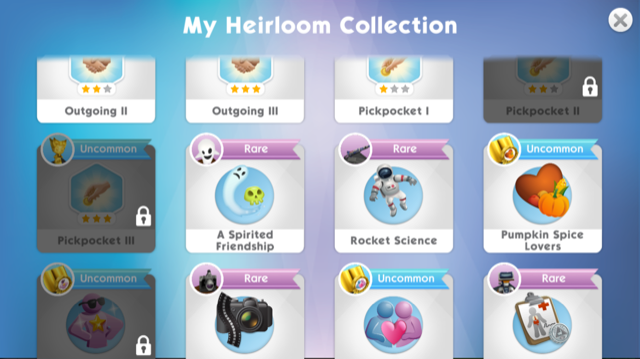 ...but suddenly locked when looking at its Info panel (this screenshot is particularly telling because you can see it still obviously unlocked in the background): 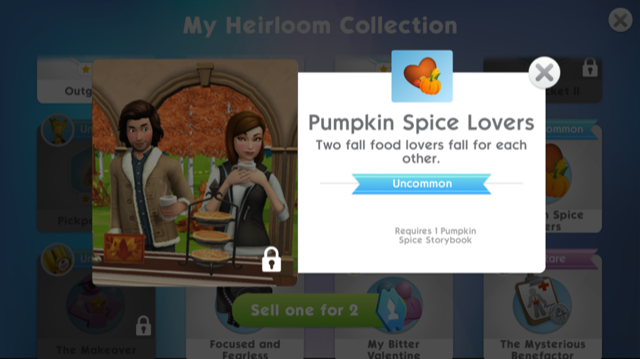 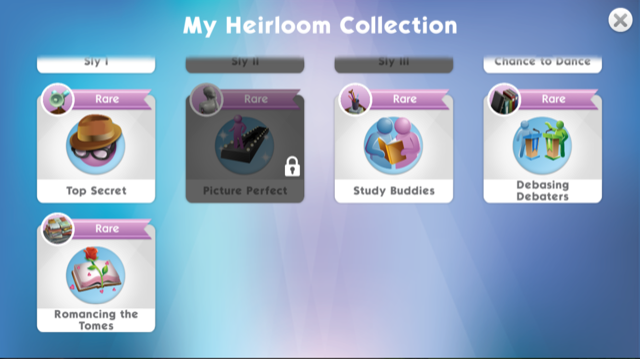 "Hah just kidding, no study buddy for you": 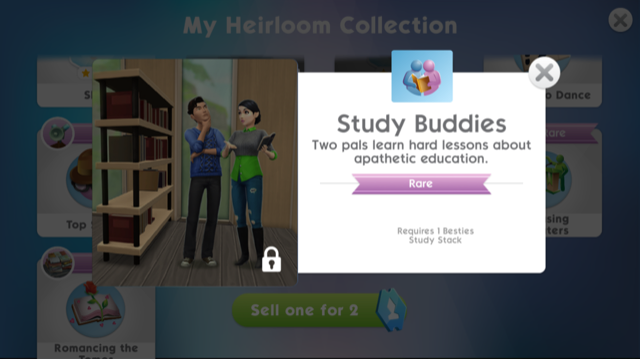 I have the Harvestfest Pie Rack, which was a quest reward alongside the Pumpkin Spice Storybook so if I have one I should have both: 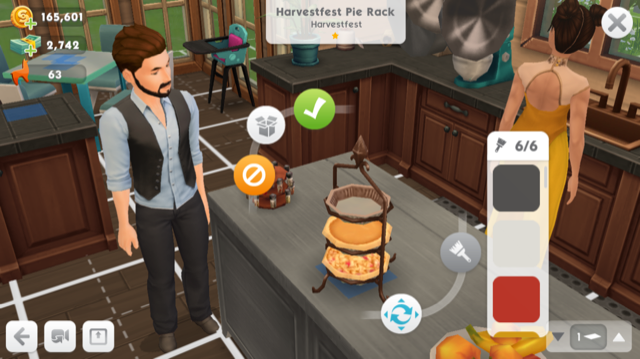 And if you need any more proof, this ought to do: I still have Large Leaf Pile, Pumpkin Spice Scented Candles, and Table of Plenty which are the story rewards from Pumpkin Spice Lovers: 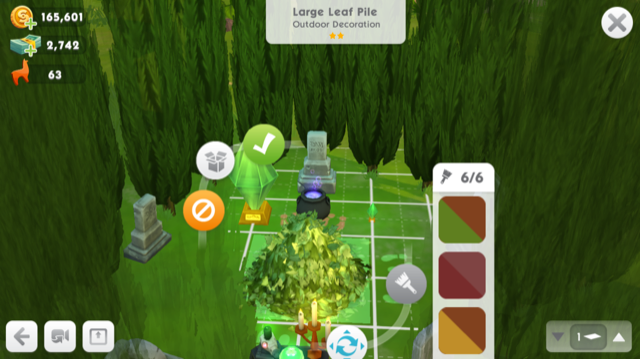 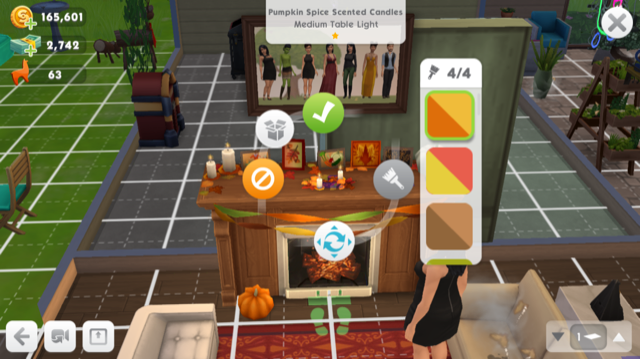 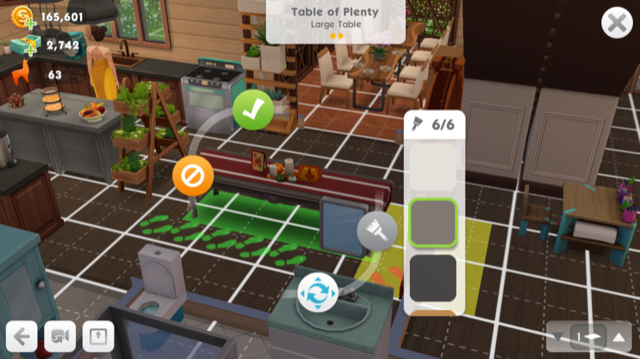 As for Study Buddies, I never finished that particular story, but I still have Rival Debaters Binders (Debasing Debaters story) and Romance Book Collection (Romancing the Tomes story); all three heirlooms were rewards from a questline, in which the Besties Study Stack (Study Buddies) was the first earned reward, so it is impossible to have the other two and not have the first one: 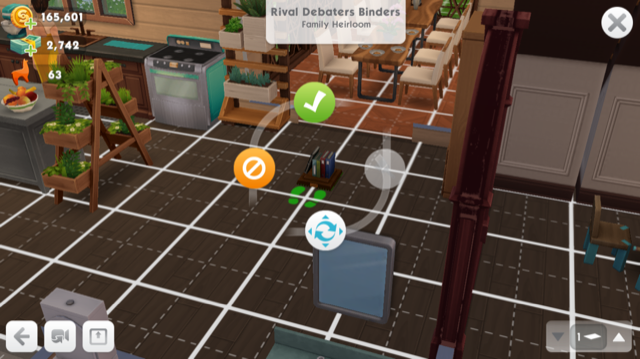 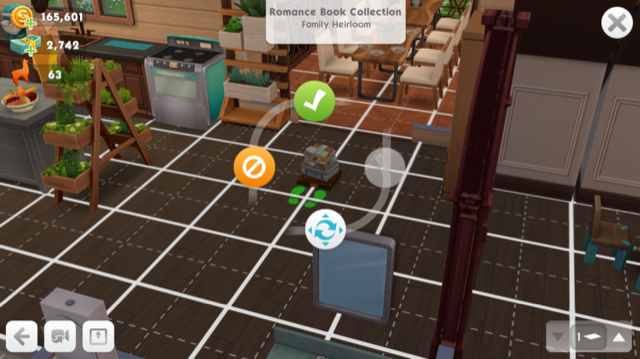 I attached all of this evidence in my EA support case, and said I would gladly pay back the 4 Super Life Tickets I got by selling these "duplicates"...but I got relegated to the forums anyway. I guess I could bite the bullet and re-buy the Pumpkin Spice Lovers (for 100 dang Life Tickets), but I won't have any way to buy back Study Buddies until the next time the Back to School event runs (and it just ran a few weeks ago for the first time in 2 years

What a nasty bug, and what a crappy way for a business to treat its paying customers (I've spent way more real money on this mobile game over the past 2 years than I'd like to admit).

I have this problem as well but with the study buddies story.  I contacted ea and they responded back that it must be a syncing issue and I should reload, this was not at all helpful which I also told them and they again responded that it sounded like a syncing problem... anyway, it looks unlocked in my heirloom collection but not when it’s clicked on. 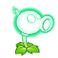 I'm also having this issue. I just contacted EA Help about it...

I wouldn't have noticed if it hadn't happened to the Pumpkin Spice Story Heirloom, but after it did I noticed I'm missing several Heirlooms/ Charms;

Here's a table of everything I should have, the heirlooms in my Inventory, and the Missing Heirlooms.

I just crafted the Pumpkin Spice Storybook in the Eco Workshop recently- The week of October 19. I took a screenshot of it in the Eco Workshop because I was so excited it showed up. I didn't take a picture of it when I completed the project because I didn't think this would happen. It still shows in the "My Heirloom Collection" Screen, but is missing from inventory.

I've attached images of my House Inventory (None of my Heirlooms are displayed in my house, they should all be in Storage)

I've also attached the screen that shows my Relationship Stories - the two stories in the table above are no longer available to my Sims.

I've also attached the screen that shows My Heirloom Collection - it shows the missing traits as there, unlike traits and stories I have never unlocked, which are just greyed out.

This post will only allow me to attach 3 files so I'll be replying with more.

Here is the image of when I got the Pumpkin Spice Storybook in the Eco Workshop.

I didn't take a picture after I had already crafted it. That was the week of October 19th 2020.

After I successfully crafted the Pumpkin Spice Storybook, I wanted to craft the Cool at the Pool Cover-Up, but I didn't think I'd be able to get enough materials from Workshop Shifts before deadline. So I crafted the Tropical Chinos in Slot 1 instead, even though I thought they were ugly.

Hopefully Ea advisors get back to me.

@nidoran1234 That's a lot of data that should help us investigate the issue. Could you PM me your Player ID so I can take a look? 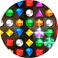 I have the same issue. I Lost there herlooms, they are missing from my storage: study buddies, debasing debates and romancing the tomes and pumpkin lovers. Please fix it!