[Open] Party guests appear on the far ends of the sidewalk

[Open] Party guests appear on the far ends of the sidewalk

Product: The Sims Mobile
Platform:Android Tablet
List the specific devices you play with (e.g. iPhone 6s Plus, Samsung Galaxy S7) Samsung p900 tablet
OS Version Android 5.0.2
Player ID: (Find your Player ID in Sims Mobile: https://help.ea.com/help/the-sims/the-sims-mobile/find-your-player-id-in-the-sims-mobile ) 1003456952676
How often does the bug occur? Every time (100%)
Steps: How can we find the bug ourselves? At my parties, the guests appear not in the house, but on the road in front of the house.  For this reason, I am having trouble giving them labels.  Also, the integrity and visual beauty of the party does not occur.  It wasn't like that before, everything was fine then.  This problem has occurred for about a few months.  Also, when I re-enter the party before the party is over, the party guests become completely invisible.  However, I can see the participants in the chat window.  But I cannot see the guests either inside the house or on the street in front of the house.  This problem started for about a month.  Finally, from the chat screen, according to one of the guests, I learned that the bo problem was just me.  The guest also asked me if no guests were seen at the party, whether there was a malfunction.  I hope you can help me with my party problem.  I have been unable to love this game that I have been playing for years due to the problems I have been talking about for several months.  I want to see my party guests in their natural state, not on the road in front of the house.  When I enter the game shortly before the party ends, I want to see them and give them their labels.  I want my party guests to see each other again.  Otherwise, I will not be able to continue playing the game like this.  It is a pity that such malfunctions appeared in the game years later.  I think I will stop playing if this bug doesn't get better.  May it be easy, good work.
What do you expect to see?
Connection Type Wifi
Please select your region Europe
Country Turkey
Additional feedback

I can't add anything because the party is over and I don't take a screenshot. Since my English is bad, I could not determine exactly what to add here.

[Edited by EA_Mai: restoring the text as it seems there was a glitch that deleted it]

For the invisible Sims, we have a bug report: https://answers.ea.com/t5/Bug-Reports/Open-Very-few-sims-visible-at-parties/td-p/8798671

Are the Sims at your parties all at the far ends of the sidewalk?

Yes. The sims are at my parties all at the far ends of the sidewalk.

Yes. The sims are at my parties all at the far ends of the sidewalk.
But when I enter a few hours later, they don't show up on the sidewalks either. Guests attending my party cannot see any other sims.
Message 4 of 8 (842 Views)
Reply
1

Hosted my first party at Edgewater and related to this issue with guests standing on the sidewalk I have to say that the enter/exit spot of Edgewater is so far behind the trees on the left side of the lot, that it was difficult to click the guests back to the party because the guests are hidden behind the leaves. 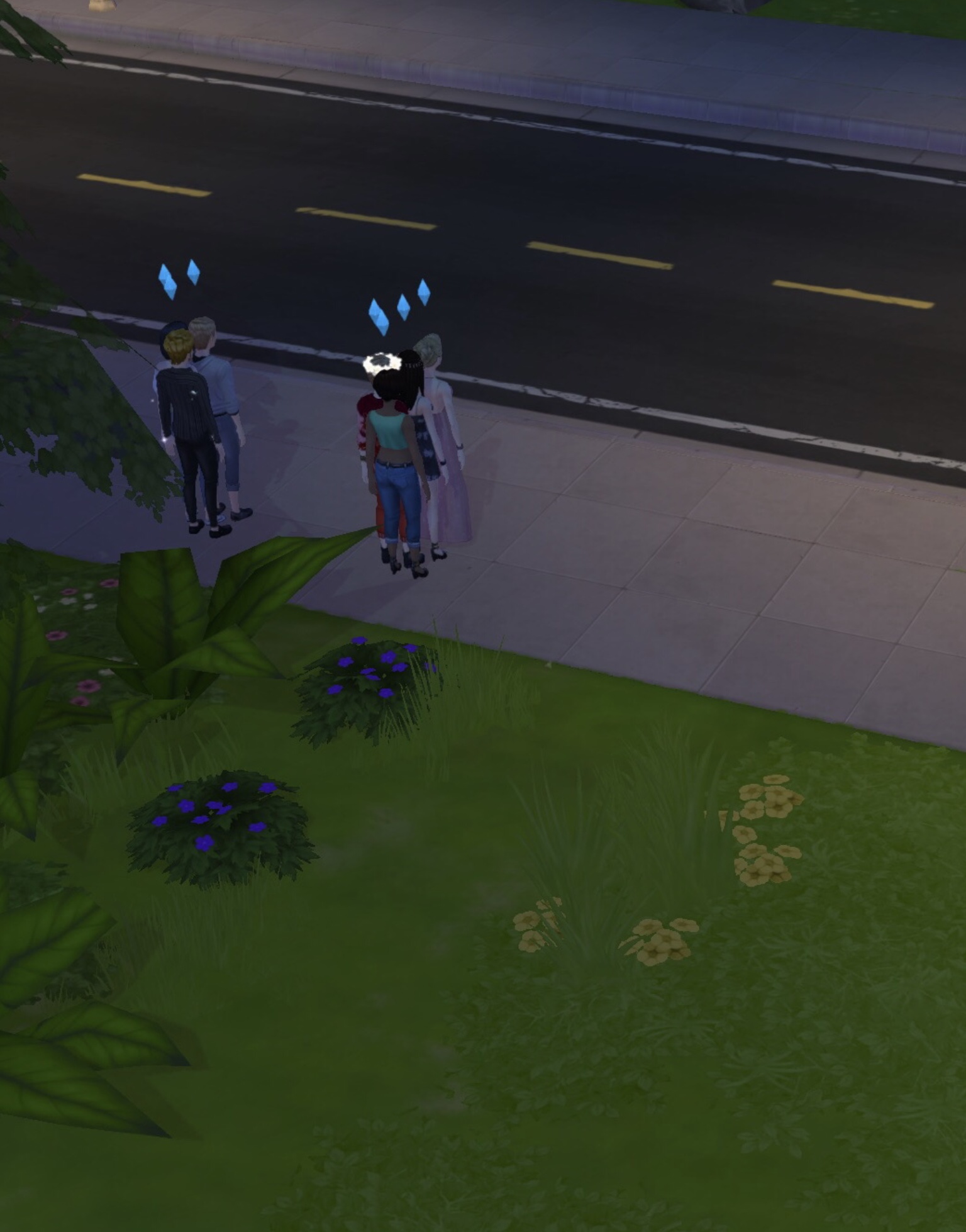 I am also reliably experiencing this issue at every party I have. Sims begin attending the party, then quickly appear in clumps at either end of the sidewalk the minute I go into a menu, an event or offline, and will stay there for 12 hours if I don’t go out there and interact with them.
I have stopped doing that. It’s been almost a year now. At my last party, and I don’t throw many anymore, I started inviting chosen Sims in through interactable items in the house and just doing relationship events. Until I realized I’ve talked in chat before, that person was possibly live. That and continuing with my backyard design. There was nothing else to do.

My parties are not advertised. At least not to my friend’s Apple Account.

No one is announced at my parties. All of a sudden there’s someone in the house, and I have to check chat later to see who it might have been. No idea if friends are showing up. I have missed even saying hello to people on my friends list before because sometimes they show up later on and I’m not checking chat.

My passive Sims show up after my first departure from my parties. Recently I had no properties but my base at Emerald, and my Sim’s infant baby showed up in his crib, alone on the second floor. He laid there, defenceless, for 12 hours while the house was open season. I did have his mother sitting with him. But I wasn’t there for most of it and that wasn’t fun at all, actually.

My interactions only go one way. I can go to an interactable item, like ‘Play Party Games With’, at the A la Mode Dining Room Table, and call in 3 Sims, but they will never interact with me. Or so it seems. I once asked a party guest to come up and talk to me at an agreed time and when we confirmed it all I’d seen was her across the room.

I am constantly transported to other locations in the house. No matter where I am, as soon as I click the pink menu to ‘make friendly introduction’ I am teletransported to another room, even upstairs or downstairs, even way across the house. This is extremely confusing when at other people’s party’s. I never know where I am. It is exactly like when you click the pink button to ‘Begin Hangout’ and you are transported to your front courtyard area. Recently this one has improved. And that’s huge. It’s been doing that for a long time and at my house I could handle it, but elsewhere, as I said, it was disorienting.

That’s all I can think of for now. Wish someone would have a look at some of this stuff. I really love this game, I do, I play it all the time, I spend countless hours decorating!! But I’m getting really tired of working around all this. Really.
@Ilois4 where is Edgewater? Is that the lot with the fountain? And also, is the hanging out on the sidewalk issue your only one, or do you have others?
Edit: I have found out from other members that the answer to that question is no, it is usually not the only issue people have.

@Angela-Angela41 You mean you take the trouble, every single time they end up on the sidewalk, to click on each and every guest and individually get them back into your house? Because that’s what I have to do. Every time. Only to have them act like ghosts. Well, no, NPCs. That’s what’s happening. Is that what’s happening when they’re in the sidewalk for you? B/c it sounds a lot easier for you. Like you just have to click one or two times. I have to do Everybody. Then I have to actively entertain them all.😔
Message 8 of 8 (302 Views)
Reply
0
New topic
Twitter Stream